Newer ideas were seeping into the industry and the 35mm SLR grew with every maturing step. Initial sticky problems were ironed out through innovative efforts from various different manufacturers. By the turn of the Sixties, the 35mm SLR camera finally became the inevitable consumer standard and in a decade from then, the arrival of electronics would forever change the complexion of the entire industry, altering camera functionality and bringing a new level of convenience, precision and built-in intelligence. And in all of these, the 35m SLR was the biggest beneficiary. 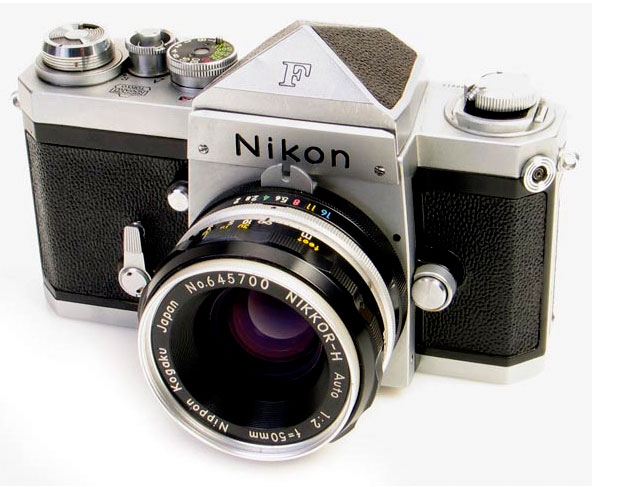 Two things happened from post-war to the Sixties that turned the camera industry on its head. One was the emergence of Nikon. This was when American occupation forces in post-war Japan soon discovered Nikon rangefinder cameras as a viable alternative to the more expensive German variants both in terms of performance and quality. Once this was established, Nikon began to flourish. And when the Nikon F was launched in 1959, the market sat up and took notice because this was the world’s first comprehensive 35mm SLR system camera that was accessible by the general public. The system featured a plethora of dedicated accessories to match the large body of interchangeable lenses and finders.

The Nikon F would go on to launch the careers of countless professional photographers, becoming eventually the reference standard in the industry. The F was particularly well known as the ‘eyes’ of the Vietnam War, bringing, for the very first time, colour images into the living rooms of every American household and adorning the glossy pages of Harper’s Bazaar and LIFE magazines.

However Nikon went even farther, establishing itself as the de facto 35mm camera for NASA’s space missions as well as all the leading sporting events and photojournalism in general. Just as the 35mm SLR platform took hold of the market, many breakthroughs became evident; a clear proof that once the industry committed itself, new technologies would become available. 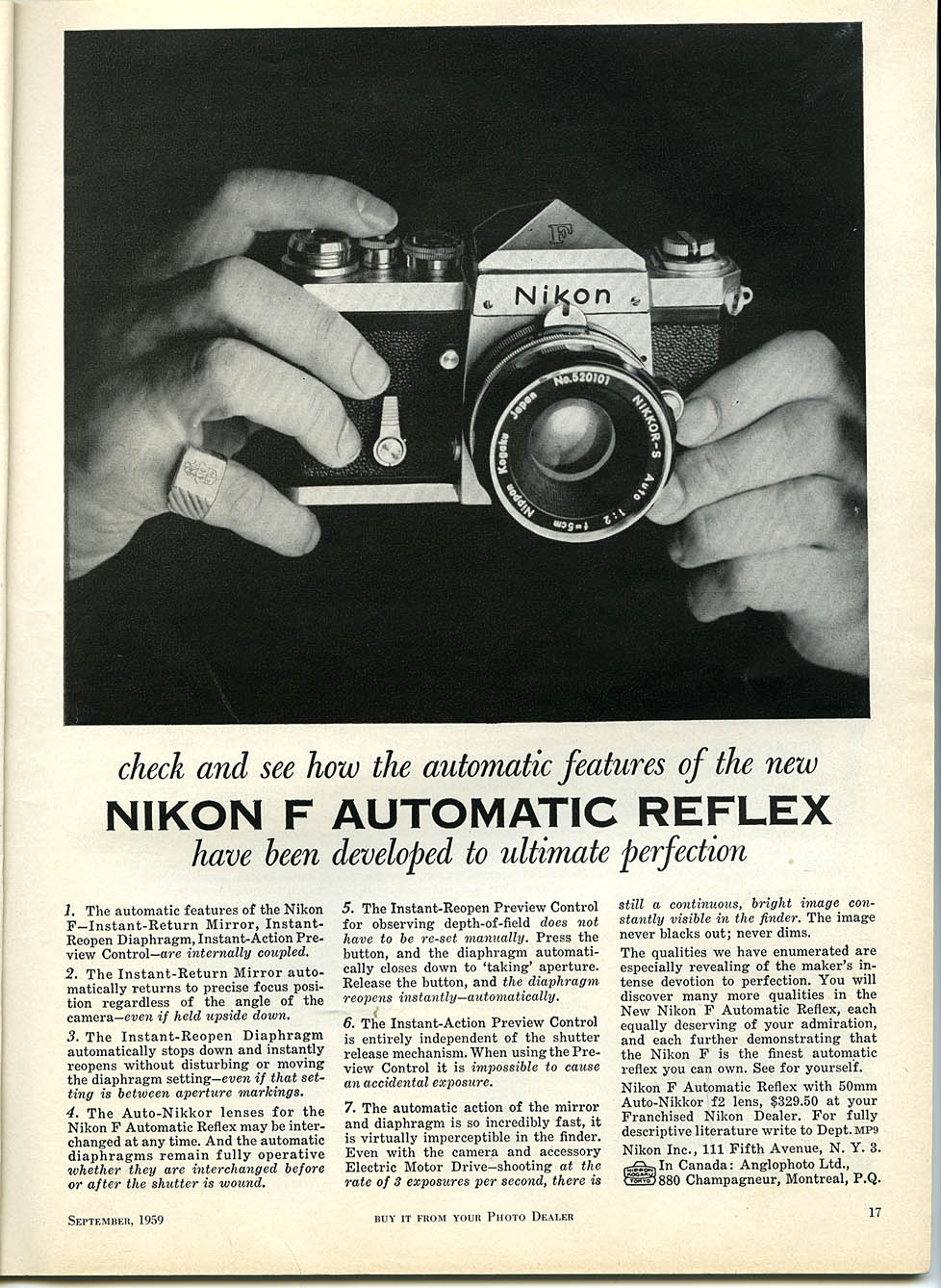 With the expansive 35mm SLR system came a whole gamut of important accessories. Robust 3.5 to 5fps motordrive arrived and so did interchangeable finders and focusing screens. Faster flash synchronisation was gradually becoming a reality as the industry moved from 1/60 sec to 1/125 and then eventually maxed out at around 1/250 second. Camera backs were now removable so that quartz-run databacks, intervalometer links and massive 250-film backs could be used.

Focal plane shutters were beefed up with a number of manufacturers moving from cloth to metal as the blade orientation became vertical. Lenses from ultra-wide to super-telephoto were flooding the market and to add further depth and variety, a host of specialist and technical lenses were also available such as shift (perspective-control), macro, microphoto (with bellows) and others. Also included were catadioptric lenses, better known as either CAT, reflex or mirror lenses, offering shorter and lighter super-telephotos with an unusual doughnut bokeh. 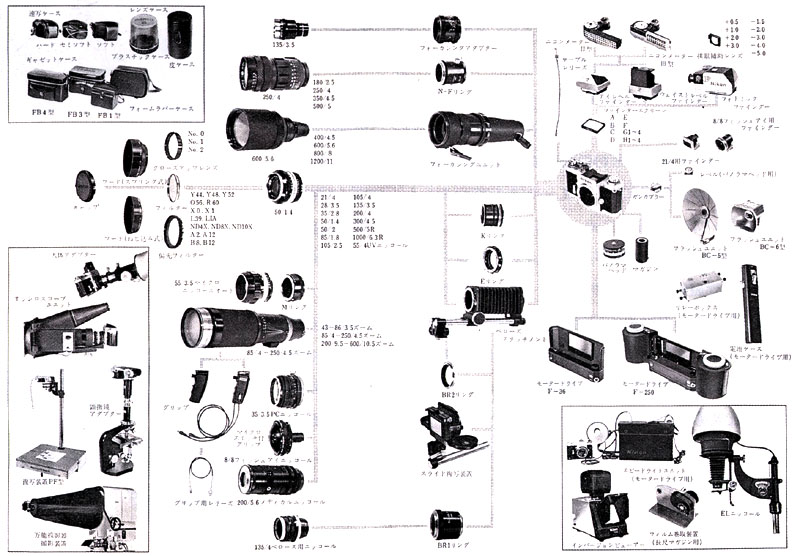 TTL (Through-The-Lens) light metering became a staple feature and a hugely popular alternative to carrying a separate exposure meter. From the rangefinder and the modern compact cameras, auto exposure modes were imported to the 35mm SLR cameras. They not only proved very useful but they were also helping to consolidate the 35mm SLR as a firm choice in the consumer market.

Cameras like the Nikon F were responsible for kickstarting the gradual decline of two prevailing standards – the rangefinder and the larger medium-format cameras. It appeared that despite their smaller size, rangefinder cameras were falling out of favour mainly because the SLR had begun to offer versatility and scalability unlike ever before. Prior to the 35mm SLR, the rangefinder’s competitors were the twin-lens reflex (TLR) and boxy SLR roll-film cameras. Both were hardly compact in comparison, which was why the rangefinder could hold its own.

With the arrival of the 35mm SLR, the rangefinder’s compact size was challenged. But in the areas of system versatility, expandability and range of accessible lenses and other accessories, the rangefinder was finally eclipsed. This collapse forced the rangefinder to shift further away, adopting even smaller dimensions while shedding its manual controls. In the process they became the compact cameras that we now see.

Autofocusing was adopted, which ended the need for the complex rangefinder mechanism, which gave the camera its name. Flash was built in. Simpler auto exposure modes were offered. Simplicity and ease of operation became its hallmark features and thus was born the modern compact camera. And in many ways, the rangefinder camera itself was all but buried alive.

Meanwhile the TLRs and boxy roll-film SLRs suddenly found themselves edged out as well. Although they held a huge advantage over the clumsy view cameras, the 35mm SLR proved that they themselves were far too large, too awkward to use and too slow and cumbersome. And compared to anything else before it, they were also comprehensively outdone when it came to the breadth of lenses, options and accessories. When all was said and done, a large film size was not enough to hold back the tide of change. 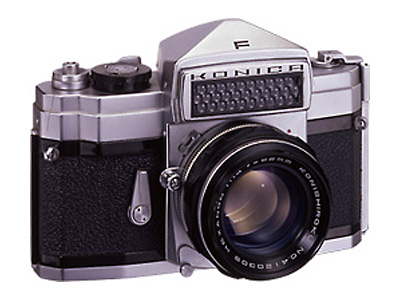 By the end of the Fifties, Konishiroku (later called Konica) successfully breached the common industry barriers, registering a super-fast 1/2000 second top shutter speed and also a very impressive 1/250 second flash sync setting. To achieve these, the Konica F (1960) adopted a dual curtain design where the time taken for the gap between the first and second (curtains) to travel across the focal plane defined the actual shutter speed thus changing the 35mm SLR camera shutter design forever. 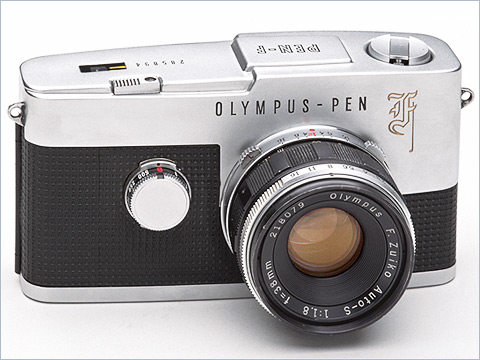 Three years later Olympus stunned the industry – and the market – by launching the Pen F (1963), the world’s first half-frame 35mm SLR camera capable of 72 24 x 18 mm frames in a single 36-exposure roll. However this alone was not the full story – after all the company had already released the original Pen six years earlier. The Pen F on the other hand was a true SLR, utilising an unusual porroprism finder with a side-ways optical relay viewfinder, an ultra-light and unusual titanium rotary shutter plus a huge array of system accessories including some of the most enviable high-performance interchangeable lenses. The fact that these lenses have now come a full circle is perhaps a testimony to the company’s craftsmanship because many have rediscovered their value when used with today’s Micro FourThirds (2009) cameras.