My brother and I had some time off so we decided on a short trip across to South Australia to see what was around.

Although I took a lot of camera equipment, this was not going to be a photography trip in my leisurely pace where I get to drive around slowly looking and letting my eyes search for nice concepts that reflected my mood at the time and the ambiance of the environment.

No, this was more a reconnaissance trip at speed with very few stops and no more than 1-2 minutes at a stop for photos.

For a change, I was a passenger which allowed me the considerable advantage of checking out the scenery but the frustration of not being able to stop to explore and take it all in.

The weather for the trip proved quite unseasonal after a record breaking heat wave in south-eastern Australia earlier in the month (November 2009) when Adelaide had about a week of daily temperatures above 35degC and once day when temperatures hit 47degC in rural South Australia, the weather for the trip was dominated by a massive low pressure system and an extensive cold front which resulted in flash flooding and road closures, particularly in the Flinders Ranges.

Importantly, the passenger seat in my brother’s recently acquired used Range Rover was extremely comfortable – and it needed to be – there was a LOT of driving and thus sitting to be done in the 5 days of driving.

We set out from Melbourne, headed north and after a toilet stop at historic gold mining town of Wedderburn, and a quick lunch at a cafe in remote Sea Lake, we passed through Mildura and decided to head onto Renmark in South Australia – a total of 680km for Day 1.

Renmark sits on the Murray River system and is dominated by 1000’s and 1000’s of acres of irrigated vineyards supplying 3 times more grapes than all the other vineyard regions of South Australia and Victoria combined!

After a bite at the local Renmark Club, we found a cabin to rent for the night at the local caravan park and as it was nearly sunset and the clouds were looking like they might produce a nice sunset we quickly headed up to a vantage point to watch the sun go down on a long day dominated by over 500km travel through wheat fields punctuated by areas of Mallee shrub and Riverina vineyards and fruit trees. 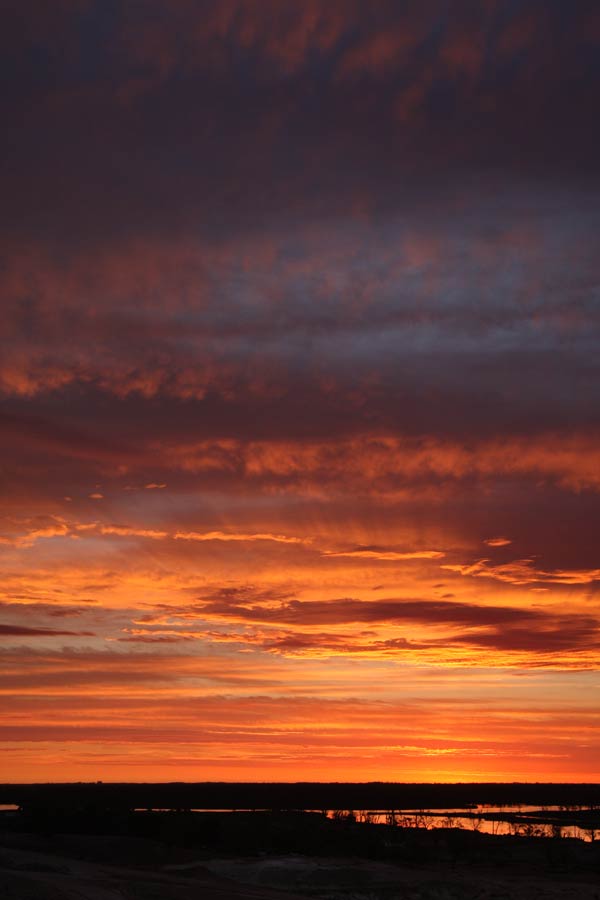 The sunset photos were the first and last time for the trip I could be bothered getting my Canon 1D Mark III camera out – this was shot with the Canon EF 24-105mm f/4 IS L lens.

I quickly decided that the Panasonic GH-1 Micro Four Thirds camera with HD 14-140mm lens was the best choice for this trip – easy to quickly get set for a photo at 110kph, faster autofocus than the Canon (as long as it is set to AFS and not AFC), ability to adjust image aspect ratio, 10x zoom, small enough that you don’t keep hitting the lens on the window, or knocking the driver unconscious, and perhaps the most fun – the autofocus HD video mode.

Of course, if I had time to wander around taking architectural shots, the Canon with tilt shift lens would come in handy, likewise if I wanted to do some really nice shallow DOF shots with the 135mm f/2.0 L – but neither of these situations eventuated in the little time I had – so it was to be that the GH-1 was used for 99% of the remaining shots (1% was Olympus E510 with ZD 50-200mm lens).