Macrophotography with the Micro Four Thirds – what options do we have?

This post is an attempt to answer one of my reader’s questions on whether to buy a GH-1 for dental macrophotography.

As popular as the Micro Four Thirds cameras have been in 2009, the system is still very young, and one area that is yet to be developed adequately is macrophotography.

Micro Four Thirds allows you to embark on either an expensive auto-focus route with the Leica-D 45mm f/2.8 macro lens, or an extremely large range of very cheap but high quality, legacy manual focus macro options.

There is only one dedicated AF macro lens available for the M43 system at present – the expensive Panasonic Leica-D 45mm f/2.8 OIS MFT lens which is a very nice lens with focus range limiter and allows one to image a subject size 1/4 that of a full frame film, but its lack of focus scale makes manual focus more difficult than with other macro lenses.

The Olympus Four Thirds ZD 50mm f/2.0 macro lens, although one of the sharpest lenses ever made, it will not AF on a Panasonic M43 camera, and will AF slowly on an Olympus M43 camera. This AF issue also applies to the cheaper Olympus ZD 35mm macro lens for Four Thirds.

The Olympus SRF-11 Ring Flash for Four Thirds has a FR-1 adapter for the Olympus Four Thirds ZD 50mm f/2.0 macro lens but it is 1mm too wide to attach to the Panasonic Leica-D 45mm macro lens, and is quite a large flash to use on the small M43 bodies – but you do get TTL exposure and it is a lovely ring flash with full circumferential flash unlike the Canon ring flash.

The 14-140mm lens will have difficulty with AF inside the mouth given its f/5.6 aperture (I have tried that!)

The GH-1 will not allow TTL flash with legacy lenses – seems it needs to know what the aperture is and works on the assumption aperture is ~f/2.8, furthermore flash exposure compensation with legacy lenses gives strange results – please Panasonic fix this up with a firmware update! Fortunately, you can easily set the Ring Flash to a manual output setting (you can’t do this with the built-in flash though!).

From dpreview.com’s review of the Panasonic 45mm f/2.8 macro lens:

“On Panasonic G-series models, the 45mm becomes capable of something that’s simply not possible with any DSLR system – genuinely usable autofocus when shooting macros. These cameras allow you to choose an extremely small AF point and place it wherever you like within a large area of the frame (although not at the extreme borders). This means you can tell the camera to focus precisely where you want within your composition, and it will just do it without any fuss – it’s a very useful tool indeed.”

Most photographers who are serious about macro work do not use autofocus but use manual focus – often setting the lens to a given magnification setting (ie. a focus point), and then move the camera in or out from the subject until focus is achieved.

Autofocus is generally a challenge in macro work, particularly when the subject is not in a plane parallel to the camera, and in the low light levels inside someone’s mouth, and where there is low contrast such as on mucosa or teeth, combined with specular reflections of the light source.

Thus, the lack of AF macro lenses is not a big deal.

The absence of a mirror means you have much more efficient access to accurate manual focus and you can choose any area of the screen to magnify, plus you don’t have to worry about vibrations of the mirror and having to use mirror lock up for each shot at high magnification.

For instance, to see how easy and accurate it is to manually focus with the Olympus ZD 50mm f/2.0 macro lens on a Panasonic GH-1:

The M43 cameras allow you to use a wider 16:9 aspect ratio which may be more applicable to cosmetic dental photography.

The EVF or LCD means that even if you stop down a lens, your viewfinder does not become dark as it would in optical dSLR viewfinders.

If you use the GH-1 on a tripod, you also have the wonderful advantage of the flip out swiveling LCD to make your life that much easier.

This means you have access to using almost every macro lens ever made with or without extension tubes or bellows or teleconverters.

For example, you can pick up an excellent Olympus OM 50mm f/3.5 macro lens on Ebay quite cheaply, and as this is a legacy lens, it has magnification markings (although you will need to double these for the 2x crop factor).

If you are going to routinely use the same magnification, then manual macro flash photography becomes a LOT easier and you could even use a Canon Ring Flash on your M43 camera in manual mode, and attach it to whichever lens you wish to use via the appropriate filter adapter – see using Canon flash on M43 cameras here.

If you have the Olympus Ring Flash, it can be used without an adapter for a lens by holding it as the lens sits inside the ring, and of course you will have TTL auto exposure, even if using legacy macro lenses (as long as you use an Olympus M43 camera as TTL on Panny’s seems to assume lens is set to f/2.8!)

The hopefully near future:

I posted a blog in August 2009 suggesting that it was time for Olympus to revamp their macro system, in particular, a faster focusing 50mm f/2.0 macro lens for Four Thirds – in fact, Olympus has announced a M43 50mm macro lens will be available in 2011 – hopefully a f/2.0 so it can be used as a portrait lens as well, and a more compact macro ring flash kit with ability to adapt onto M43 lenses.

Although neither Olympus nor Panasonic have announced a new Ring Flash for M43, I am sure it can’t be too far away, presumably it is more likely to be 2011 than 2010.

In the meantime, there are many options to consider, and the many Canon dSLR users who have adopted M43 as their 2nd camera system will be thankful that their Canon flashes can be used without modification on a M43 camera – albeit only in manual mode.

What options now for dental work using a Panasonic GH-1?

Option 1 for AF  and  TTL flash but need to hand hold the ring flash:

Option 2 for MF only and TTL but no need to hand hold the ring flash:

Option 3 for good quality on the cheap, manual flash and hand hold the ring flash:

Option 4 for good quality on the cheap, manual flash but no need to hand hold the ring flash:

NB. of course, you may find the cheaper Olympus E-P1 is adequate for your needs instead of a GH-1, in which case you will get some slow AF with the ZD 50mm macro and you will also get image stabilisation for non-flash uses, and presumably you will get TTL external flash even with legacy lenses (unlike the GH-1 but I have not tested this on the E-P1). 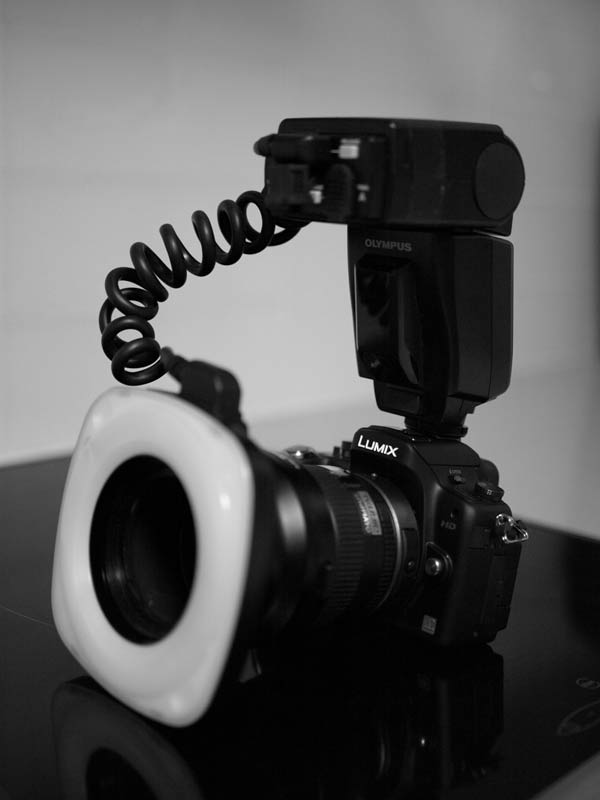 Finally, Metz offer a Mecablitz 15 MS-1 Slave Ring Flash which is compatible with Olympus and Panasonic Four Thirds wireless TTL, however, as no M43 camera yet has remote TTL capability you may need to resort to also using its 6 level manual output control and either an in-built or external flash to trigger it optically (I presume that is what is meant by Slave Flash with pre-flash suppression). It has adapter rings for 52, 55, 58, 62, 67, and 72mm filter threads.