The 70-200mm f/2.8 lens is perhaps THE must have lens for many professional photographers.

Although not quite as sharp and aberration free, and MUCH bigger and heavier than a high quality prime lens such as a 135mm f/2.0 or 200mm f/2.8, its wide aperture and zoom combined with image stabilisation allow the pro photographer much more versatility and freedom to capture the shot they want.

Another major problem with the 70-200mm f/2.8 lens size is that it forces you to limit your camera bag choice to the traditional camera bag which means you need to take it off your back, set it down and then access your gear – not my style at all.

And, of course, on my Olympus dSLR, I have the beautiful Olympus ZD 50-200mm f/2.8-3.5 lens which gives me more telephoto reach and macro performance than the available 70-200mm lenses for Canon, Nikon or Sony.

The legacy 70-200mm f/2.8 lenses from the film days, as excellent as they were then, have now been found wanting when mated with the new high resolution full frame digital SLRs, and thus the manufacturers have released new versions of these over the past couple of years.

The main reason for having a 70-200mm f/2.8 lens is to use it at its widest aperture to give you nice background blurring and bokeh while still giving a sharp subject which will hopefully pop out at the viewer.

Thus in the table below, I will only be using dpreview’s data at f/2.8:

For further comparison, the Olympus ZD 50-200mm f/2.8-3.5 SWD lens, is also weather-proofed, has a tripod mount, has 3-4EV IS via in-body IS on most Olympus dSLRs, is MUCH cheaper (~$US1000), is MUCH lighter (1kg not 1.5kg), is shorter (a manageable 15.7cm instead of 20-22cm), uses a smaller, cheaper filter (67mm not 77mm), has 9 rounded diaphragm blades for nice bokeh, and has more than twice the macro performance and twice the telephoto reach (can even use it hand held at reach of 800mm f/7 with a 2x teleconverter), making it MY preferred zoom lens.

Some examples of my photos taken with the ZD 50-200mm lens are here and with a 2x TC are here.

Of course, Olympus users also have the option of the superb but expensive and heavy Olympus ZD 35-100mm f/2.0 lens which, in 35mm full frame terms, gives the focal length reach of a 70-200mm lens but light gathering of an f/2.0 lens and depth of field of an f/4 lens- which at maximum telephoto is perfect for most situations.

Furthermore, it should be pointed out that high quality prime lenses are even better than the zoom lenses for optical image quality – for example, the new Canon 100mm f/2.8L USM hybrid IS macro is even sharper than the previous sharpest lens tested on dpreview (the Olympus ZD 50mm f/2.0 macro), and wide open at f/2.8 it gives MTF 50 of 2000 in the centre and 1500 at the edge with a CA < 0.03%, 1.7EV light falloff and only trivial pincushion – easily beating any of the 70-200mm zooms.

Here is a delightful, quick candid portrait I snuck in while this young lady was having her face painted at a cricket match – taken with the Canon 1D Mark III with EF 135mm f/2.0 L lens and 1.4x TC for very shallow DOF – actually, too shallow for portraits, but didn’t have time to close the aperture down a notch or two (my ZD 50-200mm was attached to 2x TC and my Gh-1 on a tripod in the stadium taking shots of the cricket game): 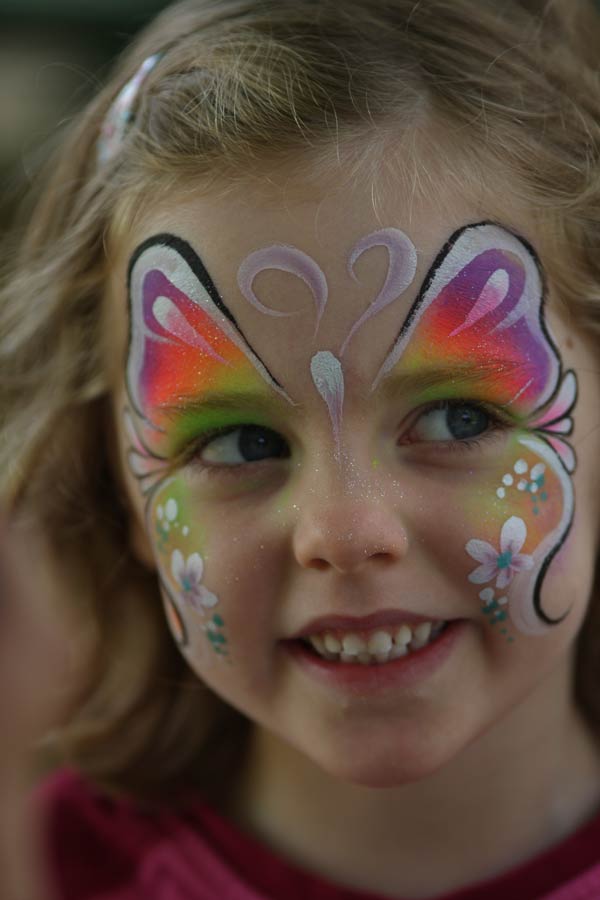