I have been lucky enough to have owned this unique lens for over a year now.

Olympus rate it as part of their super pro series and it is expensive, relatively big and heavy (780g) for a wide angle lens, weatherproof and as usual for Olympus pro lenses has a circular aperture diaphragm.

This lens is an amazing piece of work, feels well built and works very smoothly, although the large convex protuberant front lens makes one anxious that you will damage it if not being careful. But it does have a very nicely fitting metal lens cap which just slides on with precision and stays on.

This lens is approximately equivalent to a 14-28mm lens on a 35mm camera giving it the equal widest ultra wide zoom lens available for any digital SLR. The lens is not a circular fisheye but a rectilinear lens which means it will keep straight lines straight when they are parallel to the sensor plane.

It has close focus to 25cm (just under 10 inches) and when used at 7mm focal length at f/11, the depth of field includes 21-37cm when at closest focus, and an amazing 26cm to infinity depth of field when focused at 40cm.

For maximum resolution, it should probably be used at f/5.6 as diffraction impairs resolution of lenses on Four Thirds sensors at f/8 or smaller. So at focal length of 7mm and aperture of f/5.6 and a focus point set to 0.7m you should have depth of field from 40.5cm to infinity, still very impressive.

When used on a camera body with IS built-in, is the ONLY ultra wide zoom digital SLR kit with image stabilisation capability. Now many will say that IS is not needed on a ultra wide angle lens but in practice, IS further pushes the creative boundaries that can be achieved with this lens as it can be hand held at shutter speeds down to 0.5sec at is widest zoom and still achieve sharp images.

Now why would anyone want to shoot hand held at 0.5sec?

Well it becomes VERY handy for a range of situations including: 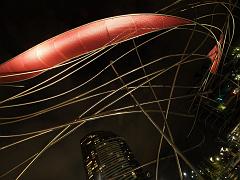 This image was taken hand held, above my head, in light rain (remember this lens is weatherproof), on a cold Melbourne night with IS on at 0.5 sec shutter speed!

BUT you say, you could do all this even better on a tripod?

Unfortunately, tripods are very difficult to use well with an ultrawide lens even if you took the trouble to bring one with you. Composing images with ultra wide lenses usually means camera position and angle is critical to good results and moving a mere inch or so makes a great difference. This becomes frustrating on a tripod, and often the tripod will not allow you to be positioned where you need it – either very close to the ground, above your head, through objects, or suspended over water fountains, etc.

Now, at these strange camera positions needed, Olympus makes your life MUCH easier by allowing you to avoid breaking your back or embarrassing yourself if you have a camera body with either a hinged live AF LCD view such as the Olympus E330, or a rotating LCD with non-realtime AF such as with the Olympus E3.

As I don’t own the E3, one of my favorite walk around outfits is the 7-14mm mounted on an E330 and the 50-200mm mounted on my E510 – these two kits combined make for a lot of creativity and just shear fun without being too much of a weight burden.

This combination of high quality ultrawide angle with image stabilisation down to 0.5sec hand held shutter speeds, ability to compose with camera in strange positions via LCD and weatherproofing all means that you have a unique tool that is ONLY possible with the Olympus Four Thirds system, and soon will also be possible with the Four Thirds Micro system with a silent camera body and movie mode hopefully up to 1200fps – now if you can’t get creative with this there is something wrong!

The main downside with this lens apart from expense, weight, size is that inability to use filters, although this is not a big issue as the convex front lens seems to create a polarising effect and this lens is not really designed for landscape panoramas with gradient filters (you would be better off trying the Olympus ZD 11-22mm for architecture and landscapes) but rather as a close up creative lens. In addition, you need to take care that light sources do not hit the front element which may cause potentially unwanted flare points.

If you can’t afford this lens, then Olympus are producing a consumer ultrawide zoom lens – the ZD 9-18mm which will give a 35mm coverage of ~18-36mm which will suit most people and will allow the use of filters for landscape work.

One of the main problems with ultrawide photography is not getting everything in, but keeping distracting elements OUT, hence the need for very careful selection of camera position, angle and focal length. Elements in a photo that do not add to the photo only detract from it and should be removed from the composition, and this can be very hard with a ultrawide which tends to get everything relatively sharp due to its wide depth of field.

Furthermore, when used to image people, it will exaggerate features while making people either fat or thin depending on their position in the frame, the result is rarely flattering (see my comparison of lenses used in portraits) but can be very creative as shown in this image taken of statues only inches away: 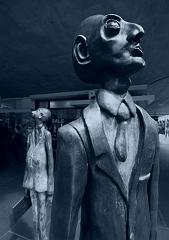 One thing I would have loved to have been able to do is use the Olympus ring flash on it, but alas it doesn’t fit, although you can hand hold the ring flash next to the lens but this defeats the purpose of an encircling ring flash to give relatively shadowless images.

This is one fun lens to play with!