Pre-Raphaelite art and photography exhibition at the National Gallery, Washington

AMENDMENT: my apologies for any confusion, I had initially assumed this was in Canberra not Washington as the website address was nga.gov and my brain must have wanted it to be nga.gov.au, thanks Tim for letting me know!

The national art gallery in Washington is hosting an exhibition displaying works of Pre-Raphaelite art and photography which is primarily British  works made soon after the invention of photography in 1839.

If you can’t get there before it closes January 30th, 2011, or if you would like to read more about these works and see some examples online, check out their slideshow here.

“As photography gained a foothold in the 1840s, John Everett Millais, William Holman Hunt, and Dante Gabriel Rossetti formed the Pre-Raphaelite Brotherhood. These young painters and their followers wished to return to the purity, sincerity, and clarity of detail found in medieval and early Renaissance art that preceded Raphael (1483–1520). But they were also spurred on by the possibilities of the new medium, which could capture every nuance of nature. Indeed, Pre-Raphaelite artists painted with such precision that some critics accused them of copying photographs.

Many photographers in turn looked to the language of Pre-Raphaelite painting in an effort to establish their nascent medium as a fine art. Both photographers and painters—many of whom knew one another—drew inspiration directly from nature. In choosing subjects, they also mined literature, history, and religion, as well as modern life. Together they developed a shared vocabulary that is explored in this exhibition through the genres of landscape, narrative subjects, and portraiture.”

Here is the first image of the slideshow – Millais’ “A Huguenot, on Saint Bartholomew’s Day, Refusing to Shield Himself from Danger by Wearing the Roman Catholic Badge”, 1851–1852, oil on canvas, The Makins Collection”

In contrast, many of Raphael’s highly idealized, complex frescoes can be seen at the Vatican such as the 847AD Fire in the Borgo, Rome painted in 1514 which I took the following photo of last month while I was visiting the Vatican: 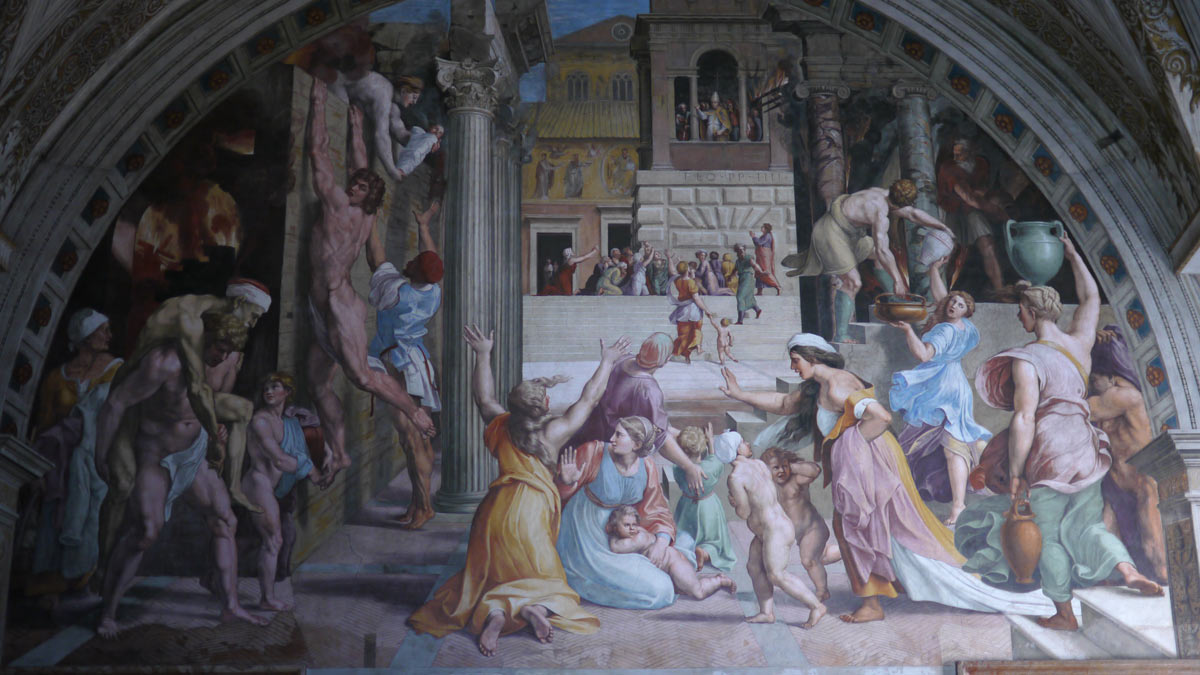 More of my photos of the Vatican art works can be seen here.