Tips for better Christmas party indoor photos – all you need is a Micro Four Thirds camera, pancake lens and a flash

Indoor Christmas party photos can be a very trying issue for the social photographer.

Sure you can use a point and shoot digital with its built-in flash and get the usual shots, but what about aiming for a bit more flattering portraiture without taking a studio lighting kit with you?

My favorite indoor party camera kit is the following:

Now, the above kit could work well without the flash even indoors IF you have nice flattering lighting for your portraits such as window light or a light hitting the face at a 45deg angle.

More often than not, venues will have very unflattering and often quite dim lighting – downlights are among the worst for flattering portraits unless you position your subject very carefully indeed.

Faced with difficult lighting, your best option for easy to achieve nice portraits indoors is to put a nice powerful flash on your camera and swivel its head so that it bounces off the cornice region of the wall behind you or to the side of you. BUT you do need relatively light and relatively colour neutral paintwork to bounce off – if its is natural wood panels, forget this option!

Set your camera for bounced flash:

Here is a QUICK impromptu snap of my friends using this method at f/1.7 using the Panasonic 20mm f/1.7 pancake lens – my “party lens”: 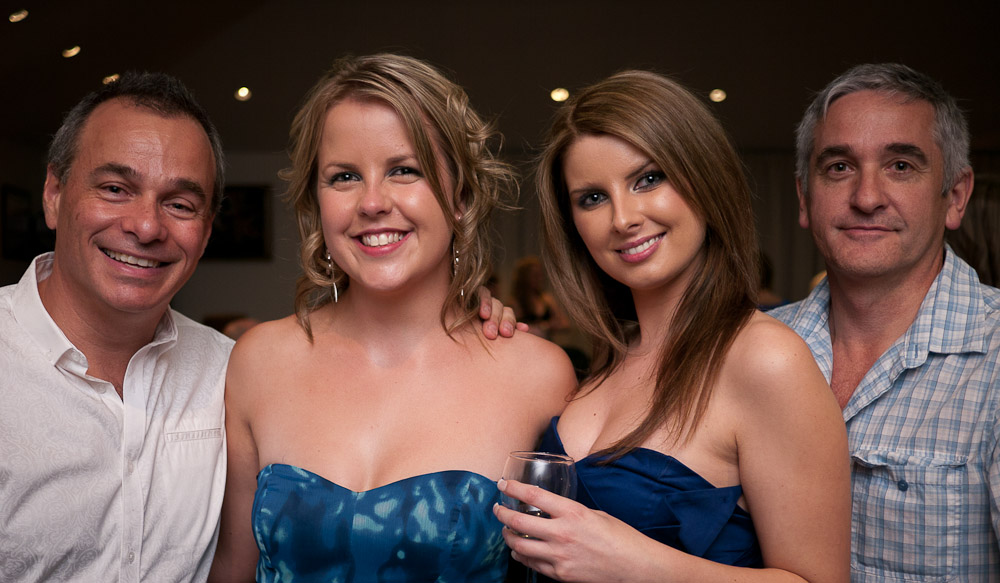 If you are using a wide-normal lens like the 20mm f/1.7 pancake, avoid getting too close to your subjects as this will cause unflattering distortion making their noses appear larger than they are, etc, so stay at least 1.5 – 2m away, and if need be, crop your images later.

Also be careful of arms coming towards you such as resting on a chair, as these will also gain an unflattering distortion.

Your friends will be blown away with the quality of your photos – far better than point and shoot cameras with inbuilt flash and as good as dSLRs.

They will then likely say wow, what camera did you use to take those with – instead of saying what a great photographer you are – but that’s life – people treat photography quite differently to music – they would not dare say, wow, that sounded great, what brand piano did you use?

If you do not have an external flash, then you will have to settle for harsh, direct on-camera flash in the same manner as a point and shoot shot – just use the above settings but DON’T FORGET to POP UP the built-in flash!

Then once everyone realises that you are a brilliant photographer capable of making them look good, inevitably you will be asked to do the group shot.

Now, in a dim room, with downlights, a group shot with minimal equipment could be hard to pull off well.

But not with the above kit and a bouncable ceiling, a great photo is easy to achieve, just step back far enough to get everyone in making sure that your flash can aim at the ceiling well in front of the group (you may need a decent flash for this or increase your ISO and open your aperture to get enough light from your flash).

What happens when you use other exposure modes on a Panasonic GH-1 in low light indoors?