Today was the 1st day I had the opportunity to take my new Olympus OM-D E-M5 Micro Four Thirds camera for a walk in the city.

It was a heavily overcast, wet day, and I decided I would catch the train in, leave my backpack at home, and carry my camera kit in my jacket pockets as well as carry a full size umbrella, just to see how it would go.

I could easily have also taken the Olympus 14-42mm collapsible kit lens in another pocket, they are all so light and compact.

I must say, this was the 1st time, I have been able to carry 3 lenses and such a high quality camera with me in my jacket pockets and would-be assailants would be none the wiser!

I have just downloaded Lightroom 4.1 RC so I could play with the Olympus RAW files, and being late at night now, I decided just to upload one untouched file other than being opened in Lightroom and resized and compressed for the web, and this is the one below top demonstrate how fantastic the hand holdable low light capabilities of this camera.

For this shot it was about 3 hours AFTER sunset, in the middle of a very dark alley, looking through my 12mm f/2.0 lens in the EVF the image was dark as the light levels were BELOW what the EVF is designed for (I didn’t put the Live Boost on, nor resort to iAUTO, both of which would have made the EVF brighter). The wall was lit by a distant lamp.

I was hand holding the camera at the end of a cold walk in the night air (~10degC), and the camera had no problems rapidly autofocusing on the graffiti on the wall even though it was so dark (I have the AF illuminator OFF as well !!).

So here is the untouched shot to give an idea of how sharp it is at f/2.0, ISO 800 and exposure 1/2 a second hand held – yes you read correctly half a sec hand held!!

Of course, I could have bumped ISO to 1600 and allowed a more reliable 1/4 sec exposure, but here is my one and only attempt at half a second on this shot before I caught the train home:

WARNING: this photo is NOT meant to have any artistic or photographic merit other than to show half-second hand held photos ARE possible! 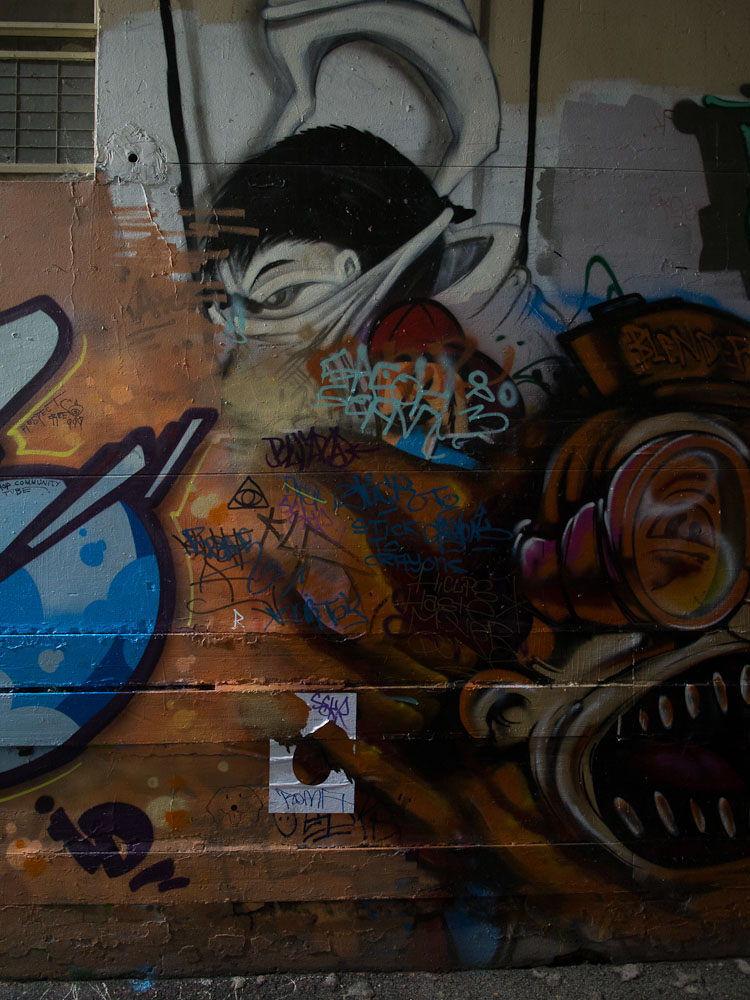 When you can hand hold shots at 1/3rd a second reasonably reliably, it means you can get reasonable night street shots with moving headlights, as well as being able to do moving water shots such as waterfalls in case you forget your tripod.

For hand holdable low light wide angle at 24mm focal length in 35mm terms with AF, you just can’t do this with a Nikon or Canon cropped sensor dSLR to this degree and for this price.

For a start neither Canon nor Nikon make a 24mm equivalent prime lens for their cropped sensor dSLRs so you have to go for a zoom lens at f/4 (f/2.8 if you go Sigma), or the super expensive 14mm f/2.8 pro lens would be the closest prime, and in neither situation do you have image stabilisation.

And don’t even think about even putting the lens in your jacket pocket let alone a camera and 3 lenses.

When I was walking around and it was lightly raining, I just turned the camera with the lens downwards as these lenses are not weatherproof like the E-M5.

I just wish Olympus did not follow Canon’s lead and put a stupid ON/OFF switch at bottom rear of the camera, as I had to use 2 hands to turn it on, while for the most part I could just walk around and control everything with my right hand while my left hand held the umbrella up.

The other tricky time is trying to change lenses in the wet, it would be nice to have a 3rd hand as I was always worried I might drop one of the 3 items I was juggling.

Wouldn’t it be nice if Olympus made all these components TOUGH like their compact camera series!!

Very happy indeed so far with this camera.

It has its foibles but it is such an amazing camera for its size and the lenses are just so lovely, and the AF so fast, the foibles are insignificant in comparison.