I was asked if I would do a review of the Kitvision iPhone 5 / 5S lens pack.

Now I a must admit I am not a big fan of iPhone photography as the image quality and capabilities are no where near what my Micro Four Thirds gear can achieve, and I take my Olympus E-M5 with me nearly everywhere including to parties, so I do not have great need of using my iPhone 5 as a camera.

Nevertheless, not everyone is as lucky as I am to own a Micro Four Thirds camera and a few of their lovely little lenses, so I decided to agree to testing these 2 iPhone lens attachments out, just to see what they could do.

The KitVision lens pack comes with:

Essentially this is what you get: 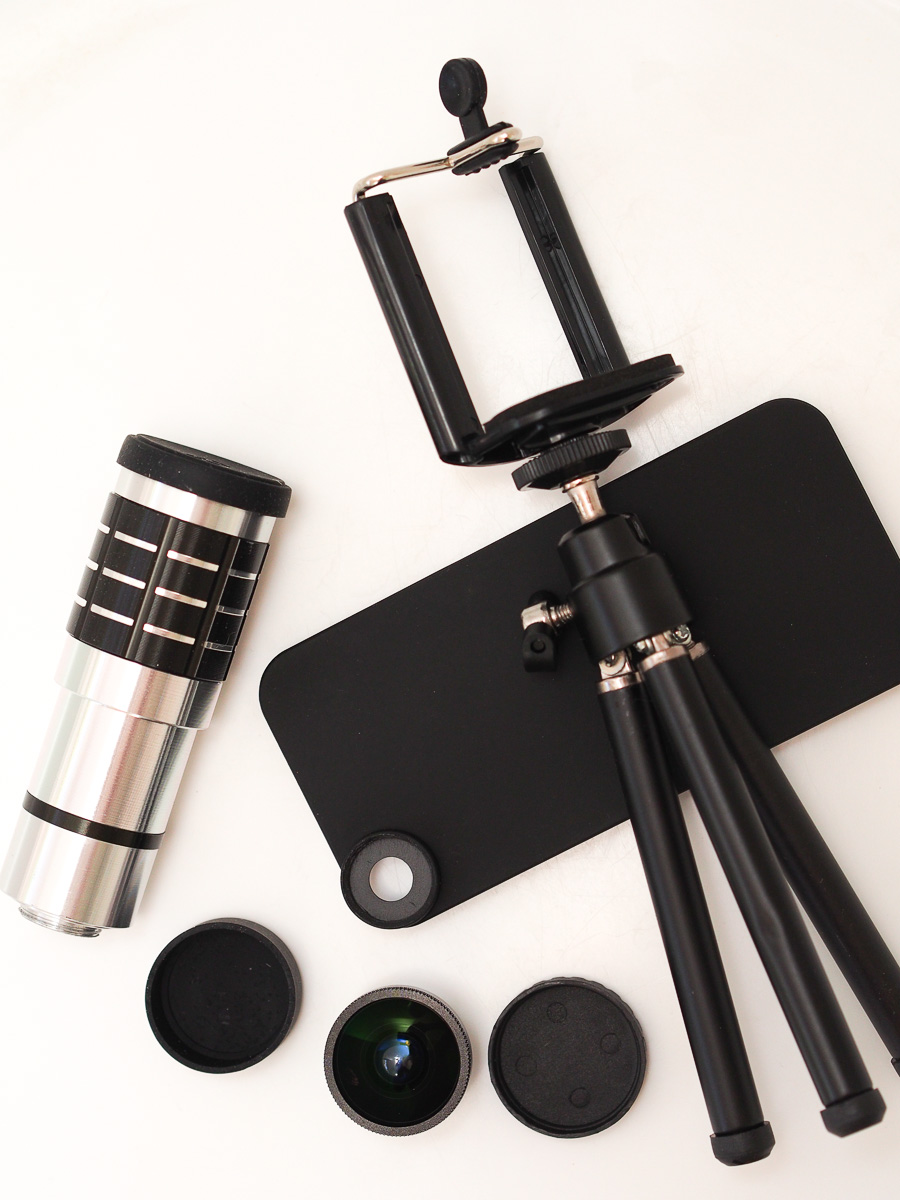 Assembling it is very straight forward, and this is how the telephoto lens looks with iPhone mounted on the tripod: 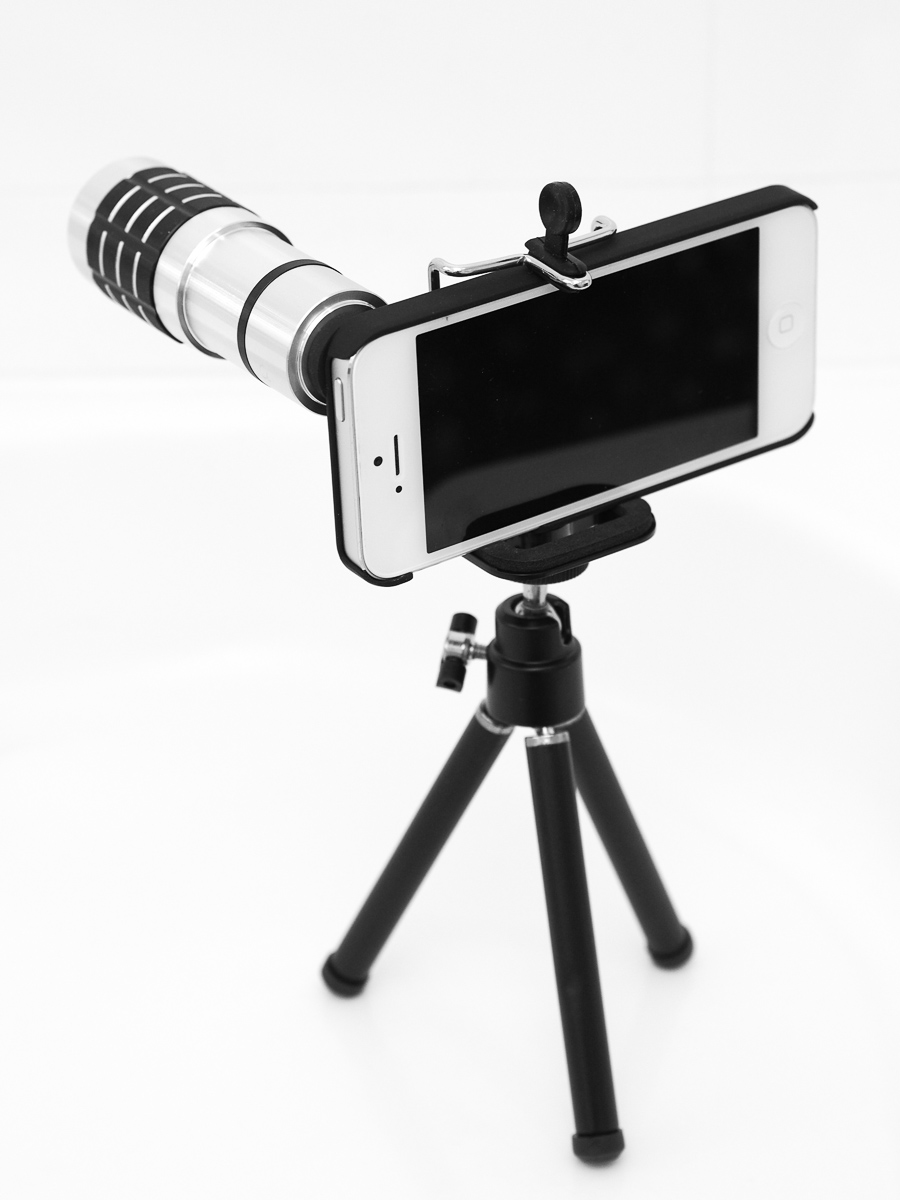 and the tiny little fisheye lens: 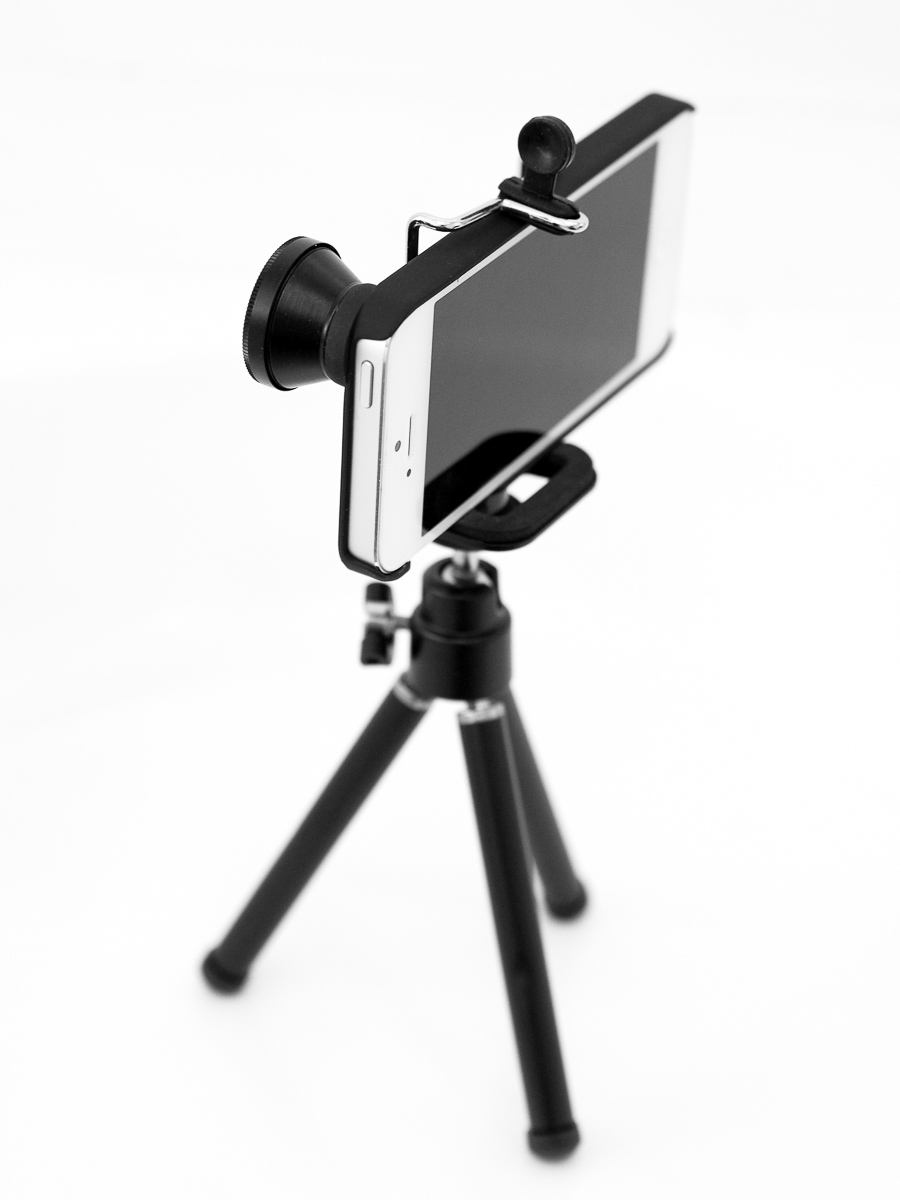 This seems to be a well built lens made of metal, comes with lens caps but no lens hood.
The field of view provided is approximately the same as a 300mm lens of a 35mm full frame camera or a 150mm lens on a Micro Four Thirds camera.
The lens can be rapidly attached or unattached to the iPhone, and when not in use, it is small enough for your pocket.
There is no optical zoom built-in but it does have a manual focus ring which requires two hands to turn – one to hold the lens so it doesn’t unscrew from the iPhone and the other to gain approximate manual focus. Fortunately, the iPhone autofocus will attempt to gain exact focus as long as you have manually focussed to within the capability of the AF range.
Unlike an Olympus Micro Four Thirds camera, there is no built-in image stabilisation so to get reasonable results, particularly in lower light conditions, you really need to shoot with it on a tripod. Nevertheless, with bit of practice on a sunny day you can get reasonable hand held shots.

Now the all important question – what is the image quality like?

In short, you need to regard this as a lomography lens – it is inexpensive, and used on a tiny iPhone sensor without image stabilisation and it is full of every optical defect you can think of.
It is reasonably sharp in the centre (although no where near as sharp as a kit lens on a Micro Four Thirds camera) but the plane of focus appears to be very curved so areas away from the sharpest focus will rapidly become blurred.
Furthermore, there is a LOT of chromatic aberration resulting in lateral color fringing, and a LOT of lens flare although the latter can be improved by creating a lens hood for it to shield the front element from incidental light.

The following shots are essentially straight from iPhone just resized in Lightroom for the web:

Handheld shot of a street busker in the shade – not super sharp but passable : 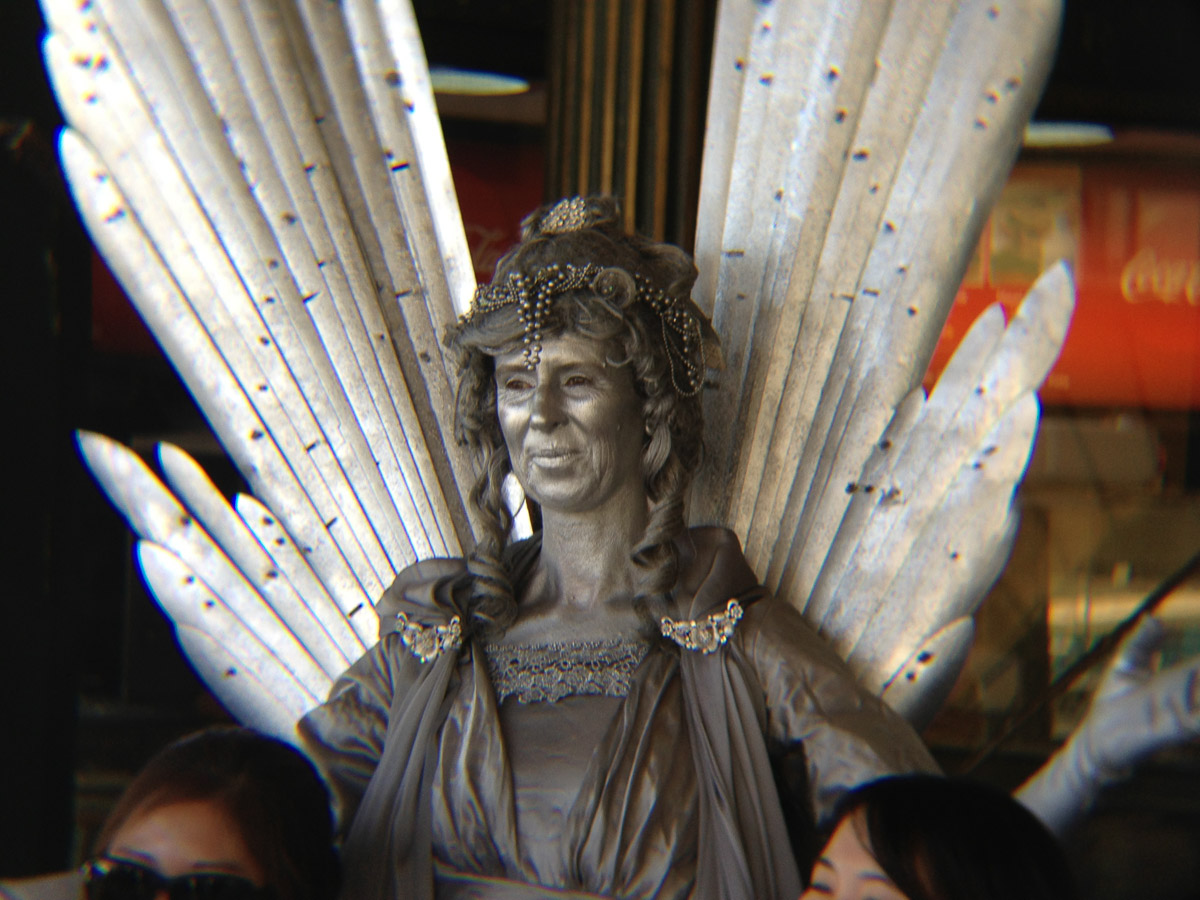 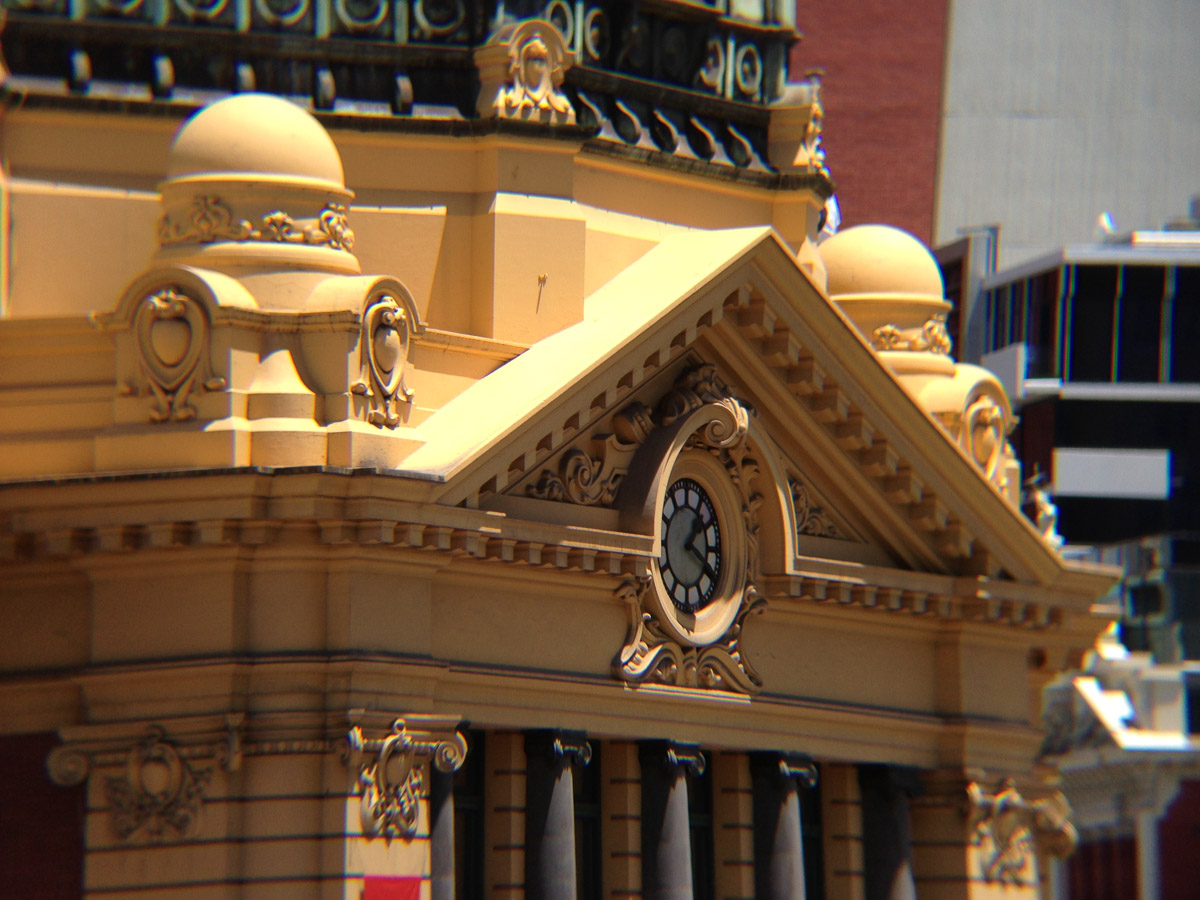 Nevertheless, for many this will be a fun lens and you may be able to gain some nice creative imagery.

This is a tiny metal lens which appears to be very well built and easily fits in a coin pocket of your trousers.

It has a convex front glass element which will need protection with the supplied lens cap when not in use.

As with the telephoto lens, this fisheye should be regarded as a creative lomography lens but you don’t need the tripod, so that makes it a fun lens to use.

There is no optical zoom and no manual focus – the iPhone’s AF should be able to address your focus needs although this can be tricky given the severe curvature of the plane of focus – you do need to ensure the iPhone AF on the part of the image you want in focus.

The field of view is said to be 160deg and it certainly appears to be around that level of ultra-wide angle fisheye.

Optically, it is no where near as sharp across the frame as a $200 or so Samyang fisheye for Micro Four Thirds, and it has a lot more chromatic aberrations but then it is a lot less expensive and much smaller.

By default, the image is that of a traditional circular fisheye lens as shown: 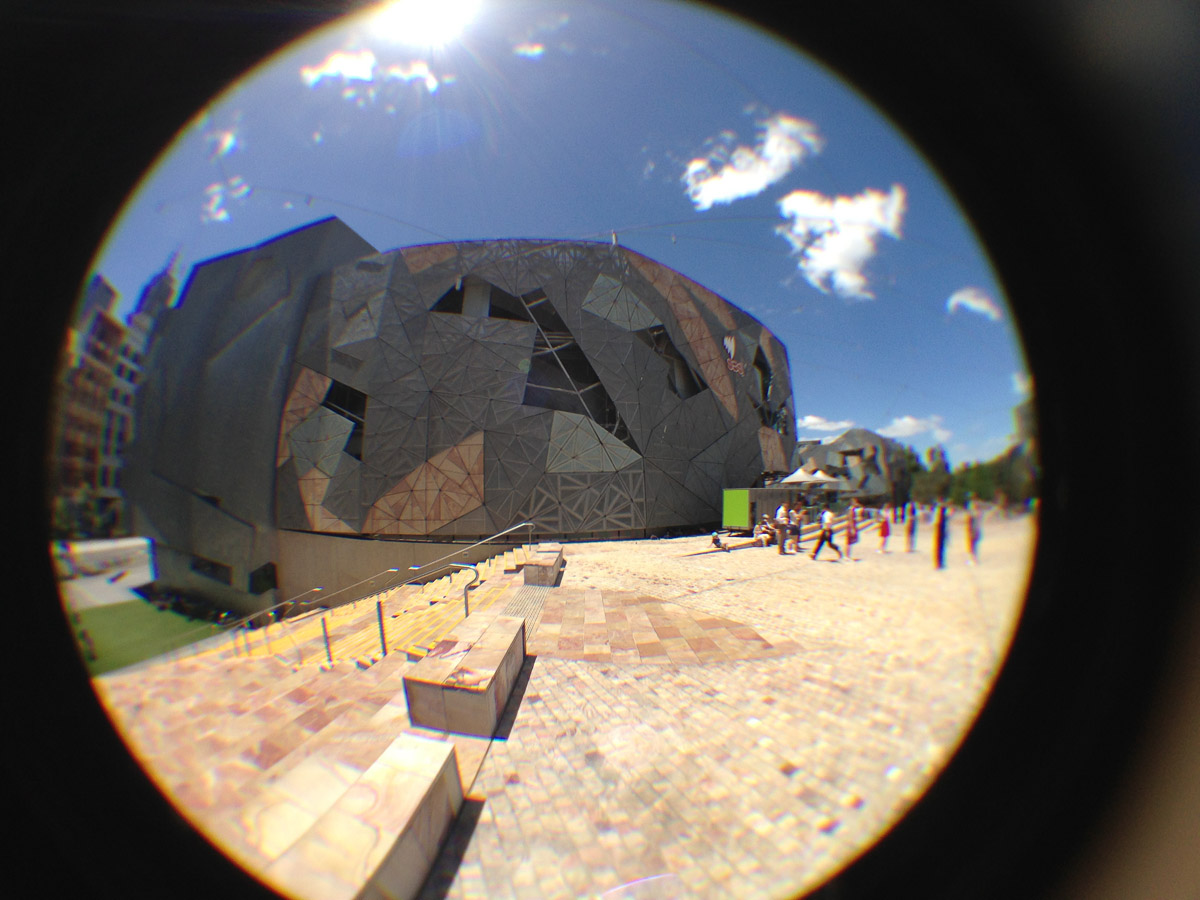 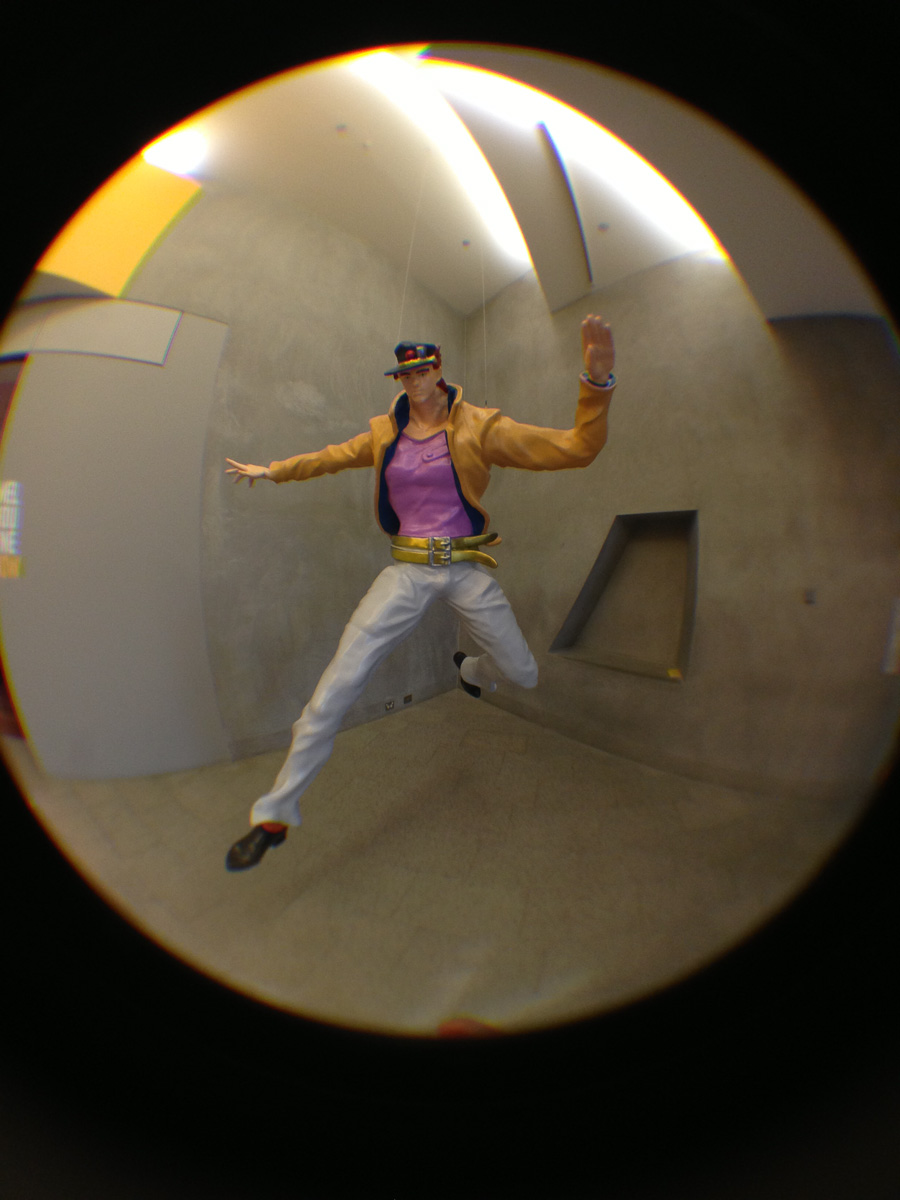 But you can zoom in on the iPhone to give a more rectangular image although the lens did not appear centred so the circle is a little more to the left in the frame. 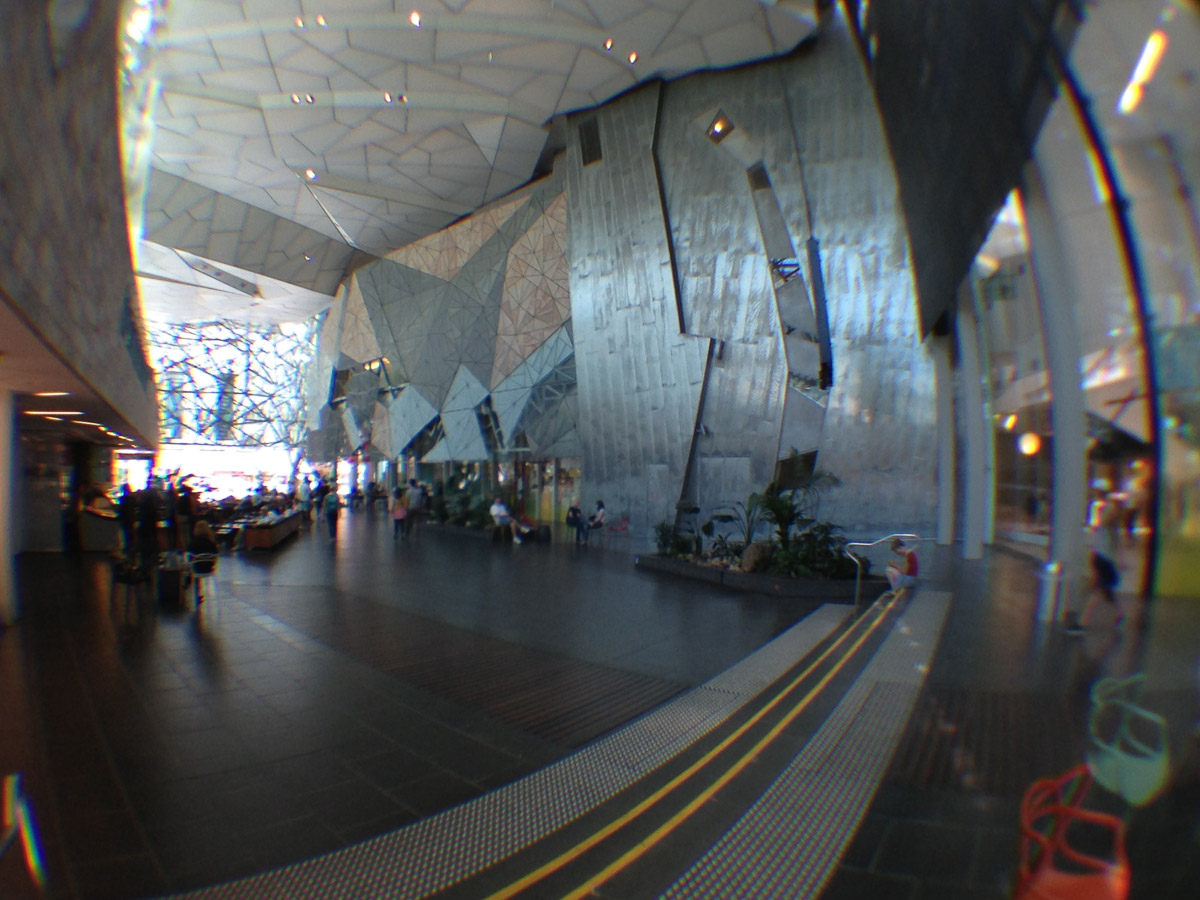 Now if you look at the above image you will notice weird blurring occurring near the edges, so I thought I would have a look and see if it was just poor sharpness or out of focus issues.

Here is an art installation on a FLAT wall: 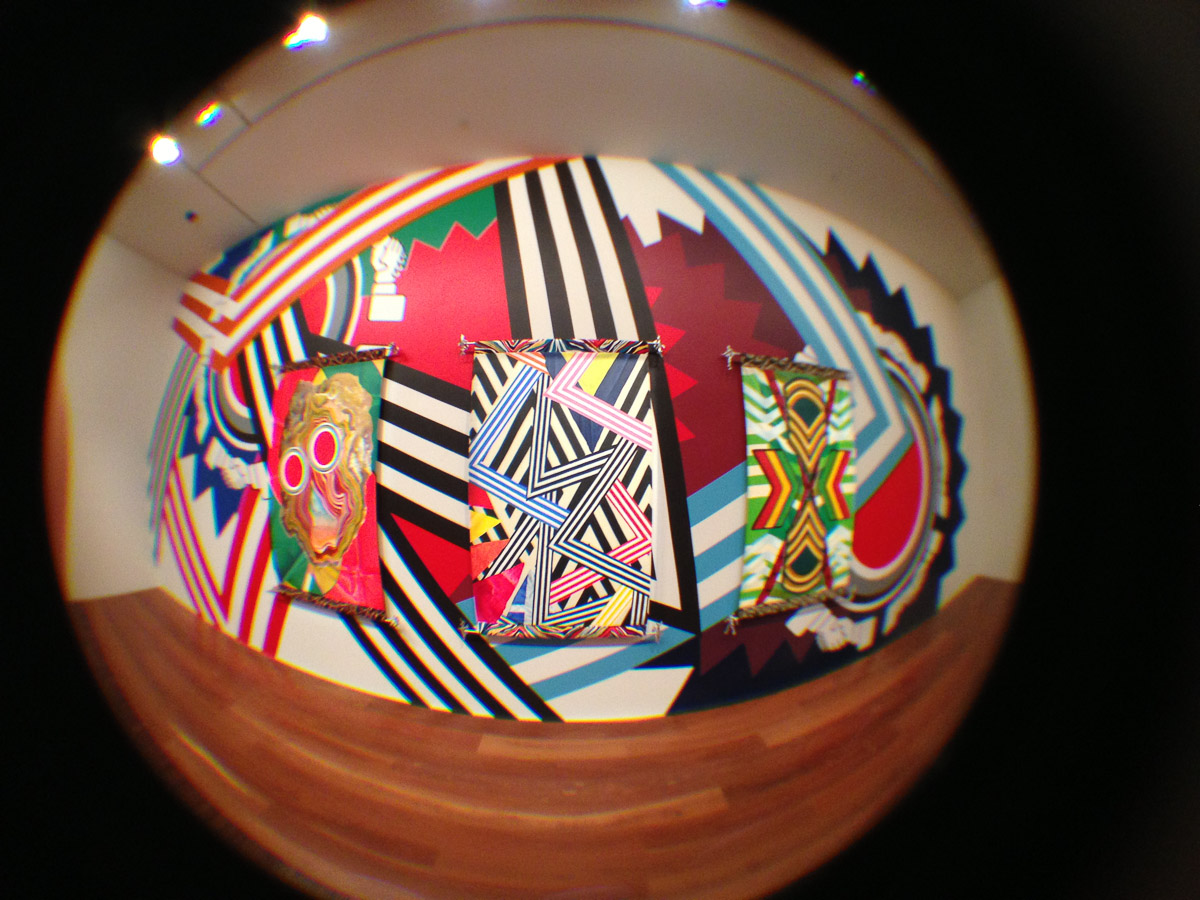 and using the iPhone to zoom in, you can see only the centre is sharp and this is due to severe curvature of the plane of focus: 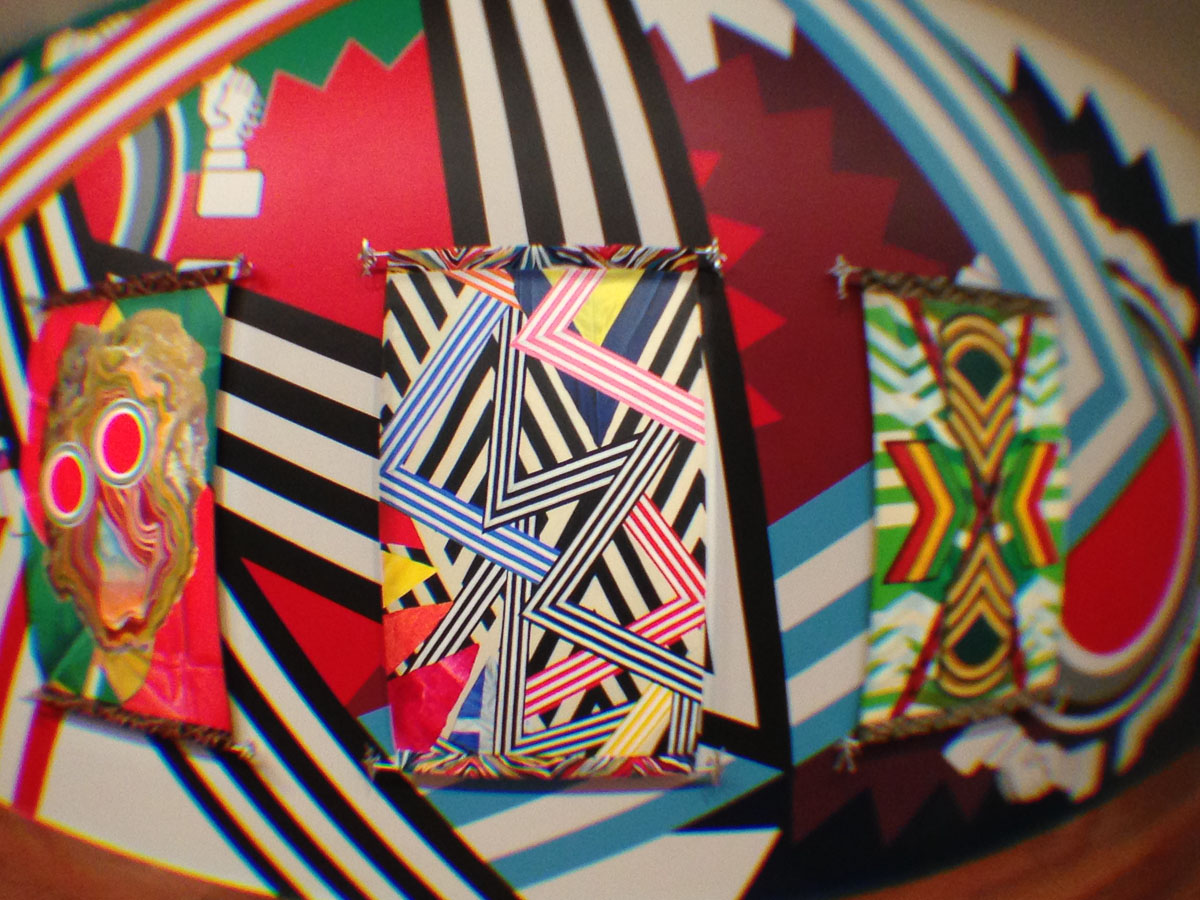 Here is another example to prove this, another art installation on a flat wall taken from only 2-3m away: 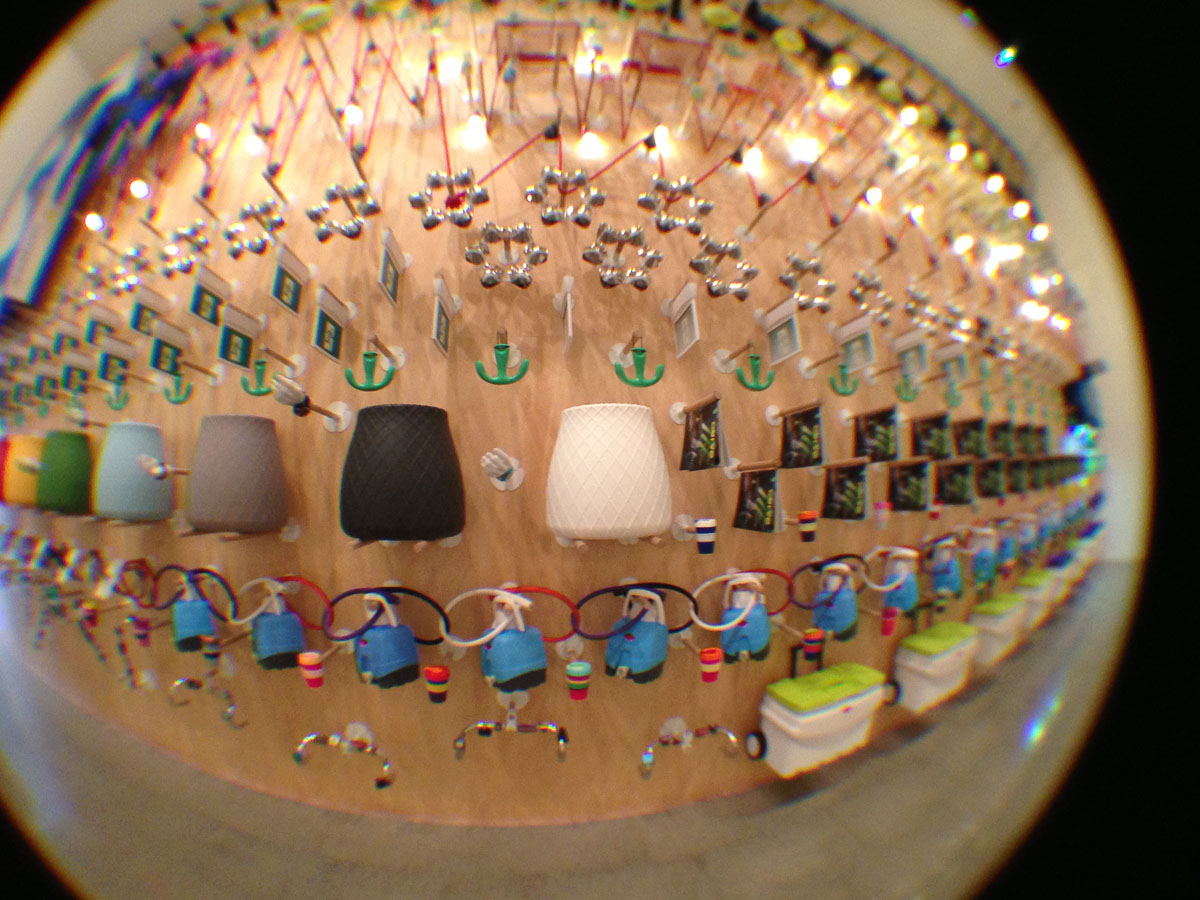 and using the iPhone to AF on a different part of the installation to the right of centre, you see the centre is now blurred while the area of AF is kind of sharp: 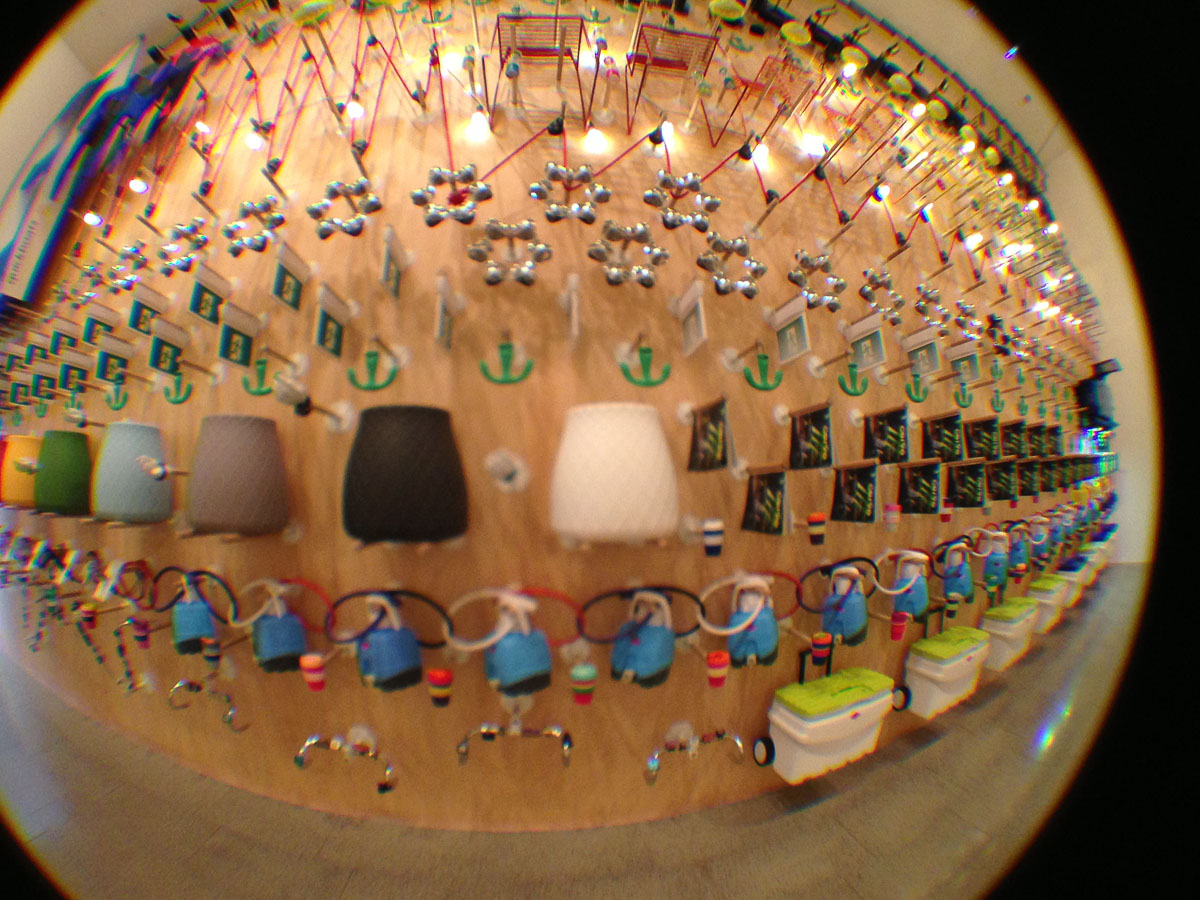 And here are a couple more art works to show what this lens can do: 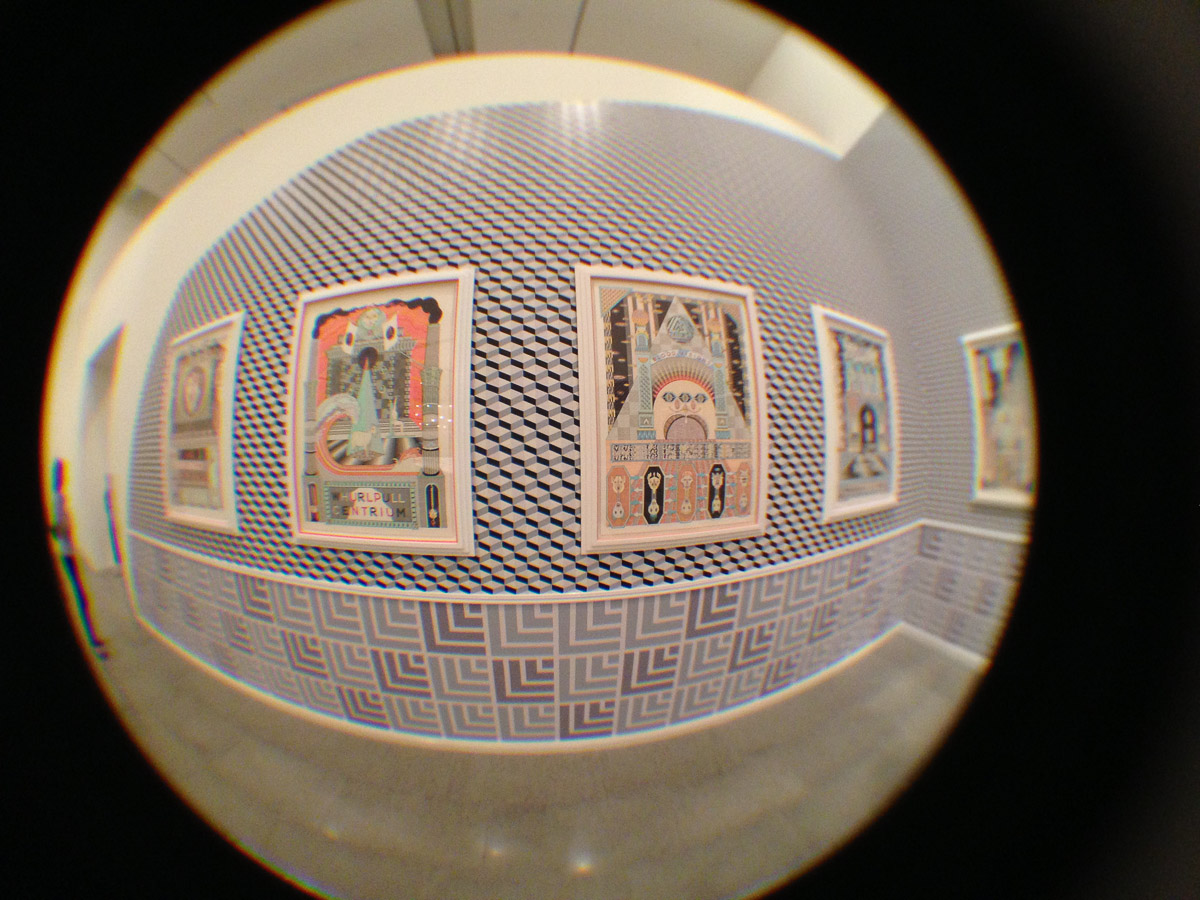 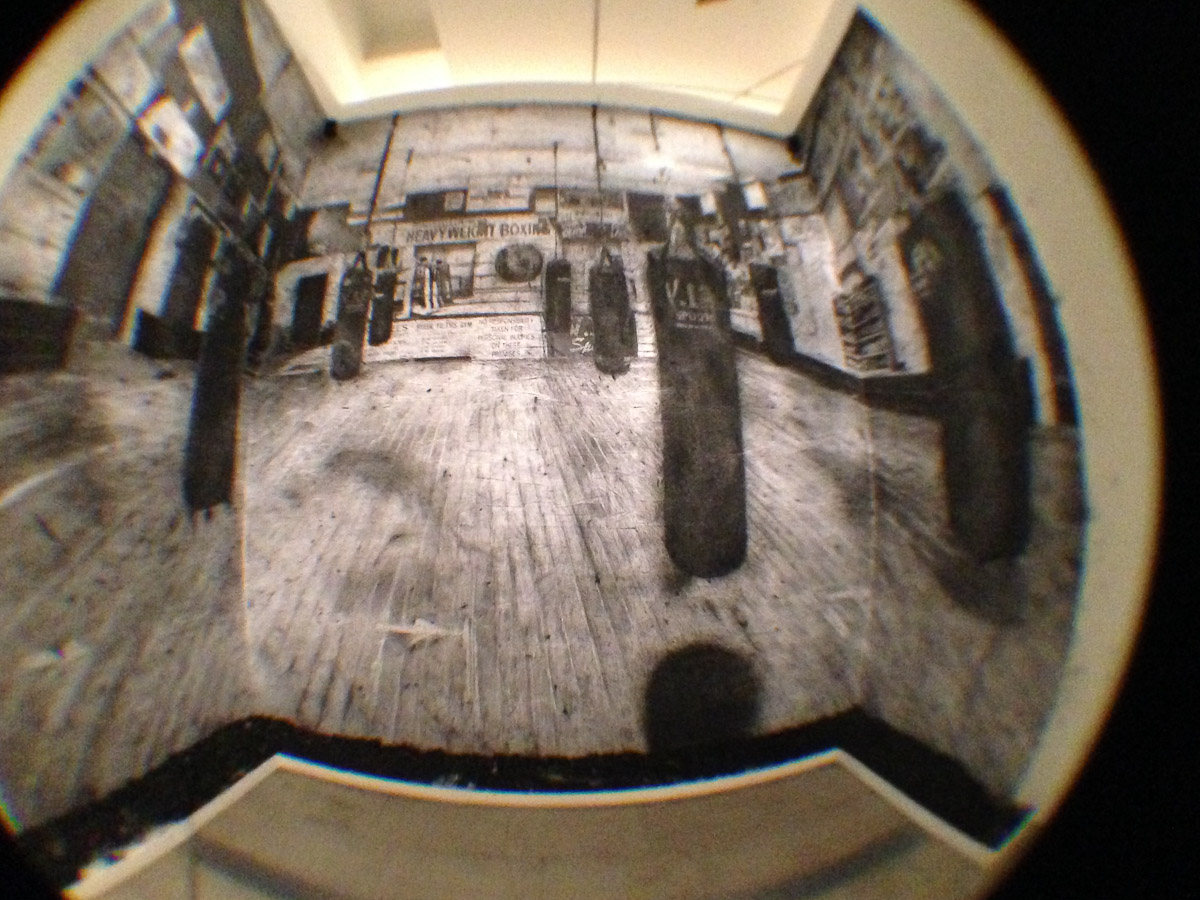 All in all, I really enjoyed using the fisheye – if the blurred lomography edges appeals then you may well find it a useful addition to your iPhone gear.

The lens kit appears to be good value, particularly for those who can’t afford a Micro Four Thirds camera, or who want something even smaller to take with them.