Following on from my introduction to the Red Centre which covered why go, getting there, accommodation and car hire issues, and my post on Alice Springs, the indigenous peoples, road trauma and climbing Mt Gillen, it is now turn to highlight the quick tourist’s view of the West Macdonnell Ranges or Tjoritja (I did not get time to see the East Macdonnell Ranges on this trip … maybe another time).

You can explore these ranges by hiring a car (preferably a 4WD to better negotiate a few kilometres of gravel roads to some of the gorges), or you can go via a tour bus.

An excellent option which I took was to stay overnight at the Glen Helen Resort which is at almost the far west end of the ranges some 132km from Alice Springs on bitumen road, or, if you have a caravan or tent then overnight at one of the gorges is usually possible.

Many of these gorges have permanent waterholes but they are very cold, so swimming would be more a summer pursuit!

For the adventurous, the Larapinta Trail is a world-renown bush walk trail covering some 223km of one way walk in 14 day trip sections of very exposed walks – mostly along the ridges of the ranges.

The history of this mountain range is fascinating:

850-800 million years ago, most of the southern half of the Northern Territory  was inundated by a shallow sea resulting in quartz-rich deposits and these formed the now red “Heavitree quartzite rock” layer which is so evident in the cliffs today.

800-760 million years ago, the sea became shallower still, forming tidal lagoons which deposited lime-rich mud which hardened to form greyish dolomite, a type of limestone rich in magnesium. Silt was also deposited and this became siltstone. This layer is called the Bitter Springs Formation, and occurred at a time when stromatolites (blue-green algae) dominated the life forms on earth. Stromatolites were the main life form on earth for 2000 million years, and being the 1st photosynthetic bacteria, eventually oxygenated the atmosphere and the seas (the Great Oxygenation Event which started some 2400 mya) which allowed current life forms to evolve and also oxidised the minerals in the seas such as iron resulting in massive deposits of red sandstone high in iron oxide such as in the Pilbara – see my post on Broome.

760-620 million years ago, the build up of oxygen and falling methane and carbon dioxide levels resulted in a reverse greenhouse effect, and earth became a giant snowball covered in ice. Global volcanic activity reversed this process, thawing the world and the melting glaciers from two ice ages (750mya and 625mya), deposited eroded materials to form new rocks, pebbles and boulders, these formed the Areyonga Formation and then the Pioneer Sandstone layer. As an aside, around 630mya, the thawing set the stage for a new evolution of life forms – the Ediacaran fauna (named after the Ediacara Hills of nearby South Australia).

620-600 million years ago, the sea returned but was deeper, resulting in fine grained sediments which formed the Pertatataka Formation consisting of red-brown flaky shales. This was the age of jellyfish.

The combined thickness of the above layers amounted to ~ 2 kilometres.

Between 340 million and 310 million years ago, massive earth movements pushed up these layers of quartzite and the many other sedimentary layers on top of this (from top-down: Juile formation, Pertatataka formation, Pioneer sandstone, Areyonga formation, Bitter Springs formation)  to form a mountain chain 10,000m high – the ancestral ranges were as high as today’s Himalayas!

Indeed, a feature of the region are the many vertically oriented layers of red quartzite rock running parallel with the main road and somewhat resembling a natural form of the Great Wall of China.

Each of the above layers are evident on the ground surface as you drive back from the Ellery Creek Big Hole – at the waterhole, the cliffs are the quartzite layer, and then as you drive back to Namatjira Drive, the northern border is the Pertatataka Formation – so you sequentially drive across 250 million years of geologic history in those few kilometres.

The red quartzite cliffs at Ormiston Gorge actually consists of 2 layers of quartzite with the top layer having been pushed over the bottom layer from a distance of some 2 kilometres!

The first two sites are quite close to Alice Springs and could be skipped and done another day if staying in Alice – Simpson’s Gap (can even ride a bike here) and Standley Chasm.

This is a favourite location for the locals to escape the summer heat as it is said to always have a lovely breeze through the gap – certainly on a cool winter’s morning, there was a substantial chill factor here warranting use of gloves and a spare camera battery!

Here is a shot of the lovely river red gums on the creek bed. The only one of the sights on this trip which is on private land and requires an entry fee – best seen at midday when the sun lights up the chasm, and it has a nice cafe and souvenir shop.

The walk to the chasm is very pleasant and quite different from the other gorge walks as you follow a narrow rocky creek up a gorge. 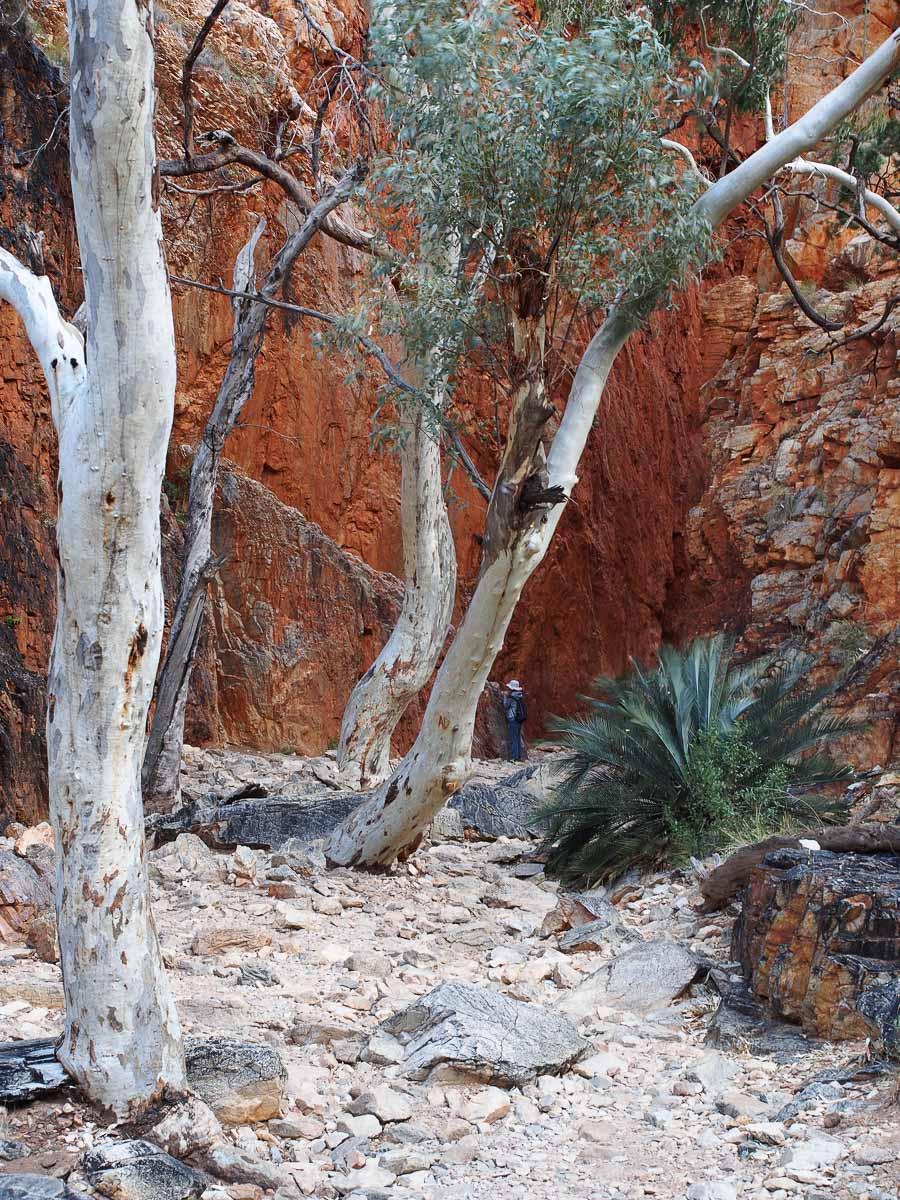 We were there too early in the day and thus the gorge itself was fully in shade but there was a lovely orange glow on the cliffs behind the gorge. 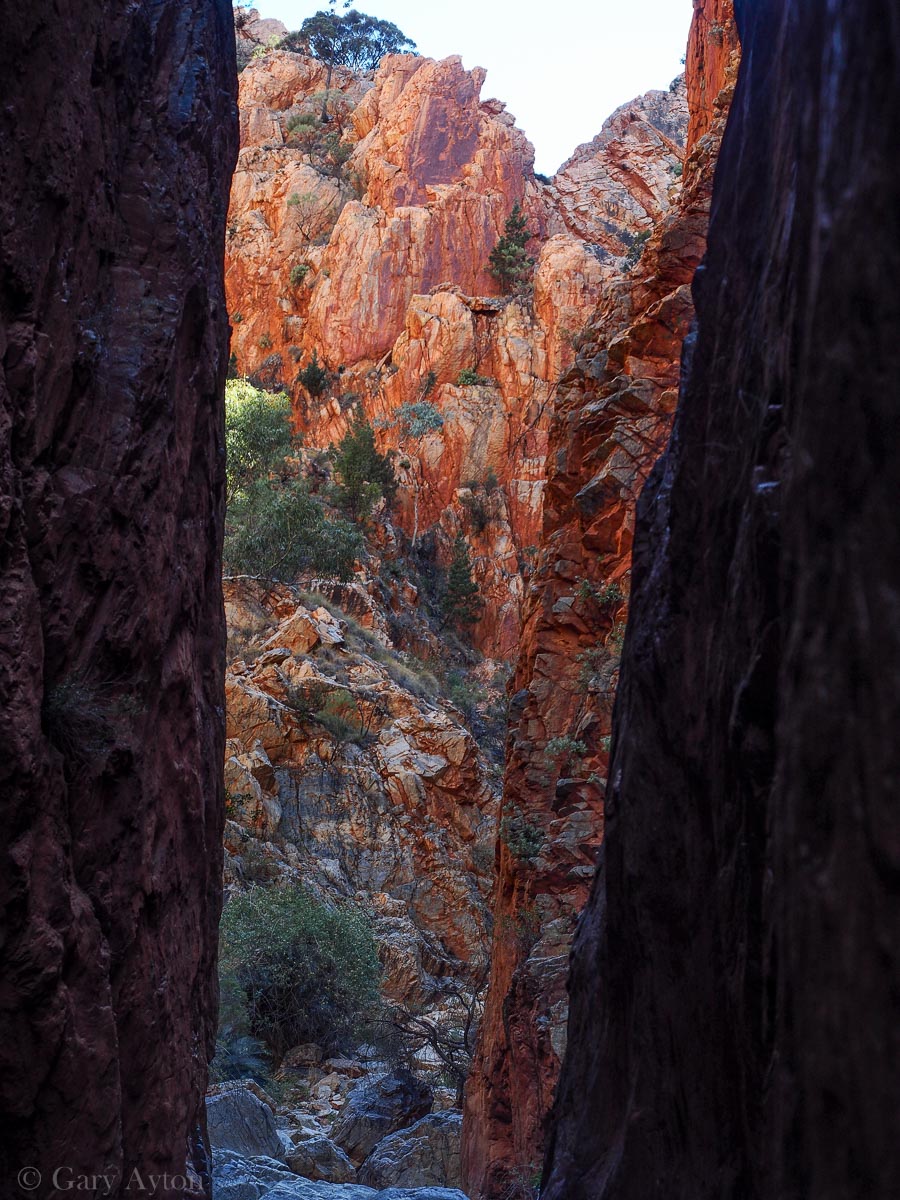 Vertical quartzite layers and other types of rock on the walking path to the chasm: 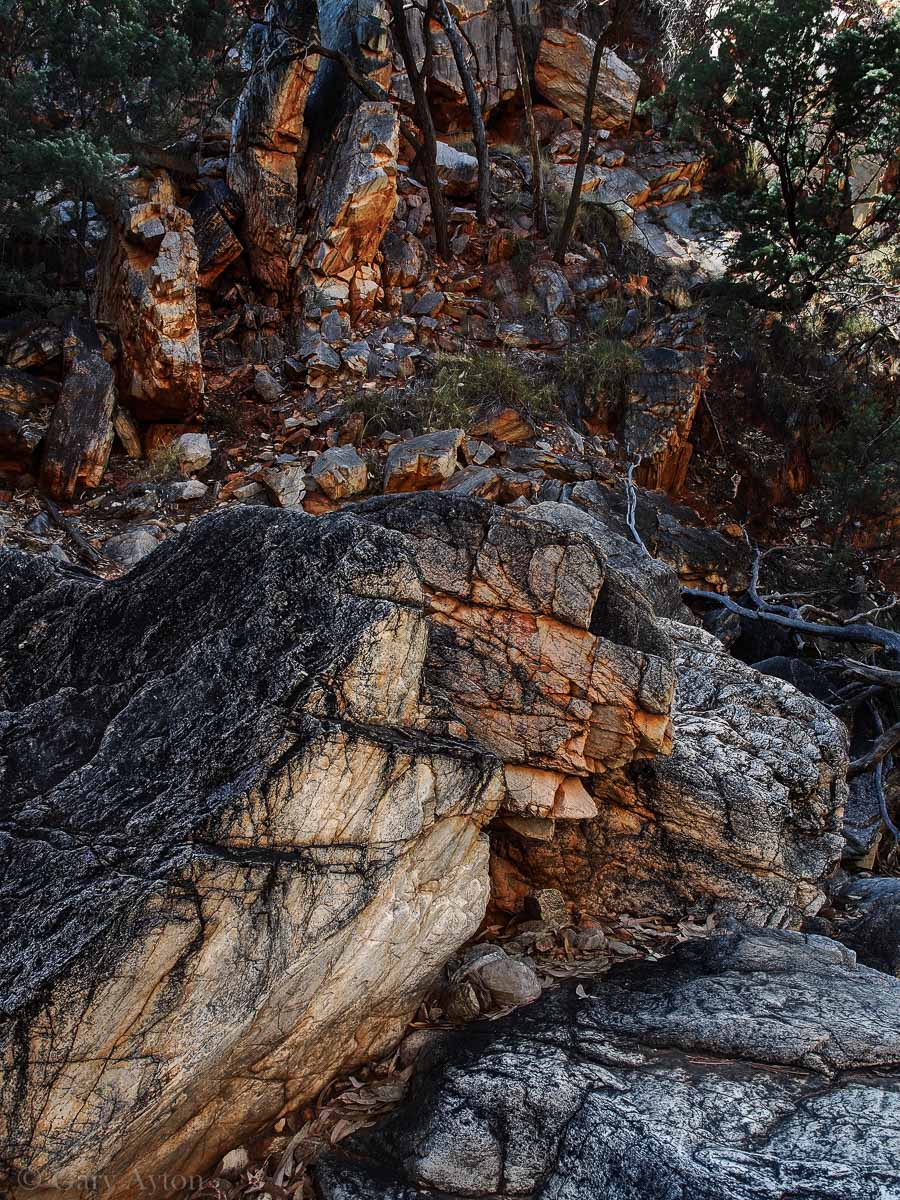 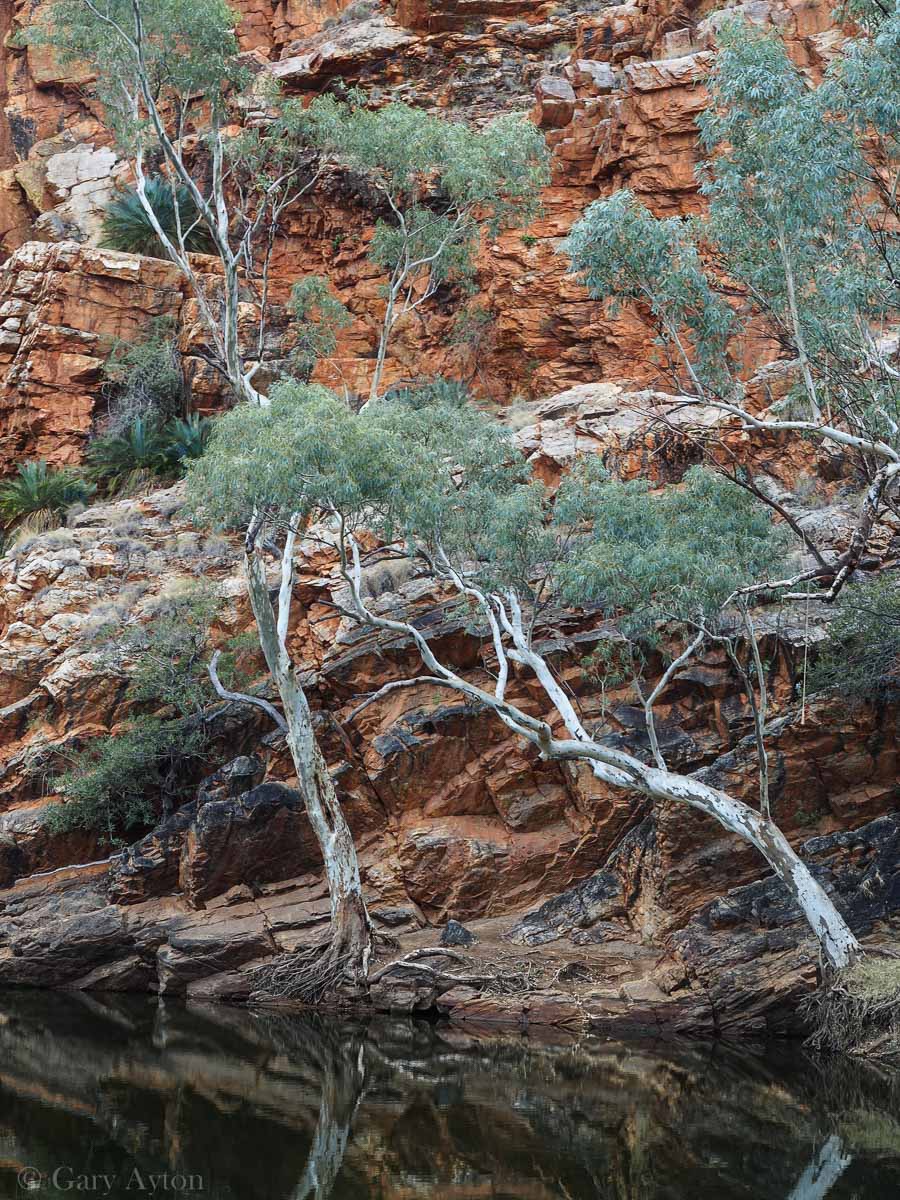 If you are short on time, you could skip this one and do Ormiston Gorge instead, but it is a nice little walk to a small waterhole with beautiful ghost gums at the base of a narrow gorge: 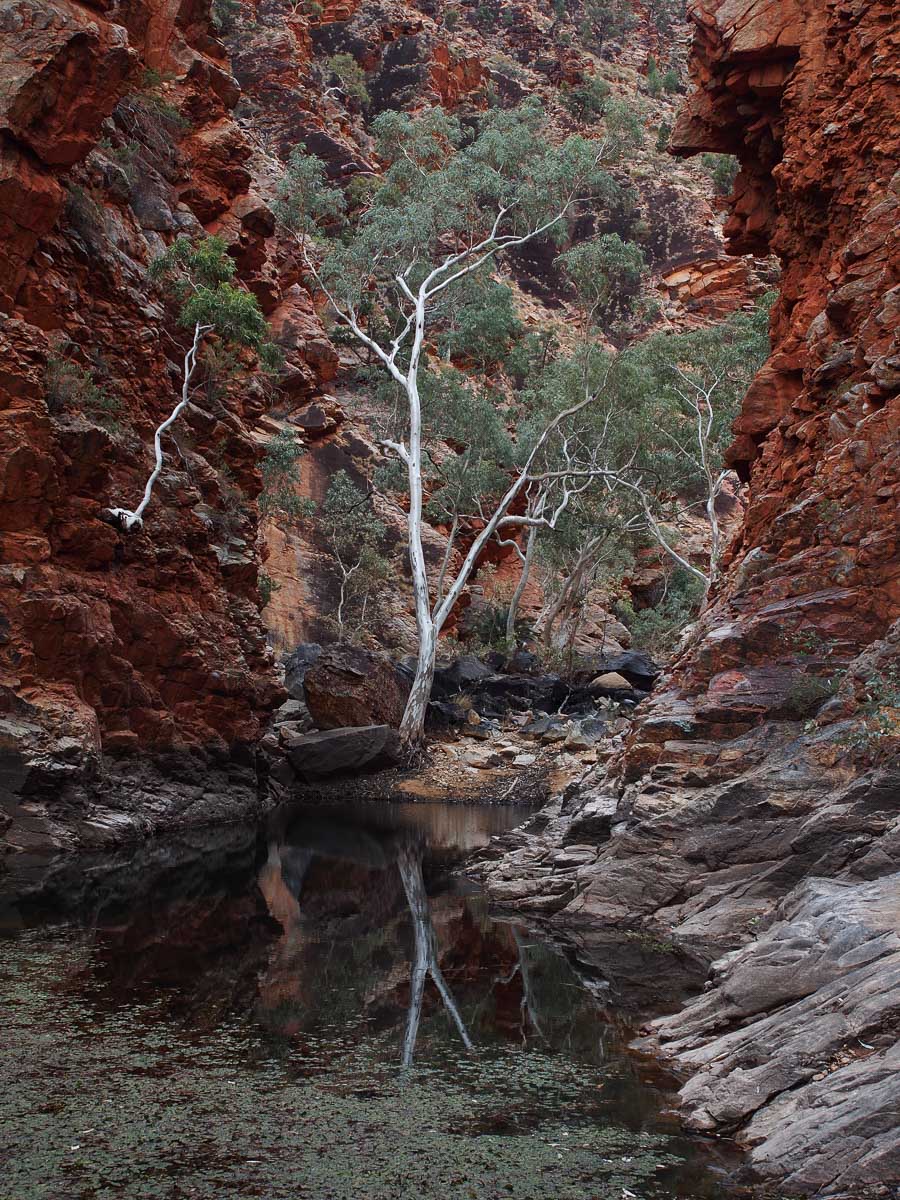 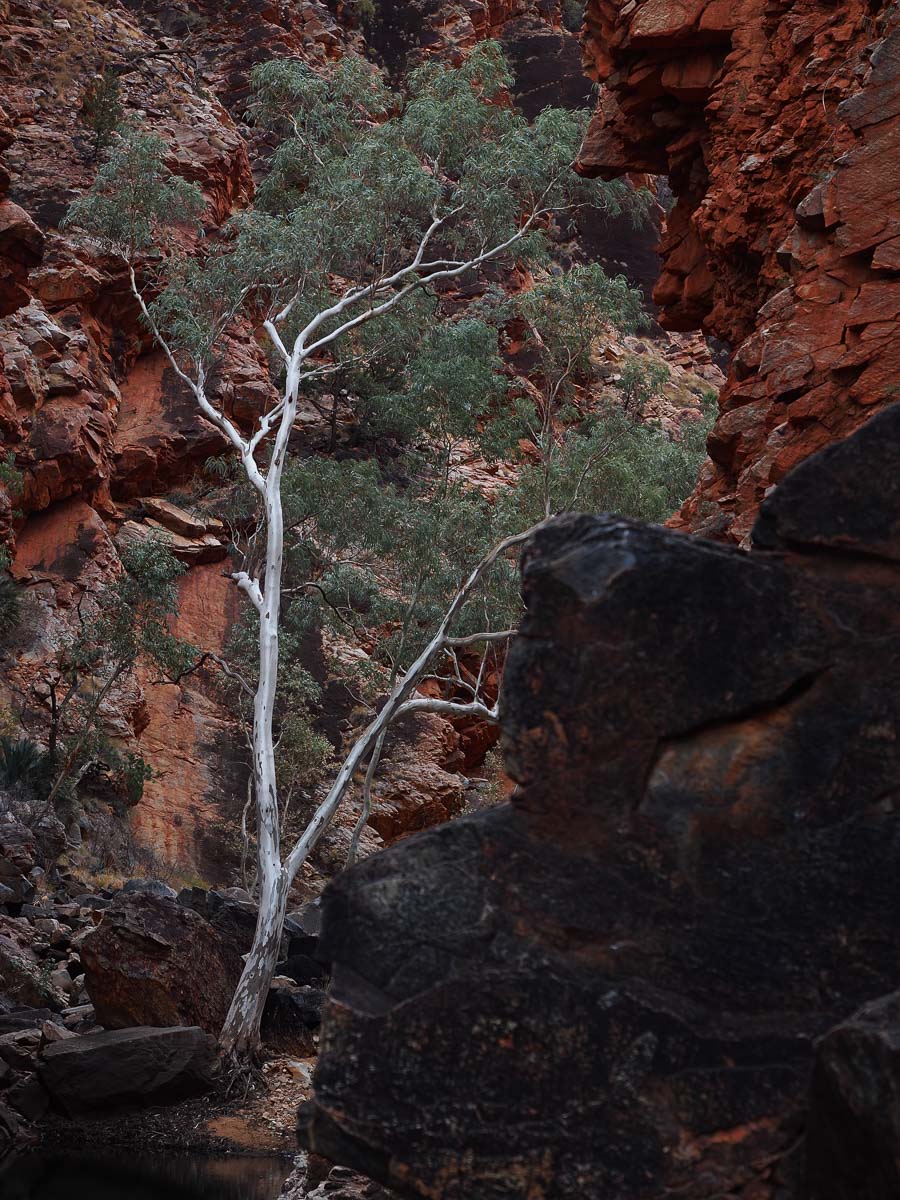 This is the jewel in the crown of the West Macdonnell ranges for me.

There is the longer Pound Walk loop which takes “3-4hrs”, but we did not have time for this one on this trip. There is also a 1-2 day return walk to Bowman’s Gap along the river bed.

Make sure you do the full Ghost Gum circuit which will take 1.5-3 hours depending on how many photos you take – the walk does go up about 70-100m but there are good paths and steps. It takes you to a beautiful ghost gum on the top of a cliff where there is a lookout down to the river bed below and across the awesome red gorge cliffs: View from the lookout: One then descends down into the gorge where there are a myriad of photographic opportunities of rock forms, red cliffs with spindly little white ghost gums clinging to them: 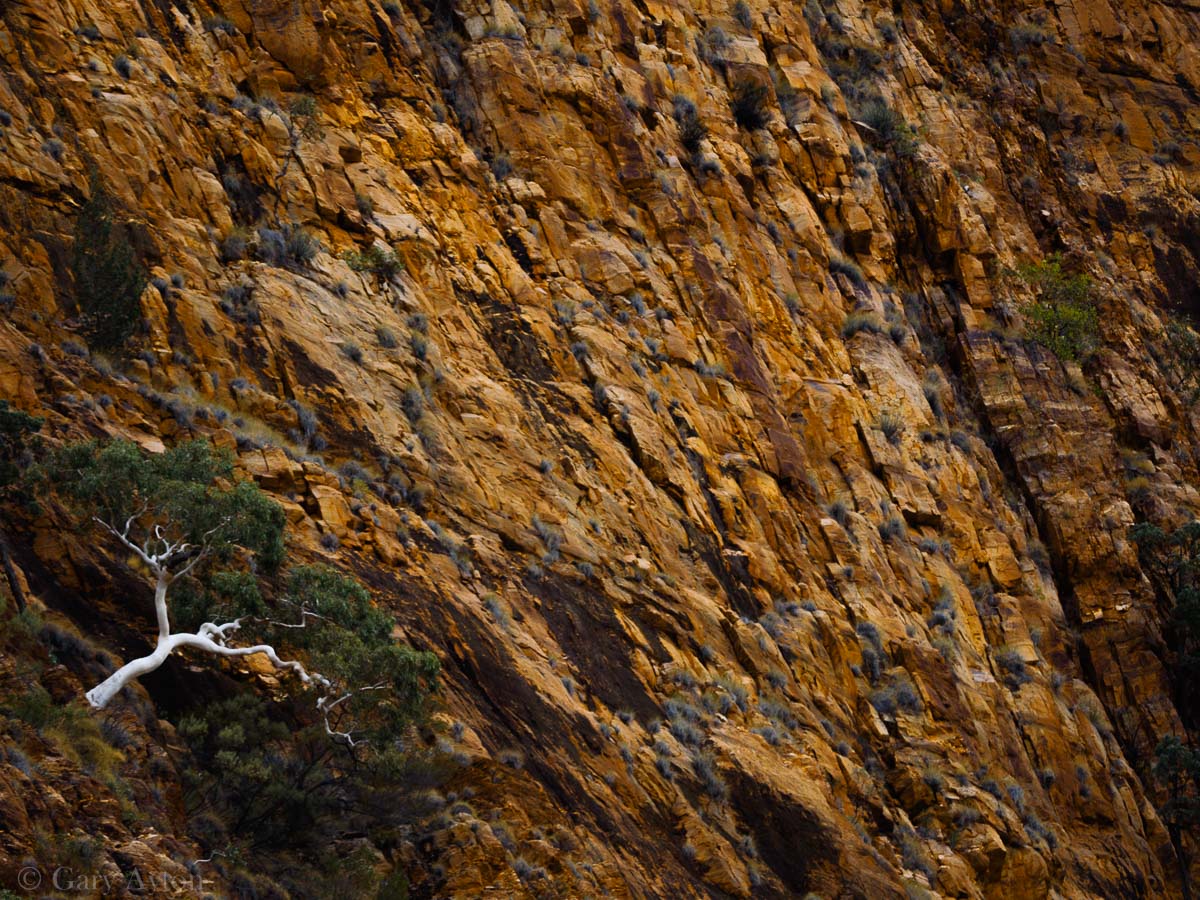 Once on the riverbed, walking is more a task of clambering over the thousands of boulders as you make your way back to the sandy river bed: On return, there is a lovely large waterhole at the base of the red cliffs with a few water birds such as egrets and more lovely gum trees: 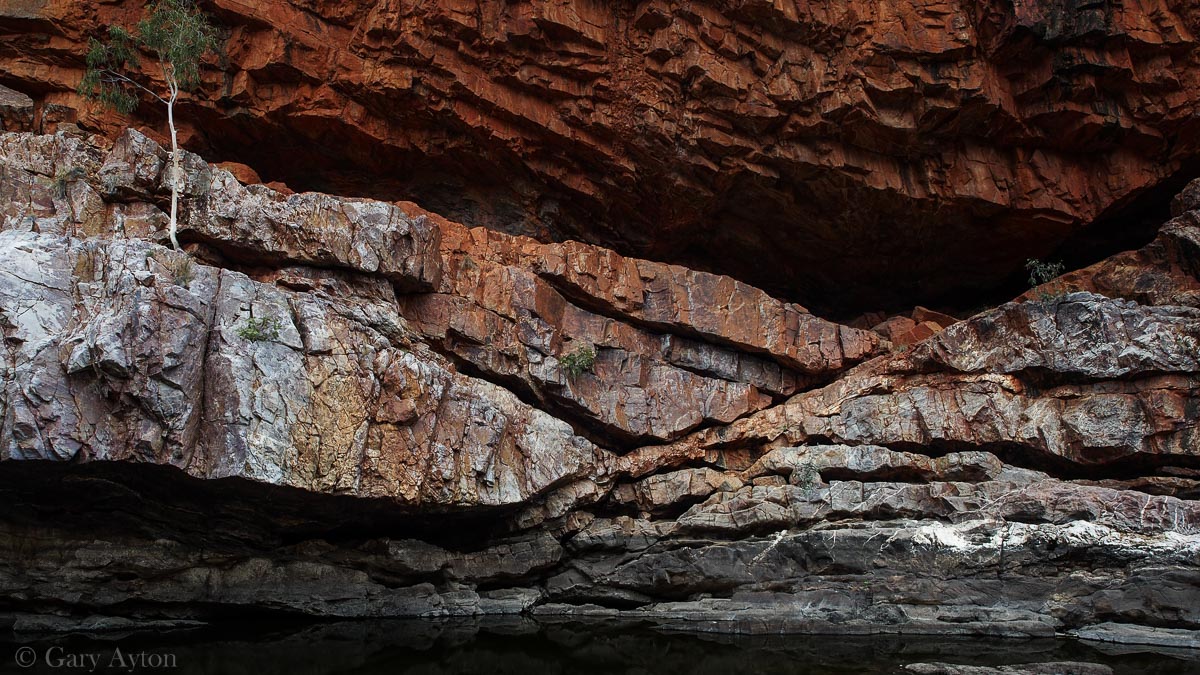 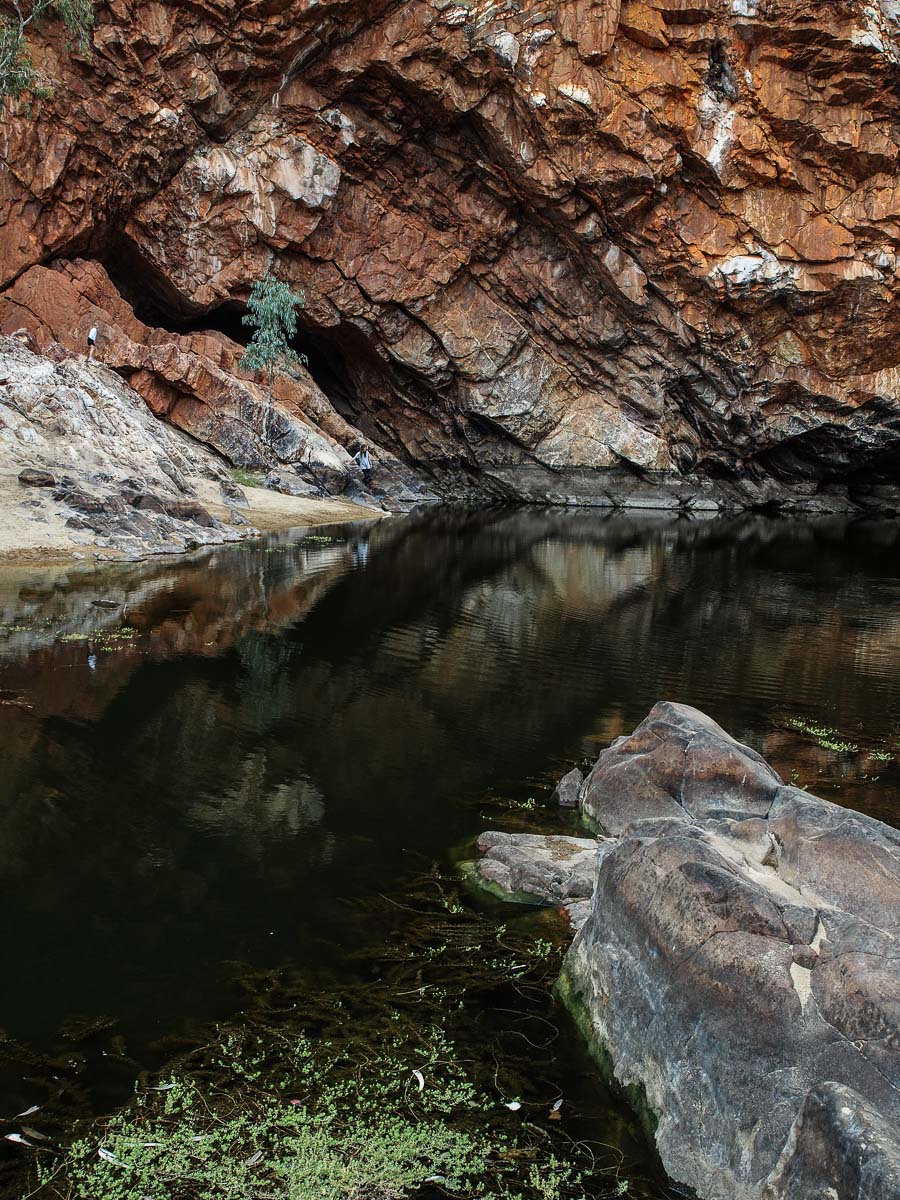 Finally, the path back to the car park and kiosk takes you past these two beautiful ghost gums: Glen Helen Resort is the only motel style accommodation within the ranges and it has a very nice restaurant with a great chef – but you will need to book in advance!

The rooms are modest with a double bed and bunk beds but are all that most would need for an overnight stay.

The Glen Helen Gorge itself, Finke River and waterhole are quite difficult to photograph well and you do need to have complimentary lighting such as a nice sunrise, although there are opportunities to photograph the bird life around the water hole.

This is the last gorge, but one that is well worth seeing. There is a nice walk along the dry river bed to a waterhole at the base of a very narrow and rocky gorge, and if you get the light right and your exposures, it can be magic.

First the walk takes you past some more lovely ghost gums: 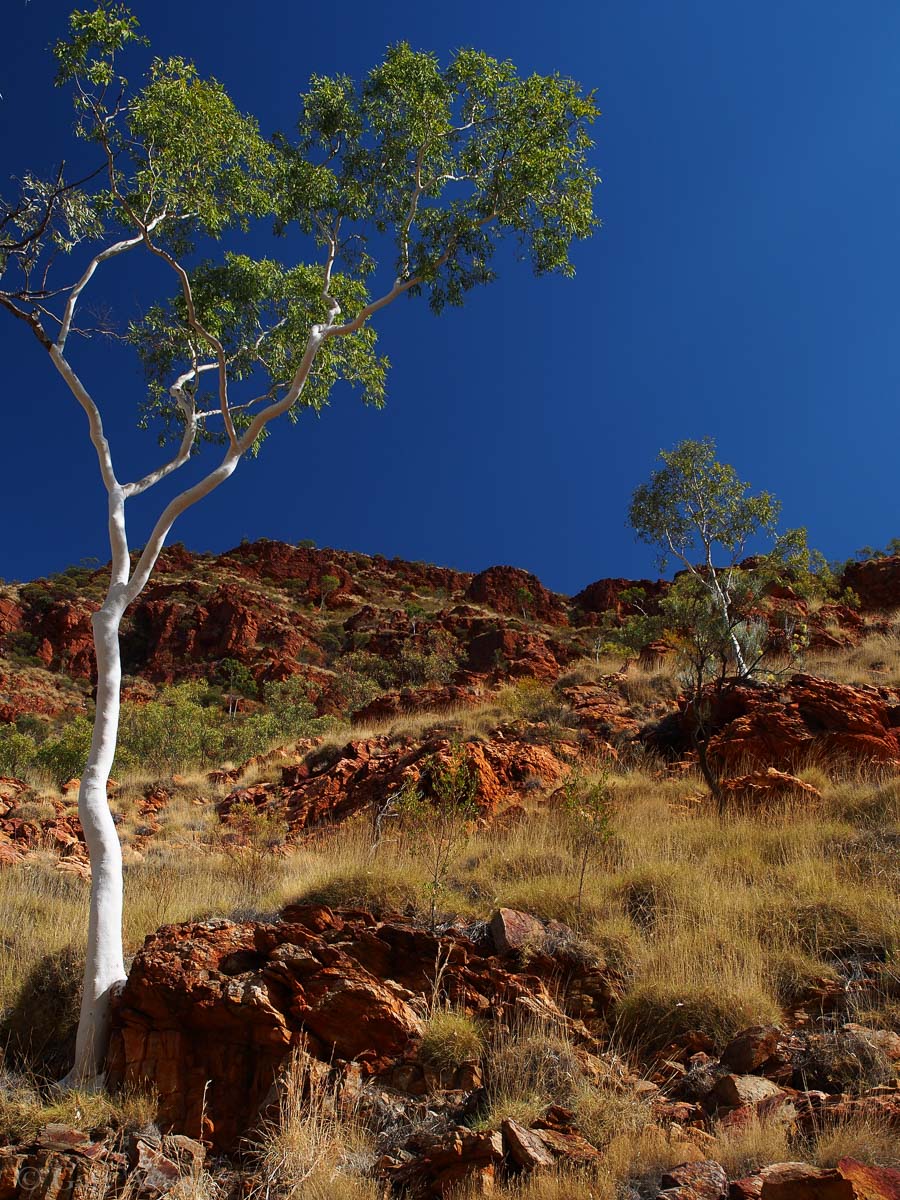 Then along the river bed with its many river red gums, and finally to the gorge and waterhole: One can continue on from Redbank and head towards the unsealed gravel Mereneenie Loop Road (some 48km on this rough road to Hermannsburg to complete a loop back to Alice, or one can continue another 150km or so to King’s Canyon), and in doing so, can stop at Tyler’s Pass Lookout to take in views of the massive meteor crate which is known as Gosse’s Bluff (one can drive into it but that is another unsealed road and needs extra time allowed for it).

Gosse’s Bluff or Tnorala, is an eroded meteor crater which impacted some 142 million years ago, very close to the Jurassic – Cretaceous boundary. Originally the rim was ~22km diameter but now has eroded to 5km diameter as a 180m high crater-like feature The junction with the Mereneenie Loop Road – The Red Centre Way in the middle of no where: 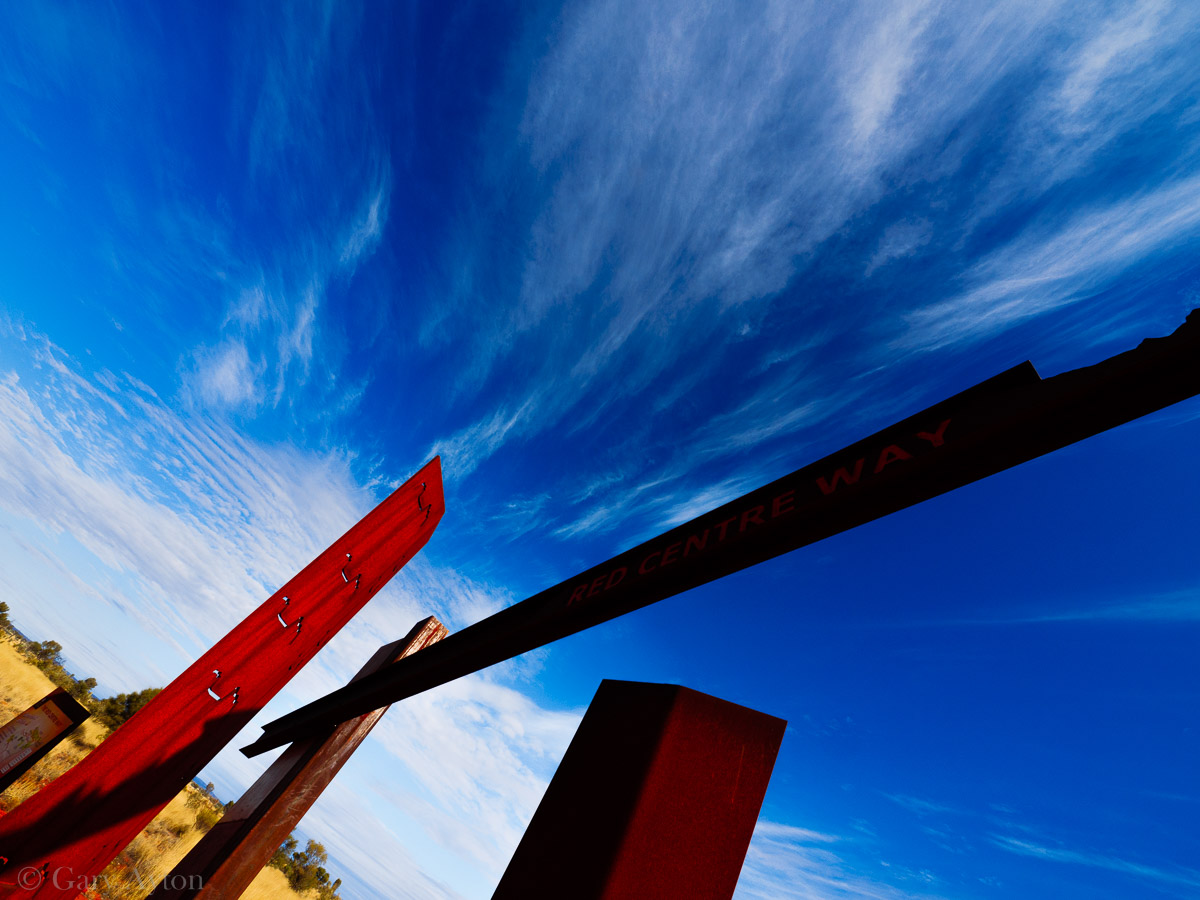 All images were shot using Micro Four Thirds cameras – the Olympus OM-D E-M5 and E-M1 combined with Olympus mZD 12-40mm f/2.8 lens and the Olympus ZD 50-200mm f/2.8-3.5 SWD lens with Vivid picture mode and polarising filter. The exceptions were the shots at Simpson’s Gap and Standley Chasm which were shot with the Olympus ZD 7-14mm f/4 lens.