Well, thought last week was bad enough when I wrote about our heat wave, but today beats everything for us Victorians.

Melbourne’s previous highest temperature of 45.6degC on the Black Friday Bushfires in 1939 has easily been passed with temperatures in the mid-46deg in the city while only 50km away temperatures have hit an unbelievable 47.9deg C at Avalon airport, all this and winds up to 90kph.

Here is the snapshot of peak temperatures and conditions (click on image for a larger view): 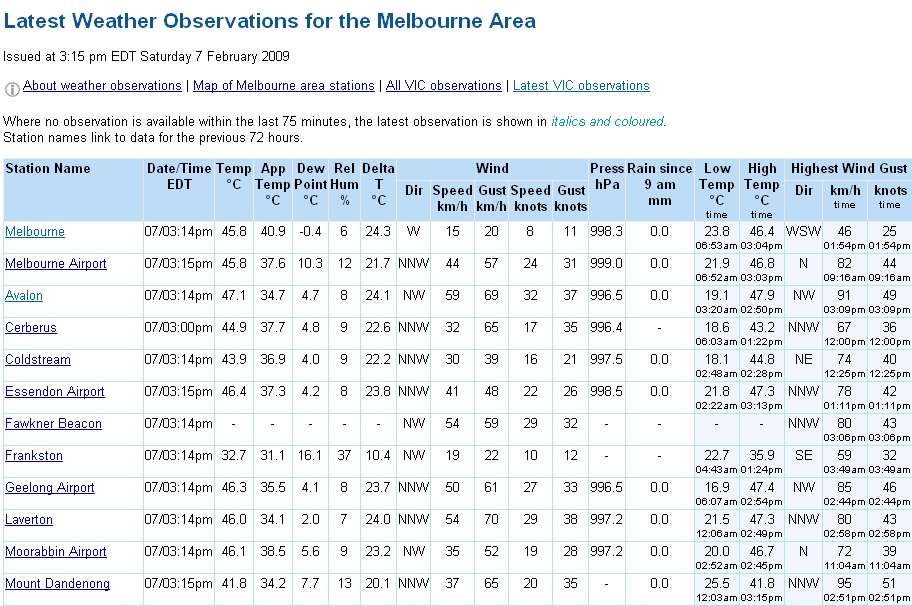 Spare a thought for those trapped in the bushfires and the fire fighters trying to protect them in this hellish heat.

ABC Online report Sunday morning at least 25 dead and expected to find more than 40 dead while townships including Kinglake and Marysville have largely been destroyed with residents trapped for 4-5 hours in the region at the height of the blaze. Elsewhere, 50 homes burnt near Bendigo and 30 near Kilmore and Wandong where the CFA hold serious concerns. Although there were 400 fires across Victoria Saturday, by Sunday morning there were still 36 fires out of control, a dozen of these were major.

ABC Online report Sunday afternoon and the toll rises, at least 700 homes and 66 lives lost with more expected to be found while fires still rage out of control making it perhaps the most tragic bushfire episode in Victoria’s recorded history, eclipsing Ash Wednesday in 1983 when 76 died and Black Friday in 1939 when 71 died.

The Herald Sun Wednesday morning reports death toll now at 181 dead and has links to videos. ABC Online reports of further communities at risk as fires still remain out of control.

some photos from ABC Online: live weather conditions and maximum temps can be found here

Finally, no – even though I would love to have taken photos of the fires myself, it is far too dangerous a proposition and such amateur photojournalism during these conditions is highly discouraged. One of the common causes of death in bushfires of the past has been car accidents as drivers attempting to flee, blinded by smoke, crash into debris or other cars. Yesterday, many have been burnt to death in their cars fleeing their homes too late. These fires can cover 1.5km in 5 minutes in those conditions – only fools would be there unnecessarily.