The Grampians is a group of mountain ranges formed from uplifted resistant Palaeozoic sandstone bed making it one of the oldest mountain ranges in the world and the beautiful sandstone boulders, epic views and with access to native flora and Australian wildlife make it an iconic bushwalking destination for tourists from around the world.

You will see kangaroos, black wallabies, emus,  Australian birds such as tiny robins and wrens, parrot species, New Holland honeyeater, laughing kookaburra, wedge tailed eagles and the really noisy white sulfur crested cockatoos. While walking on a sunny day you are likely to see a range of small to medium sized lizards – mainly skinks (and hopefully not a snake – these are generally very shy and avoid tourist areas but are deadly if you step on one and it bites you – a great reason to stick to the paths where you can see where you are stepping!). If you are lucky you may see an echidna (a  monotreme) looking for ants on the side of the road at dusk. If that is not enough wildlife, or you want to get up close to a snake or other animal, you can visit the nearby Halls Gap Zoo – the largest zoo in Victoria outside of the urban districts around Melbourne.

This Australian National Park is the biggest national park in Victoria and covers 167,219-hectare (413,210-acre) and is situated in western Victoria and to the north of the volcanic plains which formed most of south-western Victoria. The forest is mainly dry sclerophyll eucalypt forest with an understory of tea trees with their white flowers dominating in spring.

The sandstone was laid down from sediments from rivers during the Devonian period 380 million years ago which forms a 7km thick layer of sandstone which then became uplifted, tilted and then eroded. When sea levels rose 40 million years ago, the sea lapped at the north-western area which now has become the Little Desert National Park. The Devonian period was a time of wooded plants, insects and amphibia but before spiders, reptiles, dinosaurs and conifers had evolved.

Aboriginal occupation of Gariwerd (their name for the Grampians) dates back more than 20,000 years and they had six seasons for the region – check out the Brambuk Cultural Centre for more information.

Towards the end of a decade of drought, a massive bushfire in Jan 2006 devastated 50% of the forest, but this allowed Parks Victoria to re-discover places such as Fish Creek Falls and design and create new bush walks such as the Grampians Peak Trail which so far is at Stage 1 and allows for 3 days / 2 nights walk with overnight remote camping.

Major flooding in Jan 2011 and heavy rain events again in Sept 2016, forced parts of the park to close for several months. Before you go, check the park’s website to ascertain which areas and remote camp grounds are closed.

I am pleased to report that the park now looks even better than before the fires and is an absolute pleasure to explore as long as you take the usual precautions of sun protection, wind and rain protection for those sudden late afternoon thunderstorms, plenty of water (2L per person for 2-3hr walks on warmer sunny days), and sturdy shoes. On hotter days, go early in the morning or late in the afternoon to avoid the extreme heat conditions which may prevail.

It is a two and three quarter hour easy drive from Melbourne, mainly along freeway and highways which allow for a nice coffee break half way in the small town of Beaufort. The more adventuresome with time on their hands might like to return via a longer and more interesting route either to the north through winery and historic gold field towns of Avoca, Maryborough, Maldon, and Castlemaine, or to the south to Dunkeld with its highly regarded Royal Mail Hotel restaurant, then the volcanic park of Mt Eccles, then to Port Fairy, the volcanic Tower Hill park and then along the Great Ocean Road and the Twelve Apostles and Otway Ranges.

The main tourist town in the Grampians is Halls Gap which lies in the valley and the shops and main camp ground are within a short walk to the beautiful Wonderland region. There are plenty of accommodation options but these can get booked out in peak seasons. There are dozens of kangaroos and maybe a few emus grazing in the camp ground and at the cricket ground, and as you sit and eat your dinner outside at the Harvest Cafe, you are likely to see a few of them hopping down the road at dusk.

Best time to go is in Oct-Nov when the spring wildflowers are at their best, the weather is not too hot and, to avoid the crowds, avoid school holidays, public holidays and weekends – although your choice of restaurants becomes severely limited, but your accommodation options increase and there are less people on the narrow winding roads and at the walks.

November can also be noisy cicada time – cicadas live most of their life underground (several years) as a nymph in burrows along a tree root from which it feeds on the sap. After spring rains and when the weather warms up, they climb a tree, latch on with their two big front claws,  and emerge from their nymph shell through the dorsum, leaving their dried shell and becoming green with transparent wings as adults. The rest for a while then for a few short weeks they join their mates in the trees, eating and creating a piercingly loud noise and mate before the females lay eggs and then die.

While I was there, a cicada had mistaken my car tyre for a tree and the nymph shell was on one side and the new adult cicada on the other: 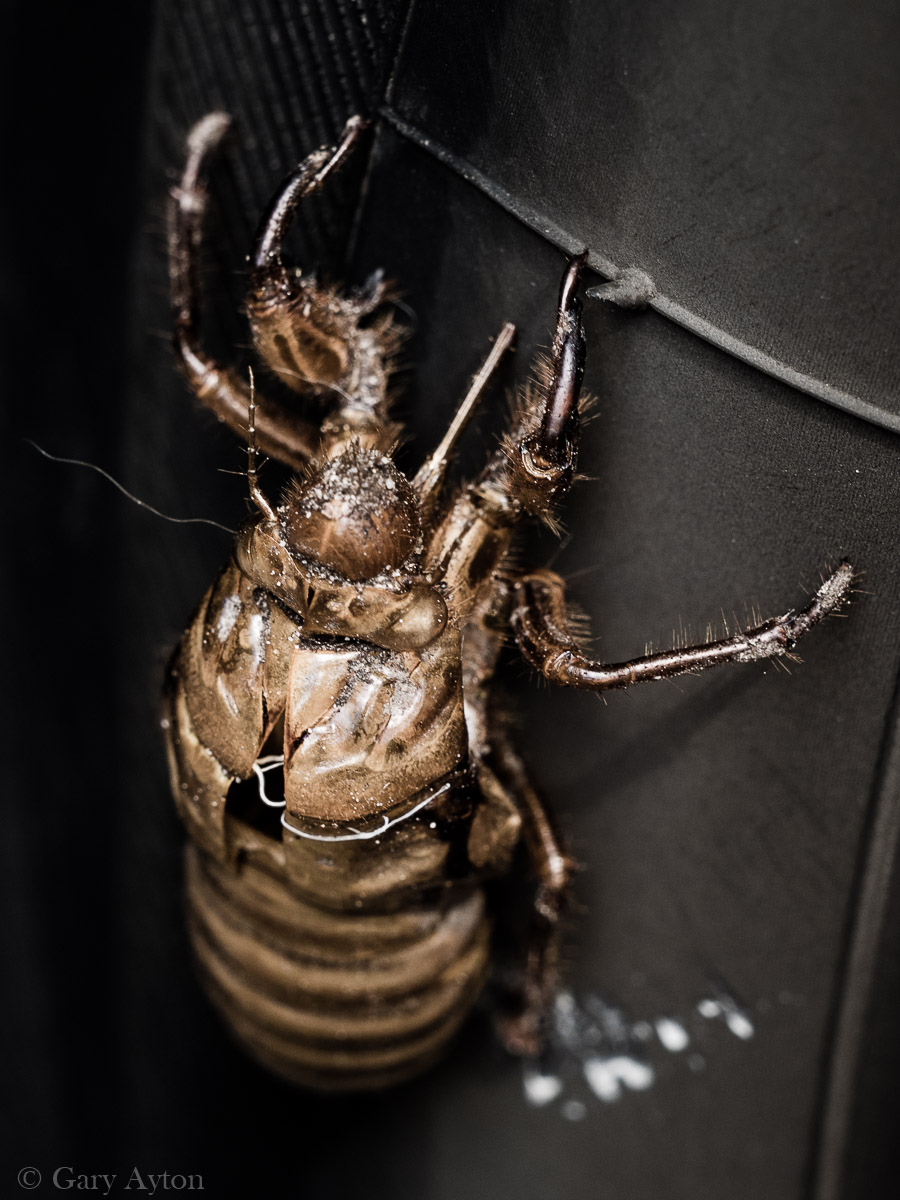 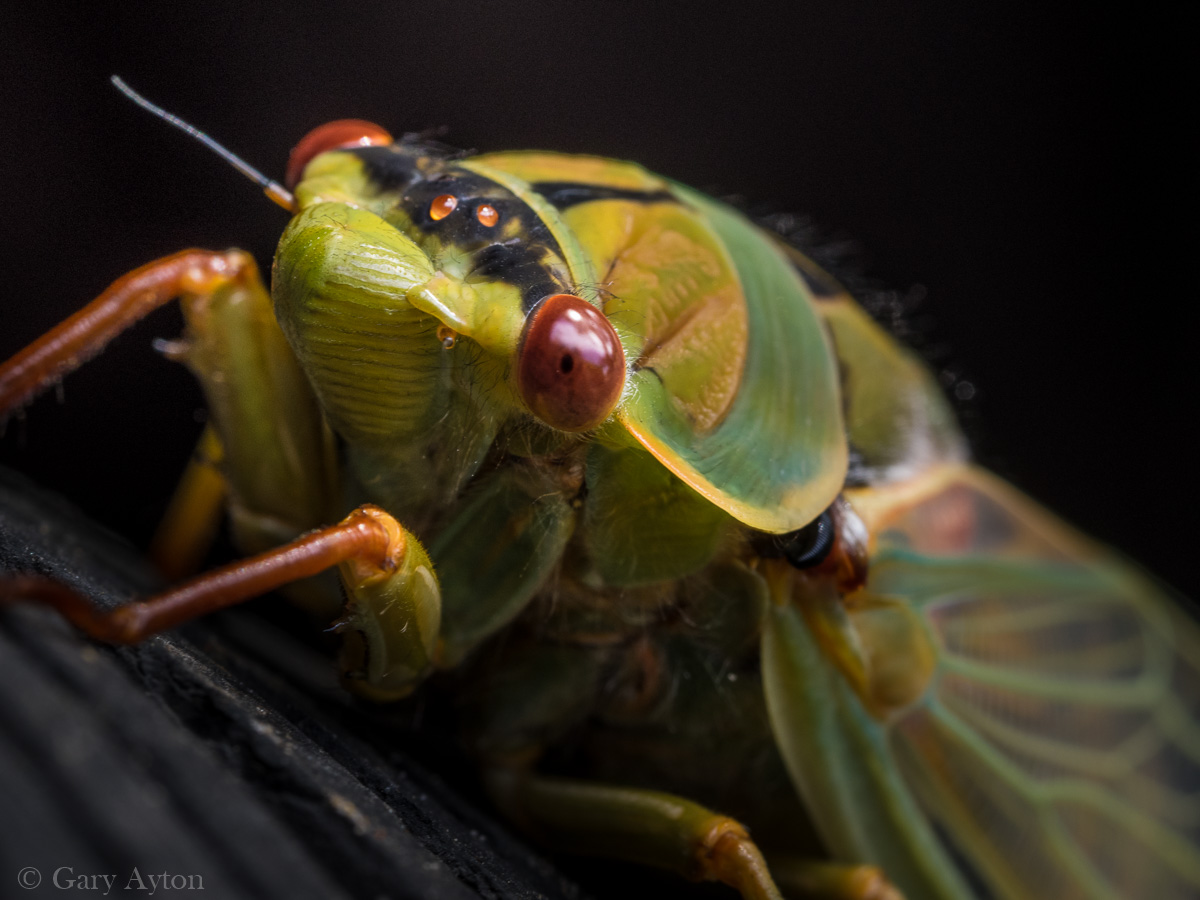 The newly emerged adult cicada – Olympus mZD 60mm f/2.8 macro lens at f/7.1 with some mild cropping as I didn’t want to get too close in case it flew away but in retrospect I probably could have got a close up of just its eye! 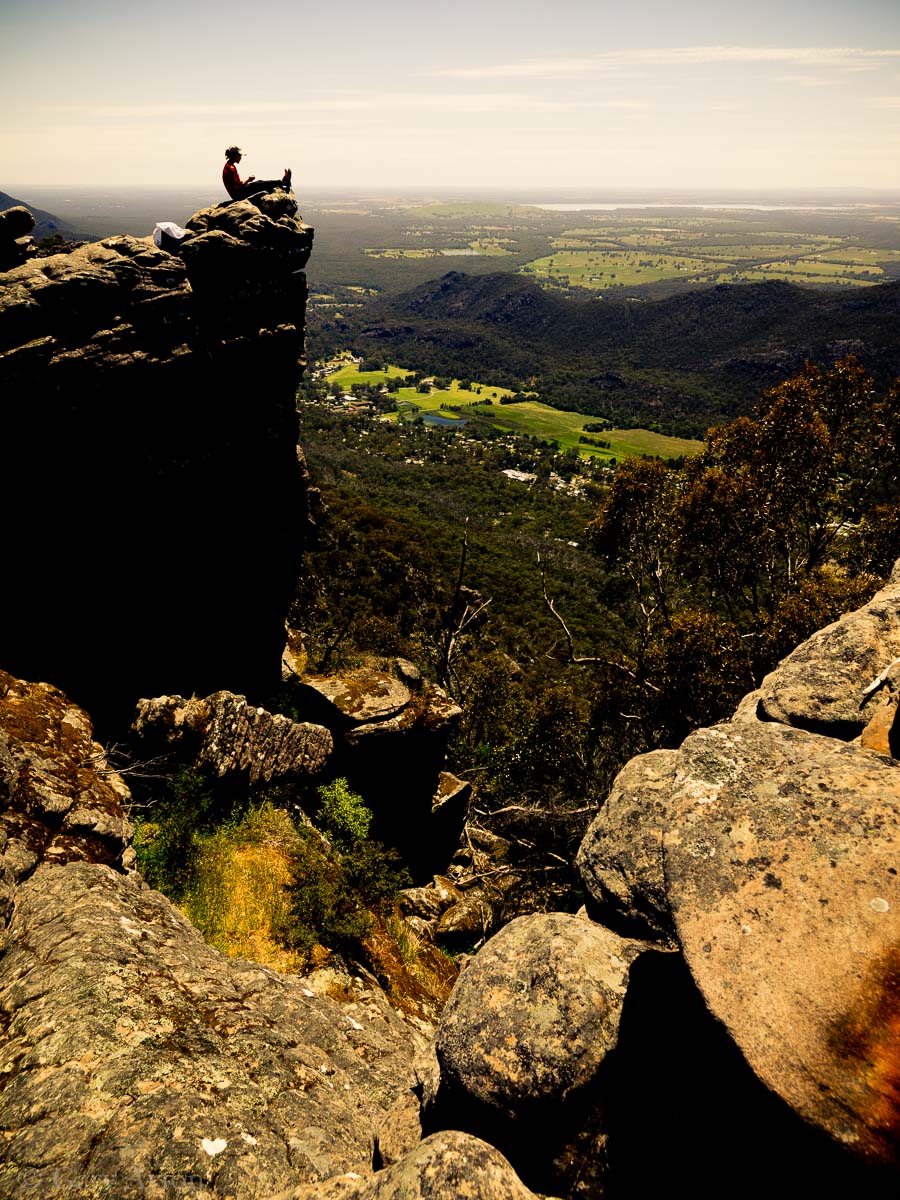 Perhaps the number one walk to do is the walk to the Pinnacles which gives a great expansive view over Halls Gap and the valley looking eastwards and if, as with this young lady, you wish to partake in some daredevil mindlessness you can sit and enjoy the view from the adjacent protuberant cliff face edge. The actual Pinnacle is a protuberance which has fences to reduce risk taking behaviours.

There are several options to walk to the Pinnacle, all of which require rock hopping, rock steps and sun exposure, but are well worth it, and within the capability of most people – even sedentary ones as long as they can walk up steps and negotiate rocks: 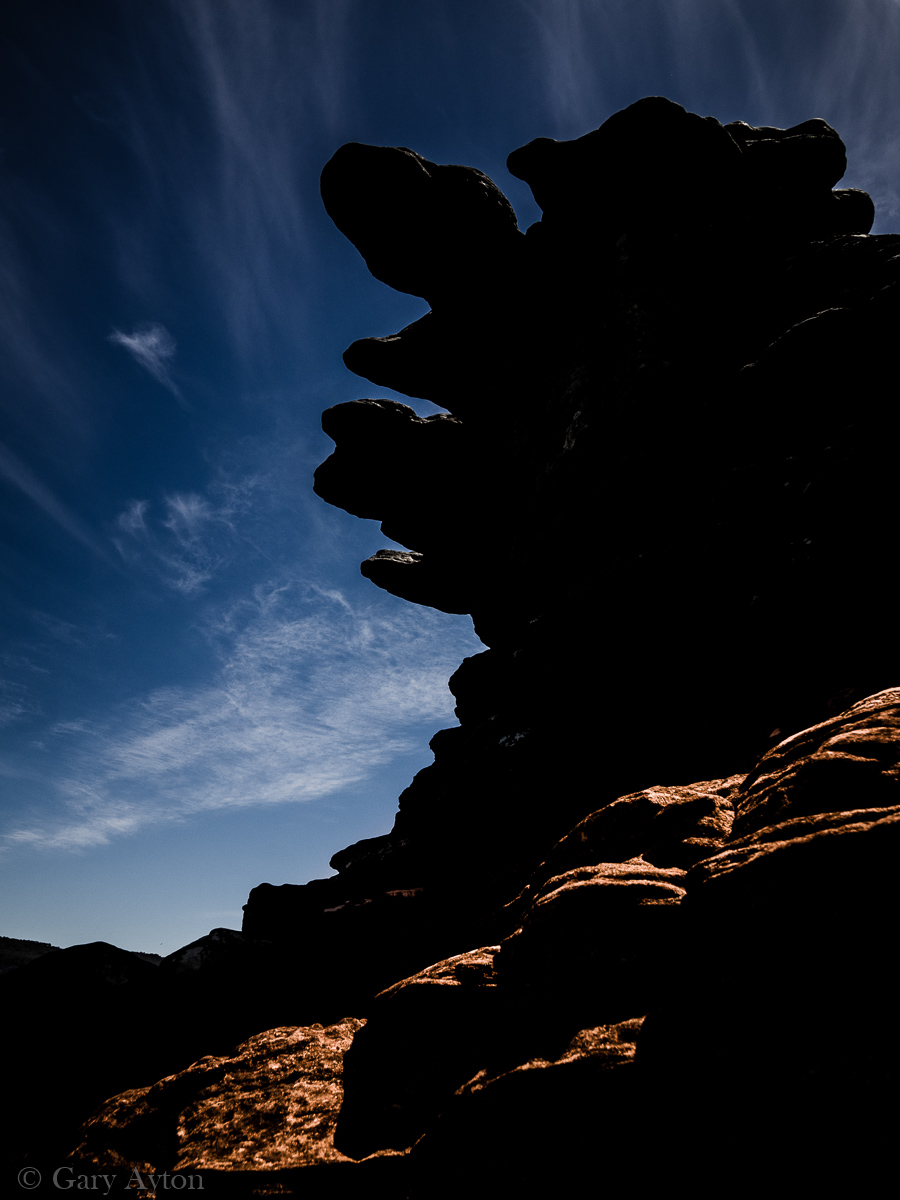 On a hot sunny day with cirrus clouds and blue skies, drink plenty of water, wear a hat and sunscreen, but don’t forget to look for contrasty dramatic rock formations such as this one, but make sure you watch where you walk as it is easy to miss a deep ravine, step on a poor skink, or sprain your ankle! 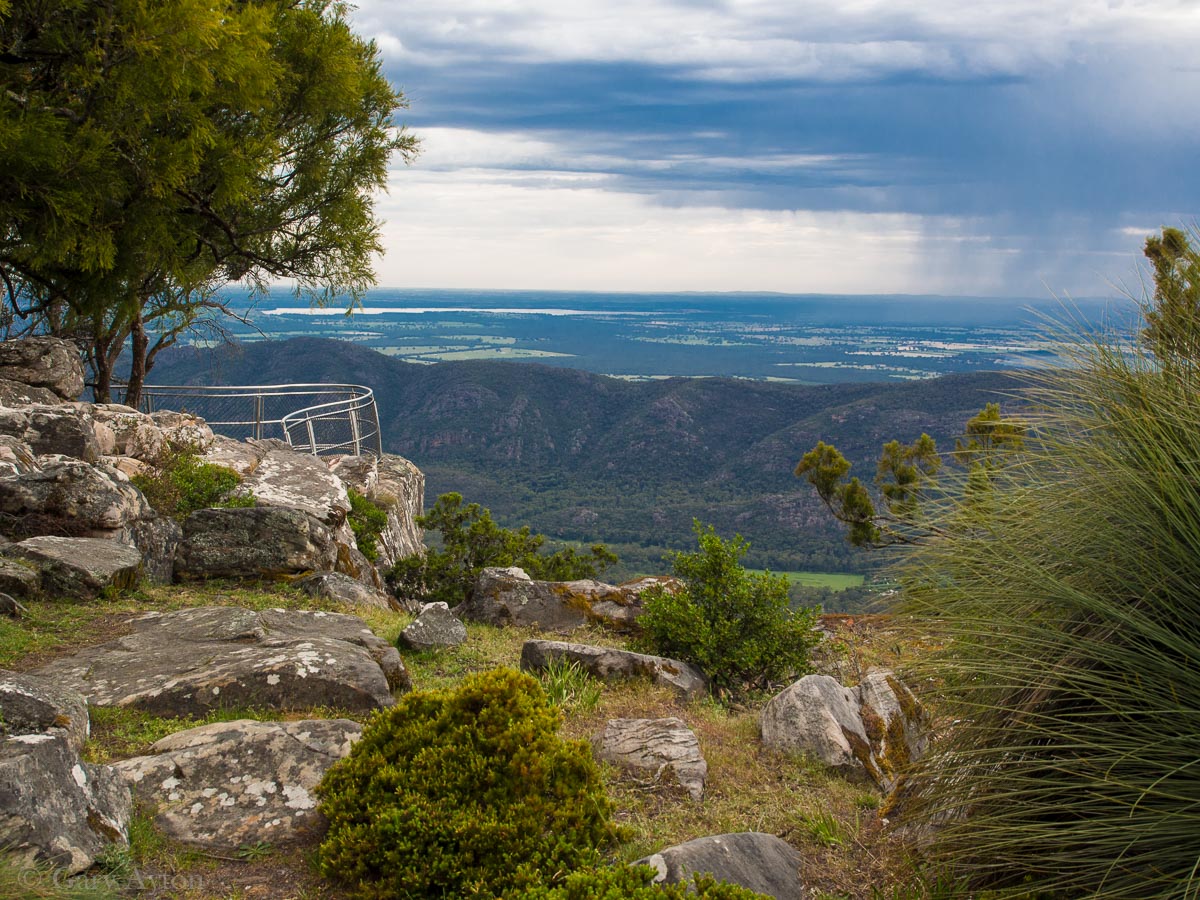 When there is a strong, hot, north wind blowing, a better option may be the walk to Sundial Peak which is more sheltered from the wind and provides more coverage of trees in the event of lightning which tends to come on such days. The Sundial Peak also looks out over Halls Gap but being more south than the Pinnacle, it overlooks Lake Bellfield, although the Pinnacle cannot be seen from this lookout. The walk from Sundial carpark to the lookout is 4km return, allow 1.5-2hrs and ascent is only 115m making it more friendly than the Pinnacle walk. 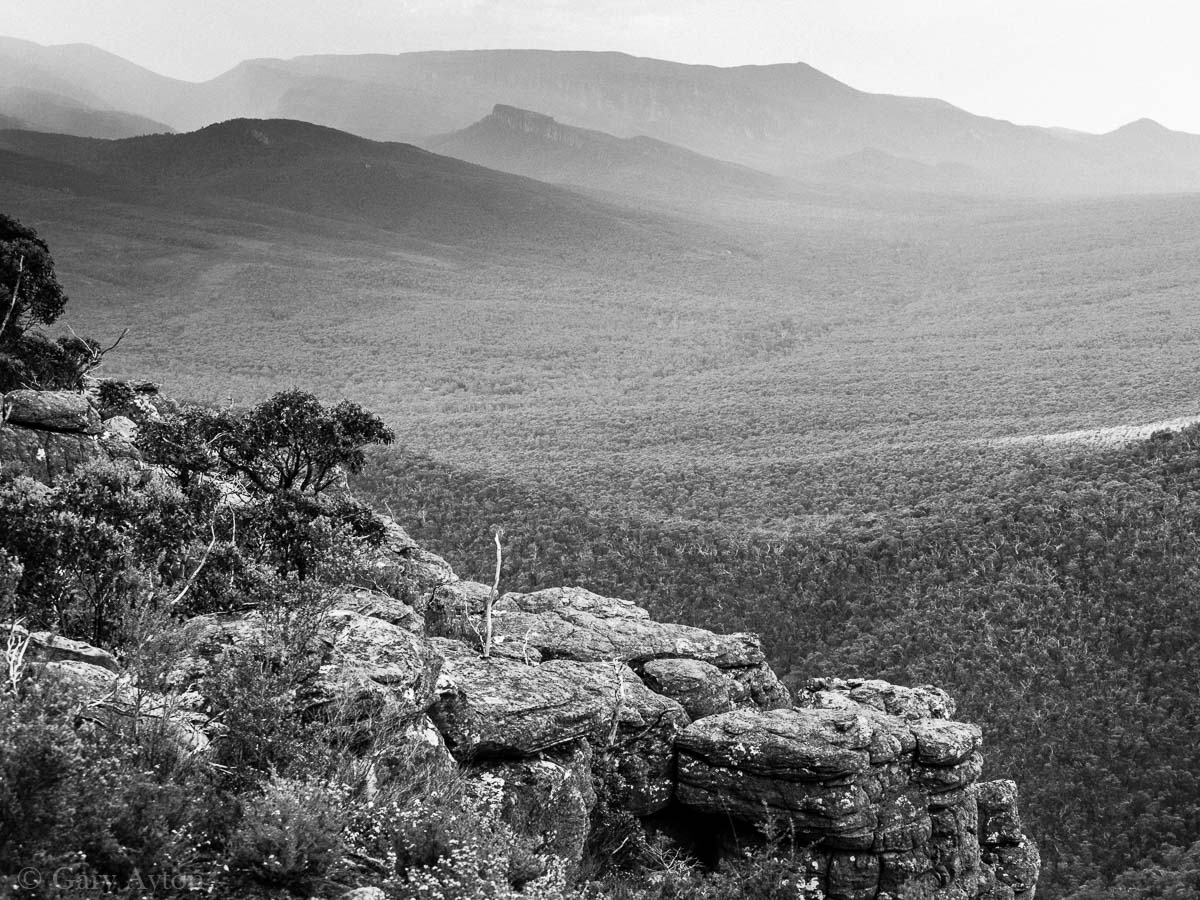 You do also get lovely views to the south down the valley from the Sundial Peak. 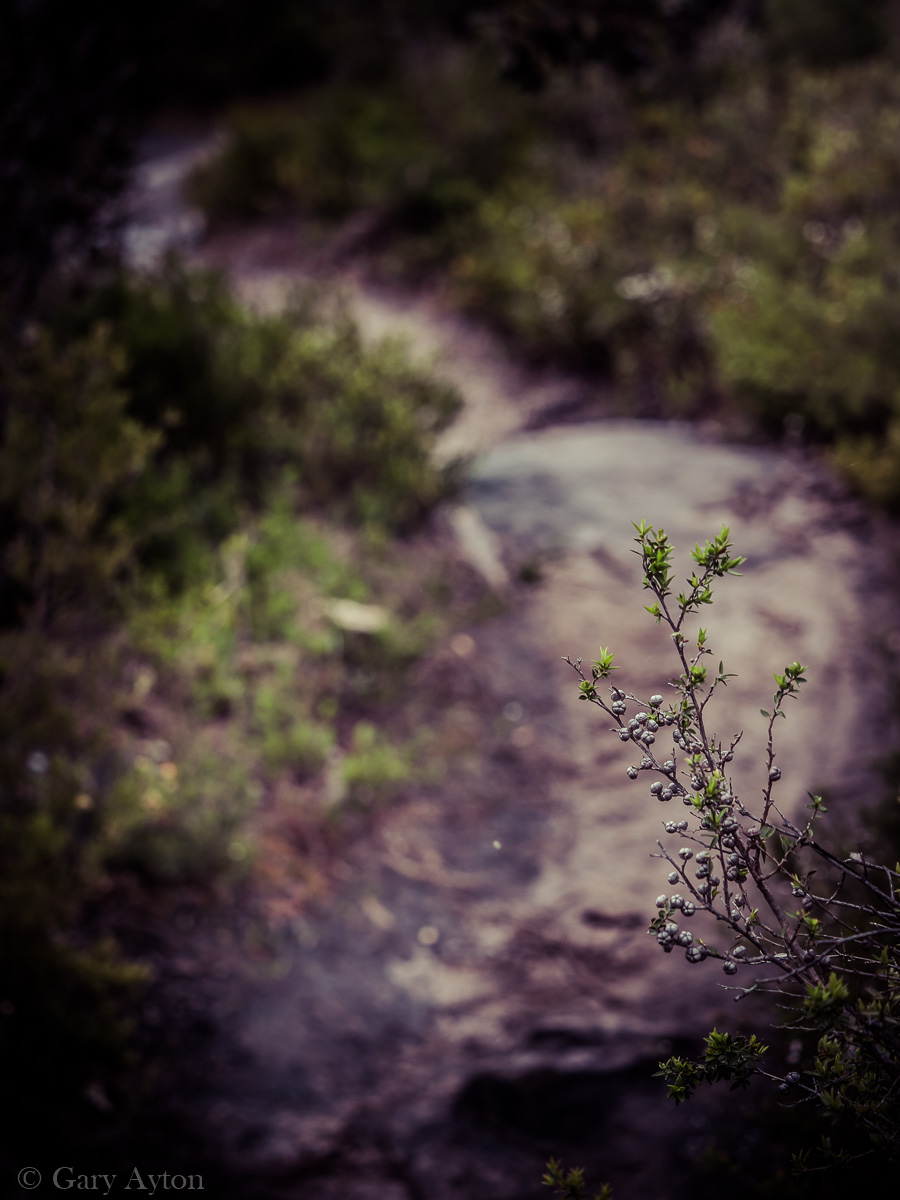 The Sundial Peak walk early in the morning when no one was around – but I did get caught in a thunderstorm! 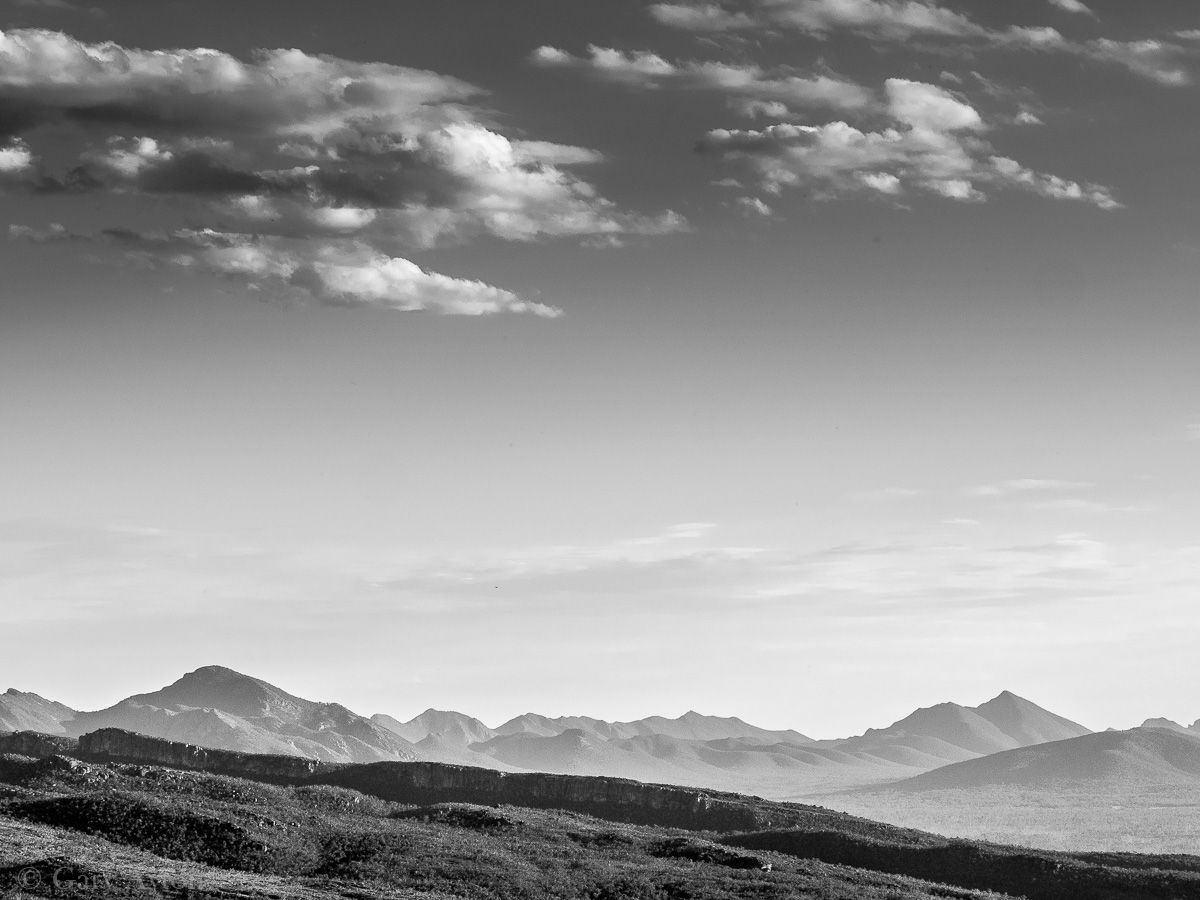 After your walks and you have had dinner, head up to Reed’s Lookout and The Balconies for an epic sunset view looking south across Victoria Valley. Be warned though – even mid-week, you will not be alone! 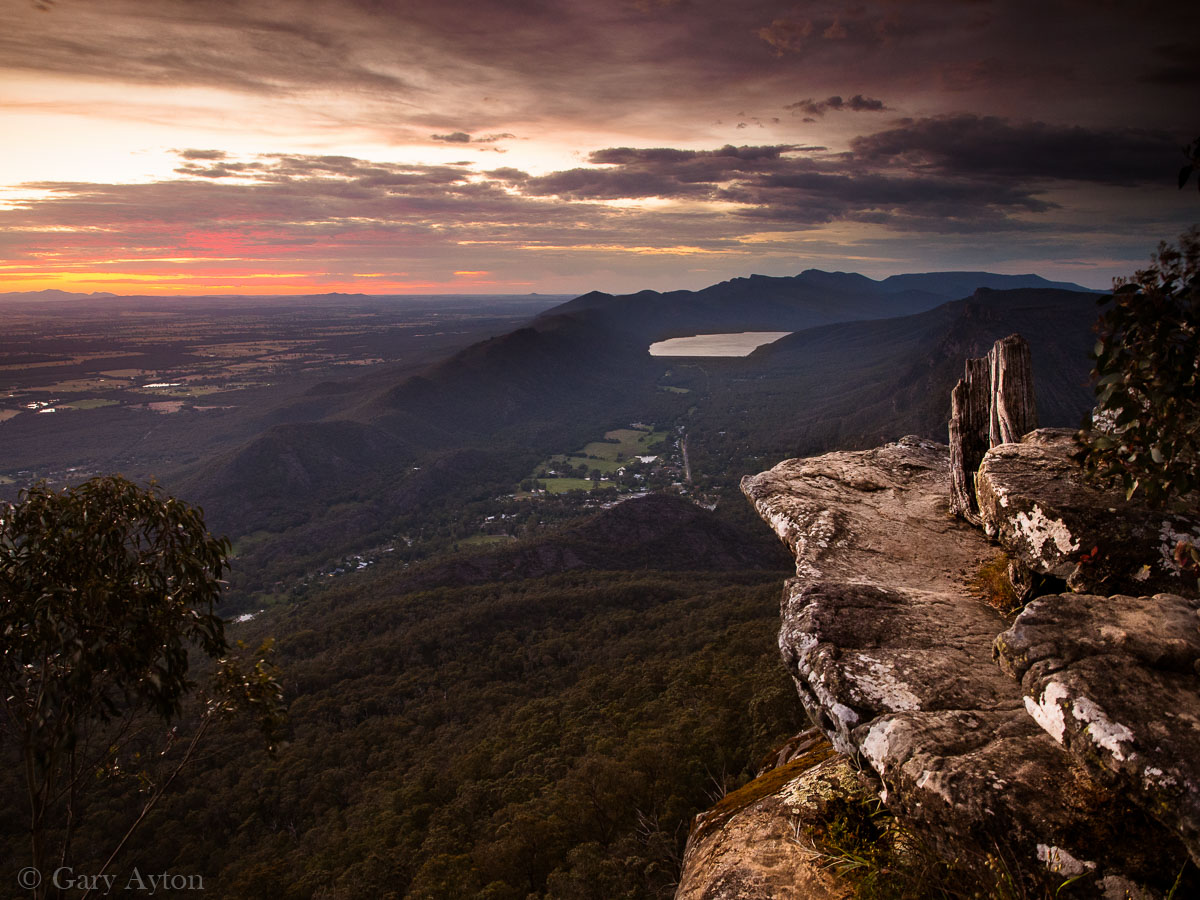 If you are enthusiastic get up well before sunrise, drive the 20 minutes or so in the dark to Boroka lookout which faces east overlooking Halls Gap, for some shots BEFORE the sun comes up – I was lazy and couldn’t be bothered using a tripod and just relied upon the Olympus OM-D E-M1’s awesome image stabiliser plus used a Reverse ND gradient filter to help reduce the contrast at the horizon. 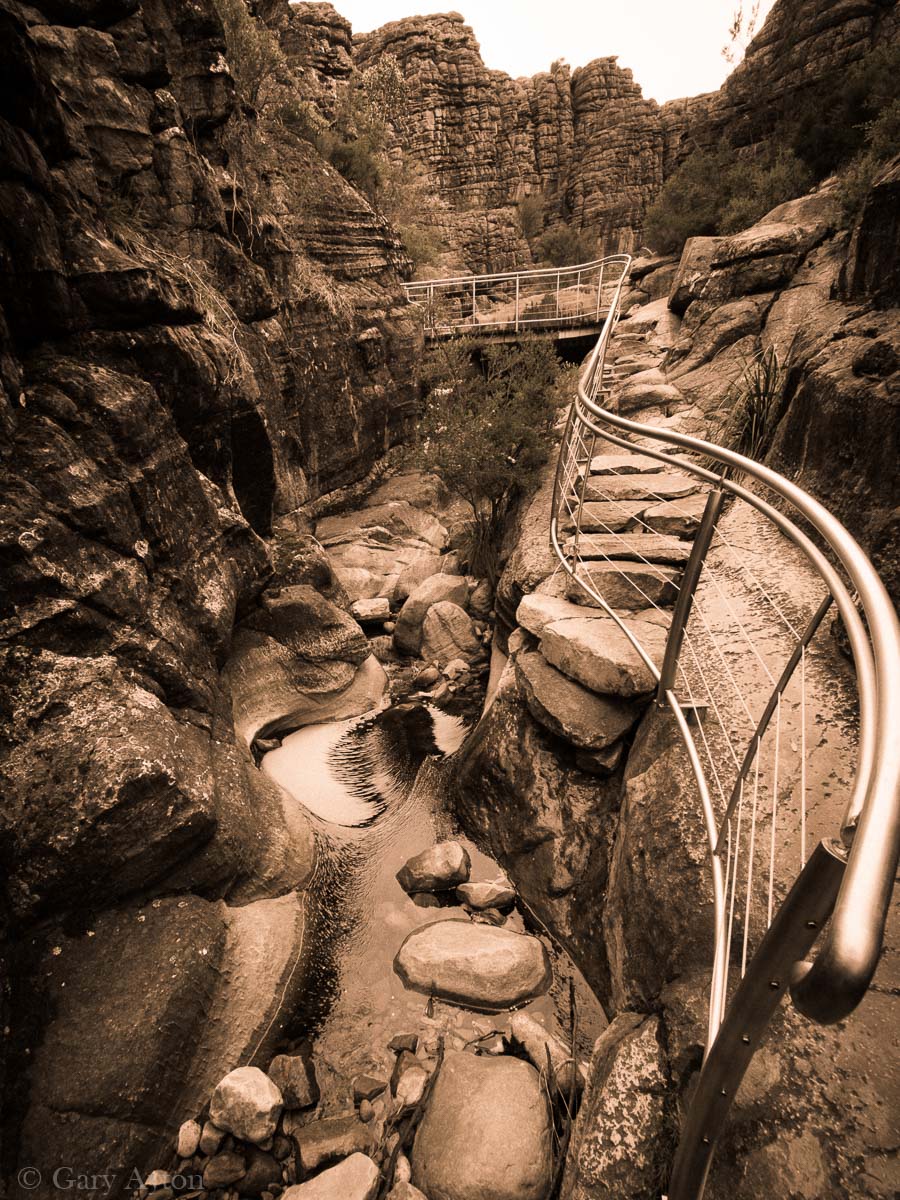 The “Grand Canyon” short circuit within the Wonderland on a cloudy day with the Olympus mZD 7-14mm f/2.8 lens at 7mm and f/8.

This is a first post on the Grampians and I have only touched the surface – the main tourist attractions – although I didn’t get to go to the Zumsteins and Mackenzie Falls on this trip.