I come from a long line of broken Olympus promises when it comes to useful continuous autofocus capability.

Olympus have had C-AF and their even less useful C-AF Tracking modes in nearly every digital camera I have owned – C8080, E330, E510, E-M5 and E-M1 mark I – and sadly, they have all sucked when it came to continuous autofocus on a moving subject, although the E-M1 mark I was a big improvement. Even my super expensive Canon 1D Mark III dSLR AI-SERVO AF mode which was designed for pro sports photographers had sub-optimal AF in this regard.

So, you can see I am used to being let down in this area and was preparing myself for another disappointment.

This weekend it is Melbourne’s Moomba festival and a big part of it is the water ski-ing championships on the Yarra River.

So now I have this opportunity to test out the new Olympus OM-D E-M1 Mark II flagship sports camera from Olympus with their truly amazing Olympus micro Zuiko Digital (mZD) 300mm f/4 OIS lens which makes a comfortably hand holdable kit for the whole day giving 600mm telephoto reach at f/4 aperture with over 6 stops image stabilisation – which may have been a factor in image quality given I was panning madly all day as if I was a tennis umpire.

I am not a sports photographer and this camera does allow a number of settings to allow you to optimise AF algorithms – I left these at their default value, but I did create an in-camera focus range limiter – a novel and unique functionality peculiar to this camera – you can effectively speed up AF and have it ignore the crowds in the background or any foreground leaves. I did find a weird quirk though – the C-AF Tracking mode seemed to ignore the focus limiter settings, so I resorted to C-AF which is almost certainly the thing to do with this camera anyway! You can rapidly disable the in-camera focus limiter by applying a lens based focus limiter – this was handy at times.

The other amazing thing with this camera is the insanely fast electronic shutter burst mode of 18fps with full C-AF, and you can also enable the Pro-Capture mode which I did at the end for the jumps as I lost sight of the skier behind the jump, but Pro-Capture ensures I did not suffer any reaction lag by capturing the 14 frames prior to pressing the shutter – this will be an essential feature for pros one day!

Thus, I shot all my shots in Aperture Priority metering at f/4, Picture Mode = Vivid (I probably didn’t need to do this to improve CDAF speed as for this work we are using the PDAF sensors), Silent Burst Low rate (18fps), with C-AF using the central 9 AF points (the full area seemed less reliable – I hope Olympus add a larger region than just 9 to choose from as getting your subject in this area is critical for AF success!). Depending on whether the skier was front-lit by sun, or backlit, I would adjust the exposure compensation a touch.

When the skier came along I just composed to have them in the AF region, then held down the shutter as I panned – almost no EVF blackout made this possible with a little practice and getting used to the skier’s rapid changes of direction.

At the end you do have to wait for the burst of RAW files to empty from the buffer before you can review them – I just used one card so I could more quickly review them in camera and delete the duds (there were many where the skier was well away from the AF region and thus out of focus – but that was my lack of skill not the camera’s fault). If I wrote a RAW to one card and JPEG to the other card, I would have had to separately delete from each card which would have been a big pain. then passing behind a tree branch as I panned madly to keep up with him: 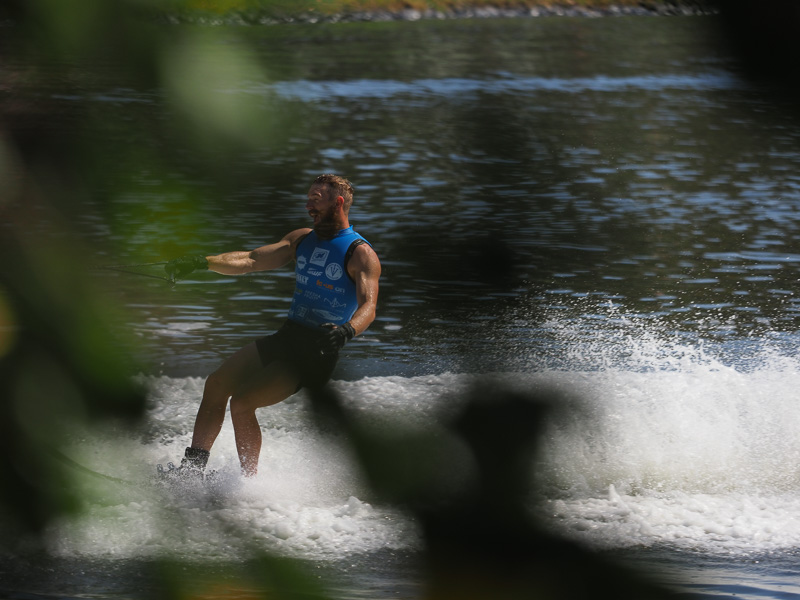 Well that was an unexpected awesome surprise! It worked!

Now, the hard one – a 1.5 sec sequence at 18fps with skier covering 50m camera-to-subject distance:

This sequence was shot in much lower light as dark grey storm clouds gathered and blocked the sun, but at least I didn’t have to shoot directly into the sun which could have made the AF more challenging.  This sequence is essentially straight from camera just resized for web. The 15th frame, still keeping her in focus despite me panning away: 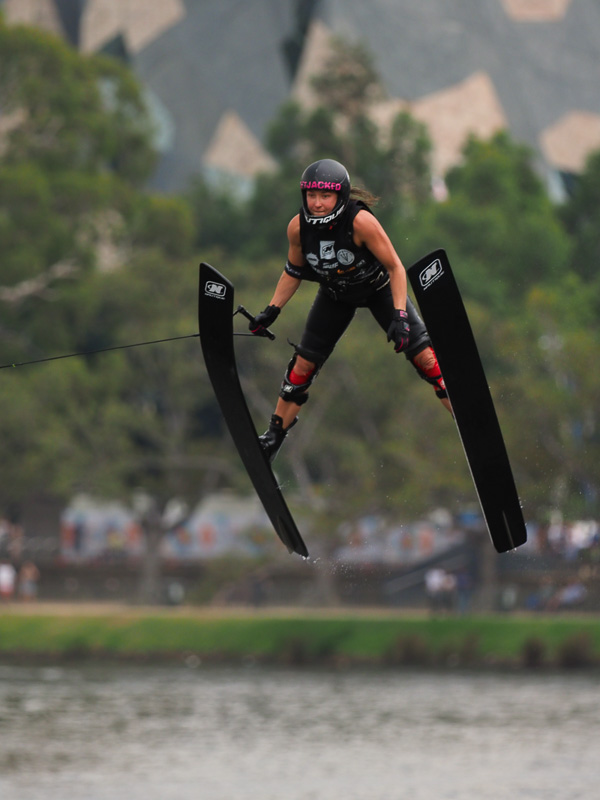 Preparing for her landing, 22nd frame, still in reasonable focus – I think the horizontal distance covered was some 45-50m from what the commentators said: 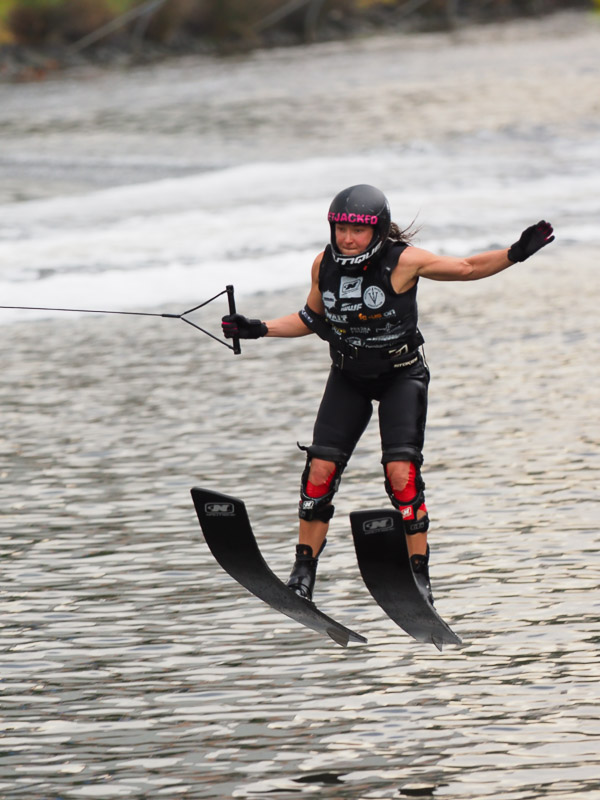 Yes! a safe landing, 28th frame, acceptably in focus – of all the 28 frames, only 2 were grossly out of focus, and they were mainly because my panning let the subject leave the AF region while the subject was coming towards me very quickly! I don’t know about you but that craps on my Canon 1D Mark III and what’s more, the image quality in terms of subject sharpness was better than what a fellow I met there who shoots the event every year achieved using a Nikon D3S pro dSLR with a big, heavy Tamron 150-600mm lens which I am guessing is not as sharp wide open as is the Olympus lens, plus the old D3s only as 12mp not 20mp to play with as does the Olympus – but I presume it would beat the Olympus kit when the light faded, plus he had an advantage of being able to zoom out.

OK, I am satisfied – at last Olympus have a winner for sports photography, and the 18fps is really cool, plus being electronic, it doesn’t wear out the mechanical shutter mechanism! Just be prepared to weed through the images and discard those you don’t want, otherwise you will end up with 20-40Gb easily in an afternoon.

Now the technical stuff is addressed, here are some cool beginner shots:

You can click on these for larger size views.

In addition to applying some vibrance, and clarity in LR, the following have all been cropped as even with 600mm effective focal length, they were too far away – feel bad for the full frame guys trying to do this! This were at ISO 400, f/4 and around 1/2000th – 1/6400th sec. In retrospect, in bright sunlight, I should have used ISO 200 to get a tad more dynamic range and image quality, or used auto ISO and shutter priority at 1/2000th sec. Cool as she can be: 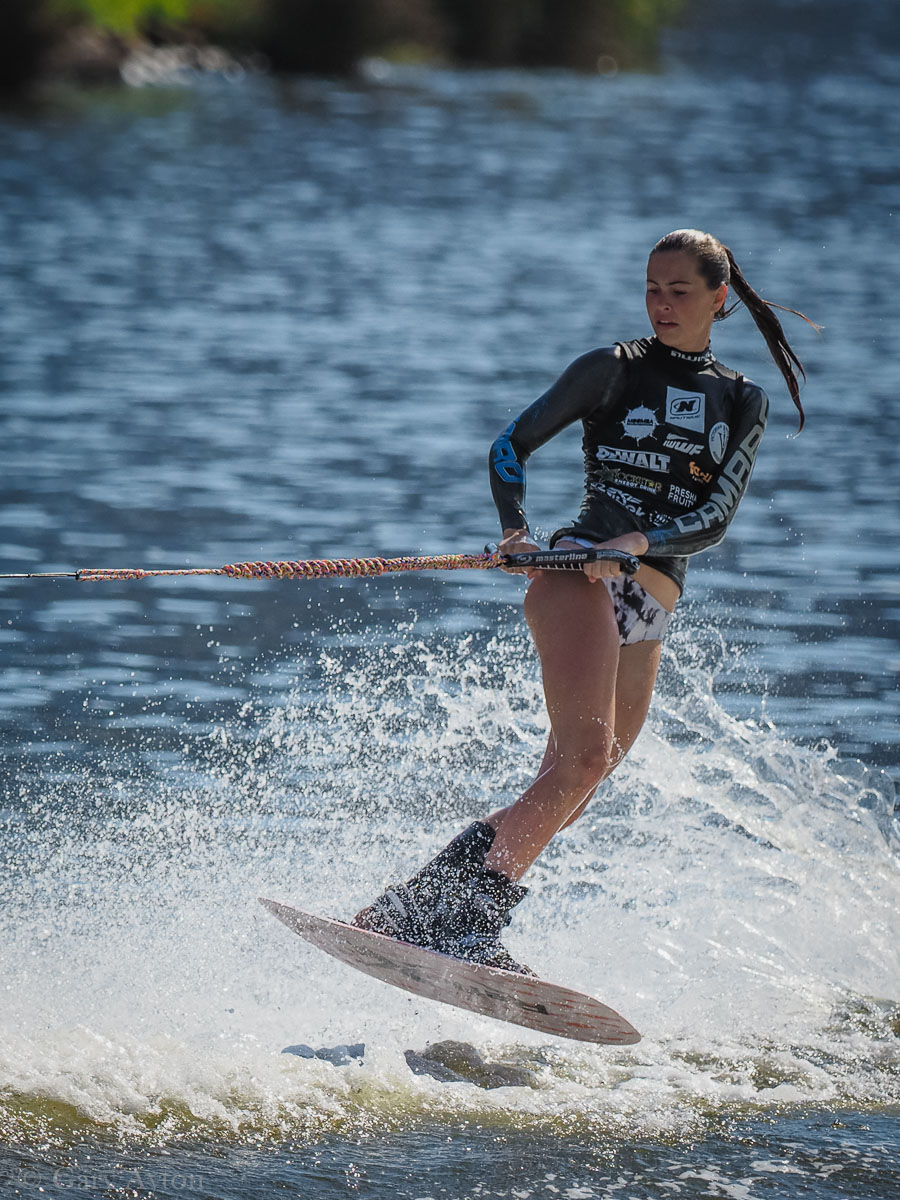 Ooops, lost the rope – this is why 18fps beats 10fps – you get to capture action in more detail within the time window: 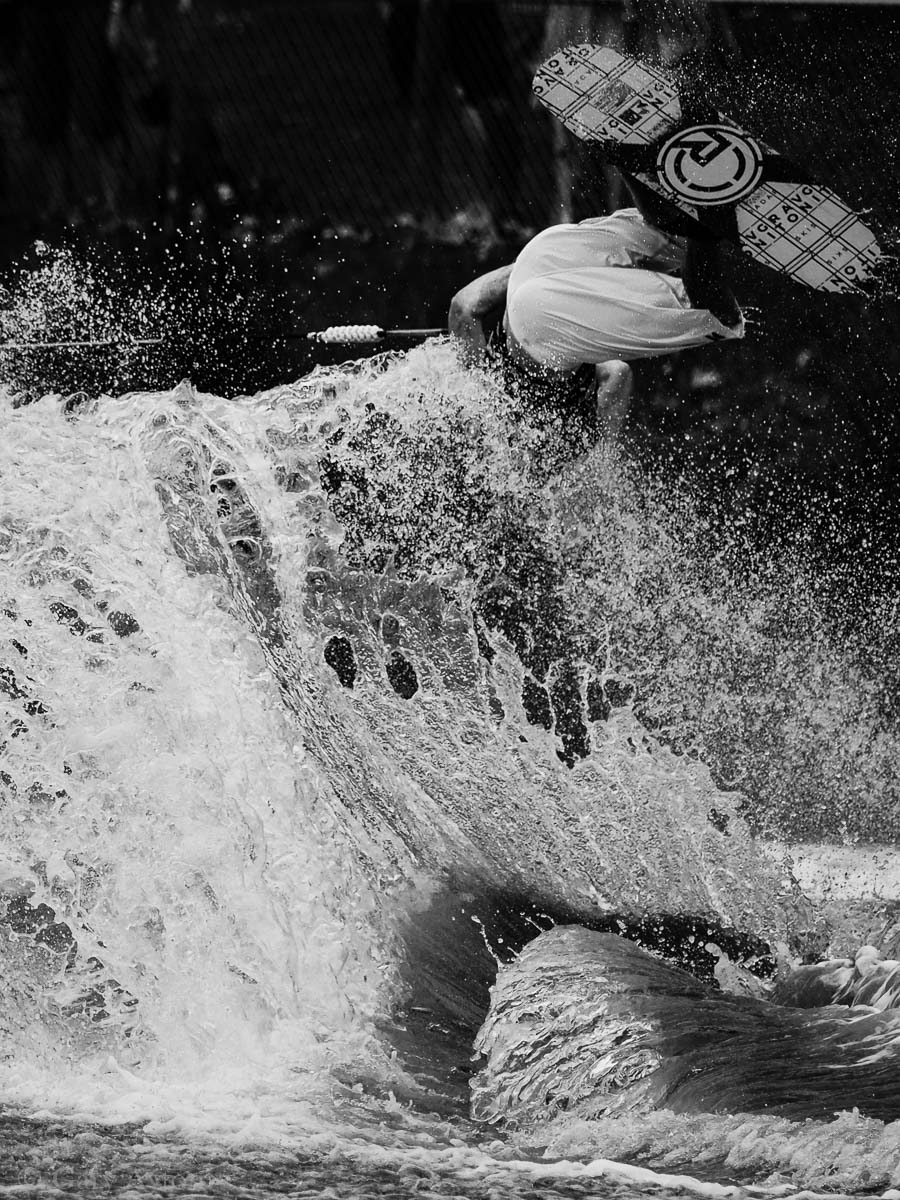 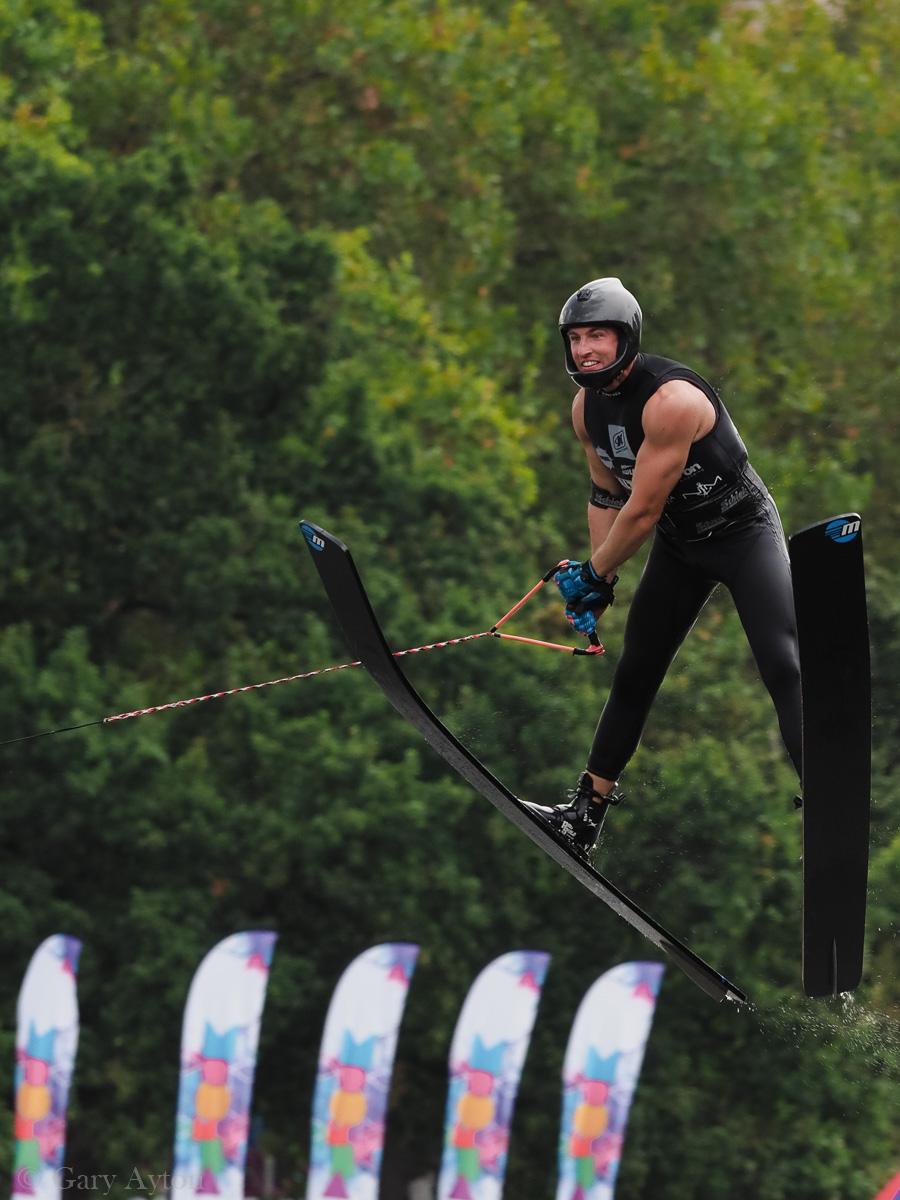 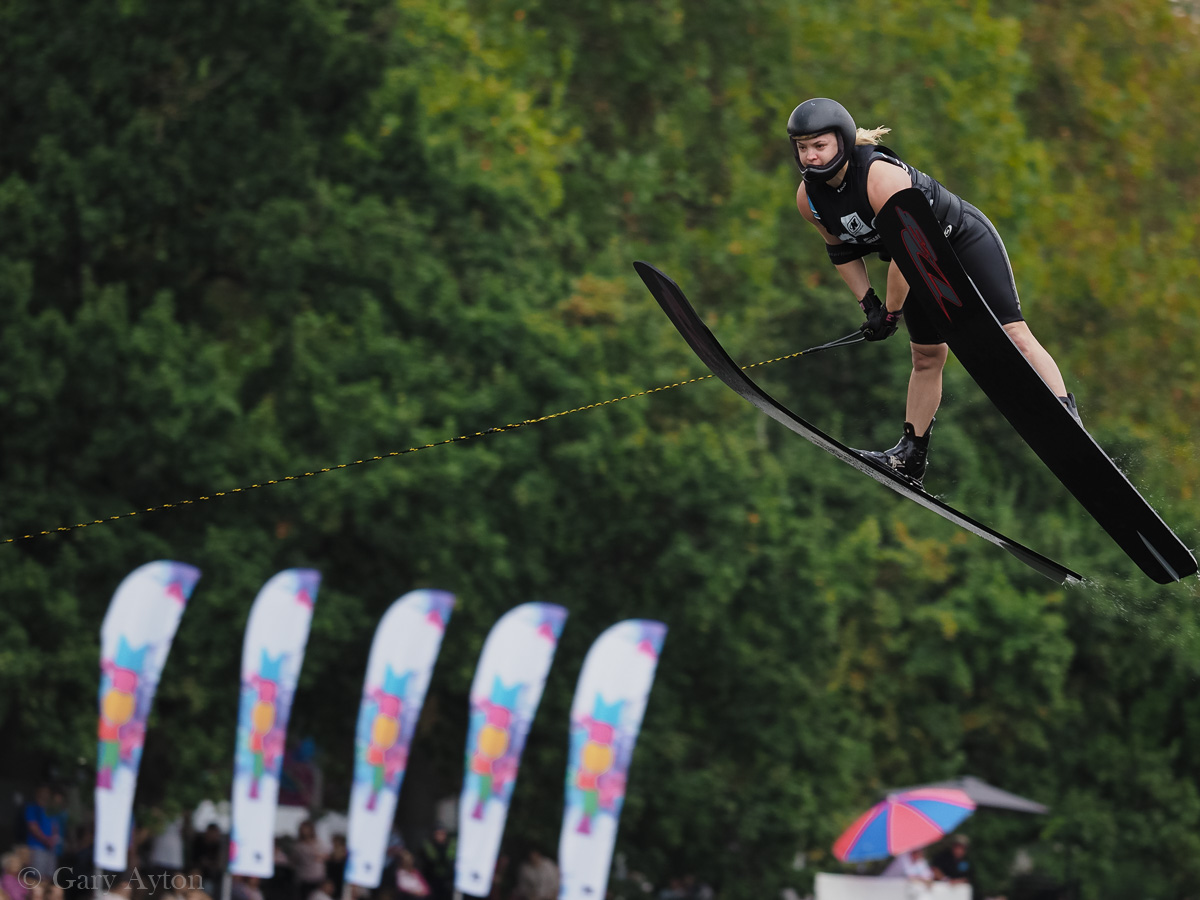 No major issues with rolling shutter from the electronic shutter and me panning horizontally with near vertical lines- Olympus has this well controlled although you can demonstrate it if you try hard.

Perhaps Canon and Nikon should be worried – how are they going to integrate 18fps into their sports dSLRs without really giving their mirror system and their mechanical shutters a real working out every time, not to mention the noise from the mirror slapping around!

And, don’t forget, I could have gone to a really insane 60fps with this camera if I didn’t need C-AF – Canon and Nikon could build a dSLR with this but you would have to resort to Live View and hold the camera away from your face to view the rear screen – not great for camera shake!

But if the Canon and Nikon guys are prepared to shell out $20,000 for their pro dSLR plus 600mm f/4 OIS lens, then they could get more background blurring, and shoot at lower light levels thanks to their lower noise at higher ISO – but then carrying this 7kg kit and a monopod around all day would be heavy work indeed! The E-M1 Mark ii plus Olympus 300mm f/4 gives same field of view with faster burst rates plus the option of awesome image stabilised 4K cinematic video and weighs only 1.8kg and costs around 1/3rd the price.

I do though have a couple of firmware suggestions for Olympus:

One must set the AF Limiter range in meters via the menu system.

Although you could guess a focus range to use such as 10m to 50m and then test it to ensure your subjects will be able to have AF lock achieved.

There is a much more accurate way – use the other novel functionality – use the Preset MF mode to measure the distances accurately for you!

Set AF mode to PreMF and while in the settings mode, press INFO button, and then half-press shutter to lock AF on various distances, and for each, you will get a read out of the camera to subject distance with 0.1m precision – just what you need when shooting in an aquarium and you wish to ignore the dirt on the glass!

Put your AF mode back to C-AF.

Use the distances to dial into the AF Limiter menu settings (you can store up to 3 AF Limiter ranges).

To rapidly disable the in-camera AF Limiter (eg. you decide to shoot something different), you have several mechanisms:

The world is full of millisecond events which all blur in our minds, or we just don’t notice, or perhaps just have an overall gestalt perception – this Olympus camera’s 18fps and 60 fps modes opens up this world – I never really noticed the skier losing grip of the rope during the somersault, my mind barely could take in the somersault itself as it was over and done with so quickly – but this camera caught that moment in time – you just have to be there and be ready – and with pro Capture mode you can even capture the milliseconds before you pressed the button – just awesome!

C-AF is finally there and works extremely well even at 18fps – I am impressed!