Milky Way astroscapes are great fun to capture but they are one genre of photography where meticulous planning, gear selection, good fortune and substantial post-processing are required to obtain reasonable results – this is not one for a smartphone to attempt!

My head to head competition – Olympus vs Sony full frame

As I do not have a wide aperture, ultra wide angle full frame lens for the Sony a7II full frame mirrorless camera, this little competition is a little unfair to the Sony as the chosen lens is the superb, very heavy, bulky, ultra-expensive ($3000+) Canon TS-E 17mm f/4 tilt-shift lens.

The Olympus combo gives a number of advantages:

Click on the images to view larger versions, note there is mild green auroral glow on the horizon in the centre, while there is light pollution glow from a nearby city visible on the right side of the Olympus image.

Well, this was extremely unexpected for me!

Theoretically, the Olympus image is just a fraction over 0.5 EV more exposure thanks to the 30 secs exposure allowed vs 20secs for the Sony, but the image is far brighter and with much less noise, this is partly explained by the western sky being significantly lighter in the earlier Olympus image (although not that noticeable to the naked eye) which partly explains the brightness difference, and the “brighter” stars near the horizon in the Sony image.

Both images had in-camera long exposure noise reduction enabled, white balance set to 3400K but no post-processing in Lightroom other than resize for web for the full image, and cropping for the cropped images, with both having identical LR default noise reduction settings of zero luminance and 25 for color, while sharpening was the LR default of 25.

On the cropped images, there is some star trailing on the Olympus image, so if you are really fussy about this, then you may need to restrict exposure to 20secs and perhaps use ISO 3200.

As a result, I didn’t bother processing the Sony images, and here is an example of another Olympus image with some light painting with an LED torch during the exposure, which has had significant post-processing – but even this will be too dark for printing, and needs to be brightened substantially for most prints – depending upon personal taste of course. 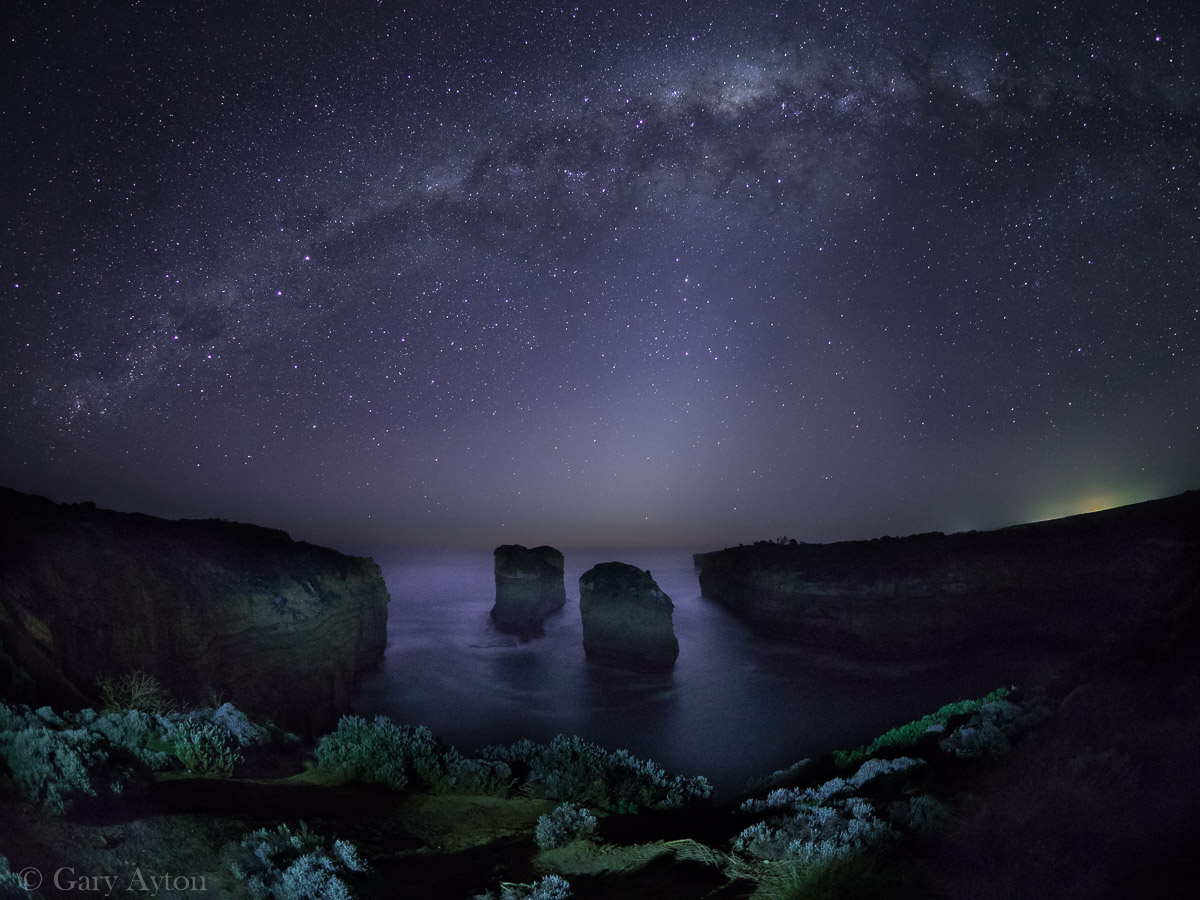 Unfortunately, the Sony cameras do have the “star eating” issue outlined in the previous post here.

For quick and easy single shot, then the Olympus 8mm f/1.8 fisheye is a reasonable option and one could use an old cheap, Olympus OM-D E-M5 camera (you don’t need the E-M1 II for this) – hopefully someone will bring out a 7mm f/1.4 non-fisheye lens with minimal aberrations for even better results, although if you are happy to do pano stitching , then the Panasonic 12mm f/1.4 lens is worth considering.