What have we done? Where have all the insects gone? Is this the beginning of the end?

I live in southern parts of Australia, and if you live here or traveled here in summer – you will only be too aware that our environment is filled with insects, so numerous that they are often very annoying – particularly when it comes to our famous bush flies which do what they can to get to the tears of our eyes to get enough protein so they can produce eggs, and to our mosquitoes – although thankfully down here away from the tropics they do not spread malaria or dengue fever.

Nearly all houses have insect screens to allow the evening summer breezes to cool them while keeping the mosquitoes out.

If you are driving home on country roads at night in spring or summer, you can generally guarantee your windscreen and front of car will have thousands of dead bugs caked on by the end of your trip.

In fact, the bush flies are so annoying in summer, I try to do all my outside activities before December and after March as much as possible.

It was only March 2016, when we had a plague of mosquitoes in Melbourne.

This is what has characterized my experience with insects for all of my life. Sure, some years are “worse” for flies that other years – but you could always guarantee they will be there as soon as the sun comes up and worse when the humidity rose.

BUT THIS SUMMER AND AUTUMN IS DIFFERENT – THERE ARE ALMOST NO FLYING INSECTS NEARBY!

I have a cat, and cats like to go outdoors at night whenever it takes their fancy and then come in, and as anyone who has had a cat without a cat door will know, this necessitates getting up dozens of times every night to let her out and let her in. Now my cat doesn’t go prowling as I have built structures to keep her contained – so, yes environmentalists, cats are bad for our native species, but I keep mine under control – after all she is a Russian Blue and I can’t afford to have her roaming.

For the whole of this spring, summer and even now into autumn, I have been able to leave the door open all evening until midnight each night – with the lights on in the house, no insect repellents or screens.

I have yet to be bitten by a mosquito and the total numbers of insects around the lights inside the house I would be lucky to count on one hand at the end of the night – not much fun for my huntsman spider!

I have been going for evening walks down to my local national park where there is a river in a valley and I have walked at dusk, well after sunset along the river wearing shorts and tee shirt – no insect repellent – still not bothered by even one mosquito!

I do a lot of nature walks looking for photographic opportunities and normally wear wrap around sunglasses to keep the flies away from my eyes – this year, hardly a fly has bothered to annoy me.

So far it seems the Australian bull ants in the national park have not been affected – but perhaps most of the other species have and perhaps the beautiful birds there, the blue wrens and their friends will soon run out of their food supply and struggle to survive.

Is it just me getting old and I can’t see them anymore and can’t feel them? Whatever, it is, my empirical observations are certainly not scientifically robust enough to cause alarm in themselves.

However, it does seem that we are in the midst of a massive long term decline in insect numbers globally – and its not just the bees!

THE GLOBAL DECLINE IN INSECTS

We have heard in the media reports of world wide bee deaths over the past few years, but the reports of the general massive decline and presumably mass extinctions of many species of insects worldwide have not really been prominent.

In 2012, A major survey of threats to insect life by the Zoological Society of London, published in 2012, concluded that many insect populations worldwide are in severe decline, limiting food supplies for larger animals and affecting ecosystem services like pollination. In Europe and the United States, researchers have documented declines in wild and managed bee populations of 30 to 40 percent and more due to so-called colony collapse disorder. Other insect species, such as the monarch butterfly, also have experienced sharp declines. 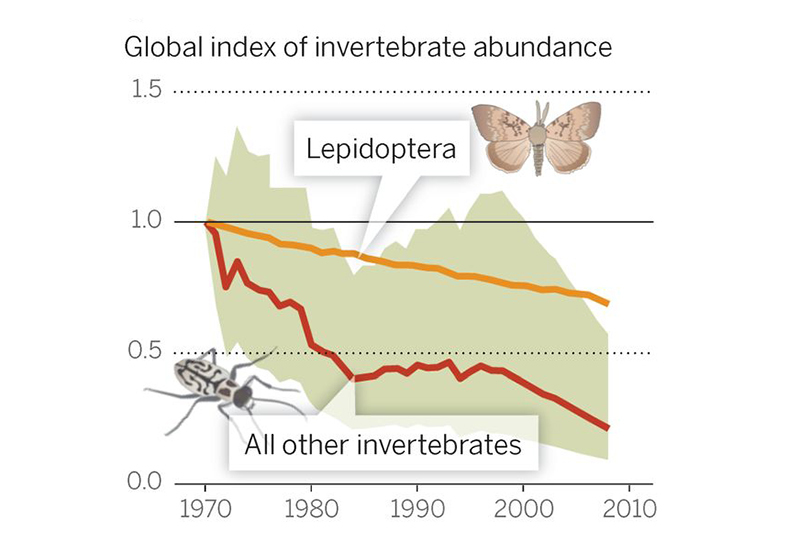 The Guardian Oct 2017 report on the German study.

A report on ScienceMag.org in May 2017 commenting on “Where are all the insects gone?”

This photographer reported dramatic decline in his experience in US.

This year entomologists in Australia have raised concerns of a dramatic drop in insect numbers in many parts of Australia including Sydney.

The Australian published concerns last week and published this quote:

“Dave Goulson, professor of biology at Sussex University, says: “Insects make up about two-thirds of all life on Earth but there’s been some kind of horrific decline… We appear to be making vast tracts of land inhospitable to most forms of life, and are currently on course for ecological Armageddon. If we lose the insects, then everything is going to collapse.”

Perhaps the end of the world won’t be marked by a bang, but by silence. A long exhalation. A slide into quiet.”

Listen to a podcast on ABC radio here, broadcast this week!

Hell no, how awesome would it be to enjoy outdoor summer activities without those annoying pests!

Of course we don’t need to worry, we still have Facebook, cosmetics, selfie-sticks and there is always new exciting tech things to come out such as those google home things that can automatically control your house and take your insect screens down because you won’t be needing them anymore.

And thankfully, now the insect diet option is out, most of us would be happy not having to fry crickets and grass hoppers for a feed. Remember, insects were meant to be our saving grace to provide our main source of protein in the next 50 years as the human population reaches its peak and food supplies, in particular, protein supplies, become increasingly scarce and unable to feed the multitudes.

Seriously though, humans need biodiversity and a food chain.

Insects are a key part of our ecology:

But surely it is just a temporary blip in numbers and all will be well?

This all depends upon the causes but the charts from the Germans seem to suggest a long trend down towards extinction a persistent 75% decline over a quarter of a century is no laughing matter!

What has caused the insect decline?

Most flying insects have very short adult flying life spans – often only a week or two, or even shorter, although female mosquitoes live around two months – their numbers are thus totally dependent upon their ability to reproduce – perhaps this is a clue as to why it seems the bull ants are not affected (yet) – they have a much longer life span of around 1 to 2 years.

Entomologists have yet to pinpoint one specific cause but it seems a number of possibilities exist:

2. Changing climatic and seasonal patterns which disrupt their life cycle

3. Fly swats – only kidding these are NOT the cause – who owns these nowadays anyway?

4. Insect infections such as viruses

and the future? what future?

And, in the words of the Moody Blues …. To Our Children’s Children, Children …… I am sorry, we may have failed you in more ways than just vertebrate extinctions (oh yes, this week the last male white rhino died – unless that was fake news – but I haven’t seen any of those around here so maybe its real), global pollution, resource exhaustion, inter-generational debt, climate change, a return to the pre-antibiotic era of no chemotherapy, no transplants and much reduced surgical options, perhaps nuclear war, and perhaps now have contributed to a critical extinction process of the insect world.

Luckily we were not made in the image of Aries or Satan – because then the creatures of the earth would be in real trouble!

We almost created this scenario back in the 1950’s with DDT, prompting Rachel Carson to write her famous provocative book The Silent Spring which helped cease usage of the lethal toxin – but it seems we have not thought things through very well and our Seven Deadly Sins as led us to our future – you reap what you sow – and perhaps soon there will be no point even sowing because there may not be any seeds produced.

Insects evolved over 450 million years ago during the Devonian period when forests started to spread across the earth, and they have survived every major extinction event since then – but they perhaps have met their match with humanity, although as a group, they are diverse enough to survive even our mismanagement. It is likely, that as the earth becomes inhospitable to most life forms, new extremely hardy, insecticide and radiation resistant life forms will evolve to replace them.

Biology 101 on species population growth cycles does predict global human population will soon peak and then start to die off from around 2040 or so when resources start to become scarce, particularly in the severely over-populated regions. But will this “adjustment” to the human footprint come too late to save planet Earth from ending up like Mars but with radioactive, toxic oceans?

Could there be a common explanation for why human fertility has fallen as well? A controversial French study suggested male fertility is apparently falling by 2% per annum and sperm quality has fallen by 50% in just 18 years from 1977 to 1995 . A meta-analysis of 61 papers published in the BMJ in 1992 suggested that sperm counts had fallen by half in the preceding 50 years. In another French study, sperm counts fell by 32% between 1989 and 2005 while the proportion of properly formed sperm fell from 61% to 53%. See The Economist report.

Time to forget reality TV and GET REAL!

Hopefully nature will fight back – but it will need our help! 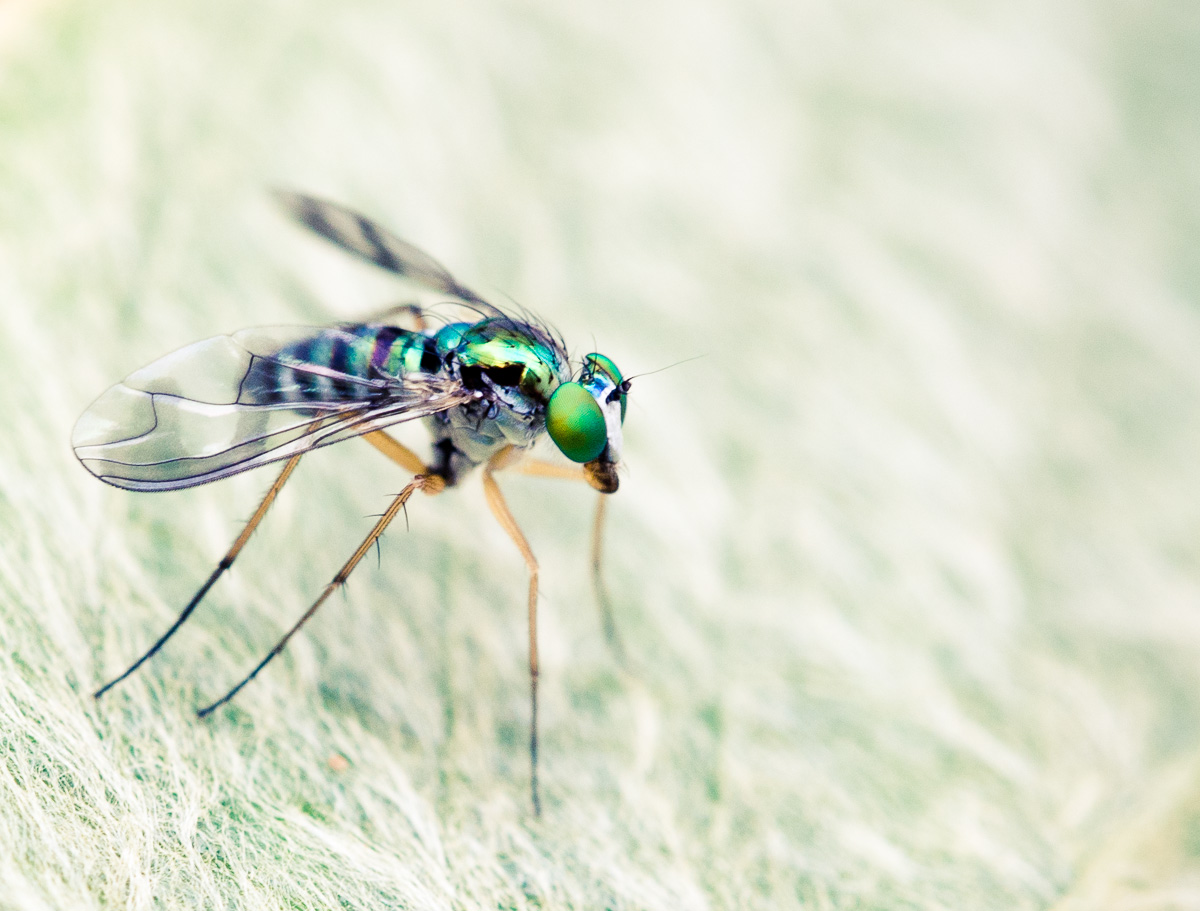 This dainty little metallic blue and green Australian fly is the long legged fly (Austrosciapus connexus) – which is mainly found along the east coast of Australia, Adelaide and Perth but not in southern Victoria or Tasmania. I took this shot in the Sydney Botanical Gardens hand held with Olympus mZD 60mm f/2.8 macro lens.