The most popular gorge in Crete to hike down is the Samaria Gorge which is a very testing down-hill hike dropping some 1250m in elevation and giving one’s knees a real work out, and to get to the gorge you really need to go via a tour bus as there is no easy way to get back to a rental car as one usually takes a ferry from the port at the end of the hike.

Unfortunately for me, or perhaps fortunately for my knees, the gorge was closed the week I arrived (it is closed from 31st Oct through to end of April), and I decided to look for another gorge, and the 2nd most favorite gorge in Crete is the much easier and shorter Agia Irini Gorge (Φαράγγι Αγίας Ειρήνης).

Although not as dramatic, the Agia Irini Gorge has some advantages over the Samaria Gorge:

During the Ottoman era, rebels had their dens at the location of “Polla Spitakia” and in 1866, 1,000 women and children escaped from the Ottomans through this gorge!

Getting to the gorge

It is a much easier gorge to access as you can take your rental car and drive 1hr or so from Chania and park at the cafe at the northern (highest end).

Of course, if you are a fitness fanatic or crazy, or you want to prepare for the Samaria Gorge, you could park at the bottom and walk UP the gorge and then walk back down it to your car.

For those leaving their car at the northern end, once you have completed the thirsty 3.5hr walk and had a meal in the little tavern, the Taverna Oasis, at the southern end, the tavern owners will call a taxi to take you back on a 25min drive back to your car for around 35 euro (best find some fellow walkers to share the costs!).

You might elect to get a taxi or a 1.5-2hr 7km walk along the road in the hot sun to Sougia where you could stay the night (there is a 7am bus Mon-Sat) or catch the 1230hrs or 1815hrs bus back to the gorge entrance or to Chania.

As in many such places in Greece, remember to bring some small change – it will cost 2 Euro per person and this goes towards the upkeep of the gorge.

A few safety issues to consider

I would avoid walking the gorge if there have been rains over the previous few days or rain is forecast on the day of the walk – the one small area where there was moisture on the boulders, they were extremely slippery and even with care resulted in slips – not great for your camera gear when it crashes onto boulders (or falling on your head or twisting your ankle)! And a lot of water in the narrow gorge would make it extremely dangerous.

The gorge is a fairly remote environment with limited mobile phone access, so take due care, especially if you are going solo and late in the day when there may not be any more walkers to assist you if you do injure your ankle or worse.

While no where near as onerous a walk as the Samaria Gorge, it is still quite a rough walk on loose stones and rocks with around 500m descent over 7.5km and so you should really wear good hiking boots to cope with the rocks (although you can get by with good runners but your feet will not thank you).

If you have a dodgy knee, then consider taking hiking poles for all those steps down, and especially if you are considering doing the return hike, although it is no where near as tough on your knees as the very steep 2km initial section of the Samaria Gorge (they even apparently have donkeys on hand to cart you at Samaria as many run into problems!).

Thankfully, unlike Australia, there are NO venomous snakes that kill you as Hercules allegedly eradicated these from Crete!

Avoid the need to rush the walk by ensuring you start early enough to avoid night fall and missing the tavern being open and taxi or bus access for the return to your car – at the end of daylight savings on Oct 28th, the sun sets around 5.30pm, and the bus leaves Sougia around 6.15pm (it is a 1.5-2hr further walk down to Sougia and the bus takes about 45min to get you back to your car at the southern entrance of the gorge).

It is unlikely you will get lost in the daylight as the gorge is very well marked with red paint on boulders, and, for the most part, a clear path, often with wooden fence rails, and each kilometer segment has a marking pole and most have toilets and possibly potable water (personally, I would bring a bottle of water).

In summer, wear a hat and sunscreen and perhaps take a 2nd bottle of water.

Don’t be stupid and try dangerous selfie shots on the edge of the cliffs.

What camera kit did I take?

The smallest, lightest, most versatile, sharpest, weathersealed kit available as the gorge is very challenging to photograph with its extremely steep and tall cliffs along with a very high contrast on a sunny day.

I took the Olympus OM-D E-M1 Mark II with the holy trinity of zooms – Olympus 7-14mm f/2.8, Olympus 12-40mm f/2.8 and the Olympus 40-150mm f/2.8 and I used nearly every focal length this range afforded me as well as hand held HDR bracketing and in the dark depths of the gorge, I had to resort to some rather long hand held exposures – thankfully, the E-M1 addressed both of these issues without me needing to take along a tripod.

I would NOT have been able to achieve the above versatility and image quality in the same weight had I used my full frame kit (these I left back home in Australia as Micro Four Thirds is currently so much more suited to travel than any current full frame system – particularly when I love to shoot at 300mm equivalent focal lengths).

Would anyone have noticed or cared whether or not I carried twice as much gear and took the photos with a full frame camera instead?

Here are some pics of the gorge

It was at the end of October so some fall foliage was appearing and I really wanted to capture the lovely yellow foliage backlit by the sun as much as possible.

These are displayed in the order in which they were taken to help you get a better sense of the gorge.

The walk was a lovely, peaceful walk with only a dozen or so other walkers to break the peace. The air had a scent of sage, while pines, plane trees and cypresses provided some shade from the early afternoon sun. If you are after the wild flowers, they are apparently best in Spring before May. 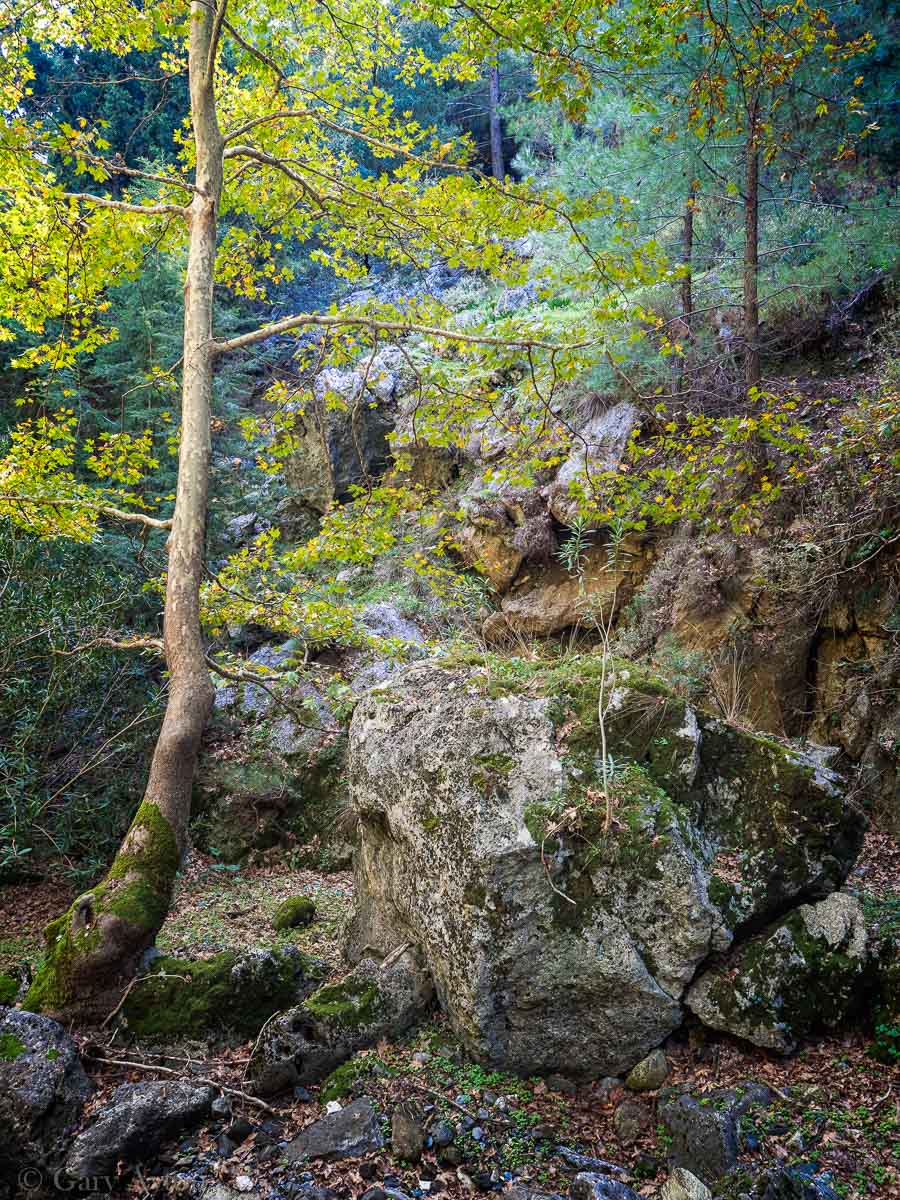 The gorge meets with another small gorge, the “Fygou Gorge”, which was the escape exit for the rebels from the gorge to the area of Omalos. An unexpected orthodox Christian shrine half way down the gorge. 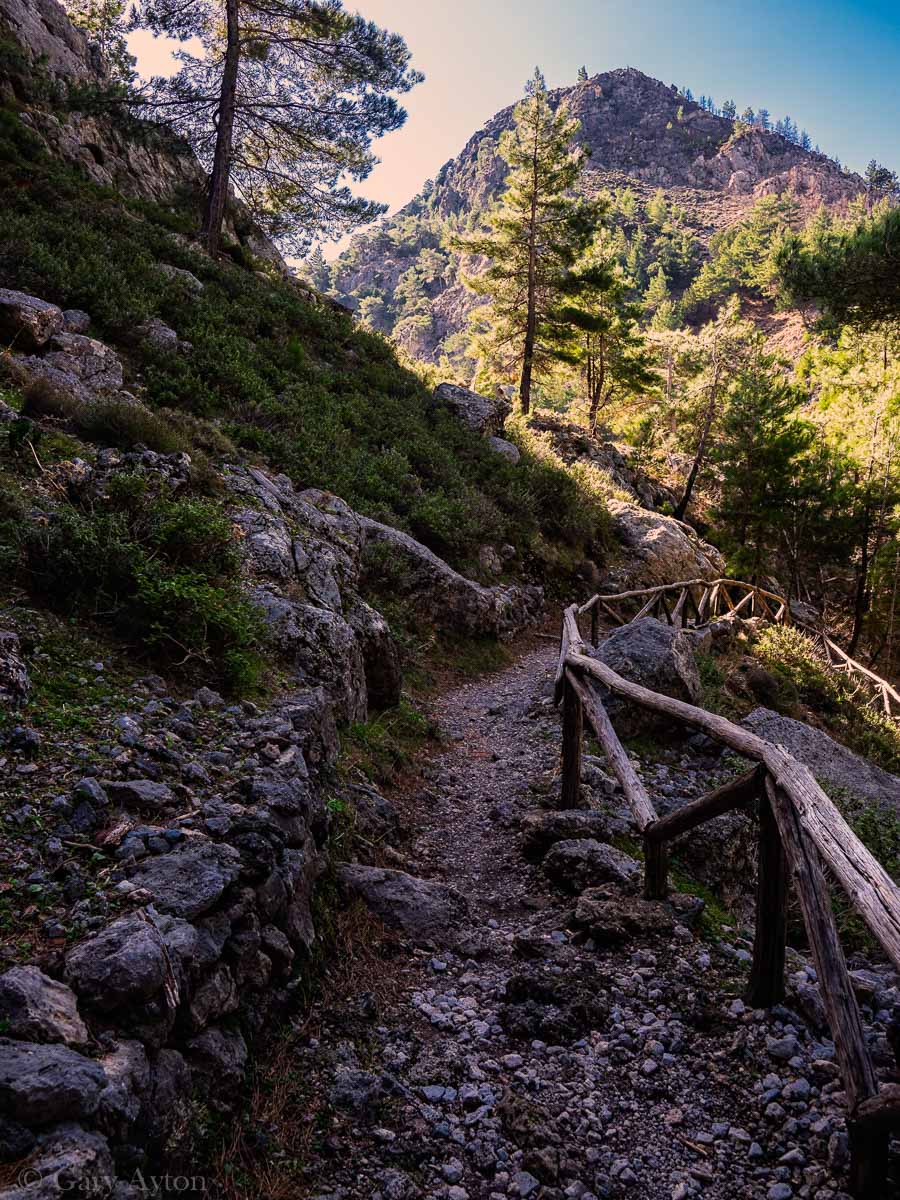 A supply room built into the cliff face: Perhaps remnants of the mythological beasts landing on the edge of a distant cliff, nevertheless a good reason to have the 300mm telephoto lens – the tall pine tree gives some scale to the image: And a HDR from 3 bracketed exposures hand held: The tree is alive with hands – another HDR image! 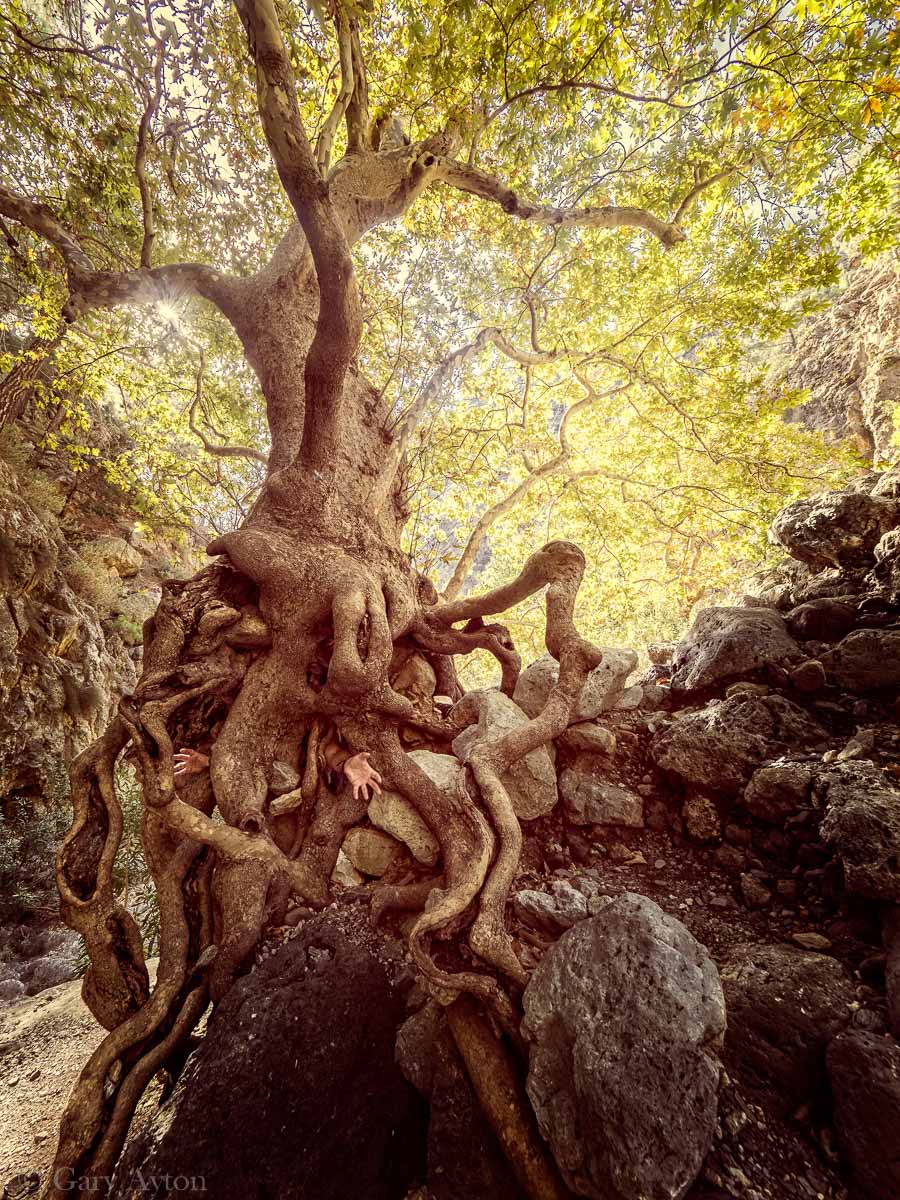 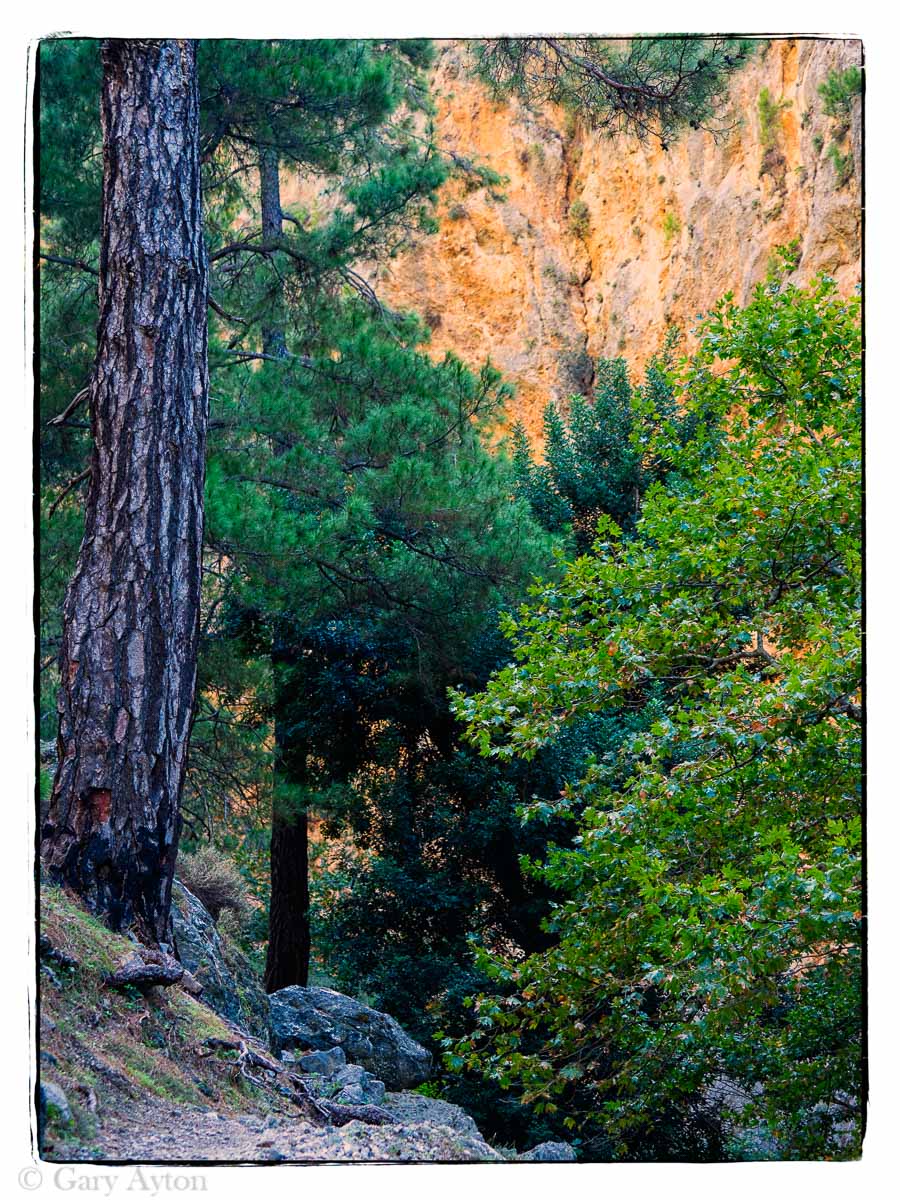 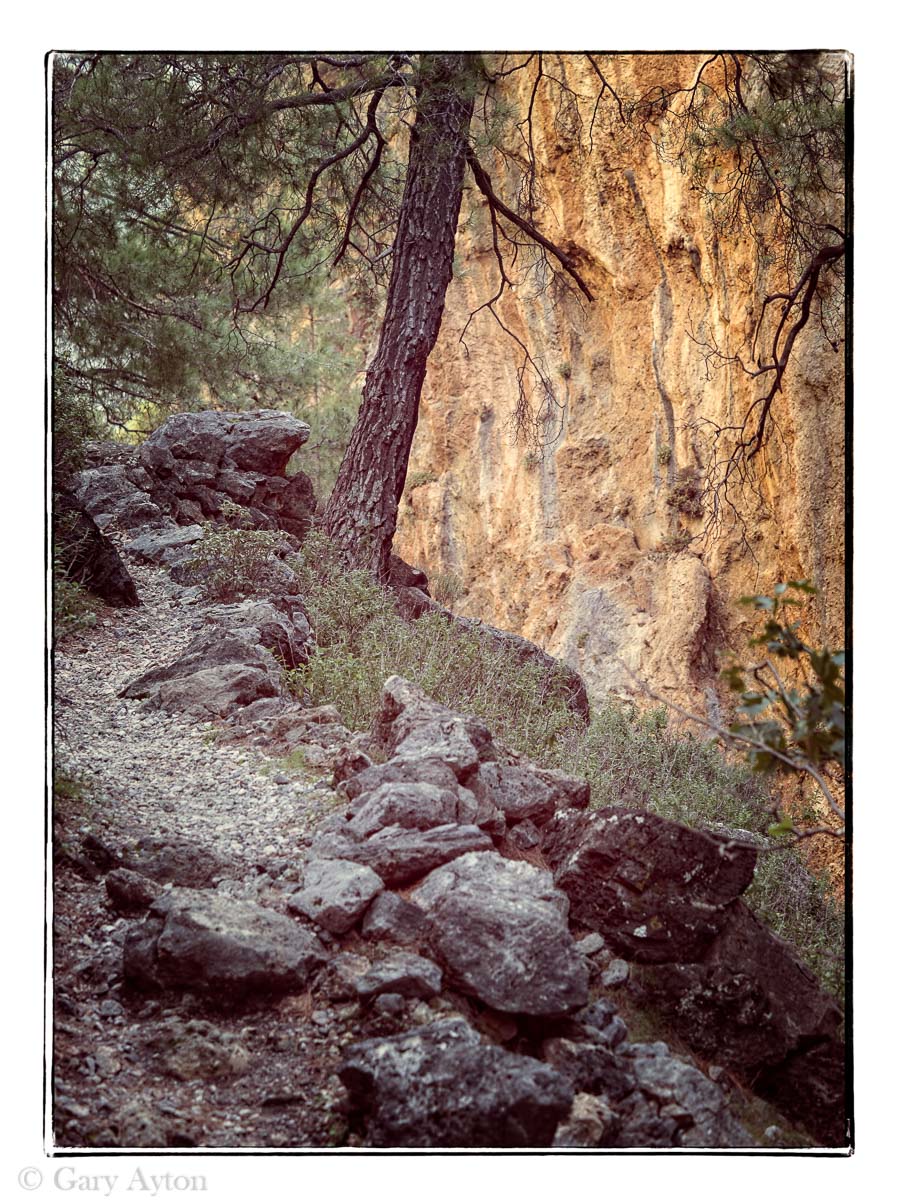 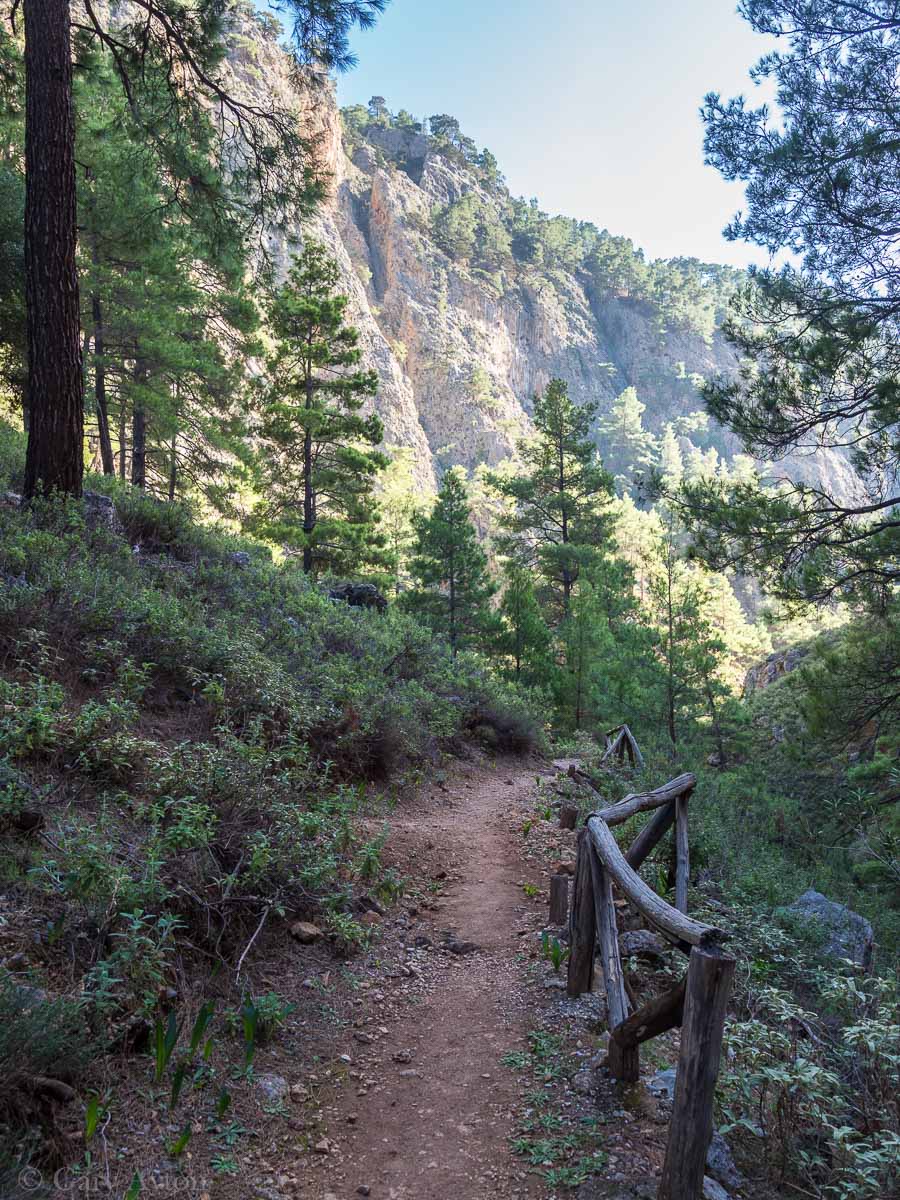 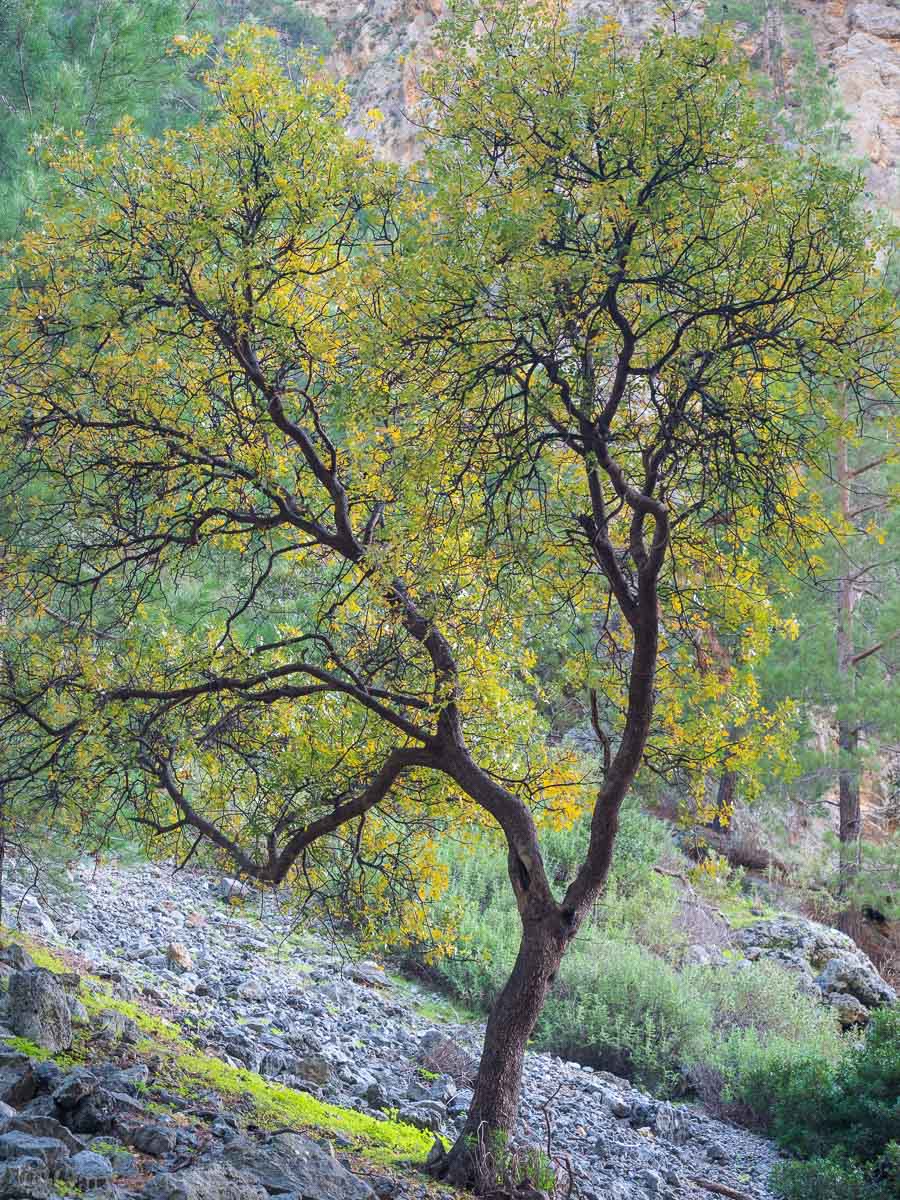 I hope you enjoyed my little tour through this lovely gorge, albeit without any water in the stream, but at least it will either inspire you to take a trip there and enjoy the ambience, or, allow you to be like most tourists and speed walk through the gorge in half the time and not notice it’s beauty and ambience.

I just don’t get why so many people go to all the trouble to travel to a part of the world they have never been to and then rush through the journey part so they can get to the boring end, but I guess each has their own priorities in life, and if stopping to sniff the roses is not one of them, who am I to judge?

In retrospect, I would have preferred to have had an earlier start to the day and had time to go to the apparently cute seaside village of Sougia with its small pebble beach and the nearby ancient site of Lippos which is the location of a temple of Asclepius, who was a healer of the ancient Greek world. Healers built the famous healing sanctuary of Asclepius in Kos and the sanctuary at Epidaurus. It is also possible to catch a ferry from Sougia to the other southern coast beaches such as Paleochora.