Santorini where even a novice can come away with beautiful photos

Santorini is one of those amazing places rich in aesthetic beauty where almost anyone can take a great photo.

This extremely popular tourist Greek island is somewhat sheltered from the economics of mainland Greece because of the tourism it generates, however, be warned, at the end of Daylight Saving (end of October), the “tourist season” ends and much of the shops, restaurants, hotels, ferries and many of the flights STOP until next tourist season starts in May.

I found this out the hard way having purchased Golden Star ferry tickets from Santorini to Crete online through Direct Ferries several months earlier, and despite receiving an email 2 weeks prior to the ferry trip advising to download and print out the boarding pass, when I took the taxi to the port on the Saturday night (the night before Daylight Savings ended), I was greeted with an empty port and no ferry – no responses from the ferry company which was not contactable, and eventually the online retailer, Direct Ferries was able to be contacted on an international call and the response was a vague, sometimes the Greek ferry companies don’t tell them when the change schedules or cancel ferries – but at least they refunded me my fare – little consolation for having to pay an extra night’s accommodation, lose a day of rental car use and then pay for flights to Athens then to Crete (there are no direct flights between the islands). I have still not had any explanations from either company.

The other main issue on the island is that the water supply is NOT potable as there are no running rivers or dams, and as I understand it, the water is pumped up from underground reserves but these are not drinkable.

But enough of the issues, Santorini is a place in which to relax, enjoy the Mediterranean sun and explore.

I used the Olympus OM-D E-M1 Mark II with the holy trinity of zooms – Olympus 7-14mm f/2.8, Olympus 12-40mm f/2.8 and the Olympus 40-150mm f/2.8 and I used nearly every focal length this range afforded me and some were shot using hand held HDR bracketing and in addition, I did get a brief chance to use my Olympus 8mm f/1.8 fisheye hoping to catch the last of the Milky Way core at dusk but alas there was too much light pollution.

I won’t post too many pics as there are millions of pics of Santorini online already.

The afternoon we arrived on a flight from Athens, a storm came through with torrential rain – apparently the first significant rains there in many months – and these were to stop flights landing until well into the evening with a number of flights turned back to Athens runway awaiting the weather to lift. I donned my wet weather hiking gear and my trusty rain proof OM-D camera with my favorite rain lens (thanks to its long lens hood which protects the front glass from rain drops) – the Olympus micro ZD 40-150mm f/2.8. 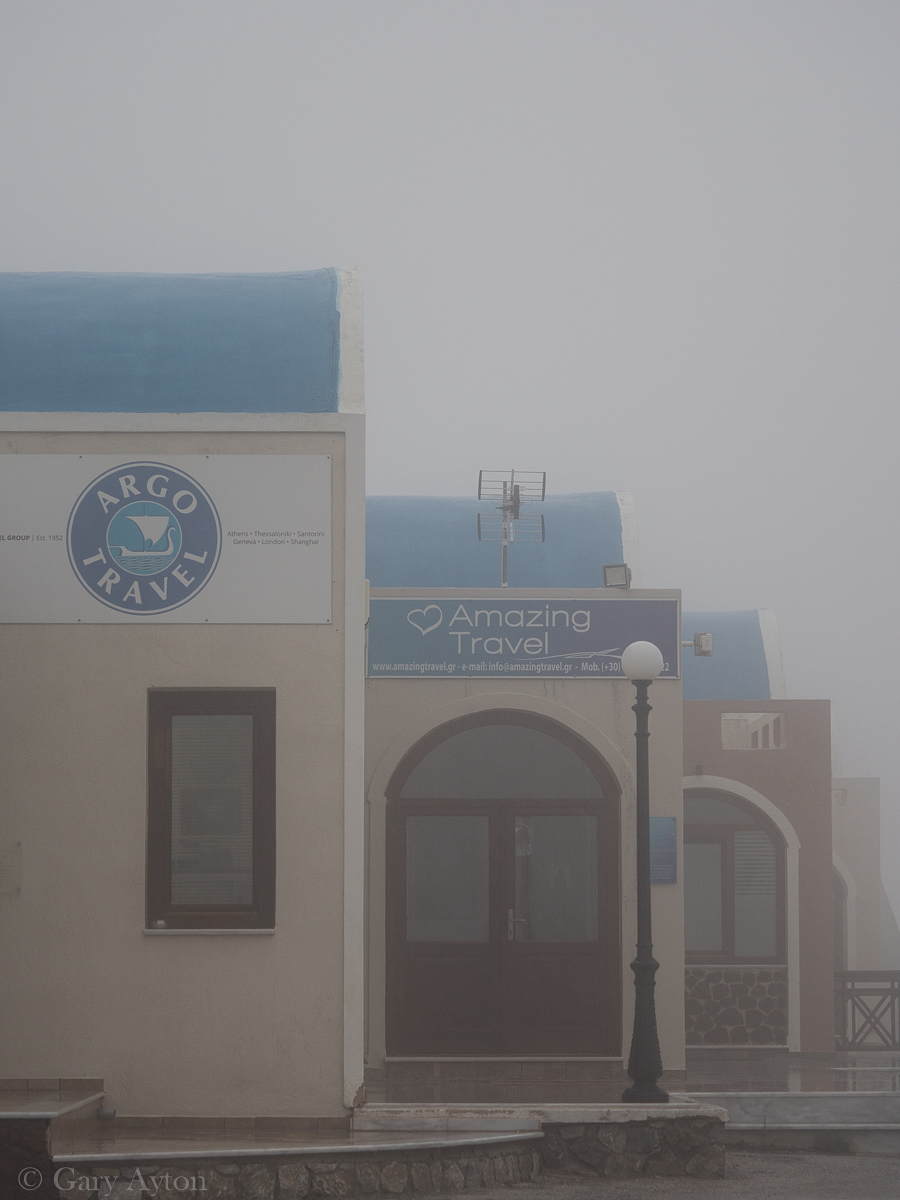 Our lovely De Sol resort was not looking that appealing for a swim! 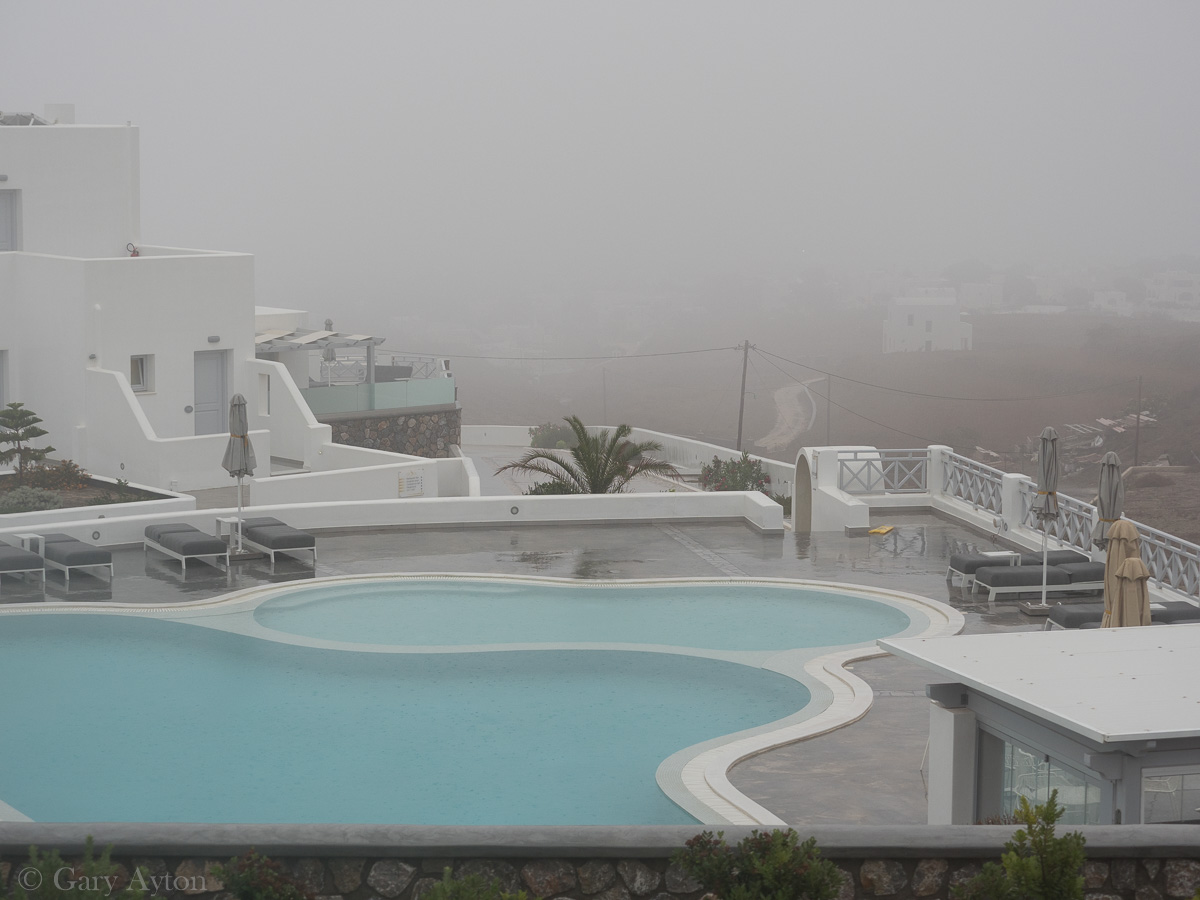 However, the next few days we were there, Santorini was back to its sunny self (these three were 3 shot HDR images showing the volcano from the aptly named Volcano View Hotel): 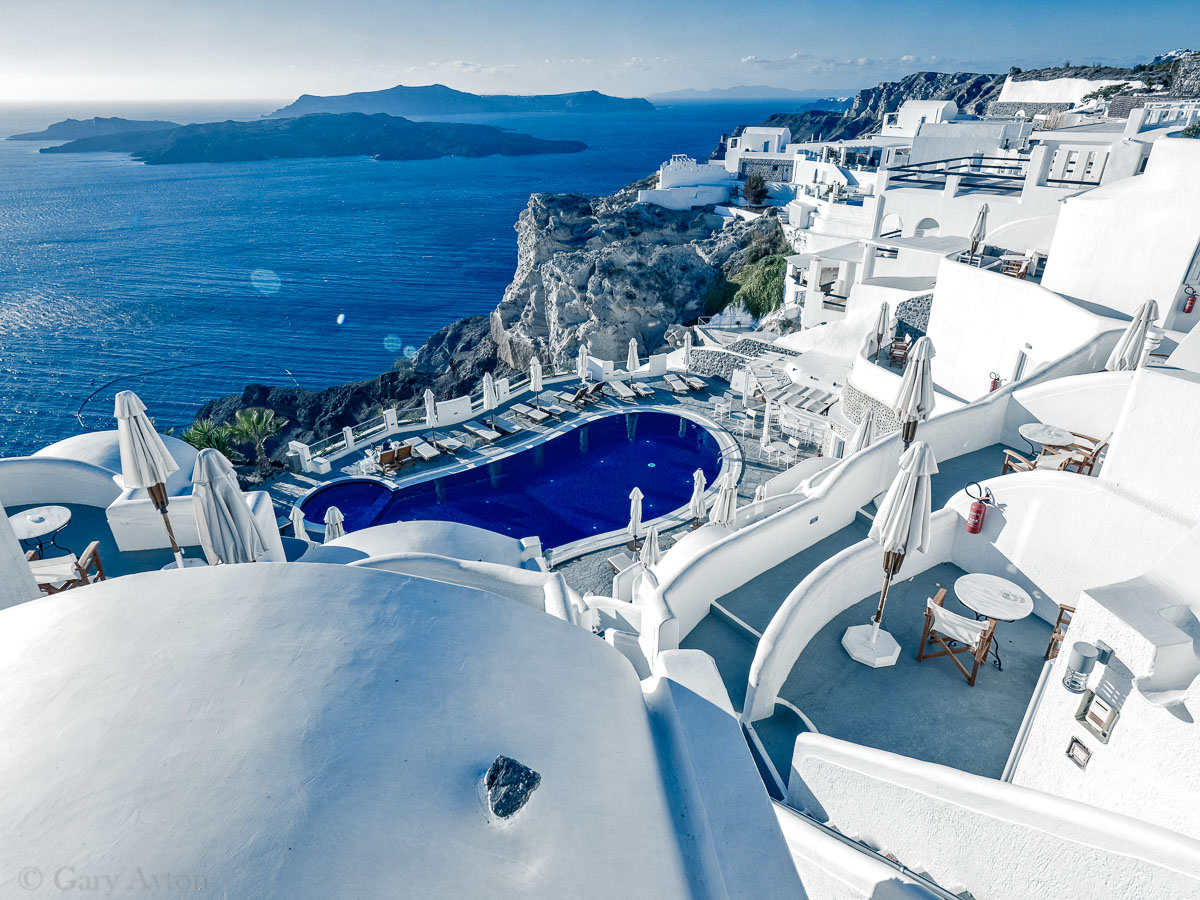 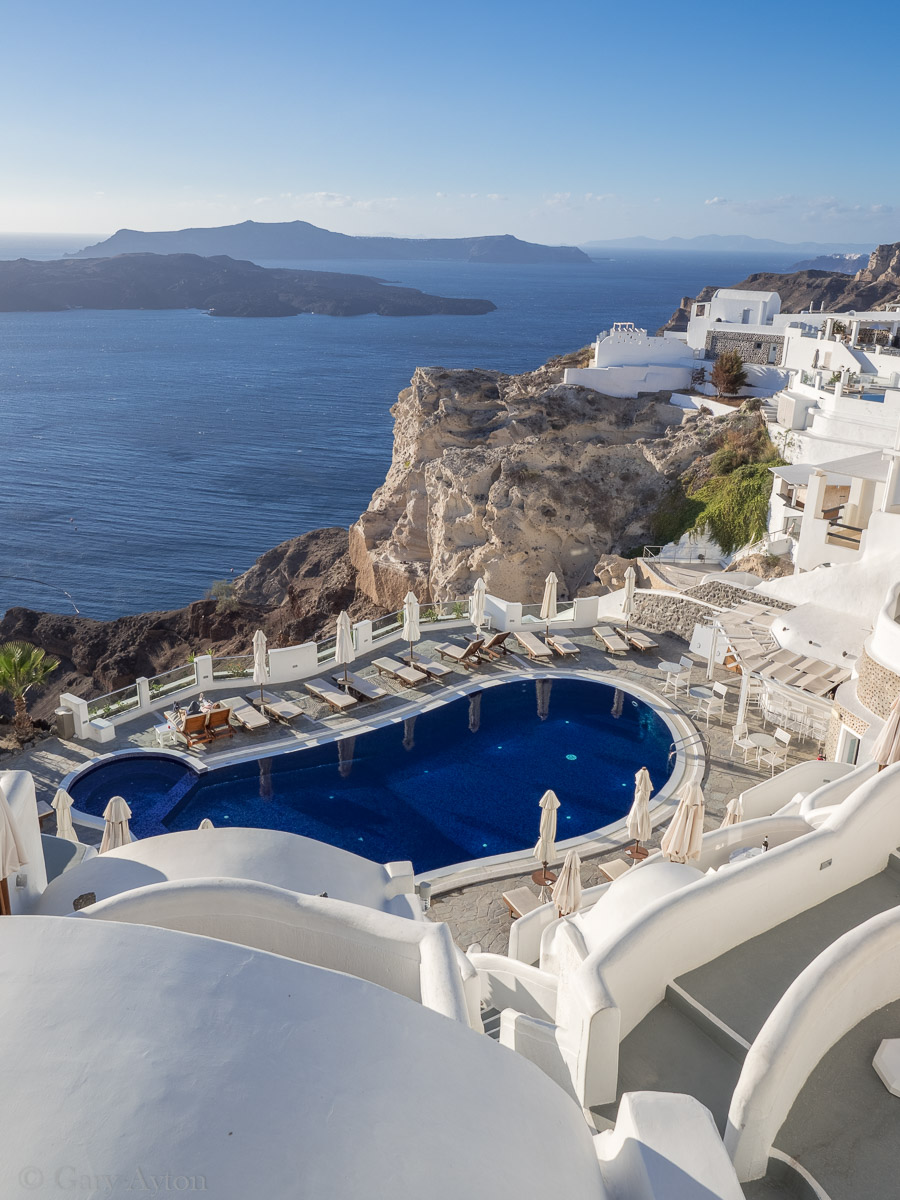 A Santorini blog would not be complete without a sunset pic or two! 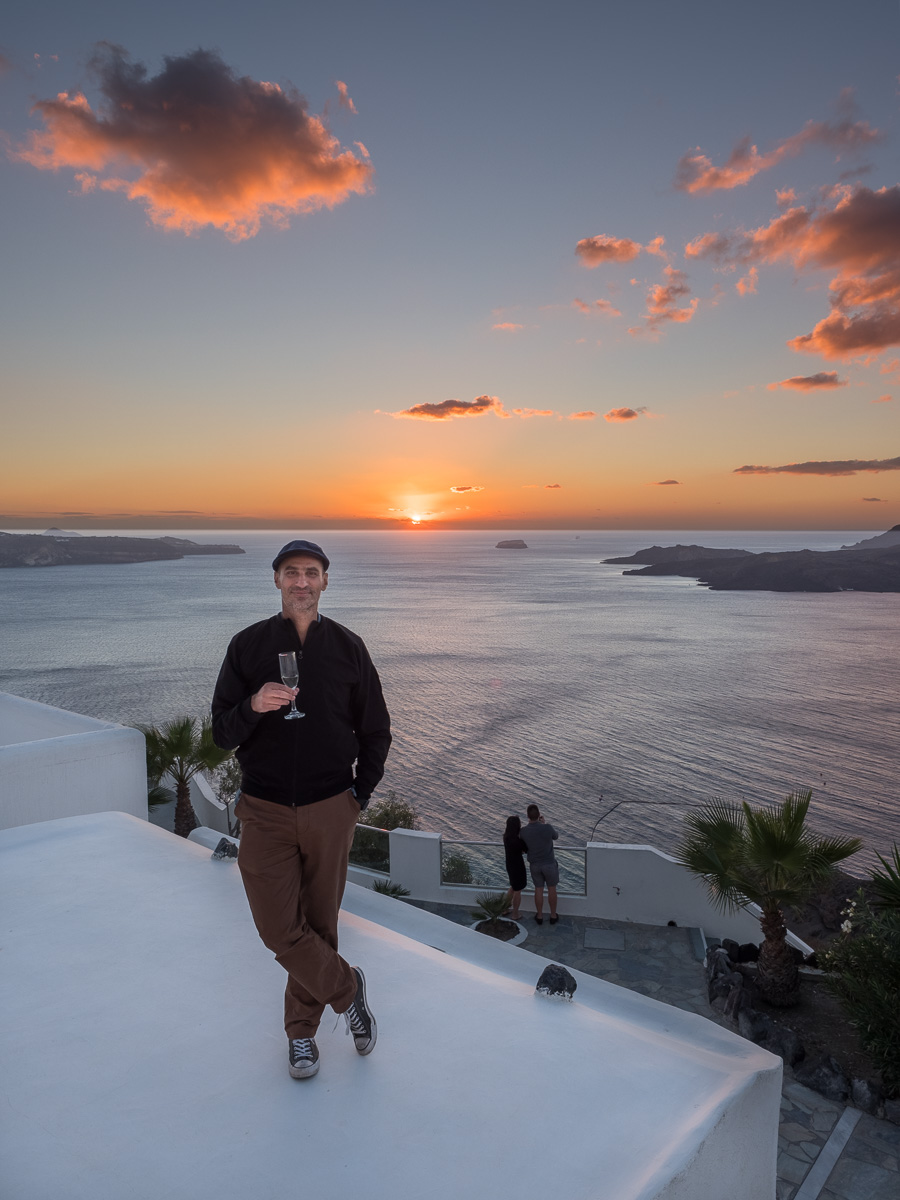 Dusk from the Volcano View Hotel using the fisheye lens: 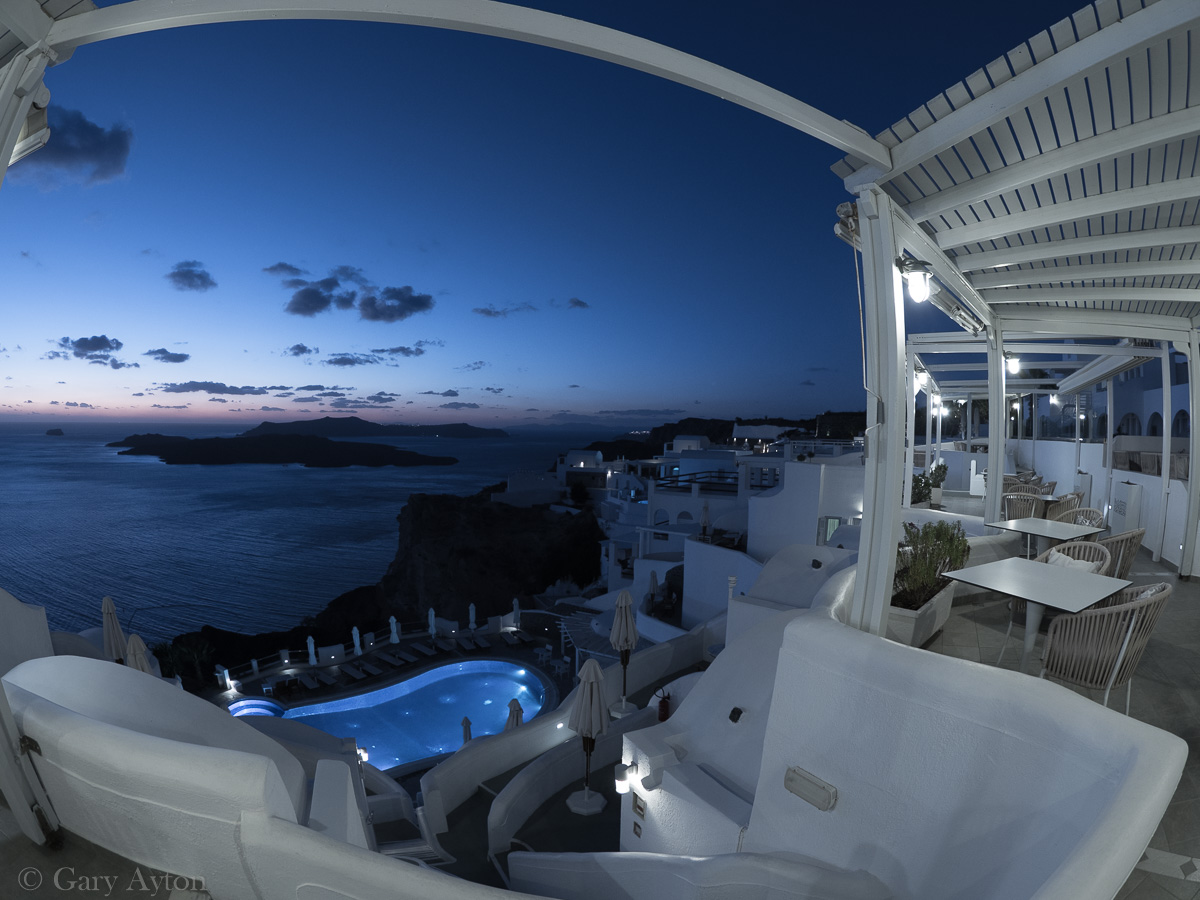 This was the last night the hotel was open for the season. 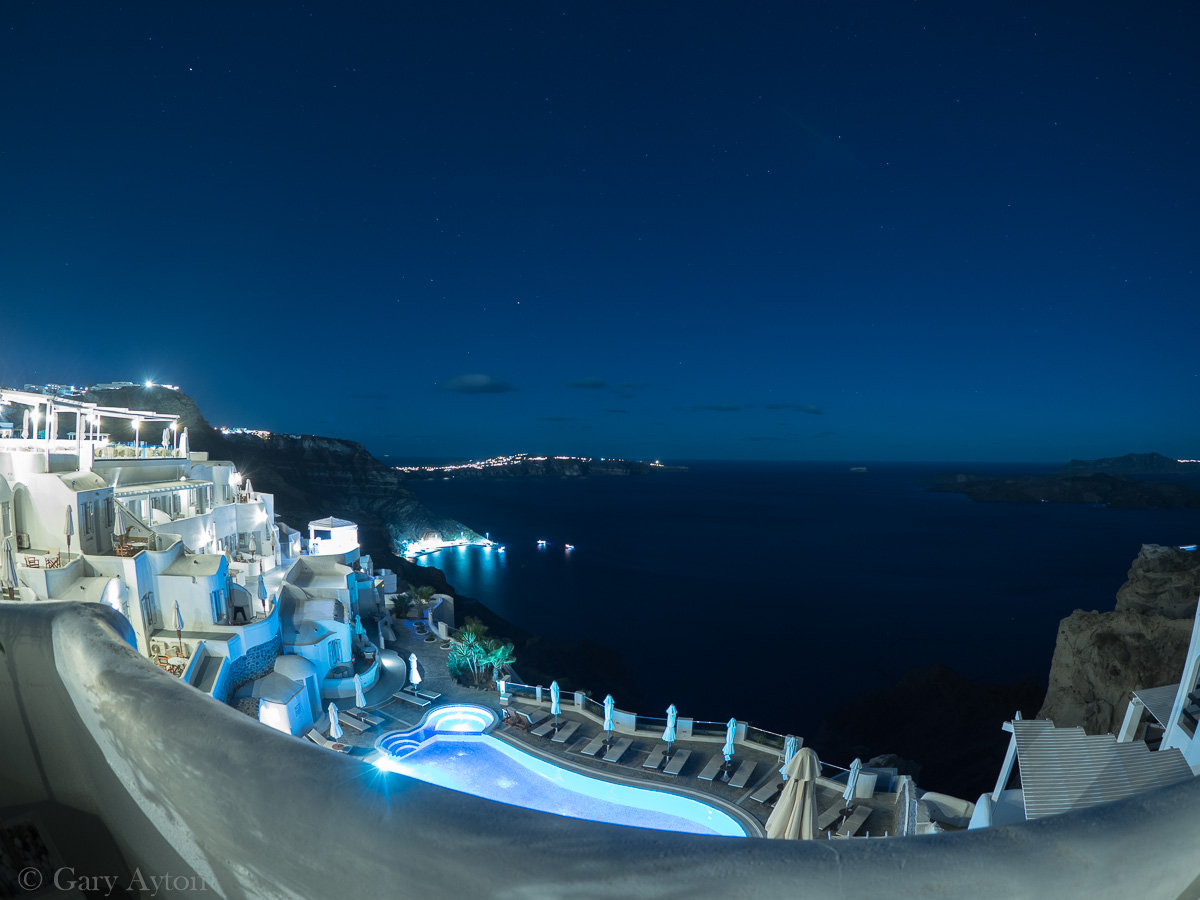 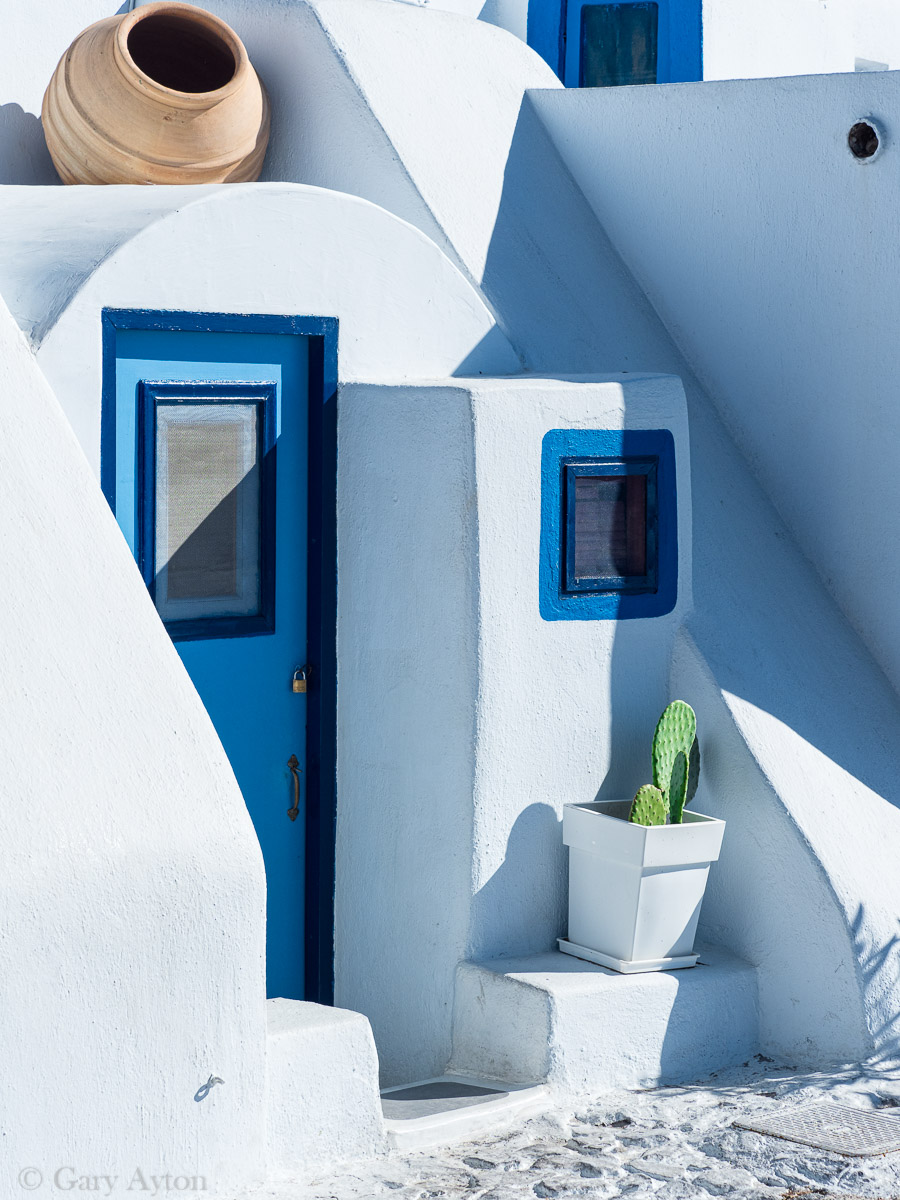 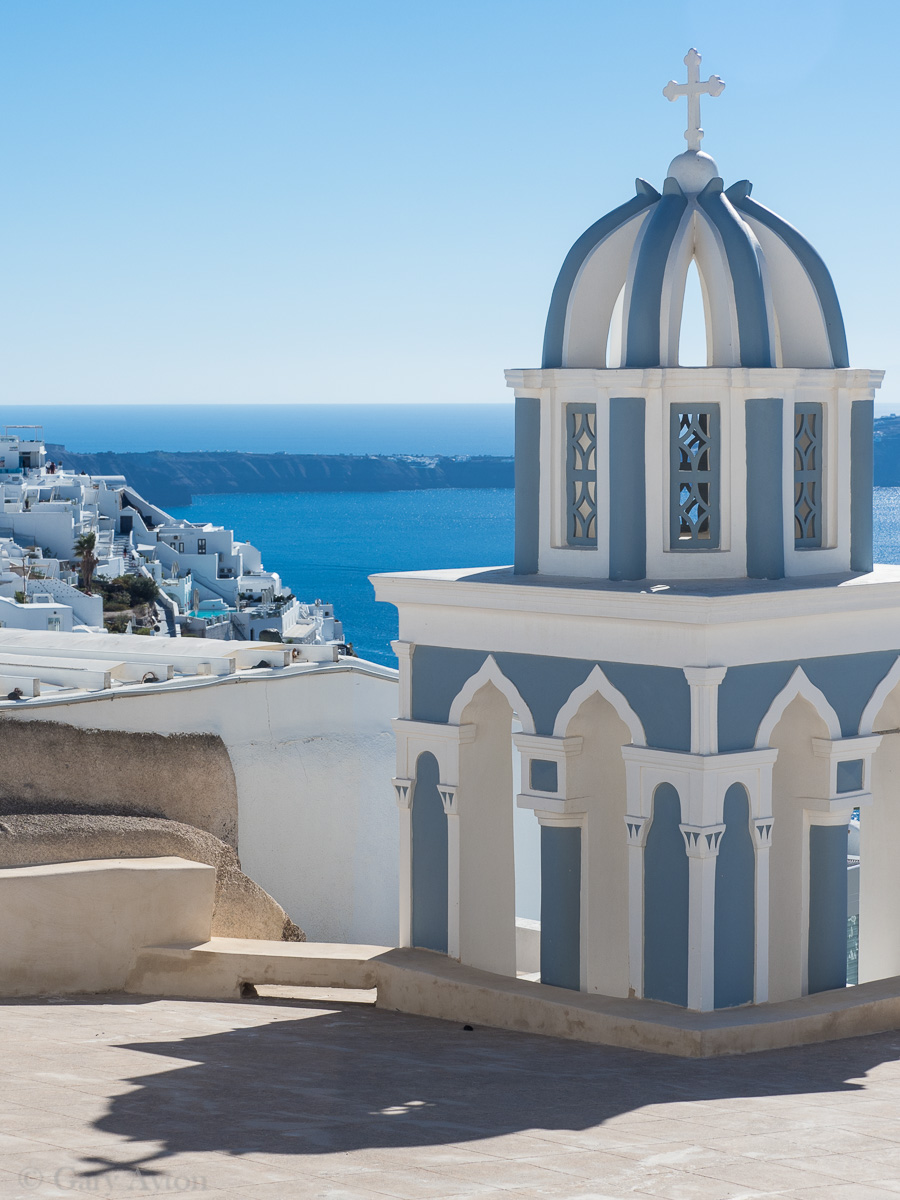 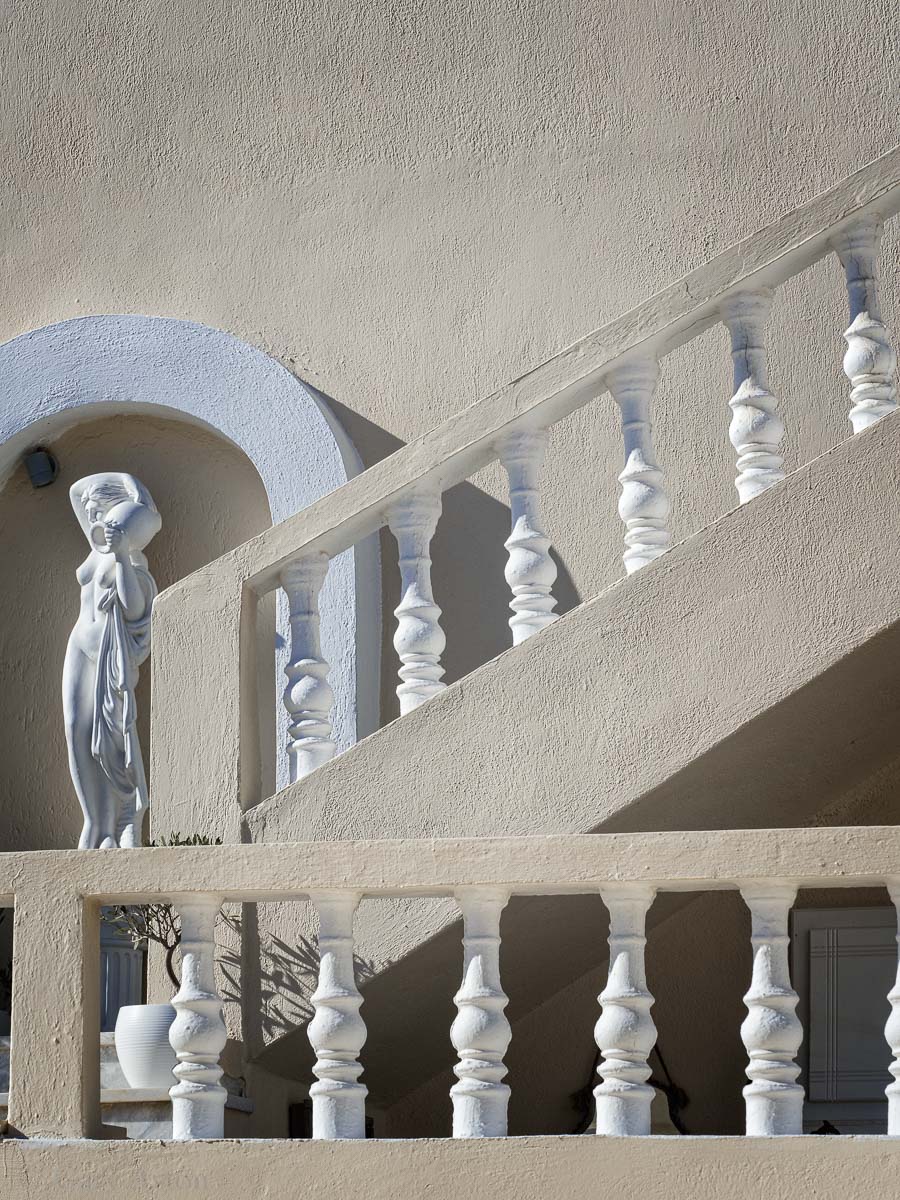 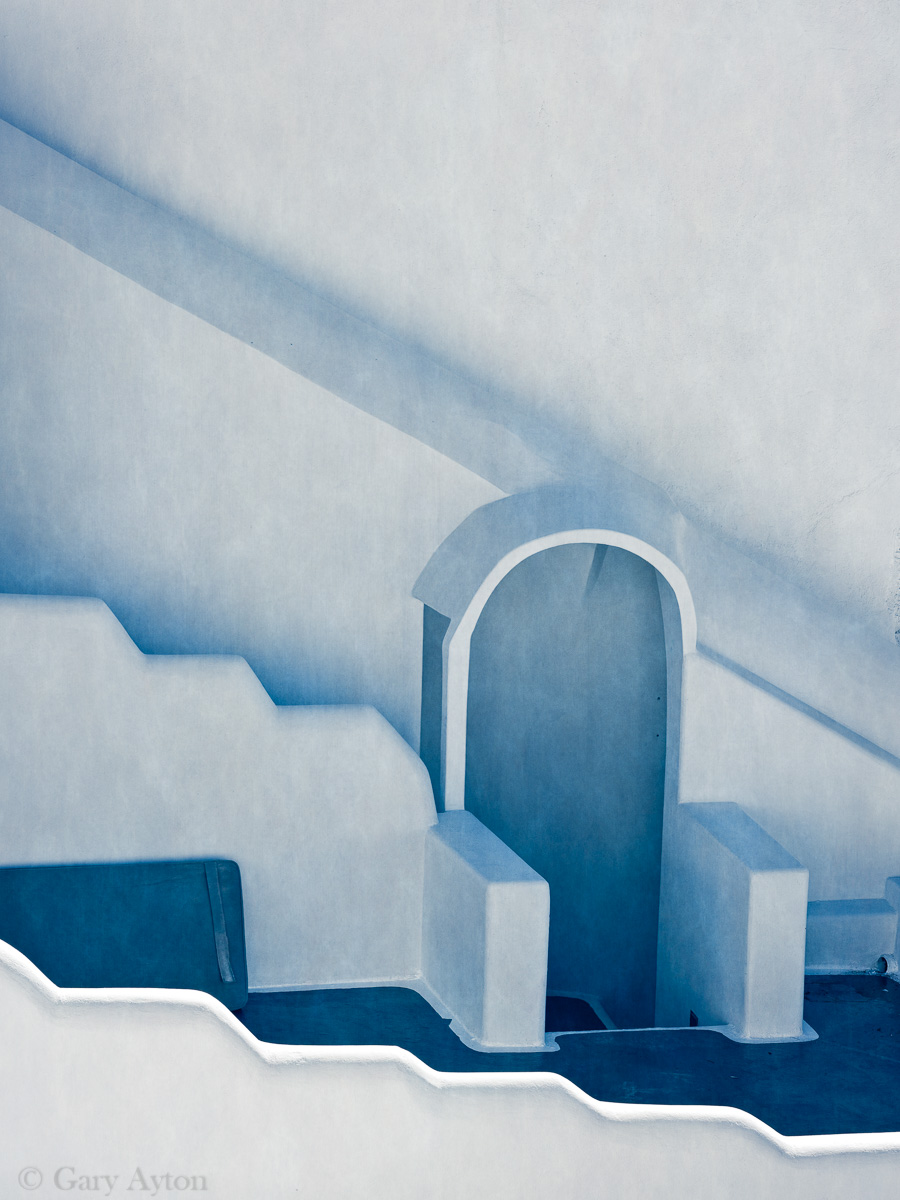 We booked a sunset restaurant in Oia which is a rebuilt town on the tip of the island some 10km away from Fira, so we decided to spend the afternoon walking there, and one of the first stops was Skaros:

In this image you can see Oia in the distance and this should have given us a warning that we may be time pressured to get there by sunset, but my colleagues decided to take a 45min or so side adventure and climb this little hill called Skaros Rock with its challenging vertical cliff faces as that seems the thing to do on these trips! Skaros Rock was a fortress from medieval times as it provided protection for the small fortified town of Skaros from the pirates. The first Duke of Naxos Marco Sanudo gave Santorini to the Venetian, Giacomo Barozzi in the year of 1207 who built the original castle, known as ‘Epano Kastro’ (Upper castle in Greek) or ‘La Roka’. At the top of the rock hung a large bell, to warn inhabitants of imminent pirate raids. The town was damaged a number of times by earthquakes associated with eruptions and the Venetian noble families that lived there decided to leave after the eruptions of 1707 to 1711. The rich Roman Catholics who had once lived there had moved to the town of Fira, abandoning the castle for a lower flatter level with access to the sea. By 1836, Skaros had been abandoned for many years. Now, Skaros Rock is totally uninhabited with the exception of a small church, the Chapel of Agios Ioannis Apokefalistheis, on its north side.

A sketch of how Skaros Rock was in the Venetian times: 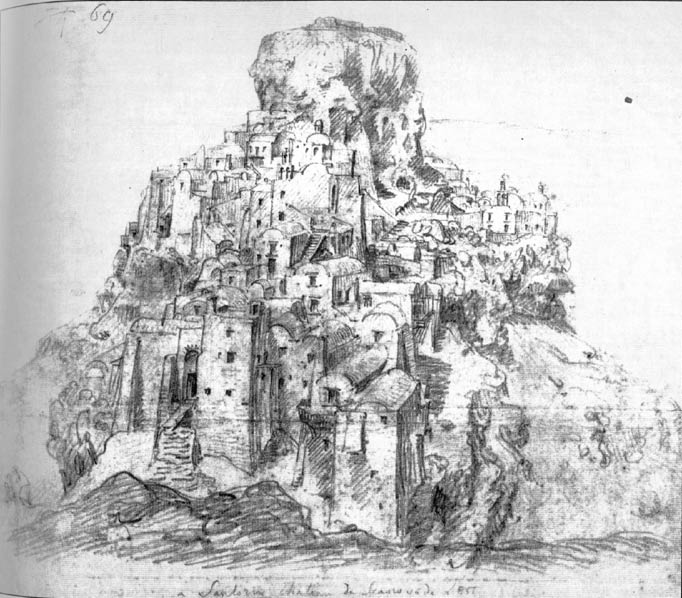 This small church below is on the south side of the rock: 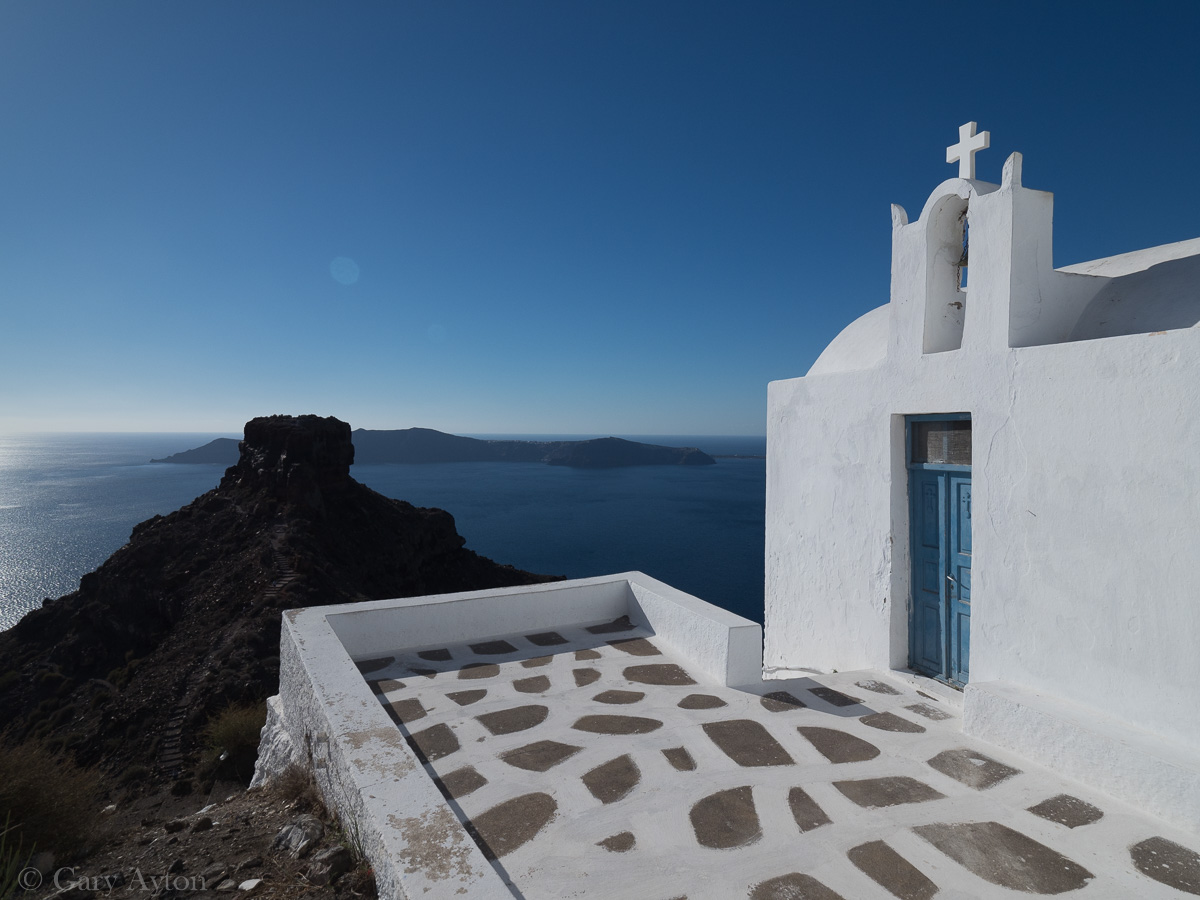 Yes, eventually they made it to the top! 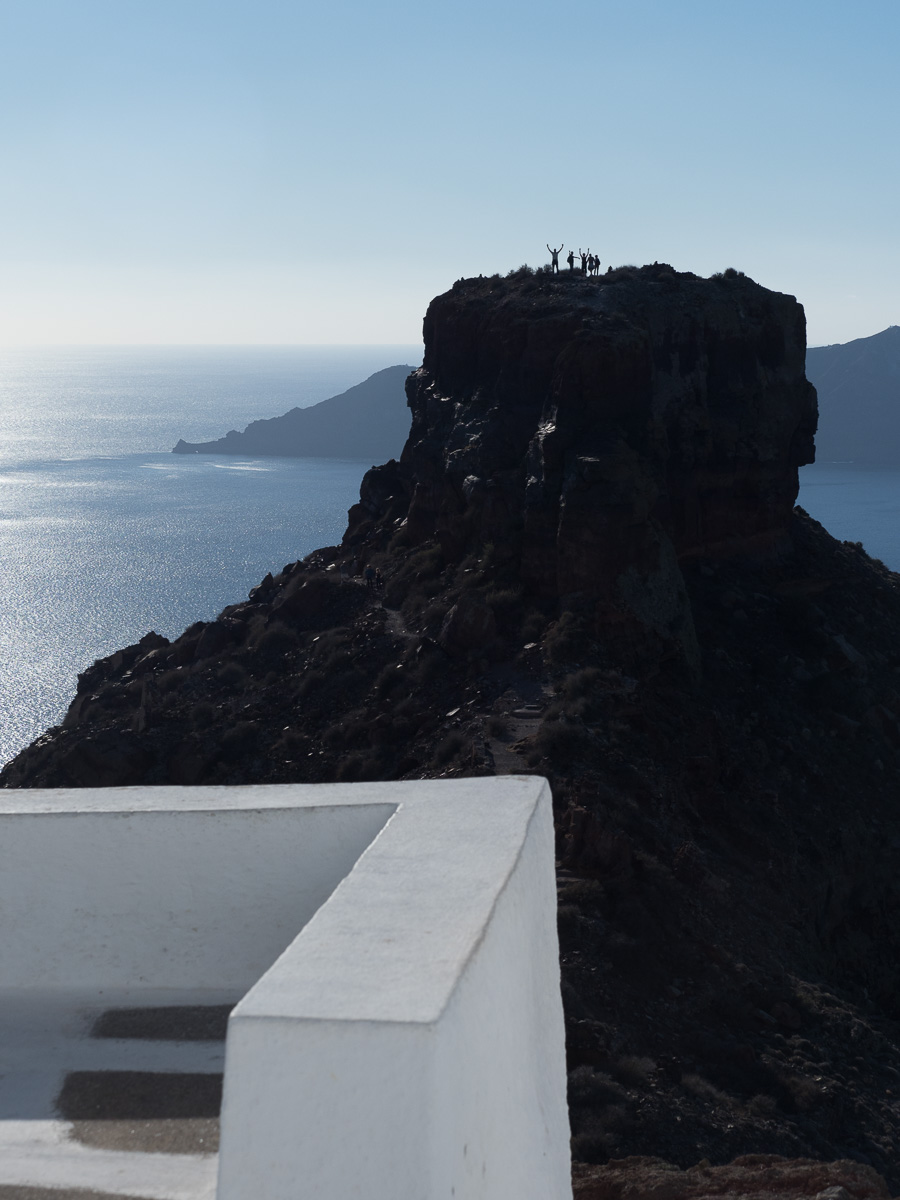 Back on our little afternoon hike to Oia, and it soon became evident that it would be challenging to get there by sunset and it became a mini Amazing Race as we risked our ankles running down the stony paths of the hills and then risking heart attacks climbing the next one as quickly as possible (thank goodness it was not mid-summer and hot!), and alas it was the end of the tourist season, the usual interval cafes for drinks were closed for the season: 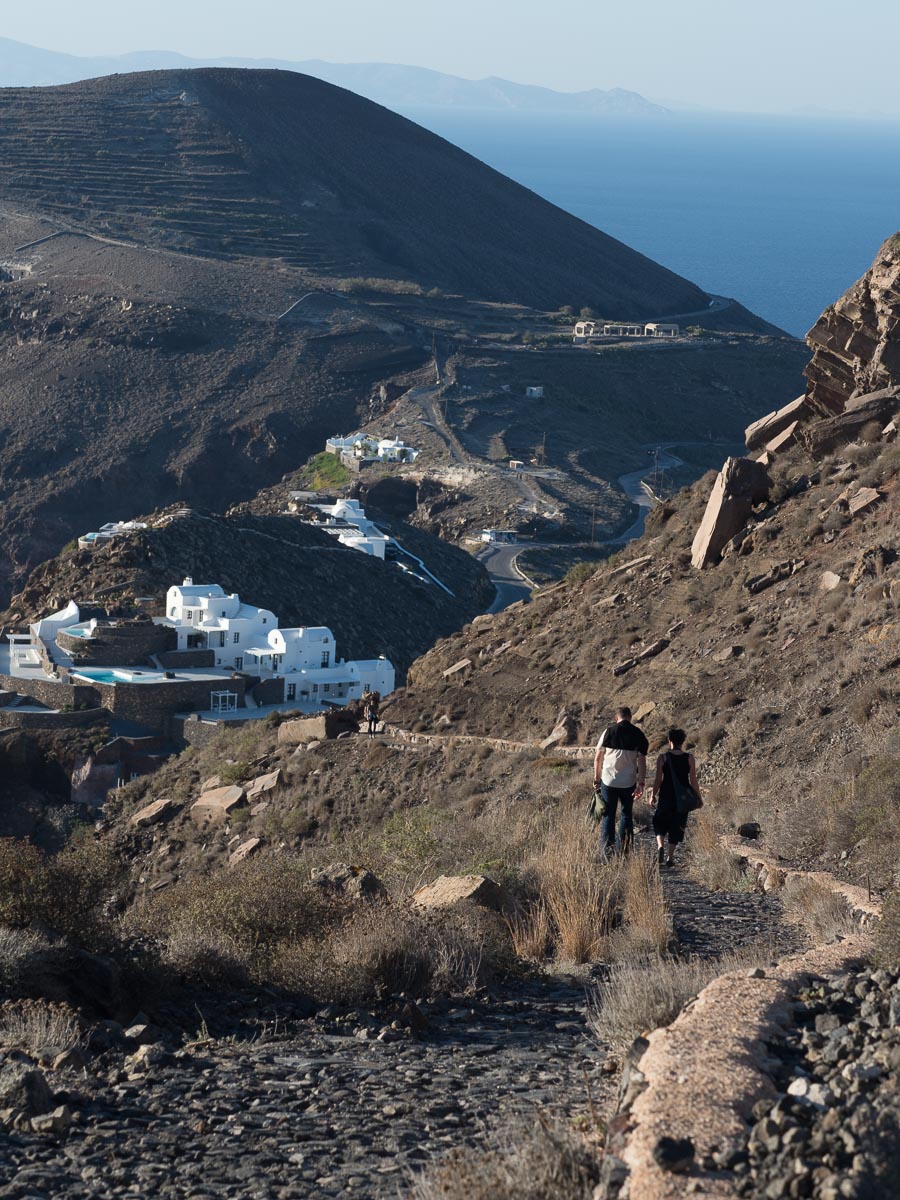 At the last hill there was a lovely church over-looking Oia, but it was still some distance to walk to our restaurant at the tip: 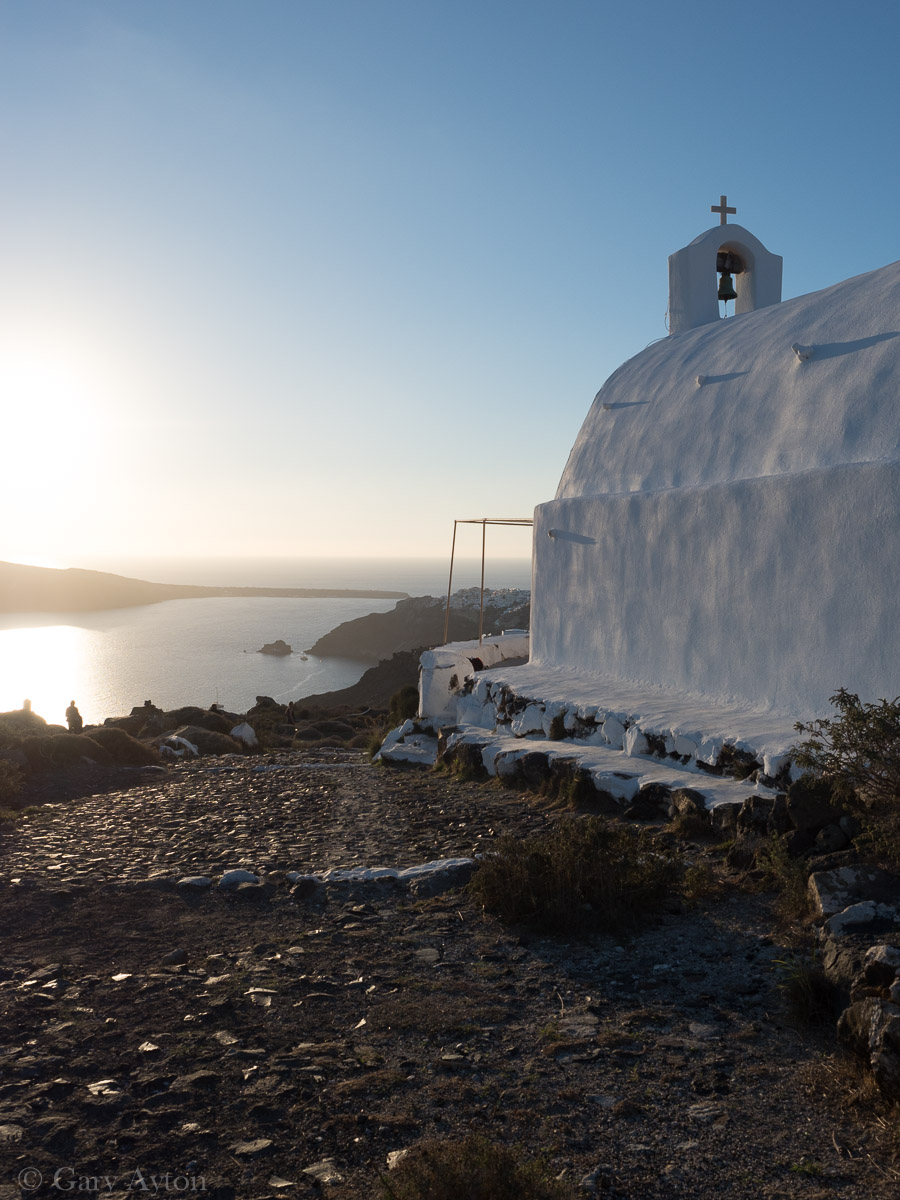 More churches as we almost ran through Oia looking for our restaurant. Oia was devastated by an earthquake in 1956 and re-built to strict heritage aesthetic standards. 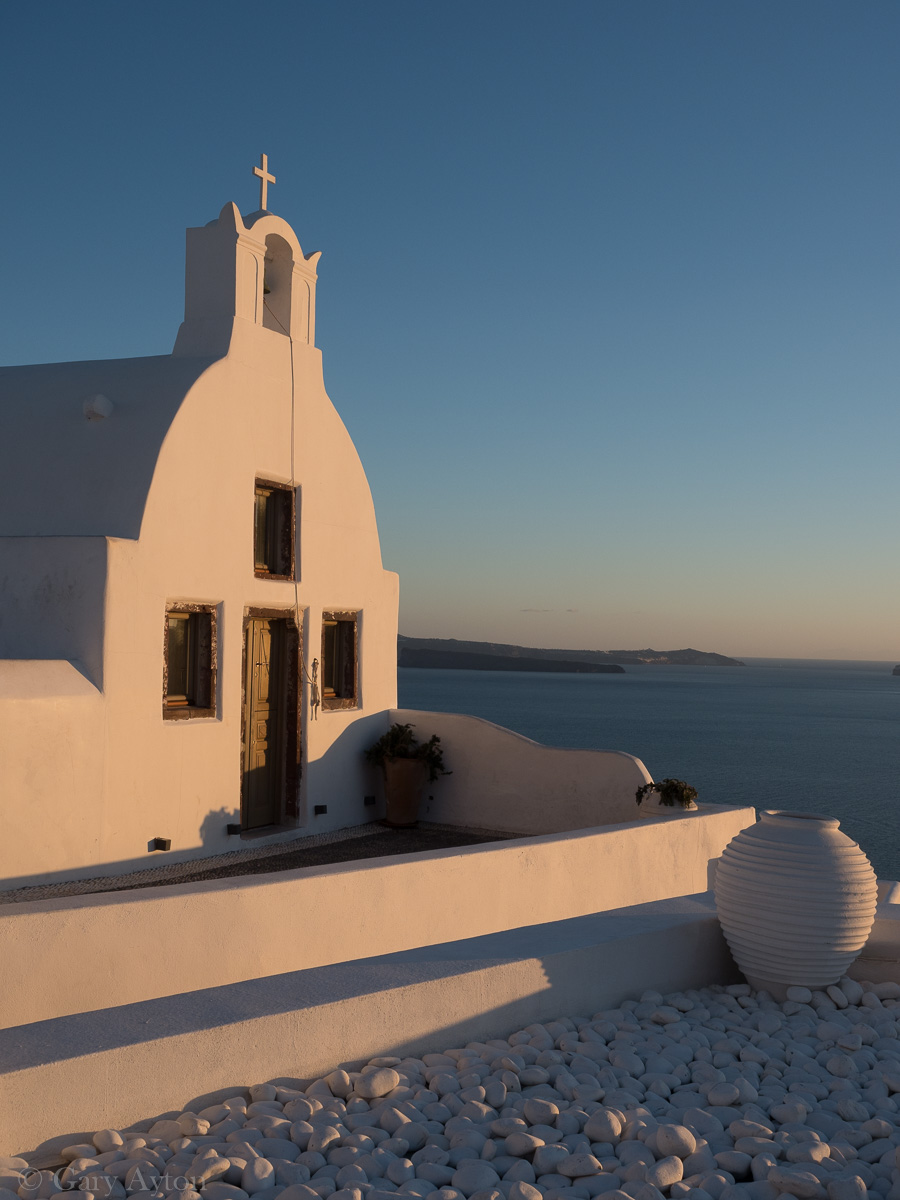 But then the cameras had to go away to get through the crowds watching the sunset and then make our way down a thousand steps with a multitude of donkey dropping land mines which were increasingly difficult to see in the fading light, and yes, we got to the restaurant a little late for our sunset shots but still, it was a lovely seafood meal and the beer was much appreciated!

In addition, the inexpensive Santorini bus service can take you to some nice beaches and an archaeologic site from some 3000 yrs ago when the Minoans and Myceneans were living on the island before the volcano erupted and covered the towns in thick ash as with Pompeii, although it seems most were able to evacuate Santorini before the eruption.

At no stage did I reach for my shallow depth of field lenses – hence, there is little benefit in carrying heavier, more expensive full frame gear – in my mind, the Micro Four Thirds kit is THE PERFECT travel kit!