One of my favorite walk around and people photography kits is the Canon 1D Mark III pro dSLR camera matched with the lovely Canon EF 135mm f/2.0L lens.

Given the 1.3x crop factor of this camera, this combination in effect gives me telephoto reach of a 176mm lens on a full frame camera.

This focal length allows me to be more versatile in selection of backgrounds by virtue of compression of the perspective, while the f/2.0 wide aperture allows one to make the subject pop by having a shallow depth of field (in most situations, a touch too shallow hence I often use f/2.5 or f/2.8 for people photography), and it renders the background with a lovely smooth bokeh.

If you are shooting into a light source, using the lens shade is a must to minimise internal lens flare which is the main issue with this lens.

My biggest problem with this outfit is that it is so big and heavy, I usually don’t bring it with me unless I have something specific in mind.

I have been searching for a similar image drawing outfit with my Micro Four Thirds camera – the now very cheap, Panasonic GH-1 (you can buy it for about a fifth of the price of a Canon 1D Mark III).

I tried the Canon EF 85mm f/1.8 lens, which although is a very nice lens, suffers from considerable purple fringing.

Last week, I received the Rokinon (Samyang) 85mm f/1.4 manual focus lens in Canon EF mount which I bought from Amazon.com for the ridiculously cheap price of $US265.

Now this lens on the GH-1 gives a telephoto reach of 170mm and a depth of field at f/1.4 similar to what my Canon outfit above would give me, furthermore, this 85mm lens is reknown for its buttery smooth background bokeh.

Of course with the GH-1 you will have to resort to magnified live view for accurate manual focus but at least this is much easier than on a dSLR with its annoying mirror, and thus you may be more limited to relatively stationery subjects, but that suits me fine, as long as I can get a similar image quality at a third of the weight and size, then I will be happy.

Here are a few shots of each camera taken from identical positions at wide open aperture, hand held as I would normally take them, and focussed on similar spots with no post processing of the in-camera jpegs other than merging and then resizing and compressing for the web. Note I did not use a lens hood for any of these shots, as forgot to bring it for the 85mm so to be fair, I left it off the 135mm lens – something I would NEVER normally do for that lens! The sun was not directly hitting the lens glass in any of these images.

Click on the images for a larger view. I will tell you which is which at the bottom of this post. 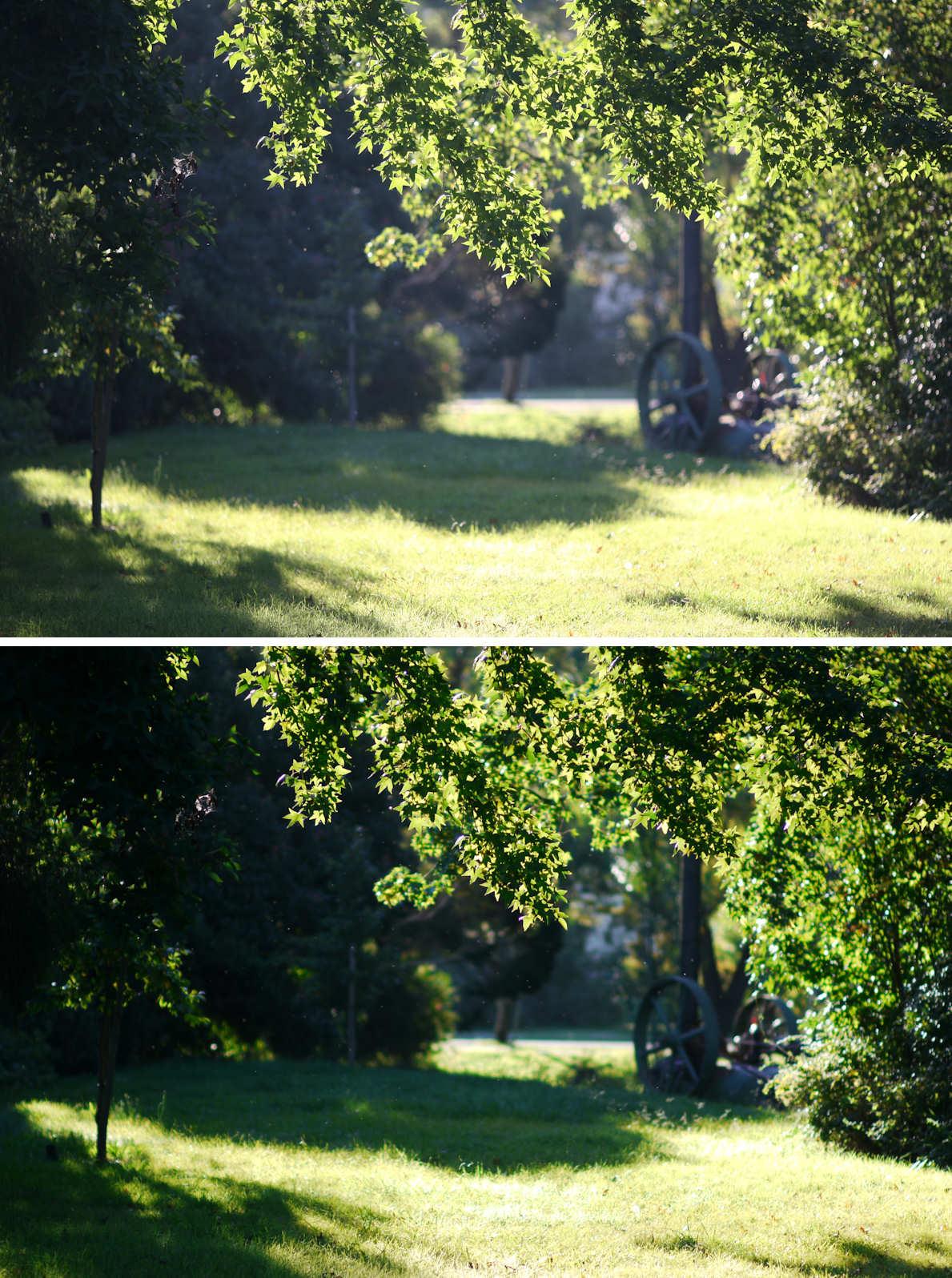 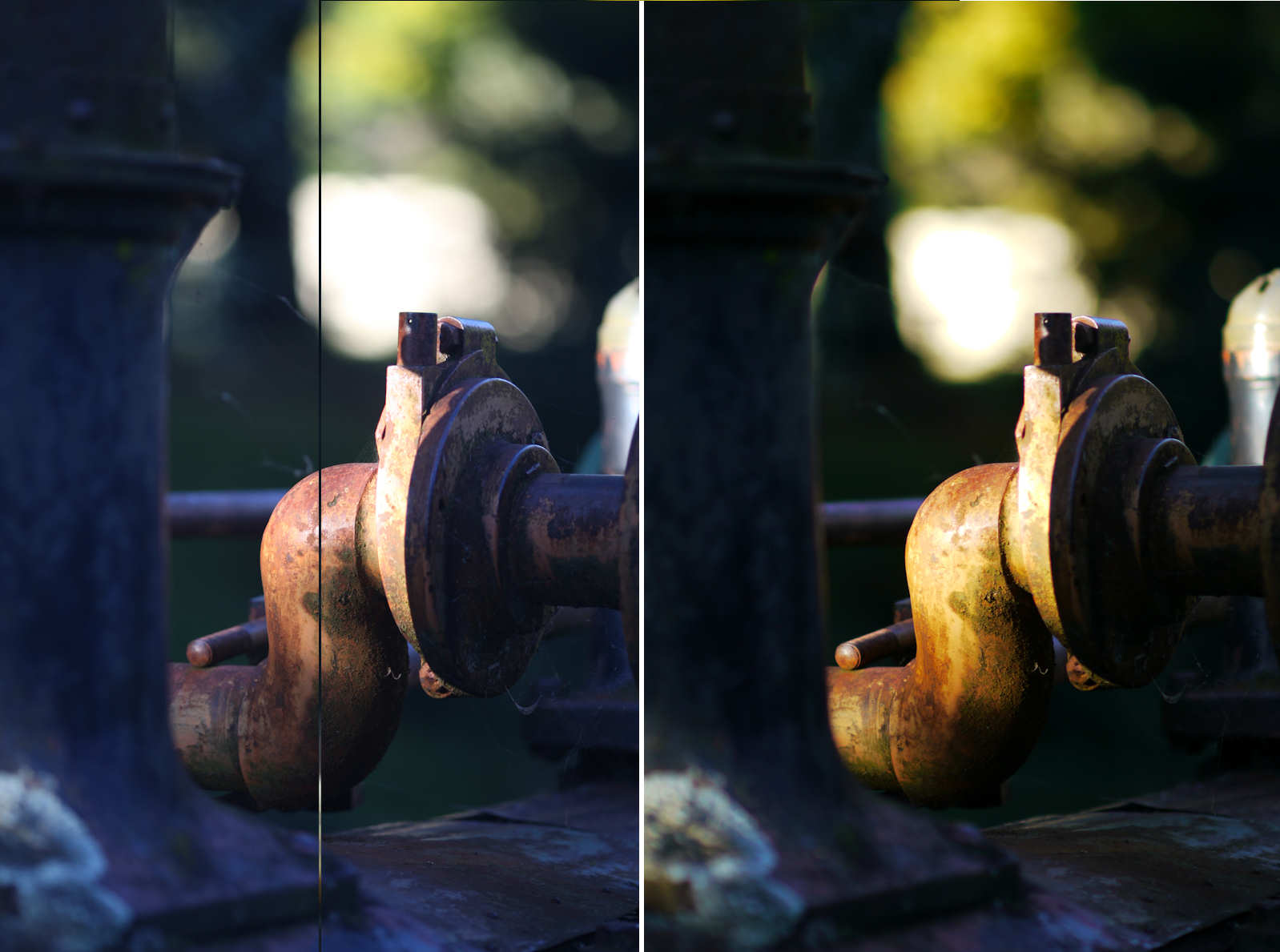 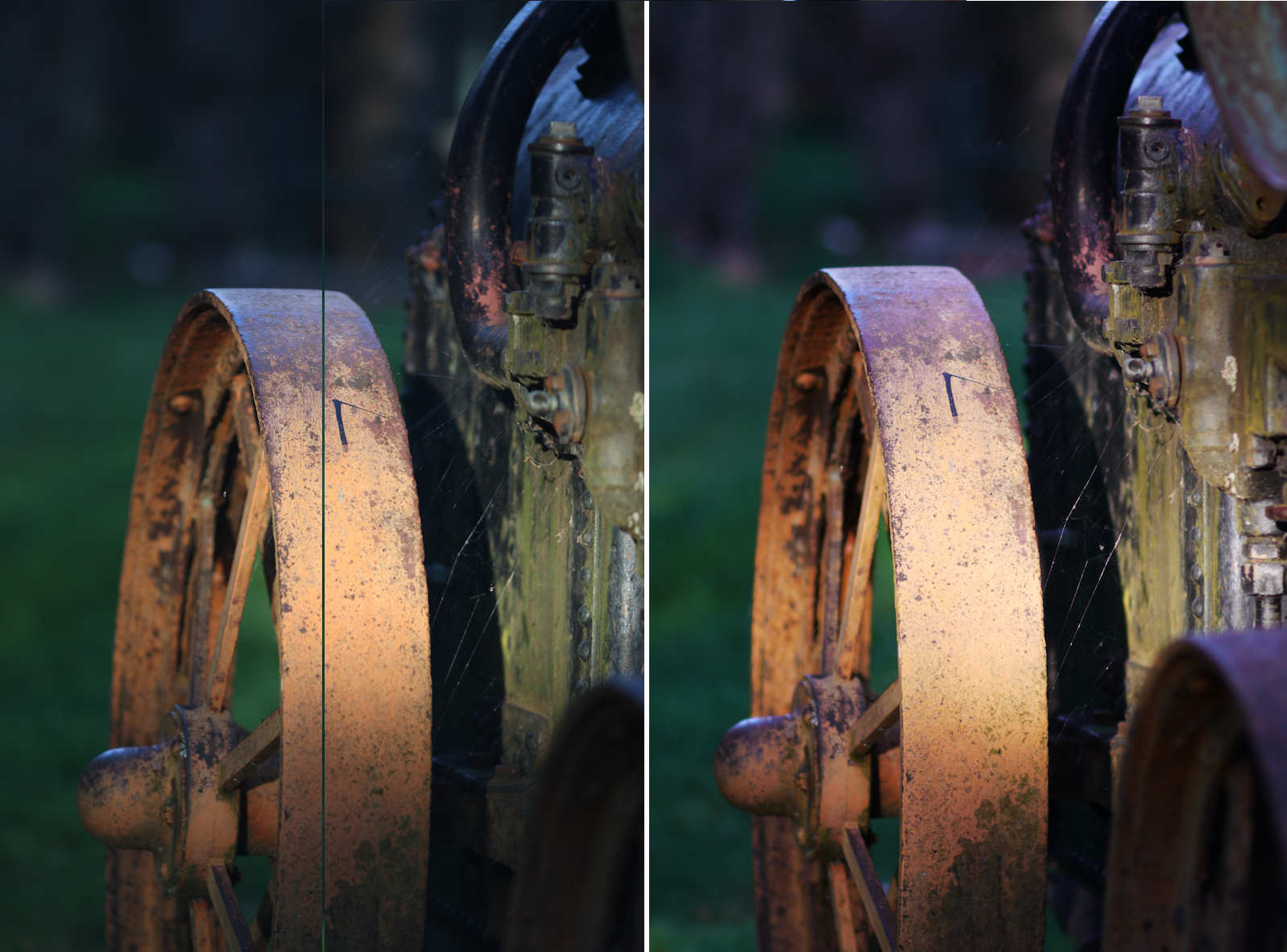 OK, have you decided which you would prefer or are they both similar enough you would be happy to use either?

1st image, the Canon is the top one, while the other two images, the Canon is the image on the left (with the unfortunate vertical line I stuffed up in my editing of the files, and I apologise too for the jpeg compression artefacts – I am not used to Corel’s software which I have had to resort to as my laptop with PS on it just died).

In the 2nd image taken late in the afternoon, the Canon 1D Mark III rendered it a lot cooler than in reality.

The important point in these images is how the background is rendered – almost identical – and that purple fringing is not problematic in any of these.

I think I am on a winner here with this 85mm lens – and it has manual aperture control, plus I can use it on the Canon 1D Mark III if I wish.

I can’t see much difference between the two, other than the more contrasty rendition by the Panasonic (I forgot I had it set to Dynamic Film Mode), and perhaps the 85mm lens draws out of focus foregrounds less well, and it may be a touch less sharp wide open.

For those who are budget challenged, or who just want a small kit to carry around, the Rokinon 85mm f/1.4 is worth a look at that price!

For those who need 10fps, relatively fast AF, weatherproofing, TTL flash, remote TTL flash, or flash sync 1/500th sec (with Pocket Wizards) for outdoor fill in flash in the sun at wide aperture, then you will have to keep your Canon kit as the Panasonic outfit just won’t cut it on these requirements.