There is a logical belief that full frame cameras provide substantially wider dynamic range than cropped sensor cameras such as the Micro Four Thirds cameras.

I stumbled upon this testing chart today and was blown away by the lack of difference at ISO levels above 200 when comparing the Olympus OM-D E-M1 Mark II camera with these full frame cameras.

Way back in 2007, there was a dramatic difference – the Olympus Four Thirds dSLRs were handicapped with poorly performing Panasonic sensors which had substantially worse dynamic range than the 1.3x crop APS-H sensor in the pro dSLR, the Canon 1D Mark III which I had bought at the time to supplement the deficiencies of my Four Thirds system.

BUT, times have changed, and the dynamic range performance of the current models in the chart below are much improved over the Canon 1D Mark III, and surprisingly similar at ISO values over 200.

At ISO 50-100, the current full frame cameras do perform substantially better, but this difference is largely gone by ISO 250 – this is quite a revelation to me, particularly as I shoot 90% of my Olympus images at ISO 200-400, and generally shoot my Sony a7II at higher than that when shooting hand held in available light, but it would seem I am not gaining any substantial dynamic range in doing so! 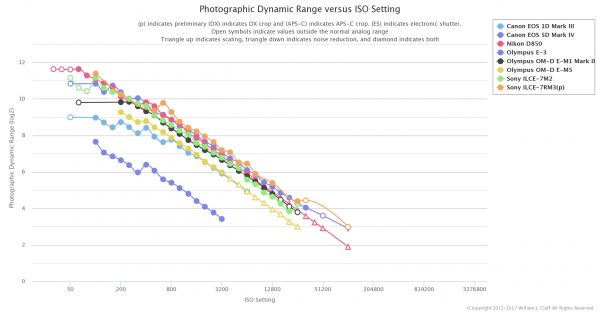 Here is the link to the charts from Photons To Photos if you wish to play with them yourself.

As the stated ISO on Olympus cameras measures around 0.7EV LESS than those on Canon, Nikon and Sony full frame cameras (as per the Photons to Photos measurement and DxOMark measurements, and my real life testing), I have made a new chart which adjusts the Olympus E-M1 Mark II results to allow for this which pushes the line to the left a little and creates a little more difference in the dynamic range at a given ISO equivalence: 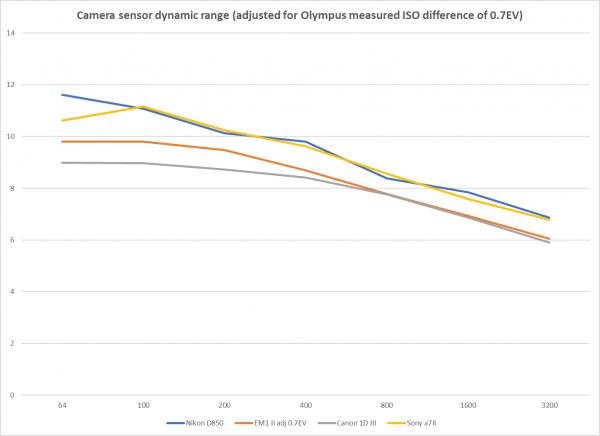 The dynamic range at ISO 400 or over on ANY of these full frame cameras is LESS than the dynamic range of the Olympus E-M1 Mark II when this is shot at its in-camera stated ISO levels of 100-200.

If you want substantially wider dynamic range on the full frame cameras you need to be shooting at ISO 100 – and this will probably mean tripod territory for many full frame situations given the aperture is likely to be smaller to gain the desired depth of field with slower shutter speeds, and their systems will not have the same image stabilisation capabilities as the Olympus camera.