Following on from my introduction to the Red Centre which covered why go, getting there, accommodation and car hire issues, for many the first major stop in central Australia will be the remote semi-arid township of Alice springs which is half way between Darwin and Adelaide – 1,500km from each.

The airport is some 20km from the town and taxi fare will cost about $35 into town although some car rental companies may offer personal pick up, and in addition there are regular shuttle bus services which will cost about $17 per person.

The Ghan train between Adelaide and Darwin does stop in Alice Springs and this may be an attractive alternative to getting there.

Most of the main accommodation resorts are on the east side of the dry Todd River in the “golf course precinct” and are about 2km from the shopping centre which is on the west side of the river and towards Anzac Hill in the north.

Once in Alice, cycling and walking are common modalities if you can’t catch the shuttle buses and you don’t have a car.

The Alice Springs shopping centre has most items you would need including a camera shop but is certainly not a shopping destination – although given a population of 28,000 one would not expect it to be.

There are very few historic buildings in Alice but it is worth checking out The Residency which was the Governor’s house, and you may wish to cycle or drive to the Alice Springs Telegraph Station a few kilometres north of the town.

Things to do in Alice Springs

Relax and explore the many native flora in the Olive Pink Botanical Gardens and climb the hill for nice views across the town to Anzac Hill and to Mt Gillem. 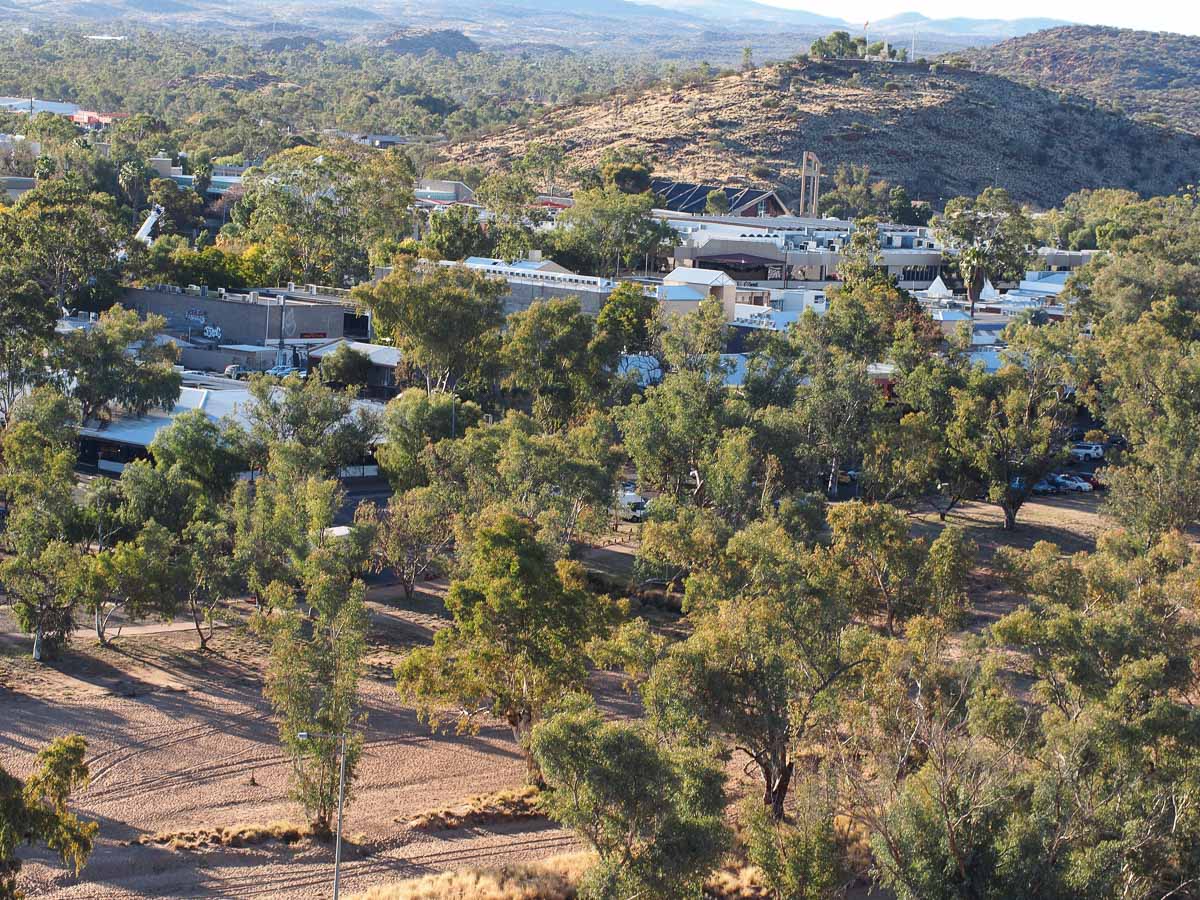 The view of main township from Botanical gardens hill over the dry Todd River bed and towards Anzac Hill.

Relax by the pool in the lovely winter sun at your resort.

Walk through town and check out indigenous art works and learn about their culture.

See the desert wildlife at the Desert Park.

Day trips to the East or West Macdonnell Ranges and explore their gorges.

Day trip to historic Hermannsburg (a 19th century Lutheran missionary community) and Palm Valley (if you have a high clearance 4WD and you can take it on the very rough roads).

Mt Gillen is the tallest peak near Alice Springs and climbing it is like a rite of passage for those staying in Alice Springs.

It is named after ethnologist, Francis James Gillen.

It is a challenging walk which rises over 360m from the start of the walk at the John Flynn Memorial on Larapinta Drive some 7km from town, on often steep, slippery gravel paths requiring reasonable fitness and coordination skills along with stable knees and ankles. It is a very exposed walk and you will need sunscreen, sunglasses, water, a hat which will not get blown off your head, sturdy shoes, phone, and preferably at least one companion in case you do suffer an injury.

The last phase involves a near vertical rock climb of some 5-6m which is not for the faint hearted but provides a rewarding walk along the top to the beacon which provides glorious views over the ranges and of Alice Springs.

These views are best at sunrise or sunset when it is also much cooler (you will need a warm jacket and gloves if going at sunrise), and you should be carrying a headlamp to help to see your way along the path in the dark. 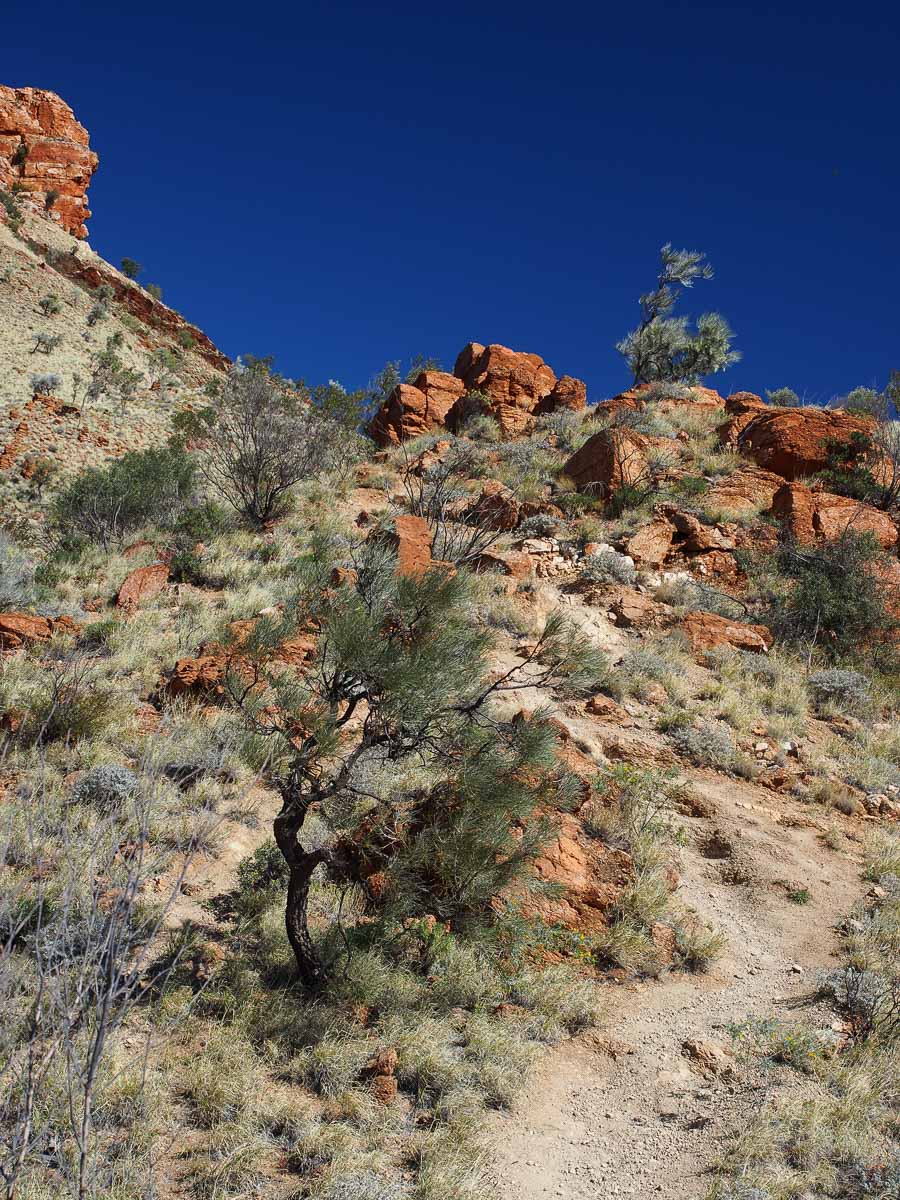 Perhaps 2/3rds of the way up Mt Gillem showing the top cliffs which need to be negotiated. 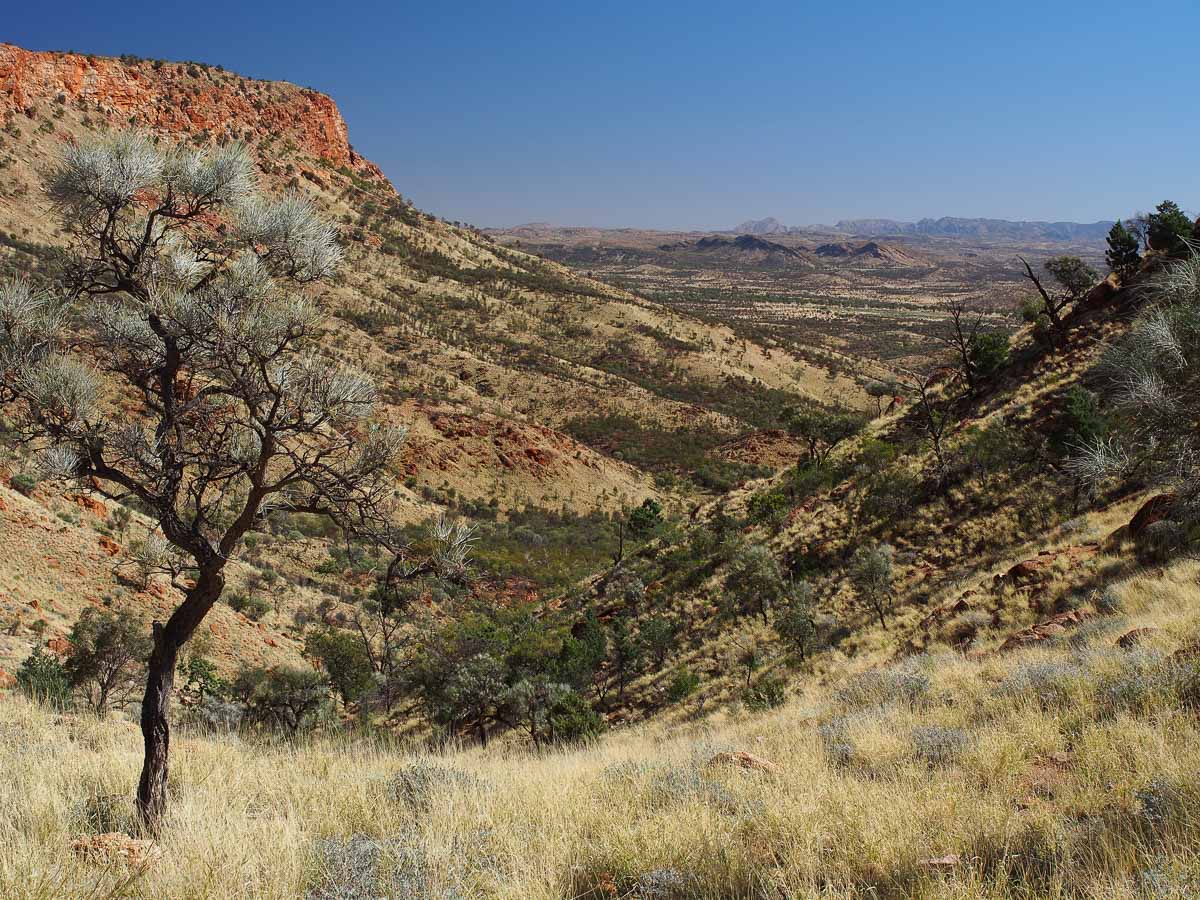 The wonderful view across to the West Macdonnell Ranges and Mt Sonder in the far distance. 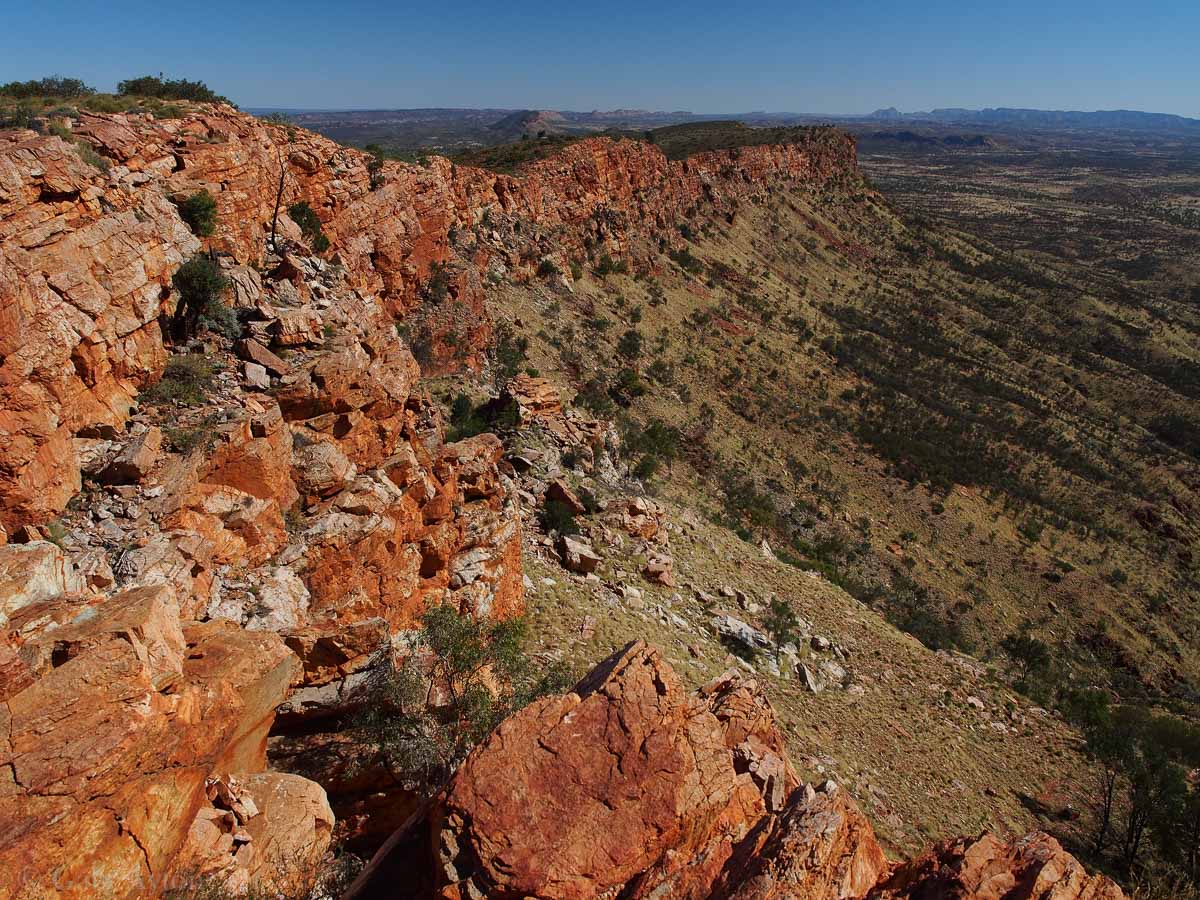 After the relief of surviving the cliff climb, you look back to this view westwards. 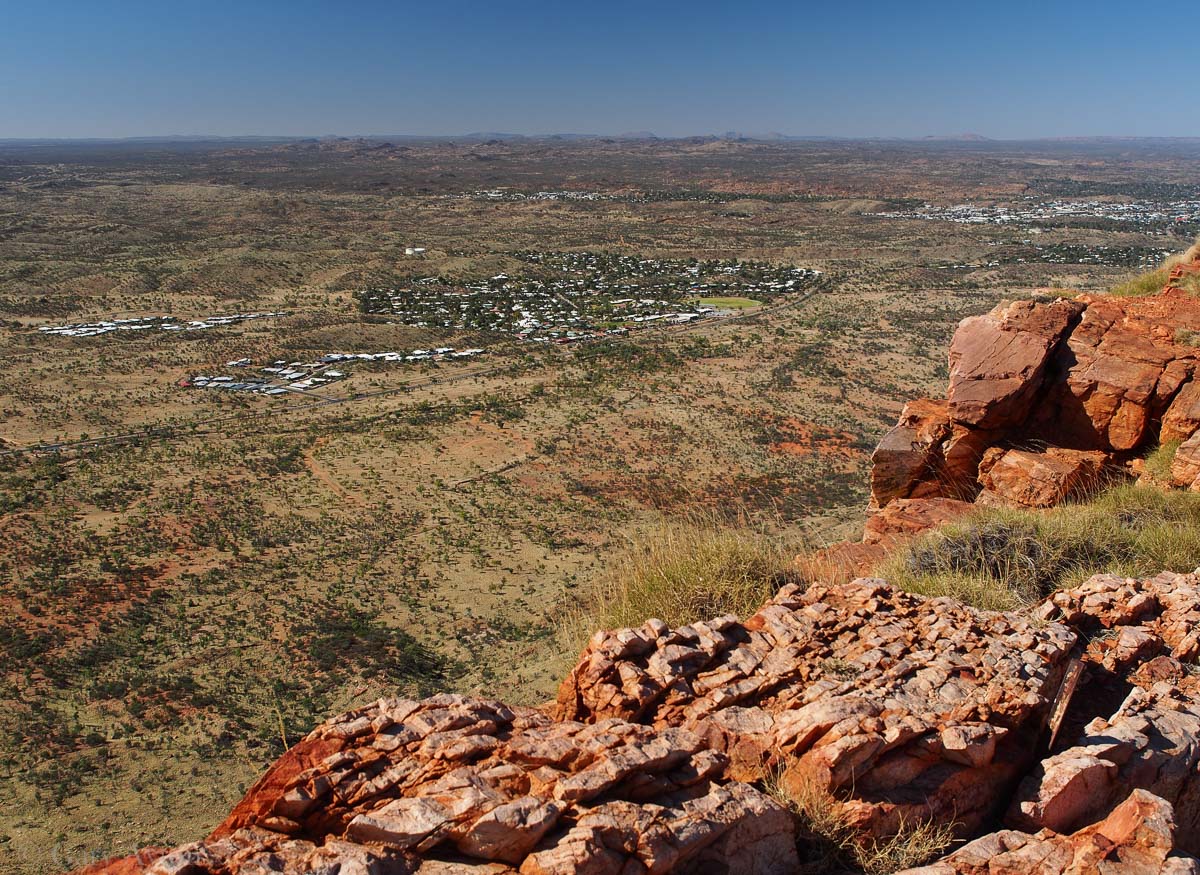 A short walk from there across the top to the beacon gives a view to the north-east overlooking Alice Springs.

All images taken with Olympus OM-D E-M5 with Olympus mZD 12-40mm f/2.8 lens and circular polarising filter and essentially are straight from the camera other than resizing for web.

This very strenuous walk is NOT great for large, heavy dSLRs, especially if one is silly enough to carry a tripod as well – although I am sure you would get some nice pre-sunrise shots for your hike up the mountain in darkness – if you survive.

Towards an understanding of the plight of Australian indigenous peoples

Let me first state, that their issues are complex and I have only had a very brief introduction to them, and what I present here is my perception from what I have been told in a few days in Alice.

Firstly, they arrived in Australia some 40,000 years ago and developed a strong connection with the land and its sustainable management – that was until the British arrived in 1770 and subsequently colonised the continent, bringing diseases and substantial culture change to these people, and worse, bringing their arrogance of how they should live and often with very few of the rights and expectations that the whites had available to them.

It would seem the indigenous peoples in Alice Springs, of which there are some 4,800, do not wish to be assimilated into white culture, and wish to retain their own cultures and cultural identities. This has been extremely difficult psychologically with their loss of identity and respect in the white world – after all, by aboriginal laws, their indigenous destiny, society roles and responsibilities had been decided well before they were born, but these are rarely respected by the white people. This is part of the reason for the high alcohol abuse and resultant domestic violence, crime rates and imprisonment that is currently endemic.

This is further compounded by poverty (75% are in the lowest socioeconomic quintile compared with 10% of non-indigenous people) and poor access to well constructed housing, heating, food and water in a harsh environment with very cold winter nights and very hot summer days, the combination of which leads to very high endemic rates of disease rarely found in white people of Australia such as:

Aboriginal presentations to the newly developed Alice Springs emergency department account for around 50% of all adult presentations and around 70% of all adult hospital admissions despite the aboriginal population being only 17% in Alice (although catchment area is 45,000 people and a third are aboriginal), while life expectancy is some 15 years shorter than non-indigenous peoples in the region at 63yrs for males and 69 years for females. Age adjusted death rates are 3.5x higher and hospitalisation rates are 6.5x higher than non-indigenous people. 70% of deaths occur before age 65yrs compared with 21% of deaths for non-indigenous people. The hospital has high re-admission rates of 28% within 30 days and high own discharge rates. Many indigenous people do not trust the white hospital system, and furthermore, many wish to die on their land rather than in hospital.

The challenge is to find effective and culturally-appropriate models of care to reduce this disease burden which is compounded by the remoteness and poverty of many of these communities.

The Northern Territory has the highest per capita rates of fatal road trauma in Australia (over half are due to single vehicle rollover accidents, and most are tourists aged 20-40yrs) which is due to a number of factors: 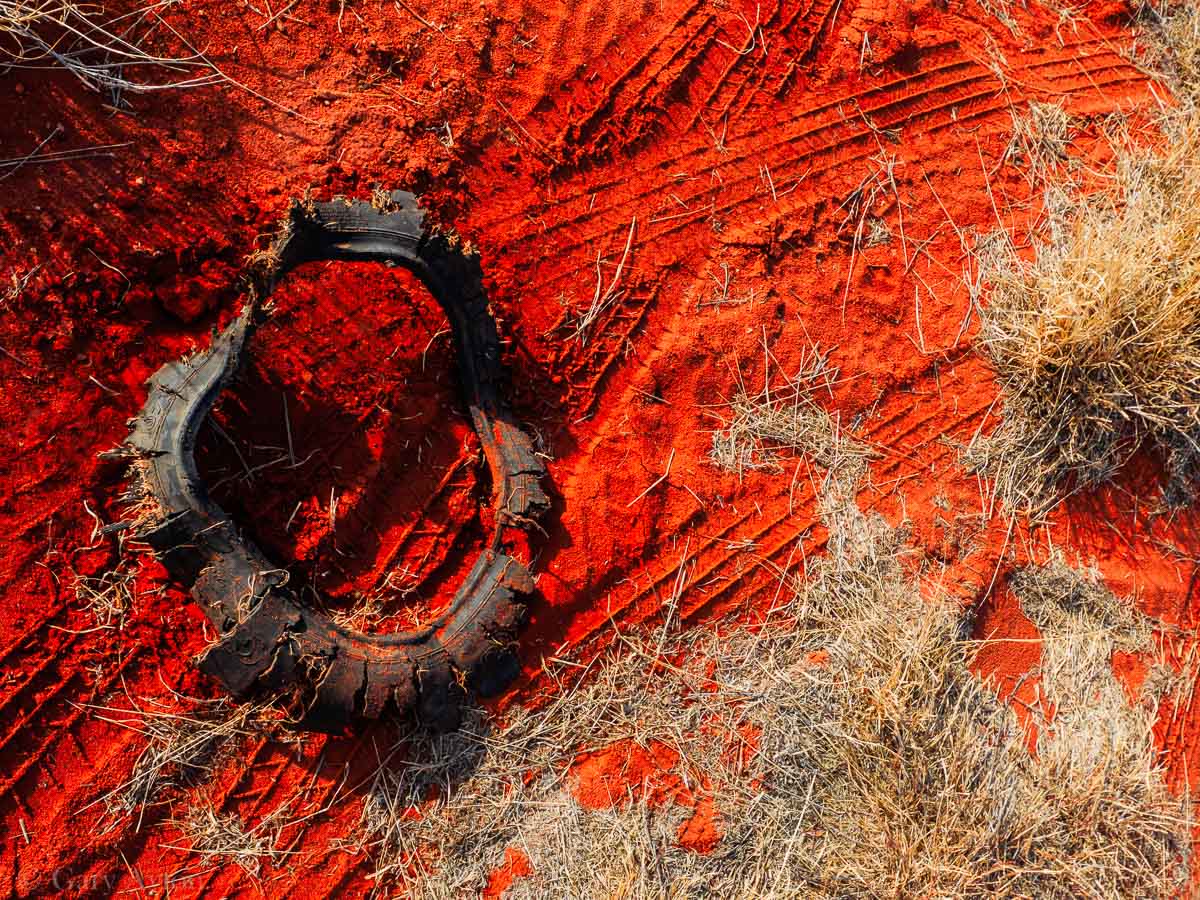 A blown out tyre on the remote Mereneenie Loop unsealed road between Hermannsburg and Kings Canyon.

Next post will be exploring the West Macdonnell Ranges.