Shallow depth of field in photography – a double edged sword

Back in the old film days, many photographers were plagued by the problem of not getting enough depth of field for the light on their subject and the slow film speeds of the day and no image stabilisation to allow longer shutter speeds.

Depth of field issues is one of the reasons expensive tilt-shift lenses were designed so that landscape photographers even with their cameras mounted on tripods so they could use f/16 apertures could get their whole image acceptably sharp and detailed from foreground to background.

An out of focus foreground or background in a documentary landscape can be extremely annoying for the viewer.

On the other hand if your subject is not the scenery but a discrete subject, then shallow depth of field can be used brilliantly to separate your subject from the otherwise distracting background and make them “pop” – a favorite technique of the romanticists out there.

The excitement over the great image quality and versatility of the awesome new Olympus OM-D E-M5 Micro Four Thirds camera has yet again ignited debate that as great as it is, it can’t ever achieve the shallow DOF of a full frame dSLR even though for many other purposes most people would not be able to tell the difference between a 30″ x 40″ print from either camera.

I decided to post this blog based on some recent experiences which demonstrate the double edged sword of shallow DOF – as much as I love it as a tool, it can easily work against you.

A full frame dSLR sensor size will always give you more control over depth of field than a smaller sensor camera in that one can choose to go deep DOF by closing aperture down further than a small sensor camera before diffraction limitations start destroying your image resolution, and one can usually go shallower DOF by choosing a wider aperture lens for a given field of view.

The advantages of full frame dSLR for shallow DOF are particularly the case for subjects taken at a distance of more than 1-2m with a wide to standard field of view lens.

For macrophotography, close up photography and telephoto photography, Micro Four Thirds will generally be able to deliver you as shallow a DOF as you need as long as you have a reasonable aperture lens.

So you get the picture if you place a super expensive wide aperture lens on a full frame dSLR you will nearly always be able to get more DOF control than when using a cropped sensor camera – that’s just the way it is.

BUT, this capability has it’s downsides.

1. you now have to think about your subject very carefully and decide how much DOF you need to capture it well, and thus exactly which aperture for the given lens and subject distance.

2. if you are forced to use wide aperture such as hand held shots at night, or wide aperture sports shots at fast shutter speeds, you may be plagued with the age old problem of not enough DOF and most viewers hate a blurry subject!

Let me demonstrate each of these from my own recent experience.

1st a couple of potentially stuffed up shots.

Now as I have mentioned before, using the amazingly cheap Rokinon/Samyang 85mm f/1.4 on a Micro Four Thirds camera yields almost identical imagery (field of view, DOF and bokeh) as this combination at a quarter the weight, size and price, but that is another story – see here for related posts of this lens:

I generally shoot half body shots with this lens at f/2.5-f/2.8 to get sufficient DOF for my subject, so for this couple shot, I lazily just closed the aperture down a bit more to f/3.2 to give me a touch more DOF without making the background too distracting.

Unfortunately, I failed to chimp the image after the shot was taken to carefully check my DOF (it didn’t help that the Canon did not have an EVF to do this and my reading glasses were left in the car!).

Needless to say, the bride looks beautiful and sharp, but the groom is well out of focus, and I had to salvage it a bit by turning it into a romantic looking shot – luckily I was not the official photographer! 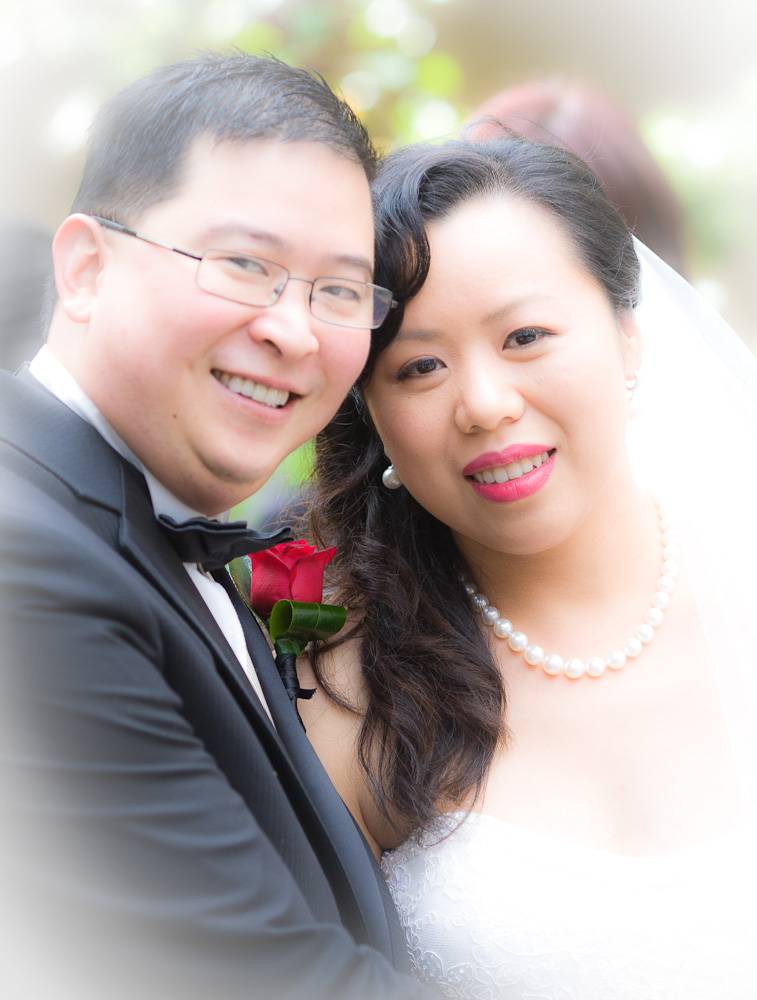 Ah, yes, what a crappy photographer I can be sometimes! But surely I can’t get too shallow a DOF using the new Olympus OM-D E-M5 camera with its cropped sensor…

oh yes I can…..this is the 1st shot I took using the Olympus mZD 45mm f/1.8 lens playing around with the fun touch the screen on the subject and almost instant AF and shutter release: 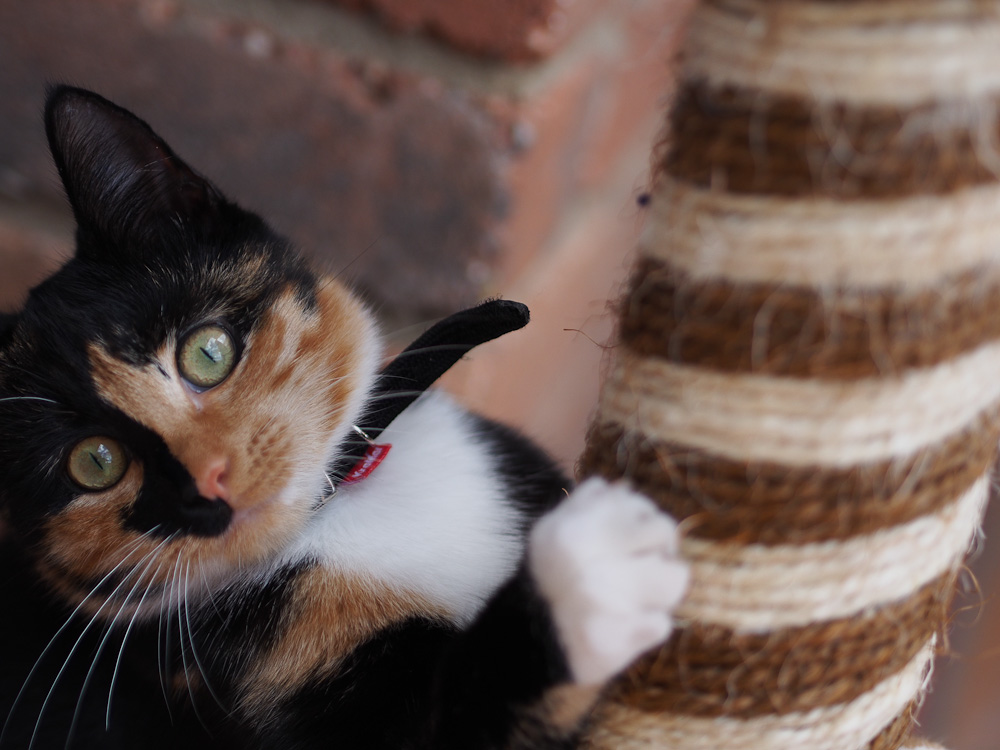 OK, it is a lovely candid shot of my mischievous kitten but closer inspection will reveal that her eyes are incredibly sharp even with this lens at f/1.8, but her nose is well out of focus – a big mistake in portrait photography – always aim to get tip of nose to ear in focus unless you are aiming for special effects like with my tilt-shift lens where one can change the plane of focus such as in the glamour portrait below: 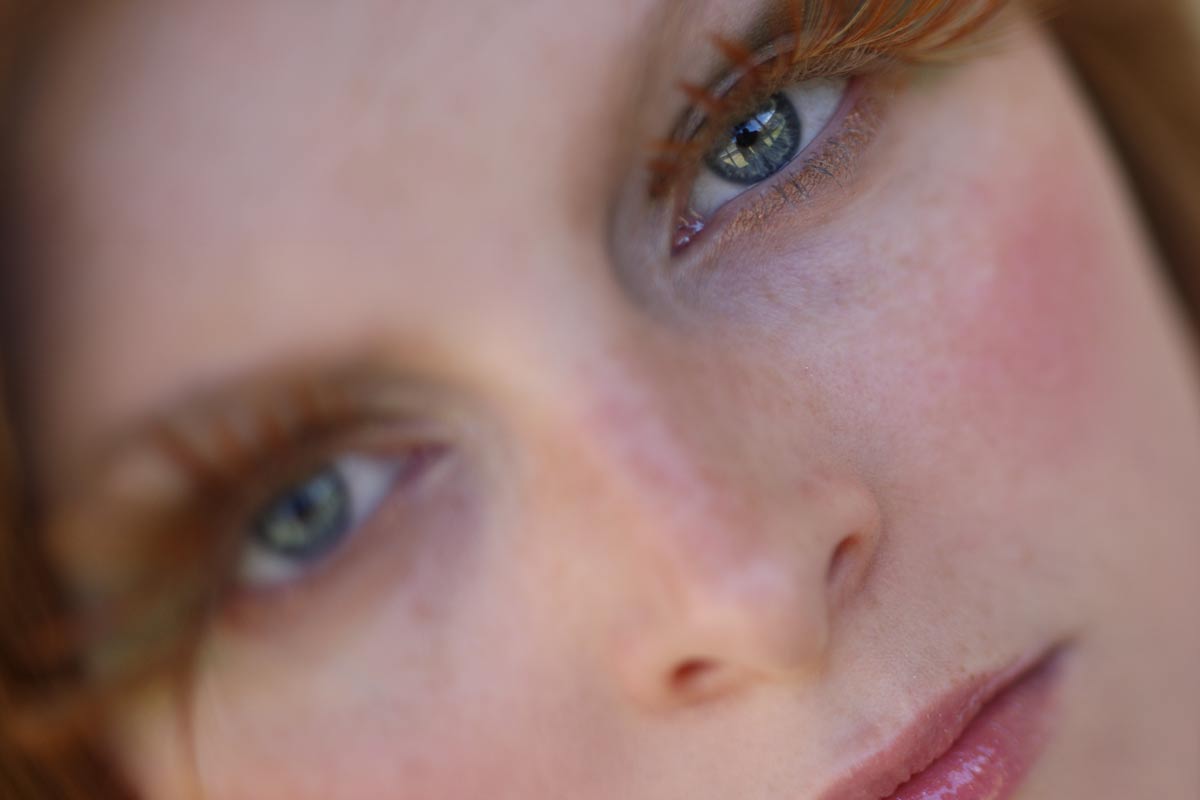 In summary, a cropped sensor camera will not replace the capability of ultra shallow DOF of a full frame dSLR, but a camera such as the Olympus E-M5 when teamed up with wide aperture lenses opens up new avenues for hand held low light photography whilst still maintaining an adequate DOF for your subject.

For most of us the Micro Four Thirds system when teamed with its lovely wide aperture lenses such as the 12mm f/2.0, 25mm f/1.4, 45mm f/1.8 and 75mm f/1.8 will address our shallow DOF as much as we need and for those who want to explore more shallow DOF, then they can enjoy the manual focus f/0.95 lenses, or even use the Canon 85mm f/1.2 and have them all image stabilised.