Stage III of my road trip was just north and north east of Maryborough – the geographic centre of the “Golden Triangle” of the 1850’s gold rush and a great place to base one’s explorations of the nearby ghost towns.

Although only a few kilometres from Maryborough, the ghost town of Timor was once a thriving community with a population of 27,000 and 38 hotels. The last hotel closed down in the 1960’s and the General Store has closed down in the last decade (Olympus mZD 12mm f/2 lens at f/5). 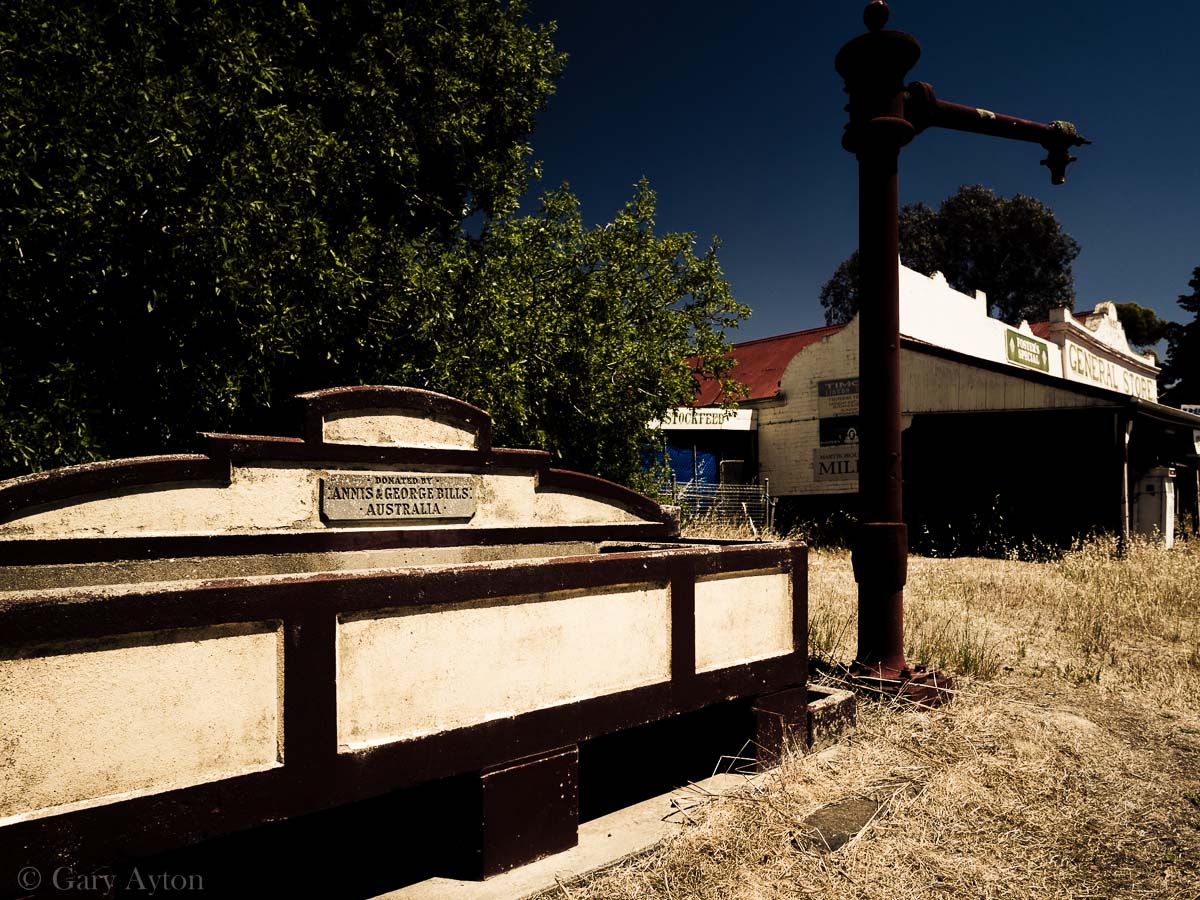 The town of Timor was the result of the adjacent large gold mine – the Grand Duke Gold Mine of which there are few remnants remaining such as the main entrance granite arch of the pump house upon which the beam of the pump sat (Olympus mZD 12mm f/2 lens at f/5): 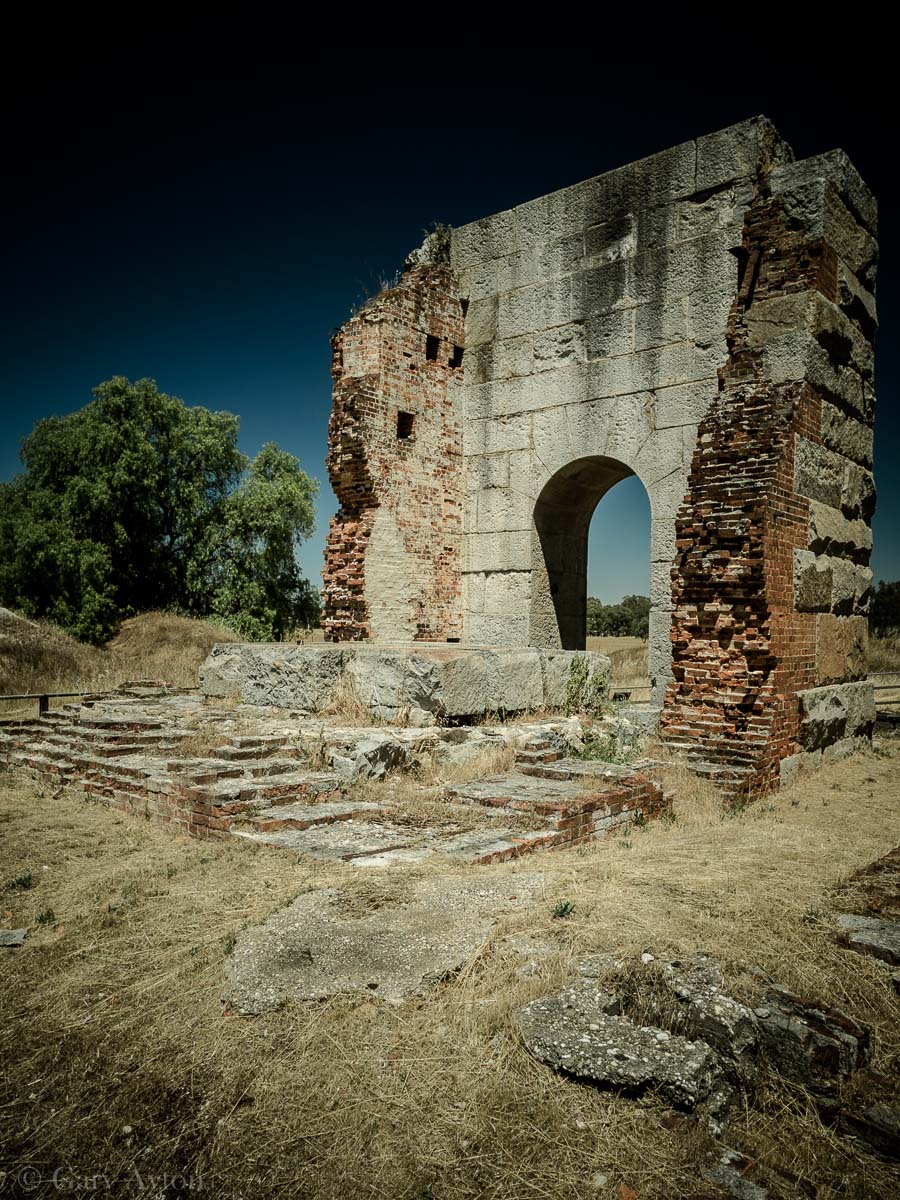 The Grand Duke mine operated from 1869 to 1896 and produced 216,000 oz of gold and was sited upon a deep lead of auriferous quartz which was about 4 miles long – hence an adjacent mine the North Duke Mine also operated on this lead.

This gold mine boasted the biggest and the first Cornish beam pump in Australia with only 2 others of that size in the world – it was imported from England in 1874 and had a massive 30 ton iron beam, used 270 horsepower and pumped 200 gallons per stroke and 2000 gallons of water per minute and 20 million gallons per week out of the 110m deep mine shafts during the last 7 years of its life making the mine the longest and most continuous wet mine in Victoria. The pump did break down in 1879 resulting in the mine becoming flooded and out of action for 2 years. An accident in 1883 killed 4 men.

Wherever possible the miners mined upwards as this was easier as the material fell to the floor and was more easily loaded into skips – this method is called stoping.

The mine required a massive amount of timber to shore up the shafts plus hundreds of tons of firewood was need each week as fuel for the boilers. This devastated the region’s forests and by the end of the century each acre only had a few twisted old trees, and on average 15 young trees. At the turn of the century, the Maryborough forests were closed as a source of timber for mining.

In 1896, finance became an issue and the pumps were stopped and the mine permanently closed, and it was reported the water levels in the shafts rose by 8.5cm per day.

From this mine, one can drive along the gravel road to Bet Bet which is now also pretty much deserted as indicated by the owners putting this old weatherbeaten Church of Christ weatherboard church up for sale along with the cacti (Olympus mZD 45mm f/1.8 lens at f/5): 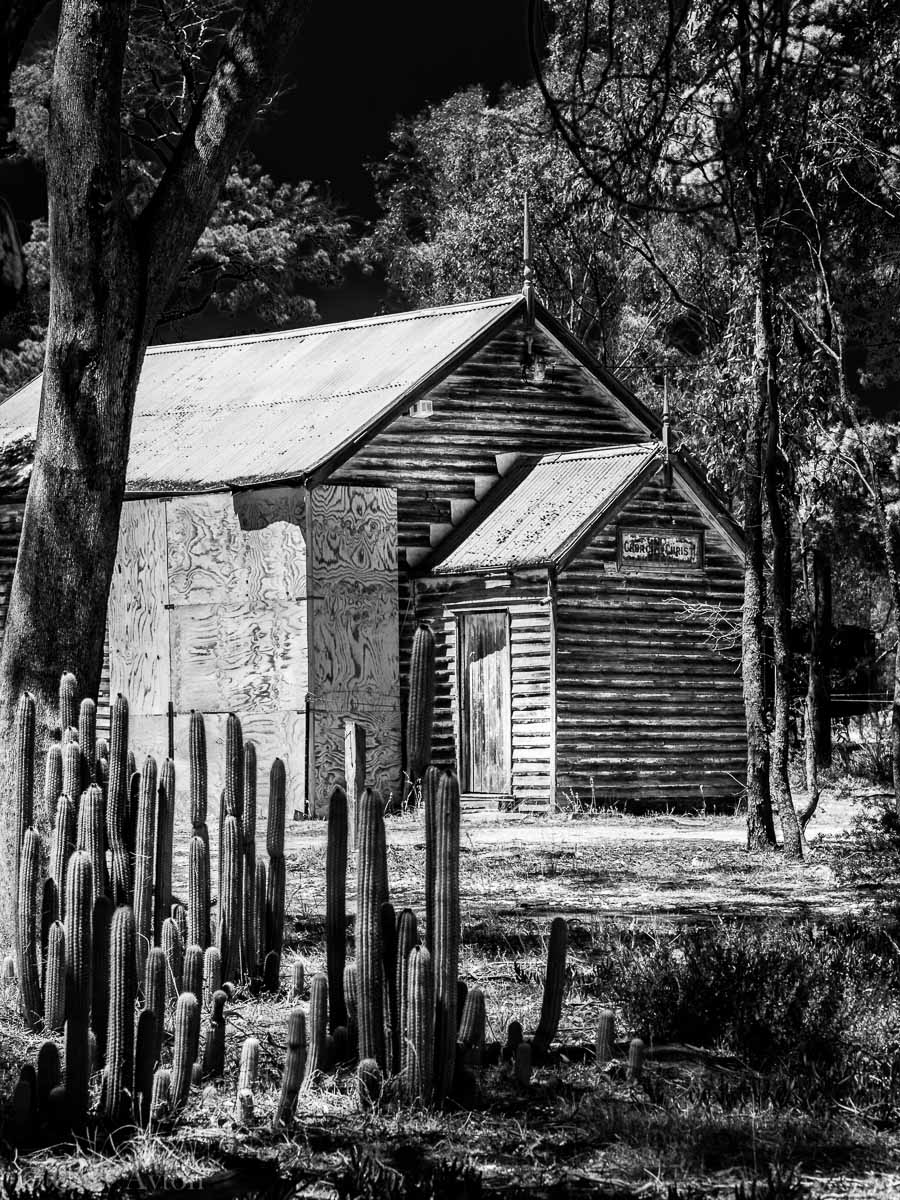 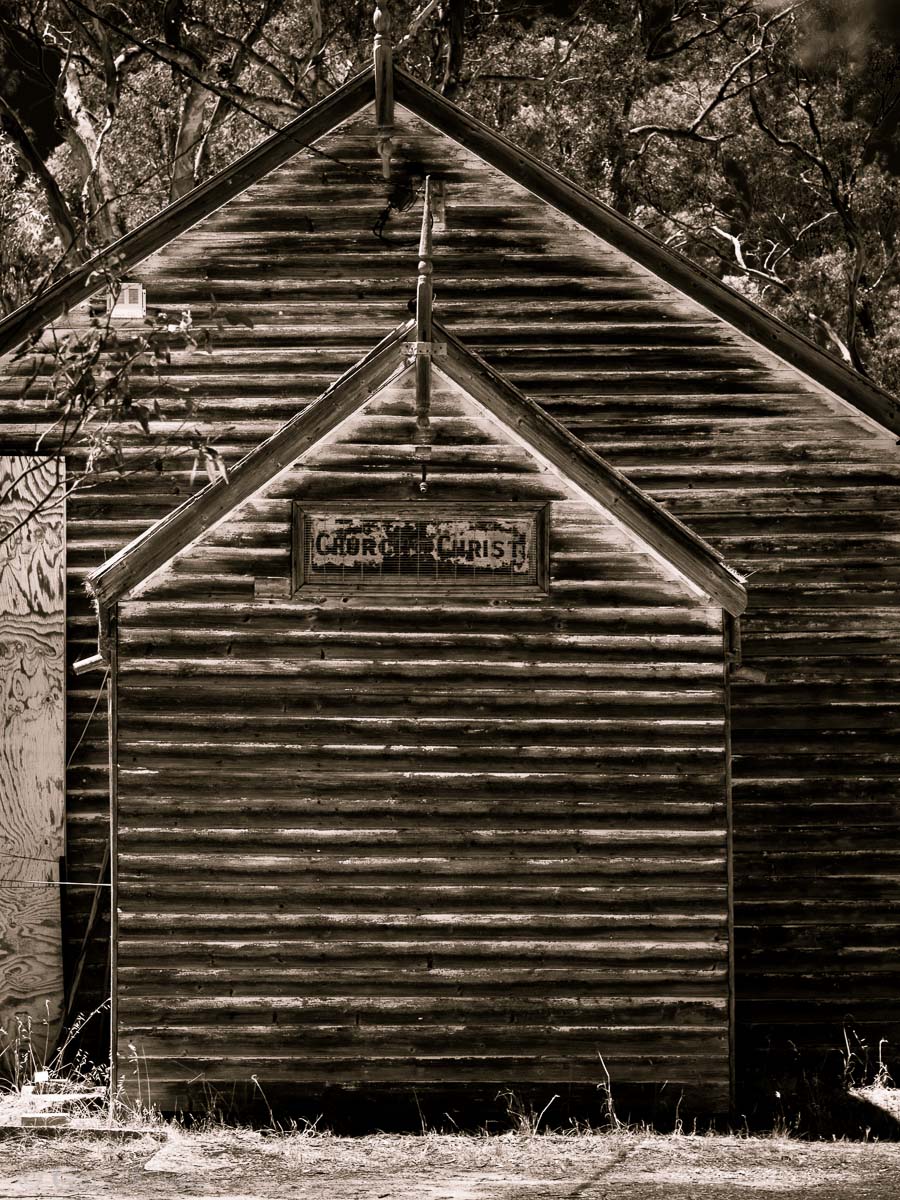 Heading north from Bet Bet one can find this old cottage: 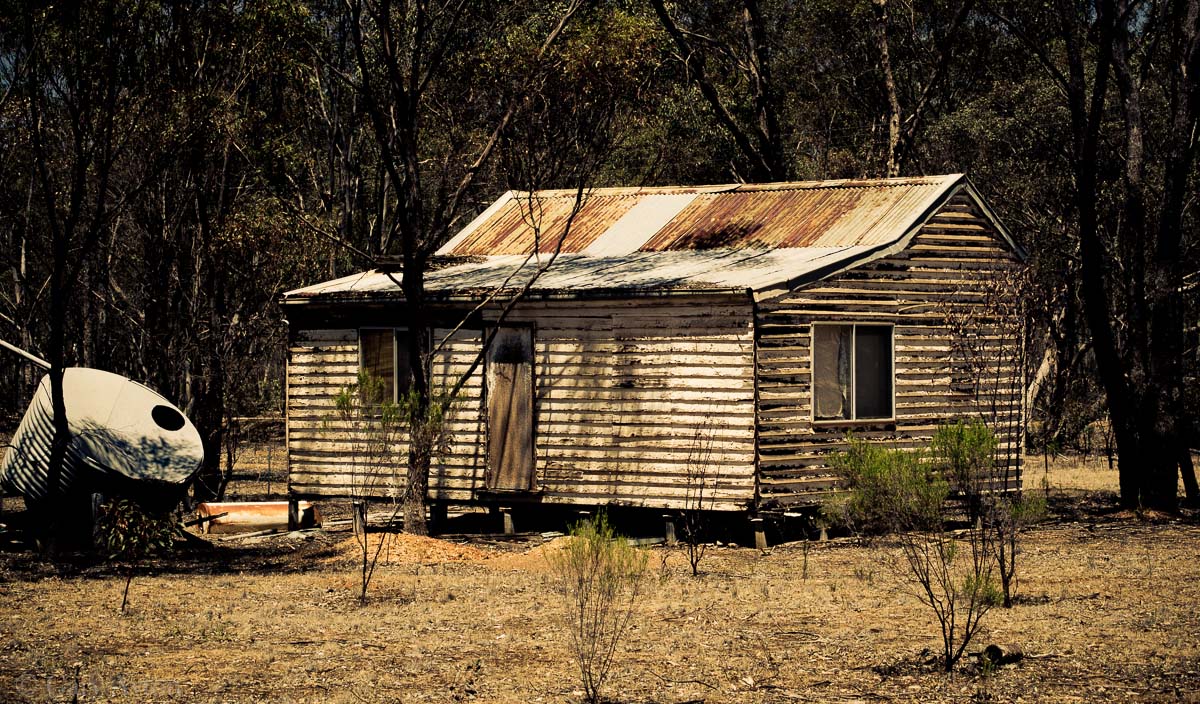 and just south of Dunolly is the old gold rush era Wighams Junction Hotel built between 1862 and 1867 to serve the Gooseberry Hill gold mining operation. Ann Wigham was the licensee when it opened and the large sign sprawled across its facade read Ann Wigham’s Junction Hotel. The Wighams also ran a nearby corn store. The hotel was a popular meeting place and a venue for indoor and outdoor sports. It was extensively damaged in 1910 and was de-licensed in 1912 (Olympus mZD 12mm f/2 lens at f/6.3). 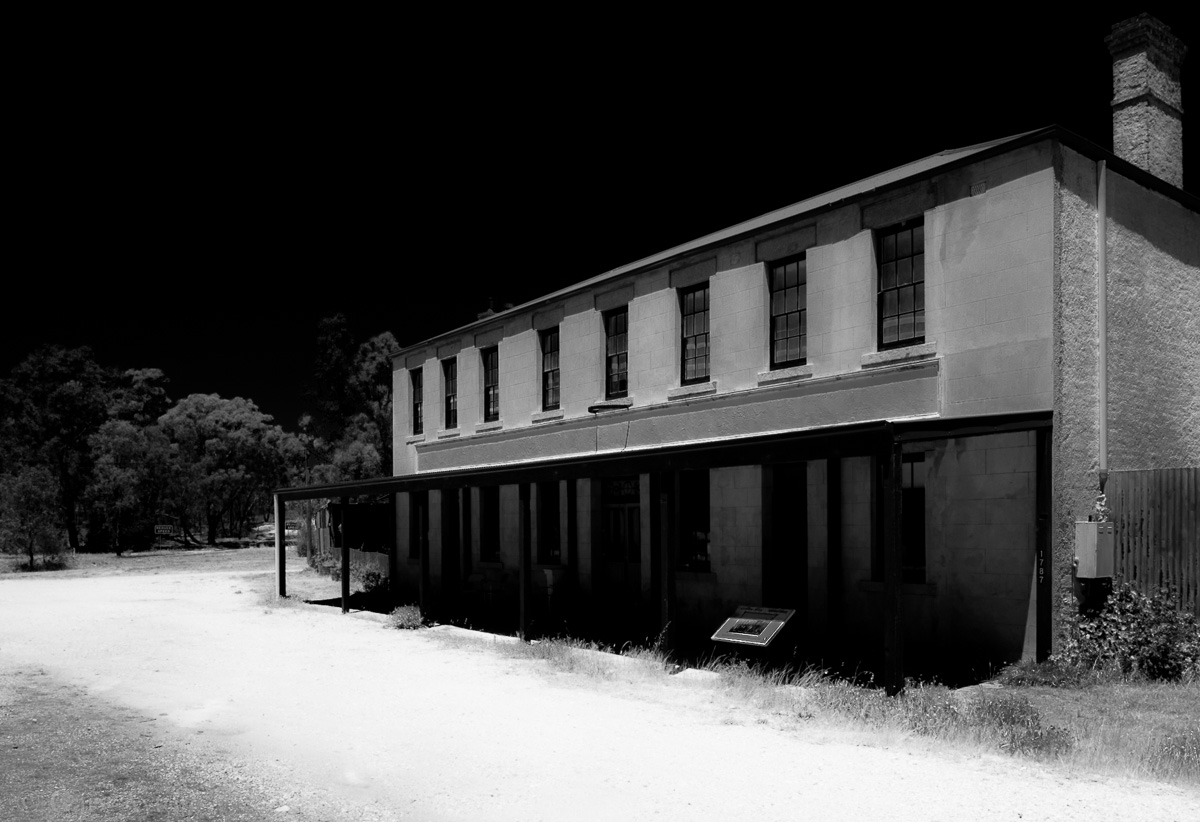 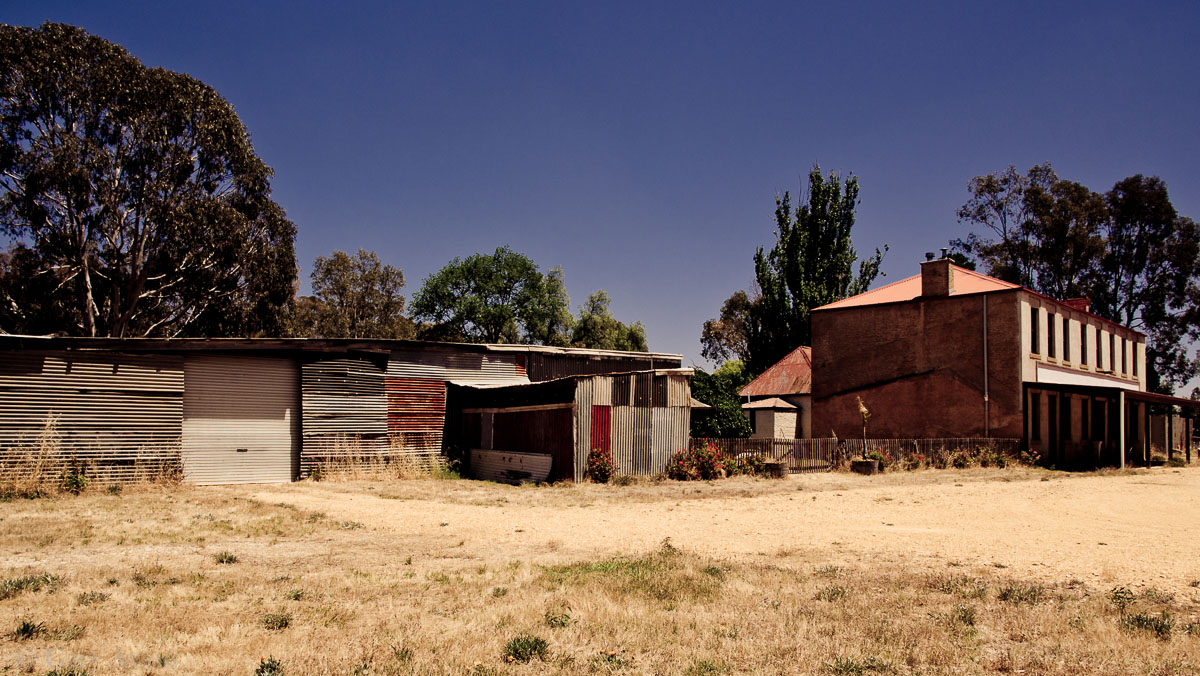 Next stop .. the awesome little gold rush town of Dunolly…..