Ahh… I can hear the bugler boy playing “The togs last post” as the photographer lies helpless, banished to the man flu couch for 2 nights in a row with soaring fevers from a potentially nasty many flu for which there are apparently no treatments but “supportive care”. But “supportive care” is no where to be had.

The family try to offer helpful advice such as “stop groaning it isn’t that bad” – but none of them have a Y chromosome so they wouldn’t really know how much suffering it causes.

Last night I even became delirious with the fever – I knew it must be a delirium for two reasons:

To prove how high my fever was I raided the family medicine chest where I found a thermometer marked “For PR use only” – don’t know where my wife gets these promotional use thermometers but she may as well throw it away and buy one of those new forehead ones – it’s impossible to keep your mouth shut for 5 minutes when you have a blocked nose!

Chapter 2: Why do guys with man flu become delirious so easily?

Well I am not altogether sure, but I suspect it has to do with the relative lack of neural connections in the brain and that large proportion of the brain devoted to the empty box.

Yes, my wife discovered the existence of this neural empty box when we had the hole dug in out ground for my tiny pool, I would spend hours just staring into the hole while she ran around frustrated and doing all the chores to which I was totally oblivious.

Apparently women do not have such a capacity to do nothing and think nothing for hours on end let alone for seconds. Guess this is why Mindlessness is all the rage – trying to get women to develop this box.

Men do rely on a few neural connections from this box to the reality box so they can keep checking and deciding if what they are experiencing is real or not – and a malicious virus like man flu can disrupt this and we are left with delirium.

The women of the household just don’t understand how much suffering it can cause, my wife even suggested it is no where near like having a baby – but she only had two panadol tablets when she was in labour and I have had to have so much more  and have had to add in nurofen, so my suffering must be more, plus us guys don’t get the benefit of those endogenous opiates of pregnancy to ease the suffering.

And I don’t think they comprehend how hard it is to breathe through blocked nostrils while trying to sleep. Breathing is not too bad lying on one side as the upper nostril becomes unblocked while the lower one becomes block, the issue is the transition period when you roll over – both become blocked simultaneously and I awake with the same feeling of impending doom as I get when I get water up my nose in the swimming pool and I can’t reach the edge – it is for this reason my pool is small so I am never more than 1.5m from an edge in case I start drowning – this meant I could make the pool 6″ longer so I wouldn’t hit my head at the end while doing laps.

I even thought of going to the local hospital to get “supportive care” – but they seem to always ask the question that photographer’s dread – “Have you been traveling recently” – as if a photographer has not been traveling – but to answer this truthfully, you will end up in isolation with swabs taken from every orifice just in case you have a less deadly disease than man flu such as swine flu or MERS or whatever it is called – no thanks! That’s not for me!

I guess you can’t blame the staff after one patient who had MERS and only a 50% fatality rate managed to infect 82 people after going to the ED in South Korea last year.

So I write this potentially last post in a rare lucent interval between deliriums.

Chapter 4: is this really the end?

And if it is my last post, please let my loved ones know that my camera gear is actually quite valuable despite how much they resent it, so it might be in their interest to sell it for market price instead of taking it to the trash and treasure markets, or worse, consigned to the rubbish tip.

Oops, here comes another sneezing bout – if you remember, it was exactly 12 months ago that I last had man flu, and although I was lucky to survive that one, I didn’t come away unscathed – a nasty sneezing bout whilst sitting resulted in an incapacitating lumbar disc prolapse which almost stopped me going to the Red Centre of Australia.

Yes friends, never take things for granted, and make the most of the time you have. 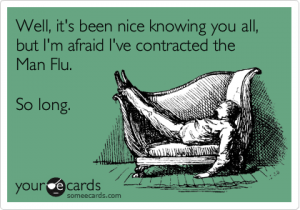 Apologies for the graphic details, but I felt it was important to elaborate to convey how much suffering us men folk go through and hopefully fight the lack of empathy for this condition which is clearly shown here: While all this is tongue in cheek, there is research suggesting men are more vulnerable to chest infections as oestrogen is apparently protective – see here