Here is what can be achieved by taking your camera with you everywhere and you happen to bring the Olympus E510 with the very sharp Olympus ZD 50mm f/2.0 macro lens.

Yesterday I was asked to take this photo of a person’s eyes which were stained with a dye to show up lesions on the cornea when lit with deep blue light from a slit lamp in a dark room.

This requires a bit of pre-planning but is very possible with the above set up as long as you take the time to adjust a few settings.

First, AF is going to be a pain in this low light condition, so just set focus to the closest distance possible and lock it there (eg. in bright light use AF to lock it on something close then change to MF setting to leave it there). In general, manual focus is best for macro work anyway.

Second, you need a reasonable amount of depth of field and thus I settled for f/5.6 which is a good compromise as long as we can get shutter speed fast enough to stop camera shake.

Third, exposure is going to be a bit tricky given the high contrast, I decided to go with manual exposure and adjust until it looked good on the LCD, this resulted in shutter speed of 1/30th sec at 1600ISO.

Fourth, the extreme colours here needed to be portrayed accurately, so AWB was probably not going to work for this so I set WB to sunlight – given the light source was a deep blue.

Now,, we are all set, time to take the photo. Just move in and out with the camera until the eye looks sharp, then hold steady and take the shot.

Fortunately, the Olympus macro lens is image stabilised by virtue of the E510 body and thus 1/30th sec is easily within its realms of capability for a 100mm effective lens in 35mm terms.

Had I used a Canon 40D with a Canon EF 60mm macro lens to achieve this, I would have needed a faster shutter speed which would force me to ISO 3200 &/or drop aperture to f/4 (much less DOF given the larger sensor size as well). Unfortunately, Canon do not offer an image stabilised macro lens that I am aware of. Forget that the 40D has a little more dynamic range or less noise at ISO 1600, the Olympus E510 performed as well as I needed, and arguably, better than a Canon 40D could do and for much less weight. Is this a dig at the dpreview.com review of the E520? 🙂

So, let’s see what we managed to achieve:

First, the good eye, note the only green is the pooling of the stain at the bottom of the eye: 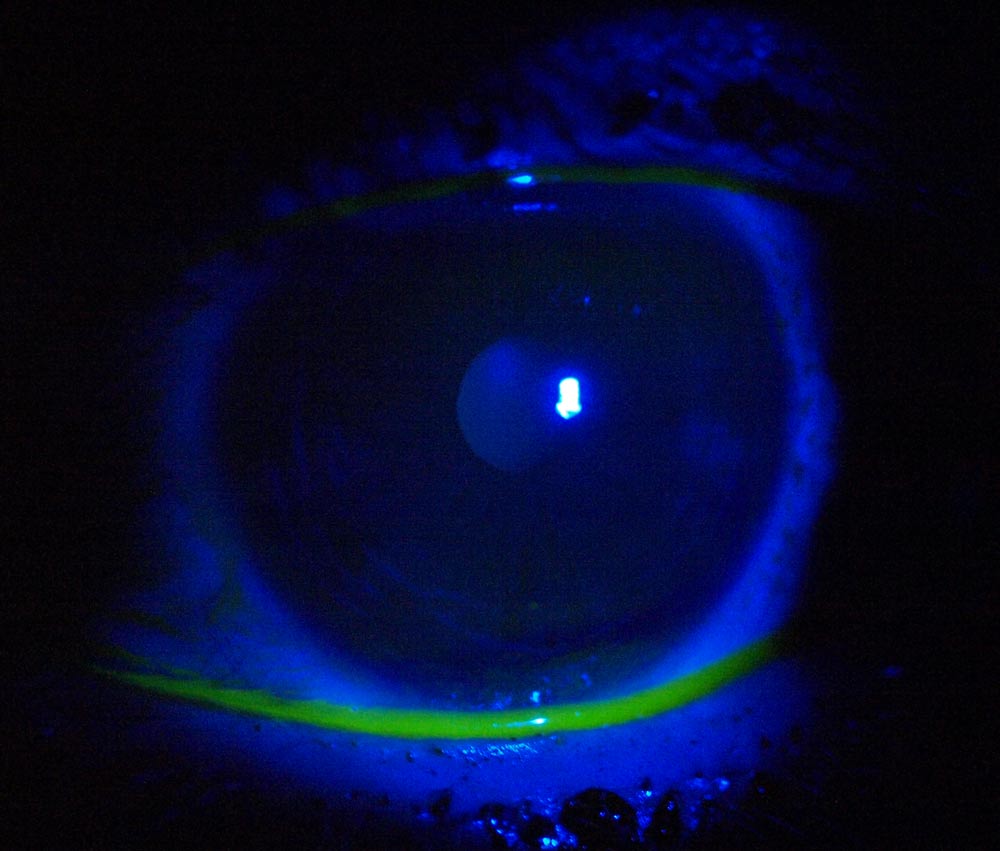 Now, the bad eye, check out all those lesions on the cornea shown up as green including scratches and petri-dish-like spots of infection lesions – I reckon I could put this image on an astronomy site and say it is a planet! 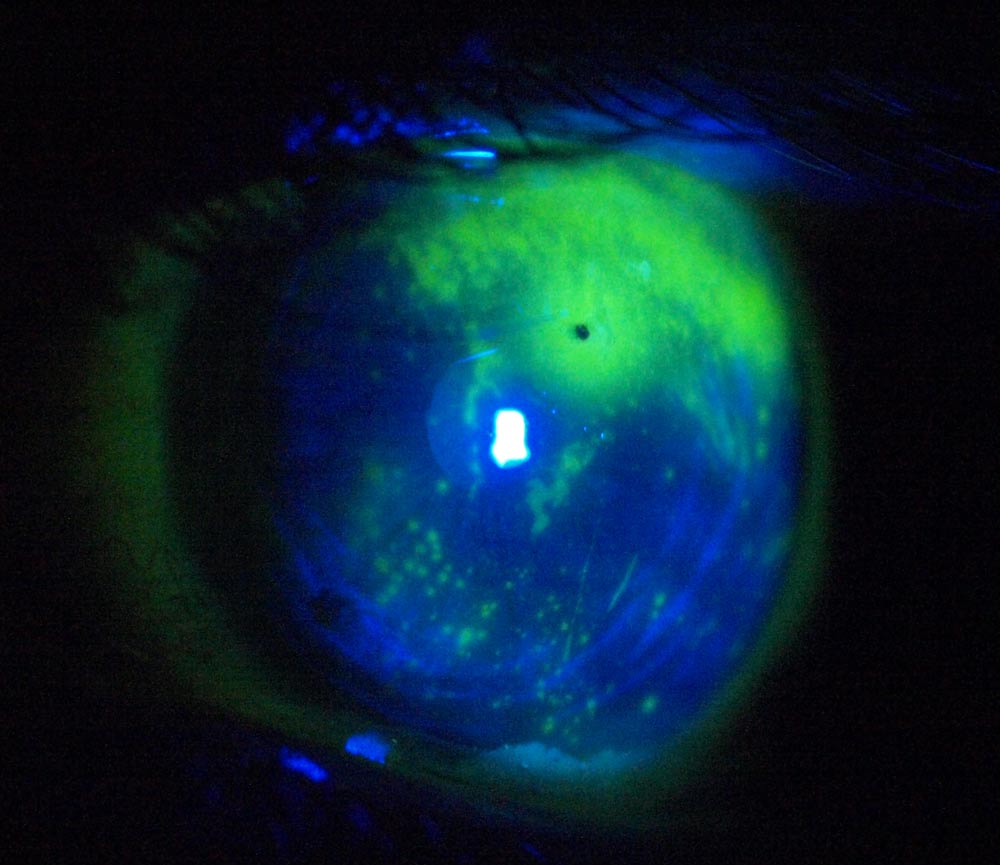 For the tech heads, the green is actually fluorescent glow from the stain when blue light hits it, for this reason, flash photography would not have been possible (although I guess it might be if you had a deep blue filter to put on your flash, and you used off-camera flash).

This goes to show that even though there is digital noise at ISO 1600 with the E510 this does not mean you should never use it and that there are situations where it can be used very effectively.

This post is partly to make my point of the previous post – image sensor quality is NOT the most important factor in cameras by a long shot – it is whether or not you have your camera there, what lenses you have available and its other functionality, in this case, of critical importance was image stabilised macro capability.

For more examples of the versatility of this E510 + 50mm f/2 macro lens combination, see here