Heat wave – a harbinger of worse to come

Have not been out much this week as Melbourne is going through its hottest heat wave on record, fortunately things have cooled down today and we only are expecting temperatures in the high 30’s degC.

We had 3 days in a row in higher than 43 degC (a record for Melbourne) including a top of 45.1degC (2nd hottest on record, and this comes after a month of < 1mm rainfall following 12 years of drought. A quick shot of a Melbourne sunset at the peak of the heat wave. 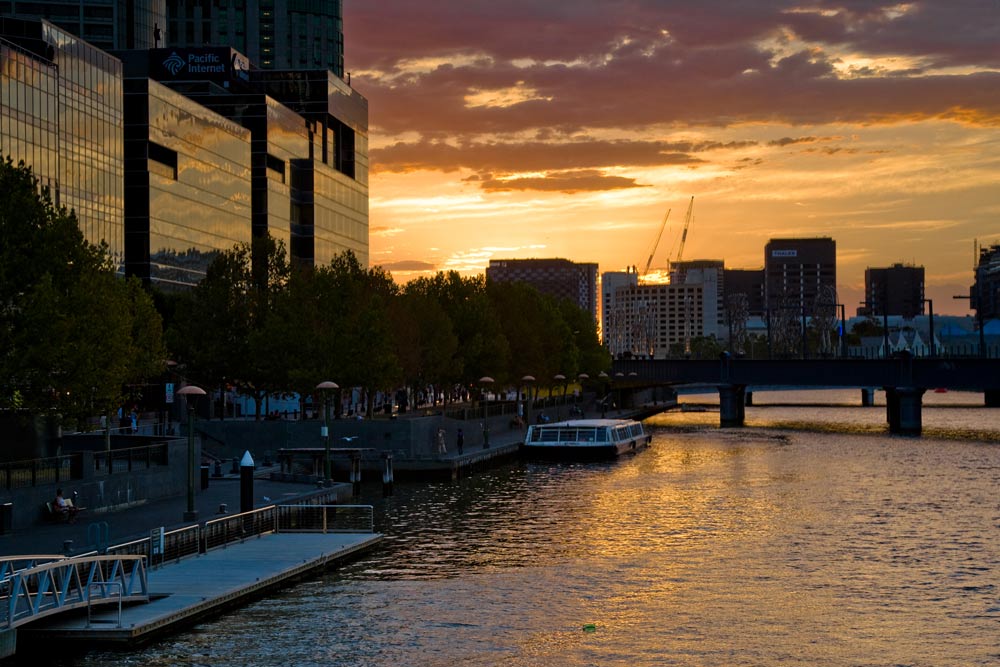 Fortunately there is a little reprieve with the next 7 days forecast to only be in the low to mid 30’s and the heat is bearable as there is little humidity.

Most of us have air conditioners but these don’t help when the electricity supply goes down due to excess demands or in my case when it went down for 18 hours at the peak of the heat when a local transformer over-heated.

I was lucky in that I had to work most days indoors in an air conditioned environment, but commuters felt the heat as the urban train system practically came to a stand still due to combination of failing air conditioners on trains, tracks buckling in the heat and then the power cuts.

The tennis players at the Australian Open had to endure their hottest Open tournament yet, and to top it off, last night’s semi-final men’s game went for over 5 hours – a record for the tournament!

Construction workers took the week off and headed to the beach as their rules give them a day off if it hits 35degC.

Many slept on the beaches overnight to cool off, and fortunately only a few elderly appear to have suffered enough to require medical treatment.

It was a different story for wildlife – Melbourne’s population of flying foxes (bats) fell from the sky as they died en masse in the heat – ringtail possums fell from trees – kangaroos too exhausted to jump fences – Melbourne’s Plane trees dropped their leaves prematurely.

But most importantly, the usual fierce hot winds associated with such weather has been limited and major bush fires have not eventuated thus far apart from one in Gippsland and another small one which threatened Melbourne’s power supply.

So we can all be grateful that things were not as bad as they could have been and although our water supplies are the lowest in 30 years, we still should have enough to last us until the drought breaks (if it ever does) or the desalination plant is built.

Once known as the Garden State, Victoria’s long drought has savaged our gardens – few have lawns worth looking at (we have not been able to water lawns for the past couple of years), some replace them with artificial lawns and plastic pot plants. Most trees are drought-stressed and the majority of birches have died in the past 12 months.

But this is nothing compared to the hardships of those in Africa whose crops have failed for the 2nd season in a row due to drought and now face famine in an economic environment of rising global food prices and shortages with little hope of real help from economically struggling and increasingly inward looking “wealthy” countries who are likely to become less charitable to others in need.

see some of my photos of Victoria and Melbourne here

and… as hot as Melbourne’s heat wave has been, it was not as deadly and prolonged as that in Adelaide, the state capital of South Australia which ended up having almost 2 weeks of consecutive days greater than 40degC – see here.

post script: The Age Feb 22nd reports that in fact it appears there were at least 100 excess deaths in Melbourne and over 200 excess deaths in south-east Australia during those 3 days of heat – mainly of elderly with cardiac failure who were found dead in their homes.

It proved to be a harbinger of worse days ahead – and an omen that life will be more extreme this century unless man can reverse the damage he has done.

Our rainfall in south-east Australia is dependent on La Nina and El Nino events, but recent research suggests that ocean currents in the Indian Ocean called the Indian Ocean Dipole – “positive Dipoles” can over-ride the potentially rain inducing La Nina events – and this is what has happened in the past 3 of these – no rain just prolonged drought. Positive dipoles were also responsible for the droughts that ruined thousands of outback pioneers at the start of the 20th century and the drought that spanned World War II.

Aerosol levels over Asia reduce Asian temperatures by 1-2 degrees Celsius and this change in the distribution of surface temperatures can force changes in wind direction and ocean currents and forces more heat into monsoon winds over NW Australia and increases high pressure systems in southern Australian which produce hotter, dryer conditions.

meanwhile, northern Queensland is lashed with floods from cyclones (Townsville receiving 242mm rainfall in 48hrs which is half Melbourne’s ANNUAL rainfall) and London is brought to a standstill by the worse snow conditions in 20 years.