OK, the Panasonic GH-1 is NOT in the same league for video capability for sports when compared to a Sony EX-1, or a RED video camera, but then it is about 2-10% of the cost, size and weight of these cameras and so can play a significantly different role.

Last night, I decided to drop in on a night football game under lights and give the GH-1 a quick test to see how it would do under these demanding conditions.

I was seated in the highest tier seats quite a long way from the action, and certainly not an ideal position – here is a shot from my seat using the GH-1 mounted to the Canon EF 17mm TS-E tilt shift lens (as usual click on it to open a larger image) – remember, in 35mm film terms, this is actually a 34mm field of view not 17mm – so you can see I was a LONG way from the action: 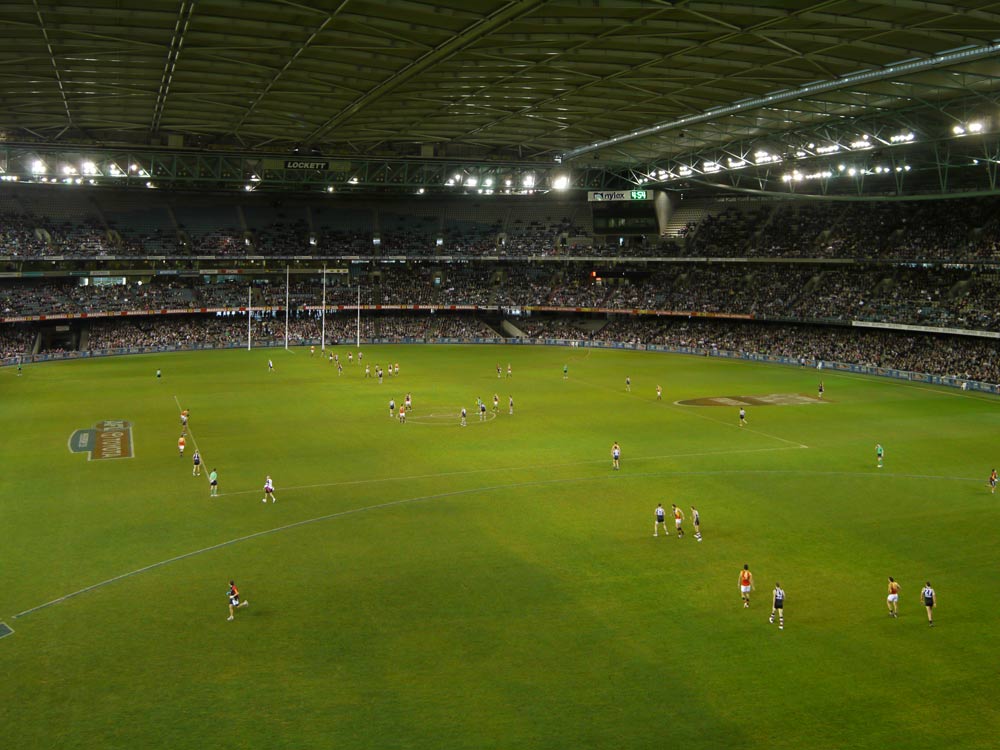 The first video I shot of the St Kilda players bursting through their banner at the other end of the ground – some 200m away, was unfortunately a bit jerky due to my poor panning technique hand held, BUT it shows how good the 2x digital zoom is in video mode. This video has a 35mm equivalent field of view the same as if one was using a 546mm f/5.8 super telephoto – but all I had was the compact, light GH-1 with Lumix 14-140mm HD lens – quite remarkable!

These videos were taken in motion jpeg at 1280×720 at 30fps then converted by YouTube into their format. Sound is via built-in mic. This was with v1.0 firmware – I have not yet updated this to v1.1 which should give even smoother movies and AF. Furthermore, the 720p AVCHD video mode with its 50 fps capture should give a smoother result for action as long as the panning is not too fast and there is not too much background detail (grass should be OK), as this combination causes artefacts in AVHCD.

PLEASE NOTE: If the videos look blocky on your screen, it is because of the YouTube conversion, and you certainly don’t get to see the videos how they appear on my computer at full 1280×720 resolution.

You would have to agree, very impressive for such a lens and telephoto reach.

At half-time I decided to walk to the bottom level and take a couple of shots from the back row.

First, here is an example of how surprisingly fast the contrast detect AF is. I saw the ball coming to my side of the ground and quickly turned the camera on (already zoomed to 140mm and in Manual metering mode at ISO 3200 with AF mode in single central AF area), and before I could see anything in the EVF I had half-pressed the shutter for a split second hoping AF would kick in, and then pressed the shutter. Not an ideal way to take a shot, but look how good it came out: 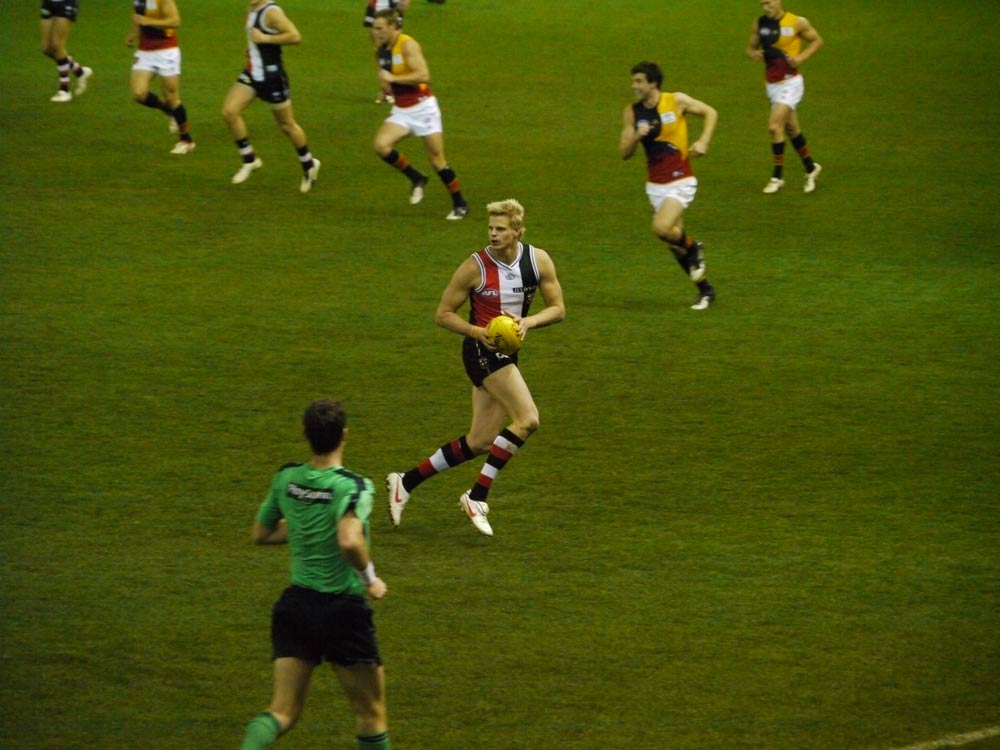 Now, you have to admit, that is pretty good AF and what noise at ISO3200? Who cares about it?

When you can achieve this at 280mm telephoto reach with such a small package, noise at high ISO just doesn’t matter! The best camera will always be the one you bring with you.

Now for a demonstration of poor novice panning and with no digital zoom this time, but this video demonstrates that the GH-1 can AF for sports during HD video, and, with a little practice, you can manually zoom and then re-acquire AF. No dSLR such as a Canon 5DMII or Nikon D90/D5000 can do this (of course if the action wasn’t as fast and the people closer, I could have used face detection AF as well).

So, if I can manage to do videos like these, anyone can!

One day I might learn a bit about videography and do some really nice videos and make use of the GH-1’s shallow depth of field and ability to use Lens Baby lenses, etc.

The firmware updates for the GH-1 and for the Lumix 14-140mm HD lens can be found here.

It would be nice if Panasonic would update firmware to add a few extra movie mode options: