Following on in my series of Victoria’s beautiful, remote Wilsons Promontory National Park, here is a blog to encourage you to stay in the park overnight rather than just do a day trip.

For a start, a day trip from Melbourne is a good 2.5-3hrs drive each way and in the southern parts, there are risks if driving around sunrise and sunset of hitting wildlife – although this risk is extremely high within the park – although the speed limit is 80kph, you probably should do 40kph once the sun is setting and well into the night. On one short drive of 2km at night I saw several wombats, several wallabies, and a young deer – and all of these are liable to suddenly run in front of you.

Vic Parks who run the park advises all day visitors to vacate the park by sunset – this means if you want great sunrises and sunsets within the park you really need to stay overnight.

But be warned, in Tidal River camping ground whilst there is plenty of space off season with over 400 sites it is usually full in peak season – but even off season there are about a dozen wombats who will destroy your tent if they smell food or shampoo, etc inside – they do have nasty sharp claws and can open eskies!

I heard a wombat gnawing on grass near my head while I slept but thankfully he ignored my tent. 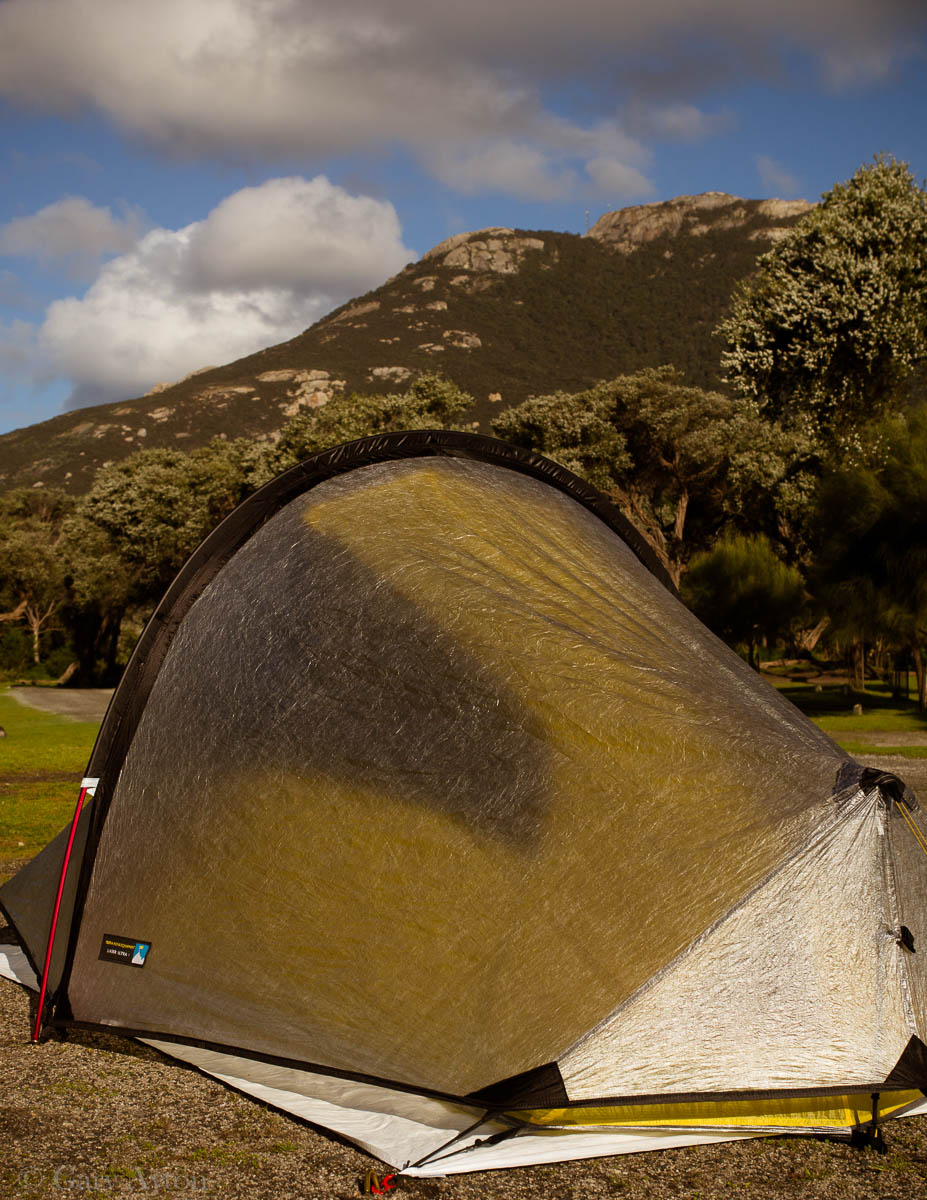 My tent with Mt Oberon in the background – see how nice the camp ground is when it’s empty off-season!

The showers in Tidal River have lovely hot water and are cleaned daily but I checked out the other main camp site at the entrance – Stockyards and whilst it is fitted with a nice shower, the hot water was not running.

You can drive or catch a shuttle to the Mt Oberon carpark, and thence there is a 3.4km 1hr steady ascent of 359m along a shaded gravel road which meanders up on the south-east aspect to the rocky, windy and chilly summit which culminates in the last part being steep steps which can be slippery – bring warm clothes, gloves, jacket and torch as well as your camera with ND gradient filter and your tripod – unless you own Micro Four Thirds and then you could probably get away without a tripod thanks to the image stabiliser but your hands will be cold and tremulous so  a tripod is a better idea for serious work – even then the wind will make longer exposures problematic.

I thought I was going to be greeted with a really nice sunset however distant cloud on the horizon blocked it – nevertheless I did get a couple of nice shots. 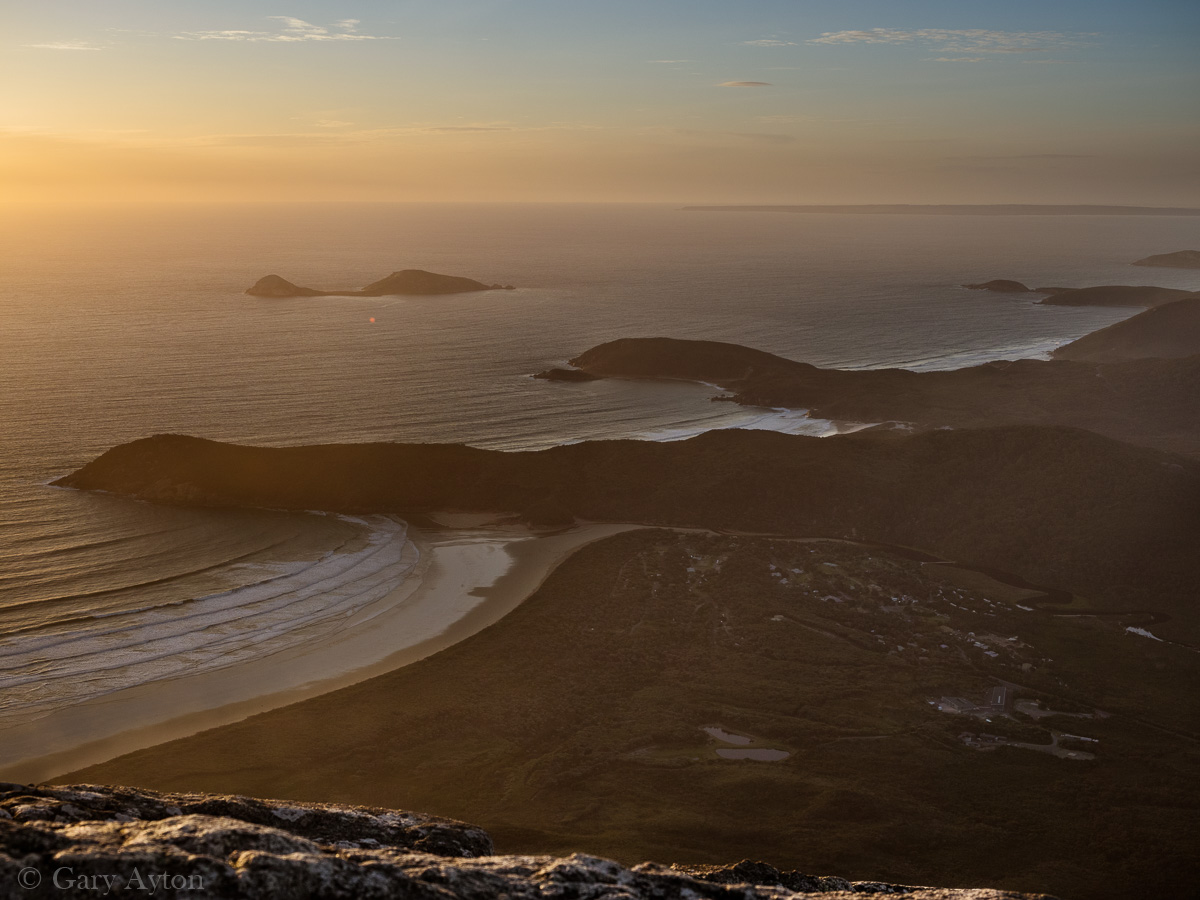 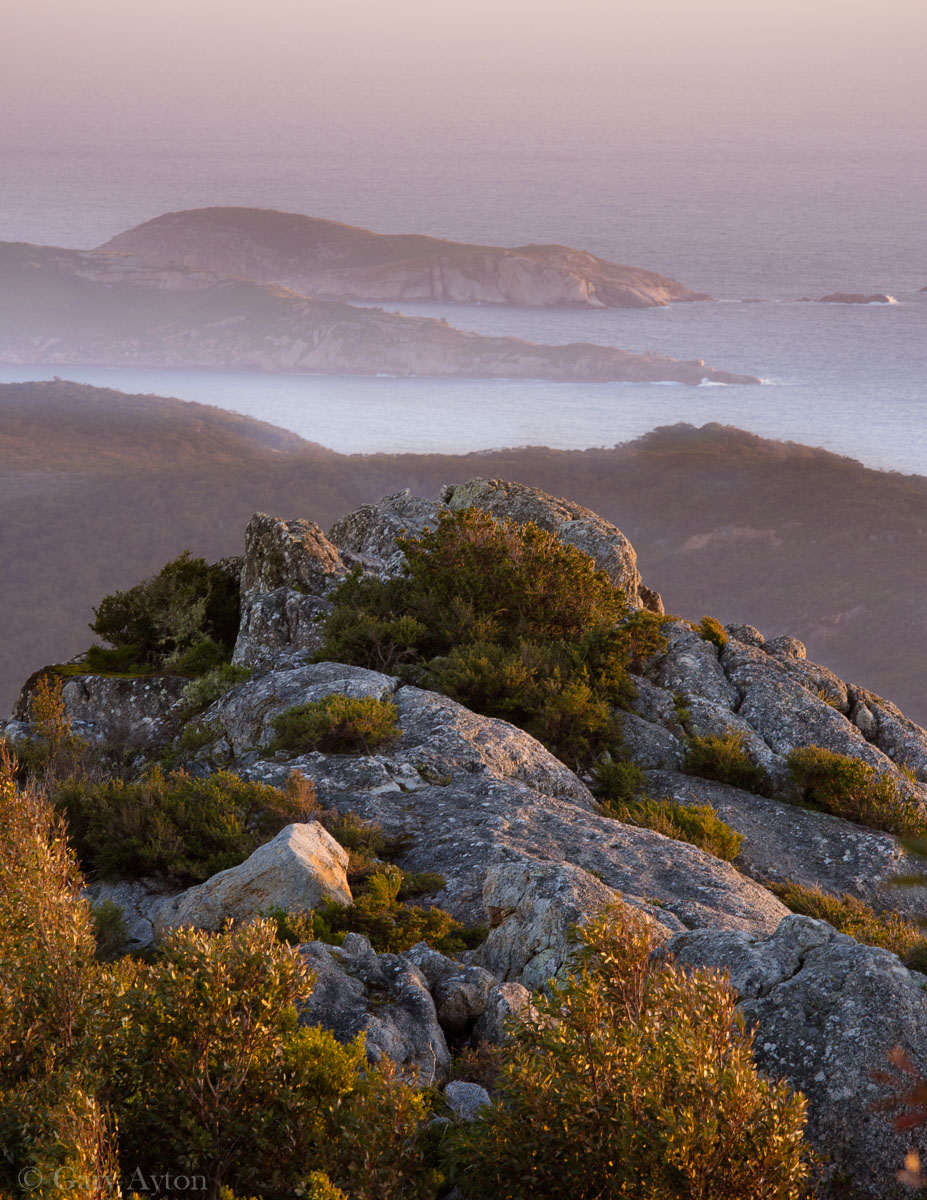 Looking south – one could walk to this knoll and have a great sunset portrait opportunity – but being solo, this was not going to work for me – and anyway I was recovering from the ascent!

The descent is much quicker and can be done without a torch if you don’t stay too long after sunset, but take care walking down the initial steps, the rocks and wood are slippery when wet – hold onto the railing!

Wilsons Prom is a long way from city lights and has lovely dark skies – if it is not cloudy which is a high probability down there!

I timed this visit to ensure there was no moon in the sky at 2hrs after sunset then I could head to a beach – Tidal River is easiest and avoids any need to drive on the roads with the wildlife risks – check the tides though – high tide can be more problematic.

October is a great time as the core of the Milky Way arches over in the west from the Southern Cross and to Scorpio which, along with Venus (the really bright star) is setting later in the evening. Cape Liptrap lighthouse is visible across the bay. 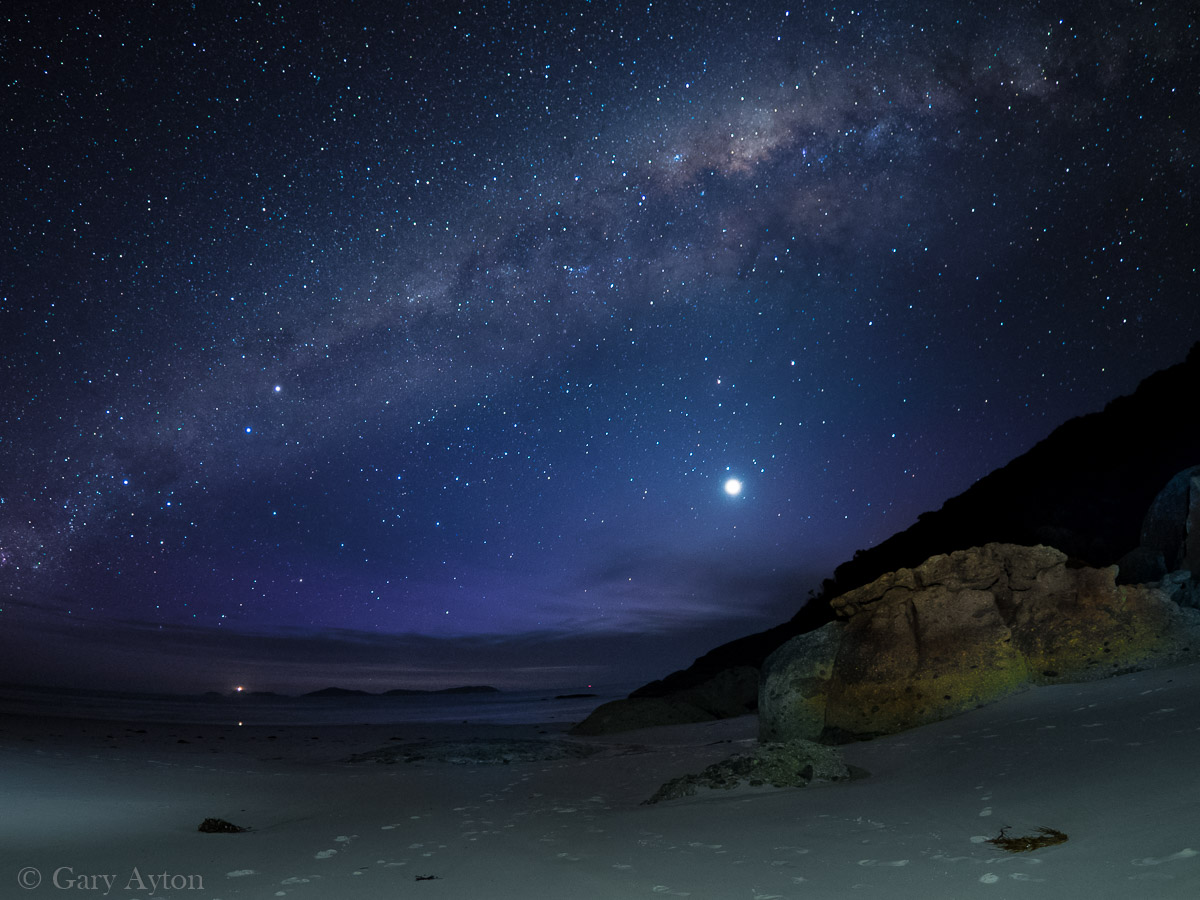 This is a cropped version taken as a single shot with the Olympus OM-D E-M1 with the unique Olympus mZD 8mm f/1.8 fisheye lens at ISO 1600, f/1.8 30secs but with a touch of dew on the lens as I discovered later.

Early morning sun on the boulders and sand:

I was really tired and missed sunrise but still, the early morning sun provides a better direction on the Tidal river boulders, especially better if it times with the tide having just gone out as it had done for me, leaving newly formed pristine textures in the sand. 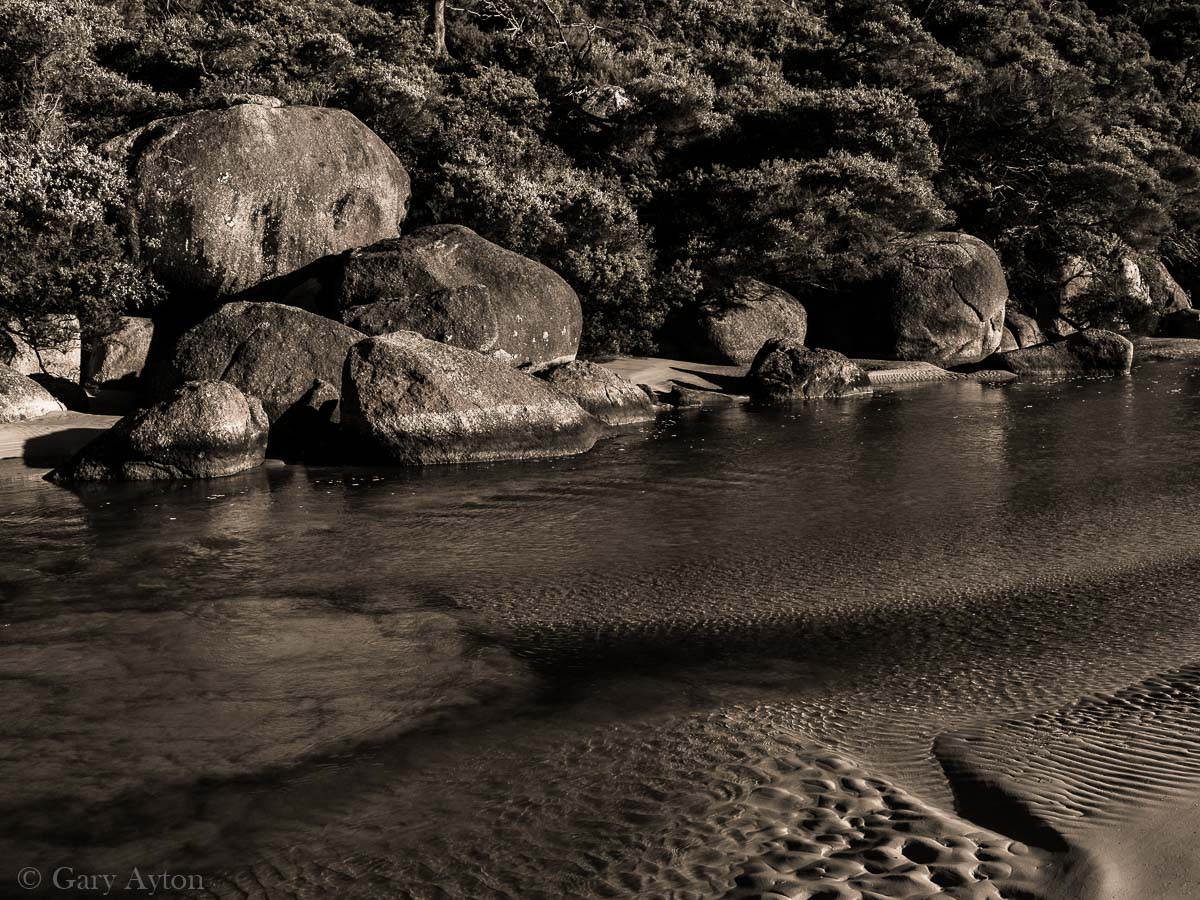 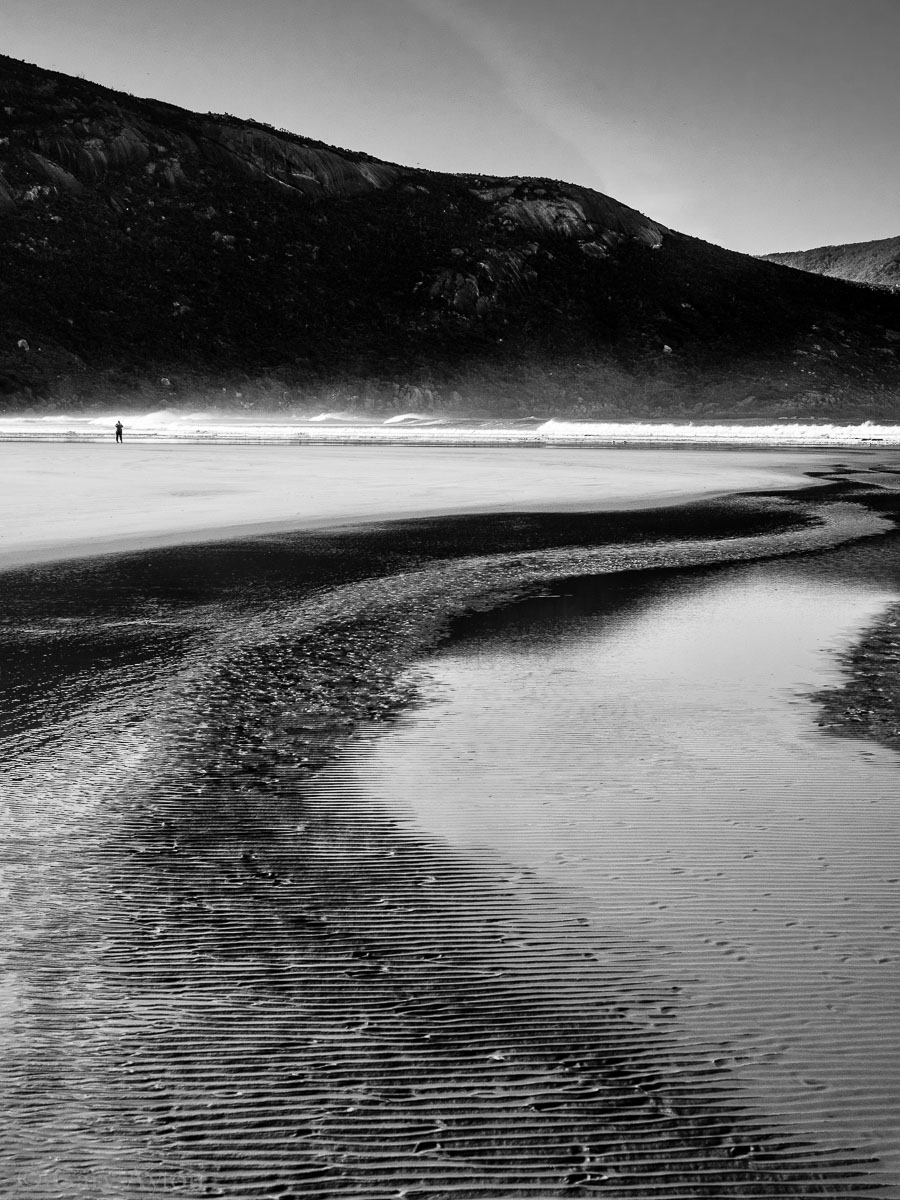 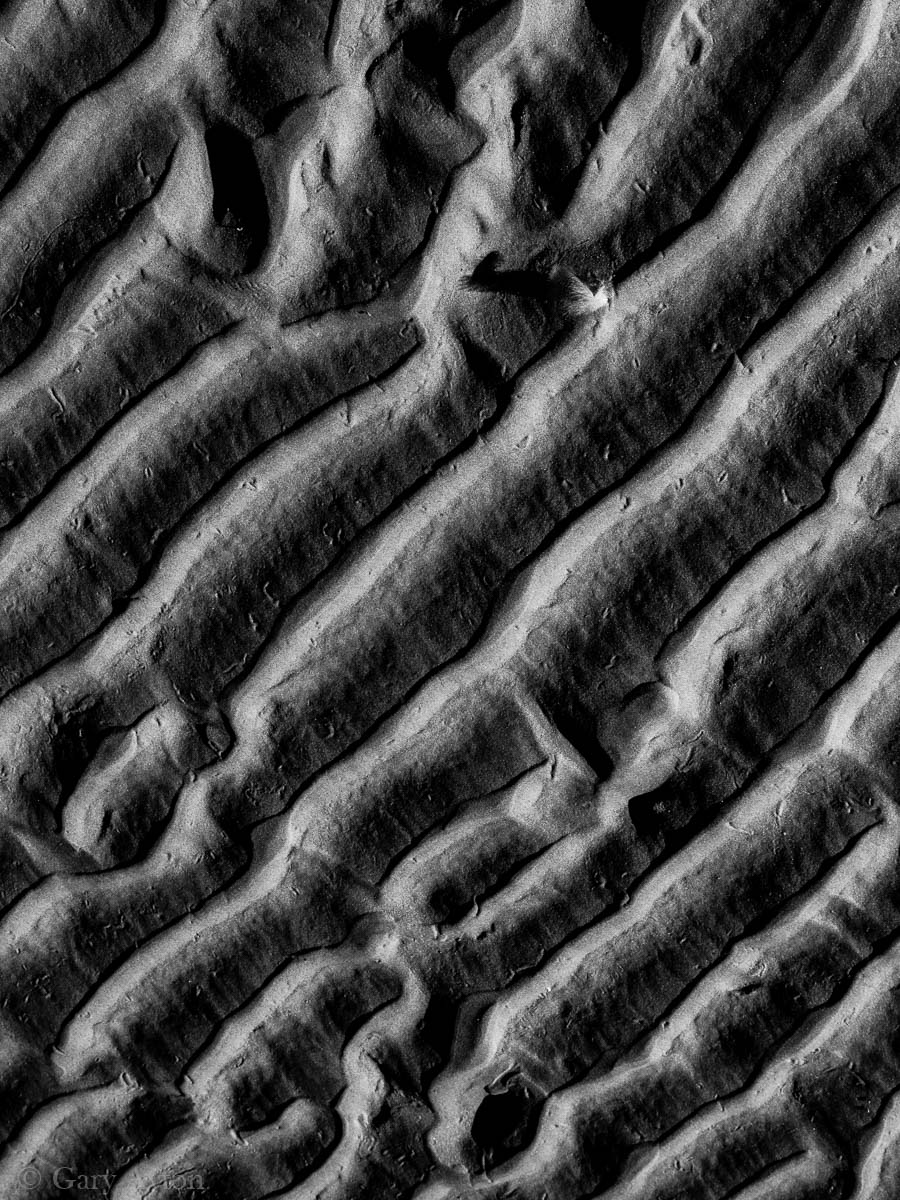 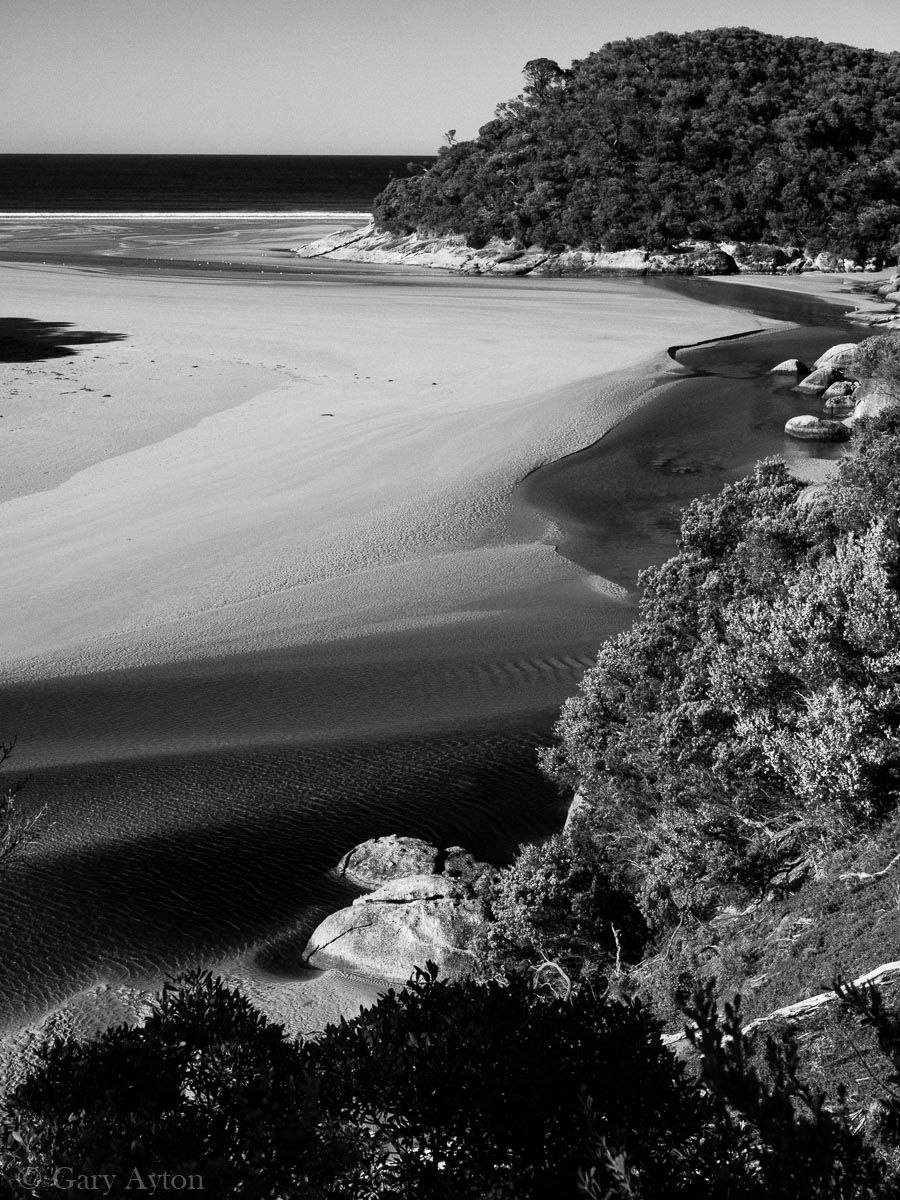 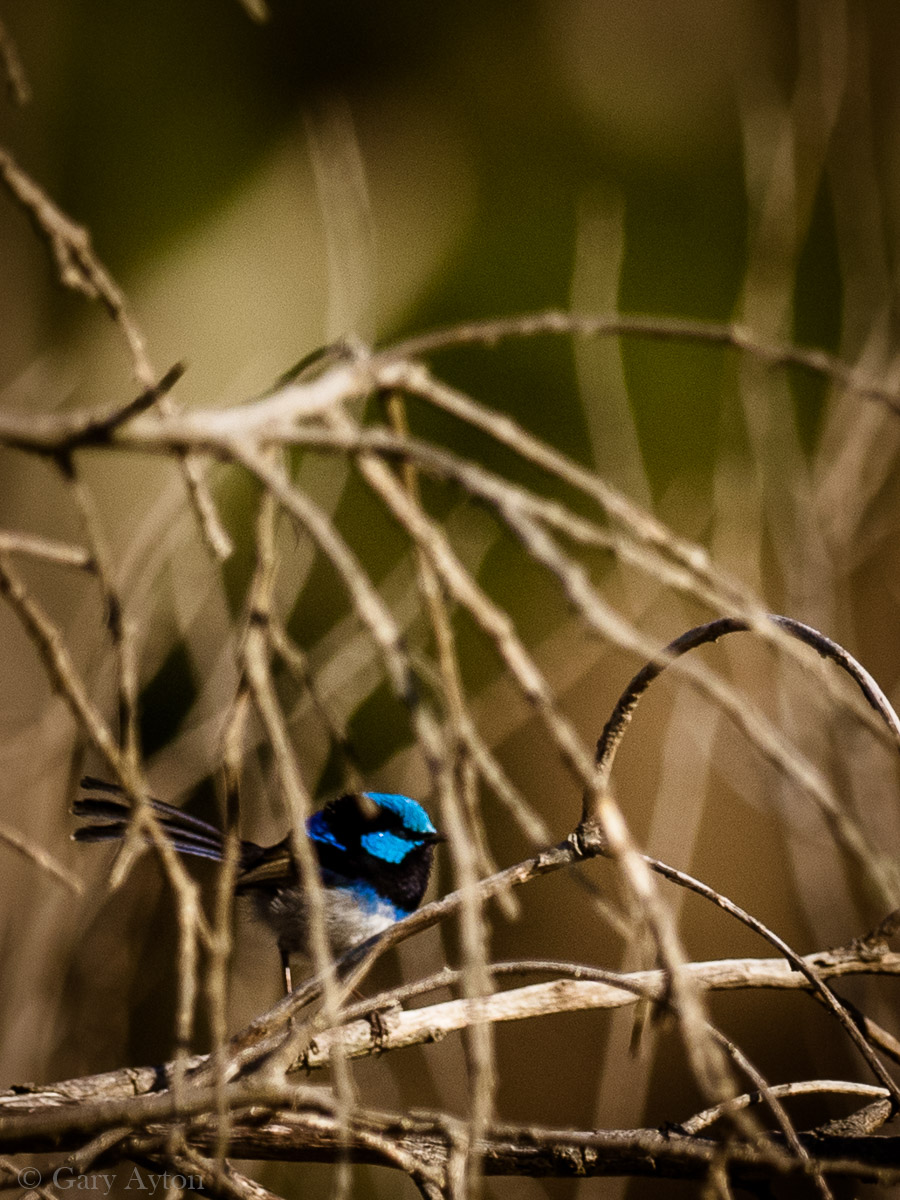 Plus, it is a great time for a stroll around and opportunistic capture of some birds such as this superb fairy wren while you are at it before you go and have breakfast and that lovely 4 minute hot shower before heading out for some more morning walks along other beaches – see next post here – the beaches re-visited.

No where else in the world offers beautiful remote beaches with lovely colored granite boulders to photograph, explore or just sunbake on (oops that’s bad for you!), nice sunsets, beautiful Milky Way winter-spring astroscapes without sub zero temperatures and unique Australian wildlife all around – emus, wombats, kangaroos, wallabies (thankfully the snakes seem to be not too plentiful but I hear they are around on the overnight hikes such as down to Waterloo Bay).

I would avoid the Stockyard Camp ground to camp in if possible though – seems to have much more mosquitoes, lots of noisy cockatoos, no hot shower (at least when I visited), is 30minutes drive to Tidal River and 20 minutes drive to the closest nice beach, and no cafe – but it would be great if you want sunrise or sunset shots on the Big Drift sand dunes.