Having just purchased the Orbis ring flash accessory for speedlights (flash units), its time to work out how to best use it as a fill-in flash scenario for portraits on location.

My plan is to use a Canon 580EXII speedlight inside an Westcott Apollo umbrella softbox attached to a radio trigger in manual exposure (can’t afford the new TTL capable Pocket Wizard or RadioPoppers..yet..) to act as the key or main light, and a second Canon 580EXII attached to the Orbis and a radio trigger and used around the lens to provide almost shadow-less fill light. The radio transmitter will sit in the hotshoe of either my Canon 1D MIII or my Olympus E510.

If I had an Olympus FL50 flash, this could have been used instead of the 580EXII as the Orbis will fit most modern flash units (but not older flashes such as the Metz 45 series), and any flash could go into the softbox, although preferably be attached to an umbrella clamp.

As mentioned in my earlier blog on fill flash options and the Ray flash and Orbis, The Orbis results in some 6 stops of light loss according to my calculations!

On testing the Orbis with the 580EXII set to 1/2 power and zoom set to 105mm (as recommended), the resulting metered exposure is f/2.8, ISO 100 at 1.7m – almost precisely 2 f stops different in light output, and very manageable for my portrait purposes.

If I choose to shoot at f/4, ISO 100 then the above distances will give me 1 stop fill-in and there is room to move to adjust the fill ratio either by moving one or the other in or out from the subject, or adjusting the power settings.

If I choose to shoot at f/8 (2 f stops more light needed) for sharpness and depth of field, I can either:

If I choose to shoot at f/2 for shallow depth of field (2 f stops less light needed), I can just power down the flashes by 2 stops – Orbis to 1/8th power and softbox to 1/16th – and in the process reduce battery drain and speed up recycling time.

As we are using manual flash, a flash meter becomes a very useful tool, but if you can’t afford one of these, then you can just use trial and error with your digital cameras.

The Orbis will fit over many lenses including:

A very BIG advantage of using manual system such as this, is that, not only are the results more repeatable, it is directly transferable to any of your cameras, even old Mamiya TLR film cameras without having to adjust any settings – by the way, the Orbis internal diameter seems big enough to allow BOTH the lenses of a Mamiya although I wonder if there may be some flare as they do not protrude through the Orbis all the way.

If you really can’t cope with manual flash exposures, then you could try the Canon infrared TTL flash and use a TTL cord to the Orbis flash and set it to MASTER group A, set the softbox flash to SLAVE group B and then adjust the light ratios and hope it works. In large rooms or outdoors, or when there is loss of line of sight between the flashes, the softbox flash may not trigger using infrared.

Alternatively, if you are well-heeled and can afford a bit of luxury in a recession or you have them for your pro work, the new and expensive TTL capable radio triggers such as PocketWizard FlexTT5 or RadioPopper PX MAY make your life easier – see my blog on these here.

Lastly, there are some BIG problems with the Orbis you should be aware of in addition to the light loss:

Here is an image of the Orbis firing (via a reflection from my double-glazed windows hence the double image) which seems to show not only a light output difference but a colour difference from the top and bottom sections: 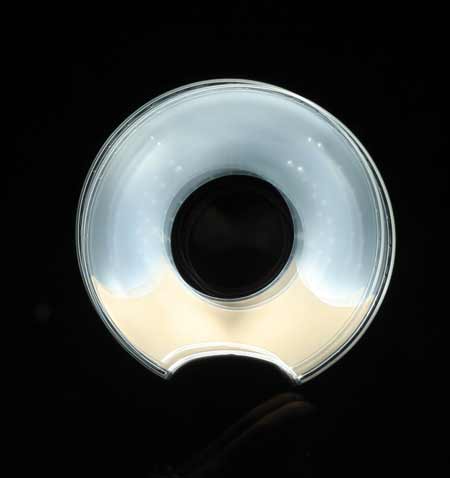 In practice this does not seem to make much difference to your image – here is a shot of a white door (under-exposed intentionally) taken with the Orbis attached to an Olympus E510 with ZD 7-14mm lens set at 7mm focal length (14mm in 35mm terms) and taken from just 10″ from the door – no PS corrections. (NB. the 7-14mm lens is very well corrected for distortion but at such close distances the corrections are not as good and there is some barrel distortion).

Bear in mind, this is extreme wide angle, and few flashes would be expected to provide coverage across the full frame – nevertheless, I suspect there is a subtle difference in colour from top to bottom. The highlights above the door handle are reflections of flourescent spot lights which should not have an effect on the remainder of the image. 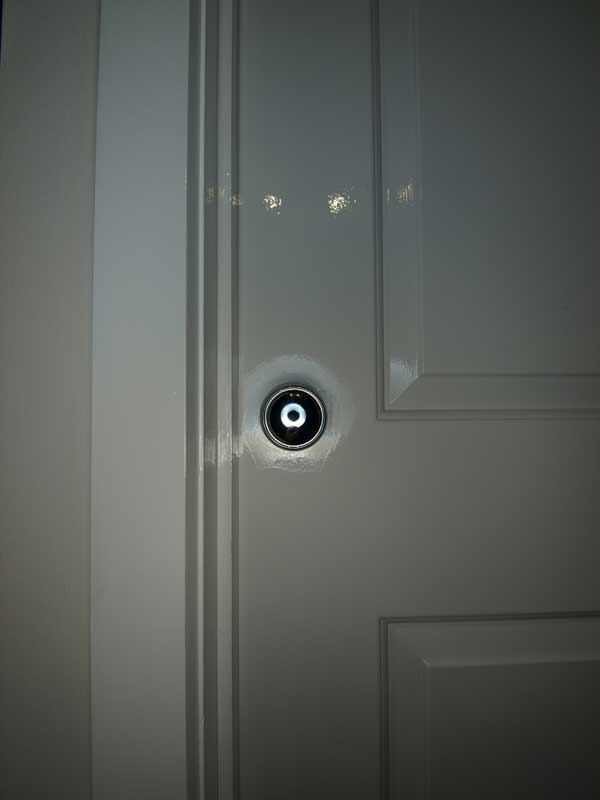 and to show how beautiful the images can be from a ring flash, here is the Orbis attached to a Canon EF 135mm L lens at f/2.0 at about 1.2m, again no PS – my TV remote never looked so good: 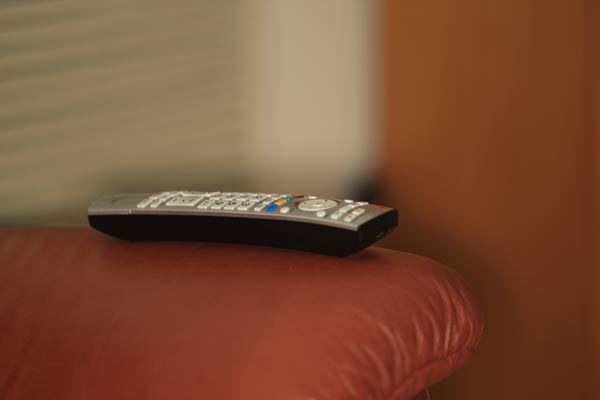 Examples of photos taken using the Orbis on Flickr.com